JEWISH JOURNAL: What I learned from Henry

Following Rep. Henry Waxman's announcement that he would be retiring at the end of his current term, Councilmember Blumenfield penned an op-ed for the Jewish Journal, offering personal reflections on Rep. Waxman's remarkable career and their long friendship:

The news that Congressman Henry Waxman would not seek re-election to a 21st term has sent shockwaves through Los Angeles. From the environmental and health activists for whom Waxman was a hero, to the pro-Israel community where he was one of the most important allies in Congress, many are mourning the loss of a great advocate for California communities in Congress, and wishing him well as he enters the next phase of a career that has been of remarkable consequence to all Americans. For me, it has been an opportunity to reflect on my personal experiences working alongside Congressman Waxman, first as a Capitol Hill staffer, and more recently as an Assemblyman and member of the Los Angeles City Council.

Elected to the California State Assembly in 1968, and then to Congress in 1974, Henry Waxman is one of the finest legislators, not only of his generation, but to have ever served in the United States House of Representatives. His retirement is a loss, not merely to our City, our State and our Country—but to the very body to which he dedicated 40 years of his life.

Few, if any legislators, have had the kind of meaningful, significant impact on the diverse range of issues that Congressman Waxman has had.

When I came to Washington in the late 1980’s Waxman was the powerful chair of the Energy and Commerce Subcommittee on Health and the Environment, and already a legend in the hallowed halls of Congress. First as a senior staffer for Congressman Howard Berman, and more recently as a member of the California State Assembly and the Los Angeles City Council, I witnessed Waxman’s style up-close, as he championed causes ranging from health and the environment, women's and gay rights, to strengthening the ties between the United States and Israel. I was working on the Hill when he famously forced the chief executives of seven major tobacco companies to swear under oath that nicotine was not addictive. He barely broke a sweat.

Please be advised that Coldwater Canyon will be closed from Moorpark St. to Ventura Blvd. on Saturday, February 1, 2014 from 8 a.m. to 1 p.m. as replacement of the 100 year-old City Trunk Line project continues.

Traffic will be impacted, particularly for those using Coldwater Canyon as an alternative to the I-405.

More info From the LADWP after the jump:

The Northridge Earthquake at 20: Lessons Learned From a Day Nobody Will Ever Forget

Twenty years ago, southern California was rocked by the Northridge Earthquake that stands as one of the costliest natural disasters in United States’ history. Centered in Reseda, its impact was felt across the City as freeways, hospitals, schools were closed. Ruptured gas lines sparked hundreds of fires.  Power was unavailable.

No one who lived through it will ever forget it, and our collective memory of it helps define us as a City. For me, it touched off the legislative effort to bring $14 billion in federal aid to the San Fernando Valley, and a lifelong commitment to promoting disaster preparedness in my community.

It’s been said the earthquake was felt as far as Nevada. I know it was felt as far away as Washington DC.  That’s where I was when I received a call from a friend at CNN who told me “your district is collapsing.” You see, I was working for Congressman Howard Berman, who represented the San Fernando Valley at the time.

With his District Office red-tagged, Howard set up shop in the old San Fernando jail, distributing water and supplies to Valley residents in need while helping to coordinate a massive relief effort involving every level of government. A seasoned legislator, he was the point person for the San Fernando Valley relief bill, and in Washington, I dropped everything to focus on that important work. Putting the bill together was an intense and challenging experience but with the help of the late Congressman Julian Dixon, the top ranking California Democrat on the Appropriations Committee, Sen. Dianne Feinstein and others, we prevailed.

Getting the money was just part of the equation, another quotient involved actually delivering the aid. I had the privilege of working very closely with the staff and leadership of FEMA, including former Director James Lee Witt, who I just reminisced with yesterday at the Northridge 20 Symposium. This was not the FEMA which was slow to respond to Hurricane Katrina; with Congressman Berman pulling the levers in Congress, a veritable alphabet soup of local, state and federal government agencies quickly coordinated together to ensure that predictions of gloom and doom in the San Fernando Valley would never come true, piecing together what would become the largest ever disaster relief package to that date.

We rebuilt. And we’re stronger than ever.

There is no greater privilege than representing the San Fernando Valley on the Los Angeles City Council. Oftentimes I am asked what advice I have for students who are looking to make a difference in their community. The answer is simple—take advantage of the myriad opportunities to engage in the process.

Our internship program offers high school and college students a unique opportunity to experience the work of a City Council office. The program exposes students to district and legislative office operations and activities of a Councilmember's work. These experiences include working with constituents, conducting community outreach efforts, assisting community based organizations, organizing civic events and projects, databases, staffing the office, and other activities.

Many legislators and senior policy staff began their careers as interns. In my own office, many of our staff started out as interns in my Council or Assembly office, including my Community Affairs Director Michael Owens, Legislative Deputy Erik Rodriguez, and Field Deputy Safi Lodin. Our newest staff member, Arielle Bernard, who handles our Jewish Community outreach and serves as Tarzana field deputy, started as an intern just last summer. Other Team Blumenfield interns have since gone on to top colleges and have had successful careers working for State Senators, Members of Congress, and even the United States Geological Service.

I was pleased to provide bus transportation for seniors at St. Mel Catholic Church in Woodland Hills to see a dinner theater production of "Because It's Christmas" at the Candlelight Pavilion in Claremont, CA. 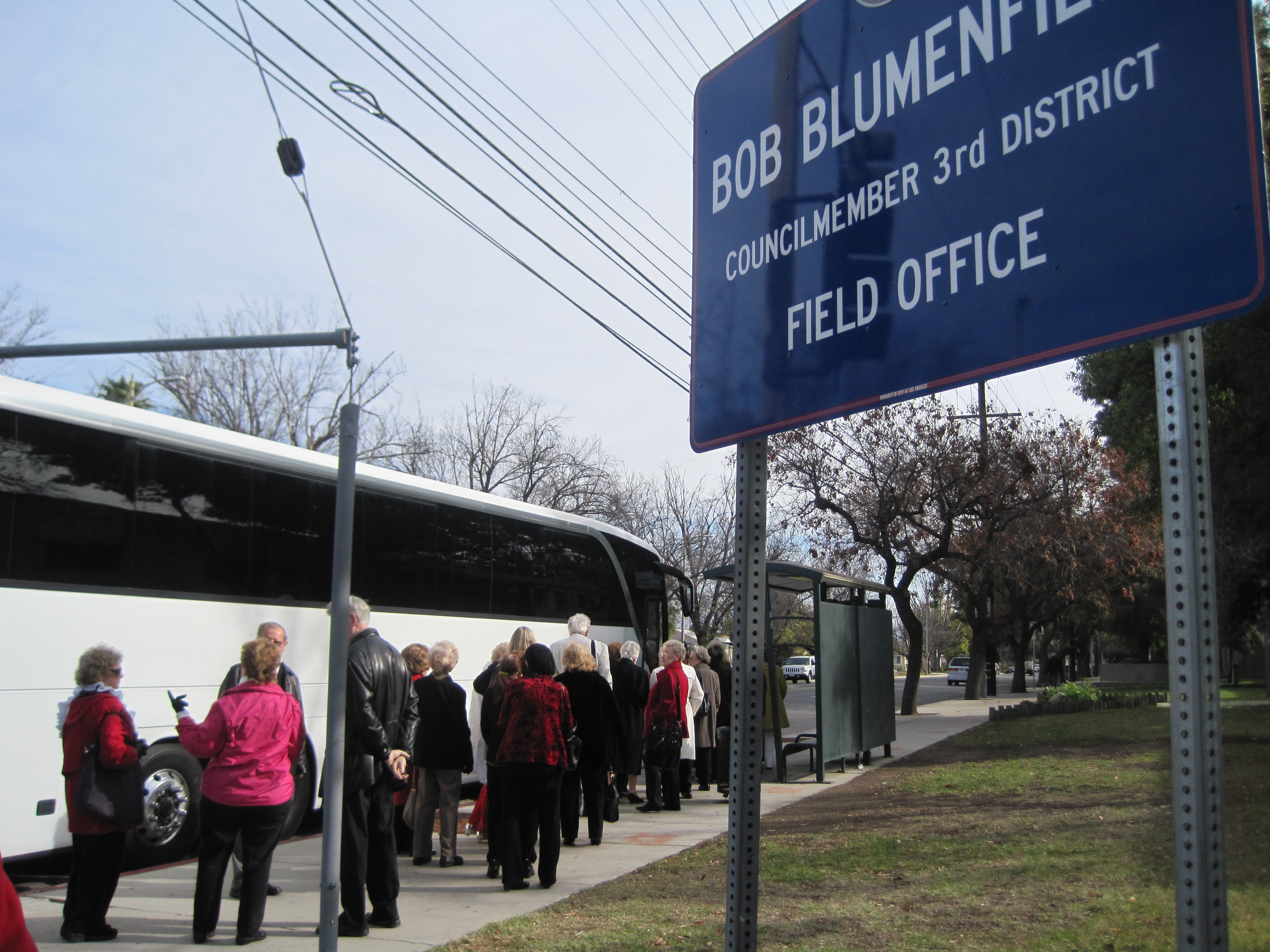 To assist nonprofits, schools, and senior organizations in his district, I set aside a limited amount of funds each year to provide special bus transportation to events or outings. This is to encourage groups that might otherwise have access issues take advantage of educational, cultural, and recreational opportunities in the area. You can request to be a part of this program at: http://blumenfield.lacity.org/request_bus_transportation

Thanks to Hope C'Dealva-Lenik St. Mel's Adult Club Trip Coordinator, for sending us pictures of their outing.

More pictures after the jump:

As we ring in the new year tonight, Los Angeles will become the largest city in the nation to ban single-use plastic carryout bags. Councilmember Bob Blumenfield has been working to raise awareness ahead of the ban, and encourage shoppers to use reusable bags.

Starting January 1, 2014, large grocery stores and pharmacies in the City of Los Angeles will no longer be able to provide customers with single-use plastic carryout bags and will charge $0.10 for each paper carryout bag requested by the customer. On July 1, 2014, small retailers that sell groceries will need to meet the same requirements.

With the holiday and winter season upon us, it's more important than ever to use energy wisely and save money in the process. Here are a few simple ways to keep electricity costs down while having a safe and festive holiday season:

LADWP offers a variety of rebates and programs for our residential customers including ebates and incentives for appliances, building products, heating & cooling, landscape & irrigation, pool pumps, and toilets. You can learn more here.

Councilmember Bob Blumenfield was profiled in the most recent edition of "Advocacy & Action", a newsletter published by the Central City Association of Los Angeles, highlighting a September talk with CCA's Executive Committee:

In September, newly-elected Los Angeles City Councilmember Bob Blumenfield addressed CCA’s Executive Committee on his priorities in office and his overall philosophical approach to good governance. In his introductory remarks, Councilmember Blumenfield stressed that the “essence of good government” means “getting to yes.”

Operation Gratitude: Giving Back to Our Troops All Year Long

This past weekend I had the opportunity to join my friends at Operation Gratitude as they passed their millionth care-package milestone--a significant accomplishment for this organization that does so much to give back to the men and women of our military.

I've had the opportunity to work with Operation Gratitude for many years, dating back to my time working on veterans issues as Congressman Howard Berman's District Director. Since 2003, Operation Gratitude has sent more than 100,000 care packages each year to our service men and women deployed in hostile regions, to their children and to our veterans, first responders, wounded warriors and their care givers. Care packages filled with snacks, entertainment items and personal letters of appreciation have lifted morale and brought countless smiles to the faces of those who have sacrificed for our Nation.

My friend and Veterans Community Action Team (CAT) Chairman, Art Sherman, was given the important honor of laying down a memorial wreath to honor fallen Vietnam veterans at the ceremonial wall exhibit. Another Veterans CAT member, Angel Cuevas serves as Director of Strategic Operations for Operation Gratitude, and I’m excited to continue to work with Art and Angel and our entire Veterans CAT to ensure that LA leads the way on veterans’ issues.

It’s been my honor to have been involved with this initiative for many years, now. Thank you to Operation Gratitude’s founder and president Carolyn Blashek for inviting me to participate in this milestone achievement.

Cilck here for more information on how you can get involved in our Veterans Community Action Team, or call my Emergency Preparedness Field Deputy, Erik Rodriguez at (818) 774-4330.

Check out a photo gallery from the event after the jump:

Earlier this month, Los Angeles marked 100 years since the Los Angeles Aqueduct, one of the greatest infrastructure achievements of the 20th century, brought water to the city and set the stage for it to become the metropolis it is today.

That same day, the Los Angeles City Council took an important step toward making a critical investment in our city’s virtual infrastructure that will ensure Los Angeles’s competitiveness in the 21st century. The council voted unanimously to move my proposal to bring community broadband with potential for fiber and wireless capability forward by inviting the private sector to submit plans for partnering with the city on this project.

Citywide broadband presents an enormous opportunity for L.A. to bridge the digital divide, create economic opportunity and attract new tourism dollars. It has the potential to transform the city, create jobs and make us economically competitive.

Other cities, from Philadelphia, and from Corpus Christi, Texas, are already experimenting with their own versions of wireless community broadband. L.A. would be by far the biggest city to do this and we would set the standard.