Published in the Valley Vantage- October 7, 2021

Every ten years, the census reflects changes in local population and requires re-drawing of Congressional, supervisorial, state legislative and local city council districts. In 2020, my district had the highest census growth in the city so some change is coming. This year the Los Angeles City Council Redistricting Commission (LACCRC) convened starting in April to engage the community and review how the city has changed, guided by the principles in the federal Voting Rights Act. They are tasked with determining how to re-draw district boundaries to ensure that every community has fair representation. After months of deliberation with public input, last week the LACCRC voted on a new draft map with some major changes that will impact the future of our city - including some very big implications in the Southwest San Fernando Valley.

I’d like to take this opportunity to share with you the facts about what is happening, who is making these decisions, where they are in the process, and how you can get involved and make your voice heard.

Over the past few months various draft maps have been floating around online, but not until last week’s meeting did the LACCRC narrow down the maps under consideration to just one. If the new proposed map is formally adopted by the City Council, the current 3rd District, which I represent, would be split in two and join some neighboring communities. One district (labeled as 4 or 2) would serve Canoga Park, Reseda, Winnetka as well as Lake Balboa and most of Van Nuys. The other (labeled as 3) would include all the hillside communities from Woodland Hills through Tarzana, Encino and Sherman Oaks, and part of Valley Glen. Prior draft maps considered by the Commission included some that looked much more like the current district, including some that divided Woodland Hills in two. 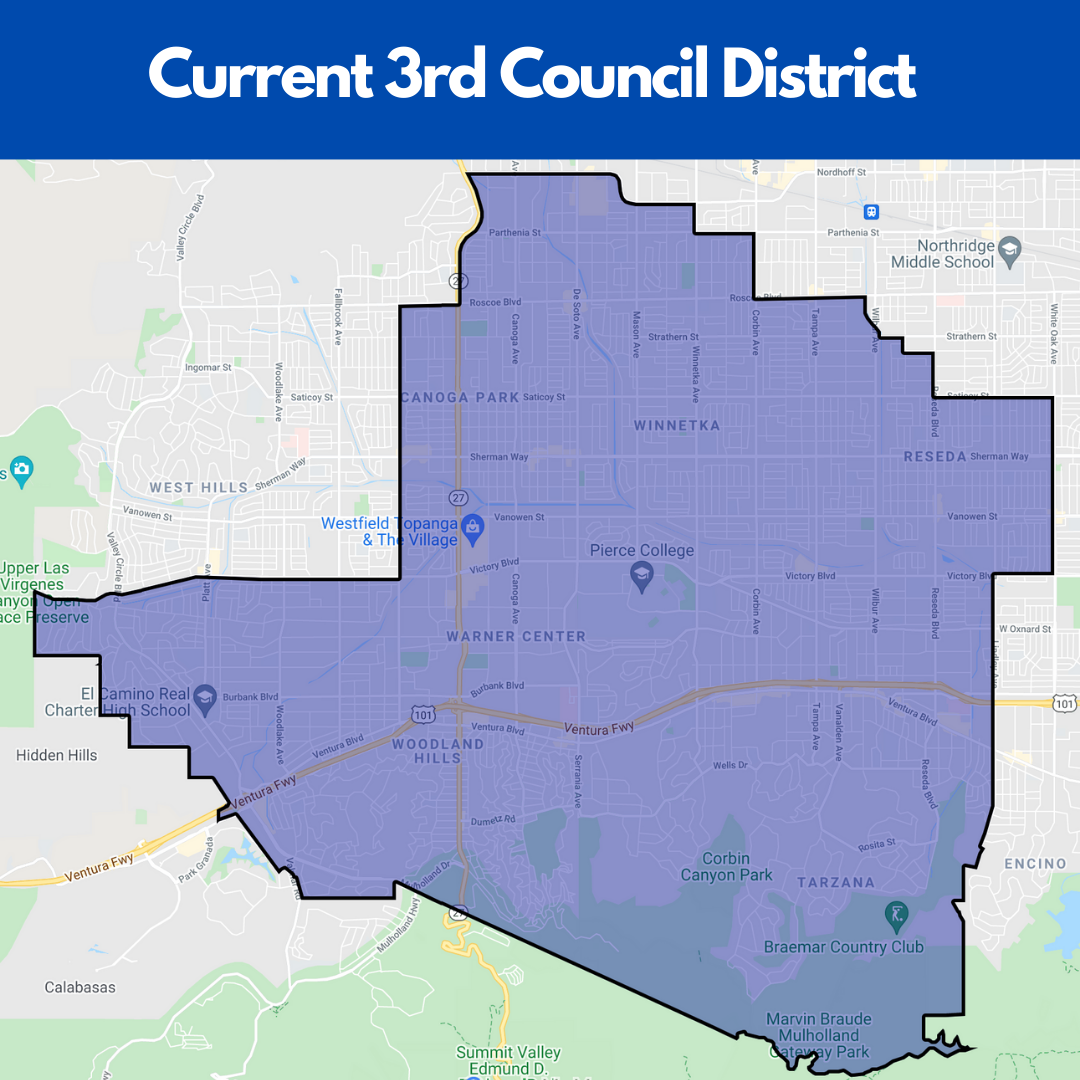 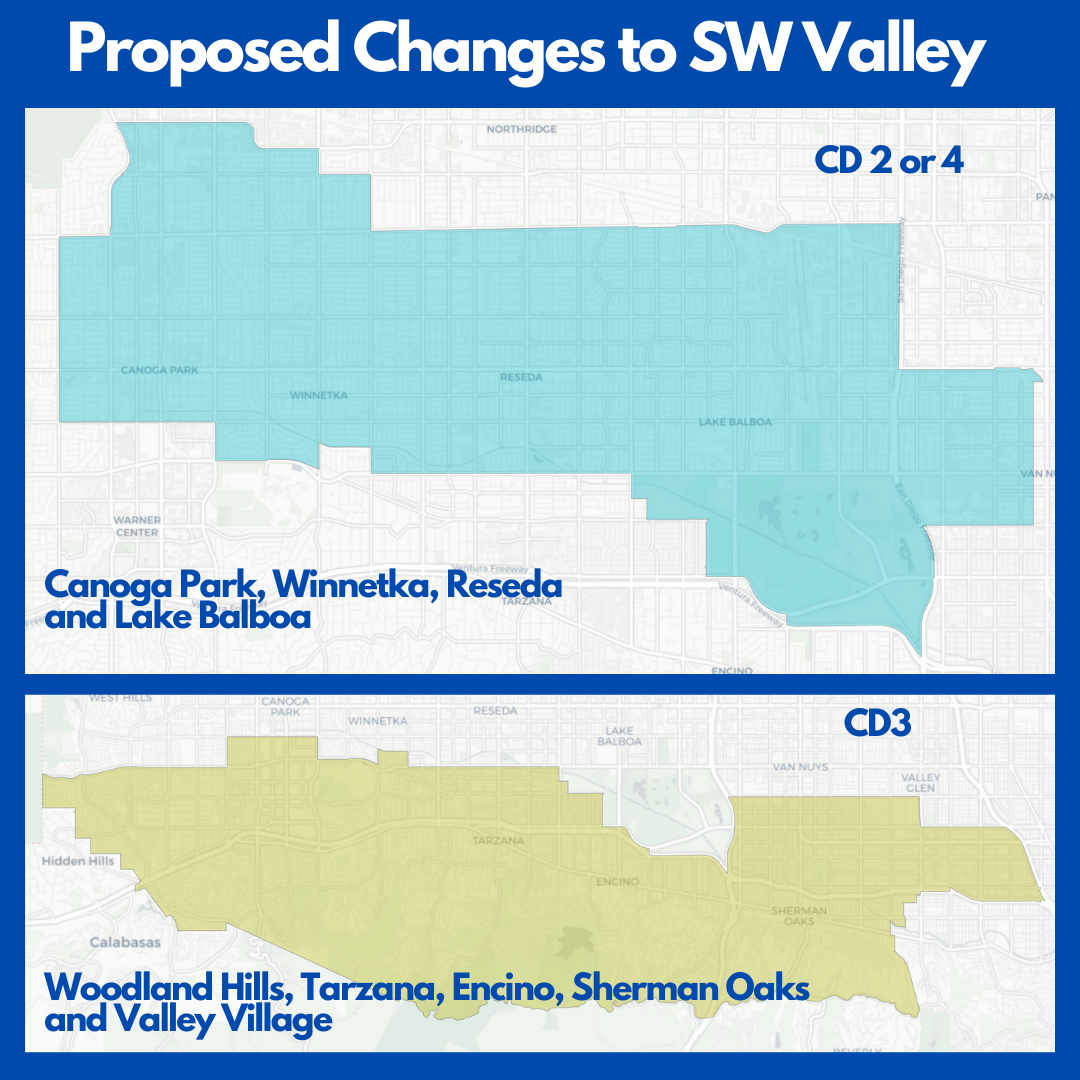 While I would be happy to add the wonderful communities of Encino, Sherman Oaks and Valley Glen to District 3, I hate the idea of losing the amazing communities of Reseda, Winnetka and Canoga Park — especially since I have made revitalization of these areas a cornerstone of my agenda which includes over $100 million in investments in Reseda and more than $50 million in Canoga Park. However, redistricting is not supposed to be about what I or any other Councilmember wants. Councilmembers are not supposed to select their voters or dictate the Commission’s actions. The LACCRC decisions are not based on where incumbents or challengers live. Again, their job is to ensure that districts are made up of communities of interest while the Voting Rights Act is upheld.

The West Valley would not be the only region drastically changed if this latest map is adopted. Communities like Koreatown, which has historically been split up into multiple districts, would be unified in a single district. Many other equity issues throughout the city are potentially remedied with this map, but others are not. Other incumbents also have major changes to the districts they serve, which has been the source of some heated reporting and controversy. The Proposed District labeled “4 or 2” has no constituents from the current districts 4 or 2.

Whatever the Commission ultimately decides will come to the Council for review and final adoption. While the Council will need to respect the work and the process undertaken by this commission, it will also have the opportunity to make changes it feels are appropriate and equitable. But again, it is not about who Councilmembers want to represent, it is about making sure that districts are balanced numerically, in compliance with the Voting Rights Act, and keep intact communities of interest as much as possible. It is impossible to perfectly achieve all three of these goals, so any map will involve compromise and some imperfect boundaries or split communities.

Right now, is a critical time for all Angelenos, especially those in the West Valley, to make their voices heard. The LACCRC will host four public forums this month before this final map comes to the City Council for final adoption. You can find the zoom link, dates and times here: https://laccrc2021.org/upcoming-meetings-2/. In previous meetings they haven’t heard from many folks in the West Valley, so it’s critical that they hear from you now.