LOS ANGELES – On the heels of a series of major announcements regarding high-speed Internet access in Los Angeles, Councilmember Bob Blumenfield today welcomed the entrance of both AT&T’s GigaPower and Google Fiber to the Los Angeles marketplace.

“This has been a tremendous week for our efforts to create a more connected Los Angeles as we welcome AT&T Gigapower and Google Fiber to Los Angeles, and look forward to continuing to push Los Angeles to become the world’s premier gigabit city. Access to high-speed Internet is essential to the City’s future economic competitiveness, and will drive Los Angeles’s entertainment, tech, and entrepreneurial activity," said Blumenfield, who chairs the City’s Innovation, Grants, Technology, Commerce and Trade Committee.

On Monday, AT&T announced plans to bring GigaPower fiber broadband to Los Angeles, as well as low-cost Internet subscriptions to low income homes, making Los Angeles one of the first major cities in the United States where AT&T has decided to invest in its fiber build out. This morning, Google announced they are exploring rolling out their Google Fiber service to Los Angeles, a significant investment in Los Angeles’s virtual infrastructure that will provide Angelenos with high-speed and relatively low-cost Internet access.

Since taking office in July 2013, Blumenfield has led City efforts to expand and enhance access to high-speed broadband: traveling to Google headquarters in Mountain View in 2014 to work with experts on expanding access, pushing the City to step up its efforts to close the digital divide and increase Internet speeds, and loudly trumpeting Los Angeles’s efforts to incentivize additional investment in broadband in Los Angeles. 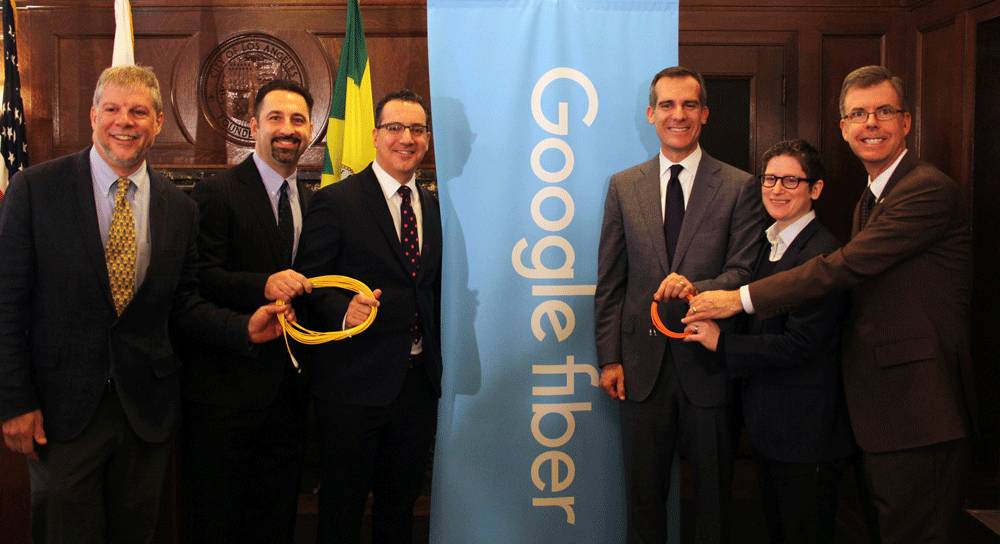 Early in his term, Blumenfield was joined by Mayor Eric Garcetti in launching CityLinkLA, an initiative to ensure that Los Angeles is among the most connected cities worldwide. This year, as part of that effort, the City released a Request for Participants (RFP) to identify one or more providers committed to deploying advanced wireline and wireless networks that can provide one-gigabit broadband speed or more to residents and businesses, with a level of free service including free basic wireless services.

"Groundbreaking investment in our city's virtual infrastructure from private sector partners at AT&T and Google will join with CityLinkLA to make Los Angeles the most connected city in the nation,” continued Blumenfield.

The announcements this week by AT&T and Google build on Blumenfield’s legislative efforts, including the CityLinkLA RFP, to which respondents are currently being evaluated, with a winning bidder or bidders expected to be announced early next year.