Last week, as the final touches were being completed on the West Valley's latest Cabin Community, I spent a night there. There is more on our grand opening event and information about the site below but I wanted to share with you my experience that night. It’s one thing to list off what’s included in our Cabin Communities but it’s another to try, even in a small way, to put myself in the shoes of someone who is moving into this facility and to experience it as they would to some extent. Joined by my City Council colleague Kevin de Leon, who the next day was breaking ground on his first set of cabins, and a few folks from Hope of the Valley (HotV), we met at the entrance on Topham. We went through the standard security screening, put our things in our respective cabins and got ready for evening. 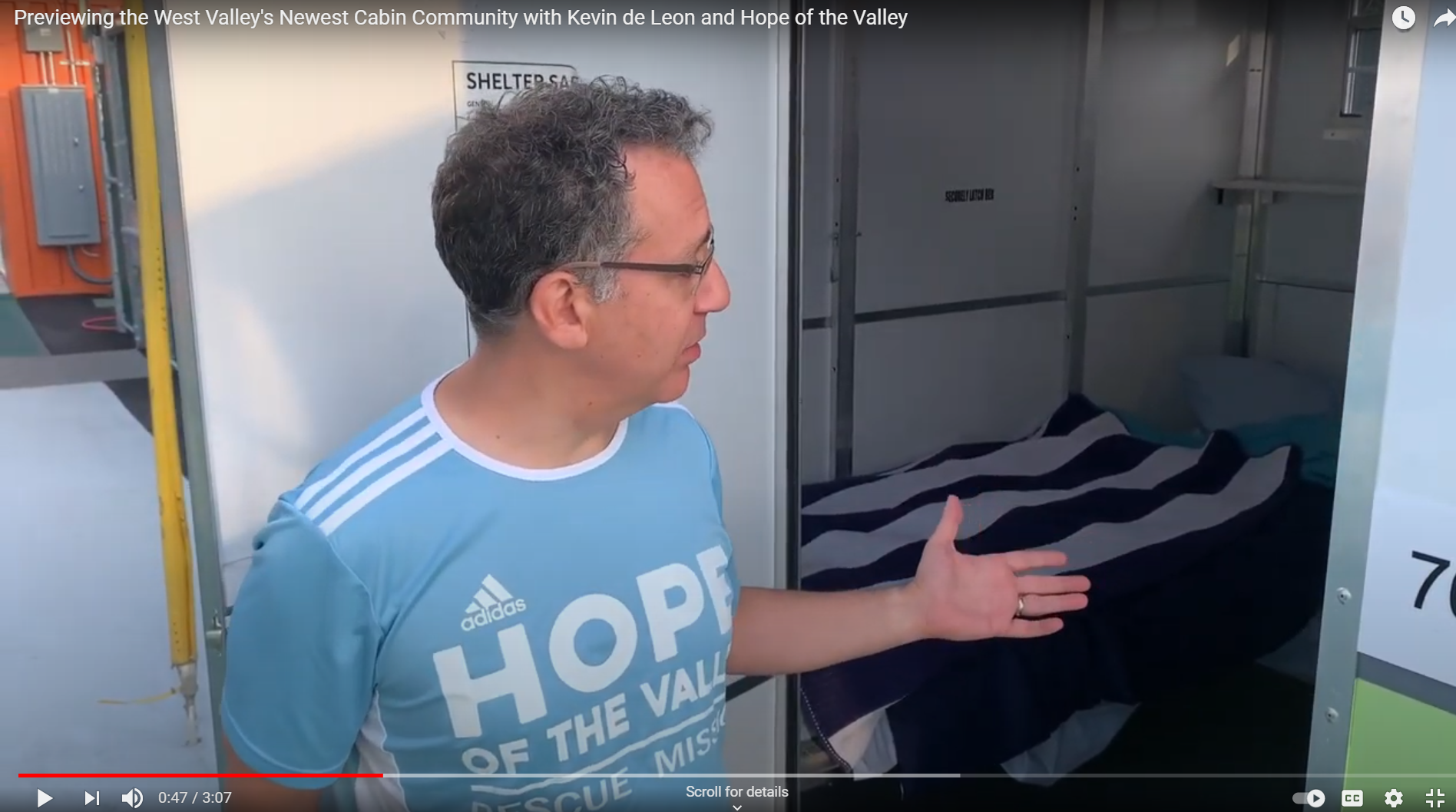 The first thing that everyone did when they got in their homes was turn on the personal air conditioners to help combat the lowering, but still intense, triple digit temperature outside. Extreme heat is not something new to us in the West Valley and when my staff and I have been doing outreach with homeless people in the past few months for the cabins, the question of AC comes up every time.

Together we shared dinner prepared by the same provider who’ll be serving three meals a day to the new residents. Kevin and I spoke at length with HotV staff about the ongoing homeless crisis, what’s being done at City Hall, and their stories as frontliners of this emergency.

We then got ready for bed, brushed our teeth and turned in for the night. From having running water at your fingertips, access to wi-fi, plugs next to your bed, lights to turn on and of course the incredible staff and resources of HotV readily available, it was clearer than ever that these cabins are night and day different from living on the streets. And the biggest amenity that I hear about from unsheltered people is having a door to lock. That feeling of being protected is priceless, and the ability to let your guard down safely is absolutely critical. These communities offer that and more.

When I woke up in the morning I was excited for the fact that in just a few days, folks who were on our streets would soon get to move in. Homelessness is inherently a trauma packed experience and for too long we have not had the resources to truly help. That’s now changing.

As Ken Craft, CEO of HotV says, the streets can’t be the waiting room for permanent housing. The cabins offer an opportunity for stability and aren't meant to be ‘THE’ solution to homelessness. Mixed with other efforts of ours like green lighting and funding new Permanent Supportive Housing (PSH) sites, Bridge Housing in Canoga Park, converting old motels into permanent housing through Project Homekey, expanding capacity at a local Domestic Violence nonprofit as well as drug treatment center, we now are well on our way to properly addressing the crisis on our West Valley streets. And all this is happening while the City Council is poised to finally pass legislation I co-authored that will allow the City to have a no-camping buffer zone around homeless services centers, freeways, and some other sensitive sites.

In the West Valley we have the beds, now we need to double down on outreach. We also need laws to maintain the safety, passability and cleanliness of our sidewalks and public right of ways.

As of this week, local unhoused folks in the West Valley are finally moving into the Sunflower. They are going through the steps we took that day and are being welcomed in. We are working on many other endeavors to help address homelessness but getting these cabins open was an important step. I’m incredibly grateful to Ken and Laurie Craft, Rowan Vansleve and their entire Hope of the Valley family for their partnership and everything they do to help combat the biggest crisis facing our generation. 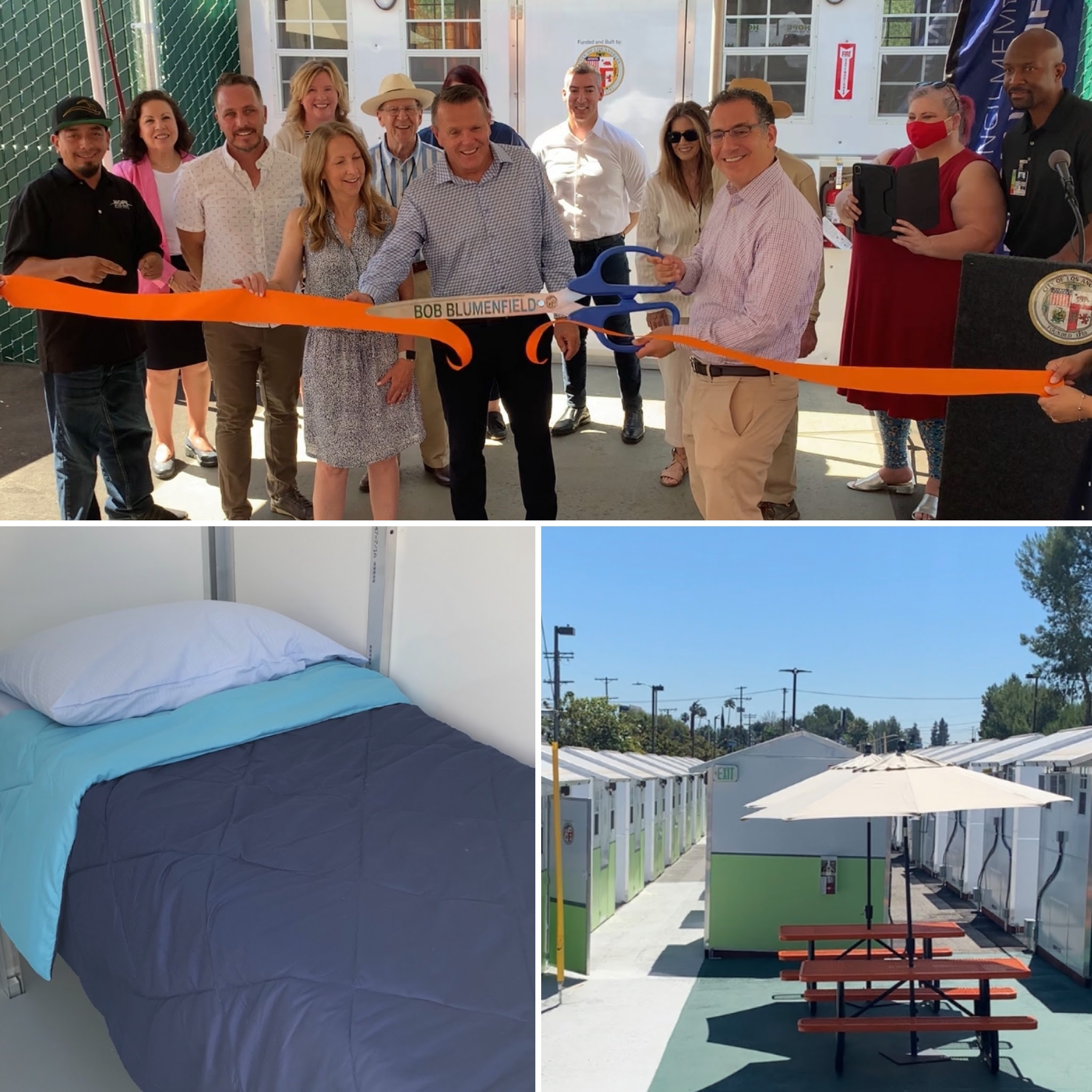 Councilmember Bob Blumenfield and Hope of the Valley Rescue Mission (HotV) opened the West Valley’s latest Cabin Community for local unhoused Angelenos. The ‘Sunflower Cabin Community’ boasts over 70 tiny homes with 140 beds that will be made available to those experiencing homelessness on the streets of the West Valley.

“With today’s opening of our second Cabin Community, we are opening more life-saving opportunities for the unhoused folks in my district,” said Blumenfield. “This site will serve as the first step out of homelessness for so many and I’m so grateful to our friends at Hope of the Valley for being incredible partners on this effort.”

Each cabin has its own air conditioner and heater to keep the interior a comfortable temperature year round and there are many shared amenities like laundry, three meals a day, restroom facilities, 24/7 security as well as case management and drug and mental health counseling. And pets are welcome as well and there is an on-site dog run.

Blumenfield is also leading on many other projects to expand available temporary and permanent housing solutions. Separate from his first Cabin Community in Reseda which recently opened, there are also several other PSH and affordable housing developments that recently broke ground and more that have been green lit and funded. He also spearheaded an extension of the Safe Parking program adjacent to his District Office, opened the Willows which is the West Valley’s Bridge Housing site and recently opened an additional lot for those living in their vehicles in Canoga Park. Also, at the end of last year, Blumenfield successfully pushed the city to purchase two local motels as part of Project Homekey to be converted into PSH.

Check out a video recap of our grand opening by clicking this link.

4th of July Extravaganza Brings Angelenos Together in the West Valley 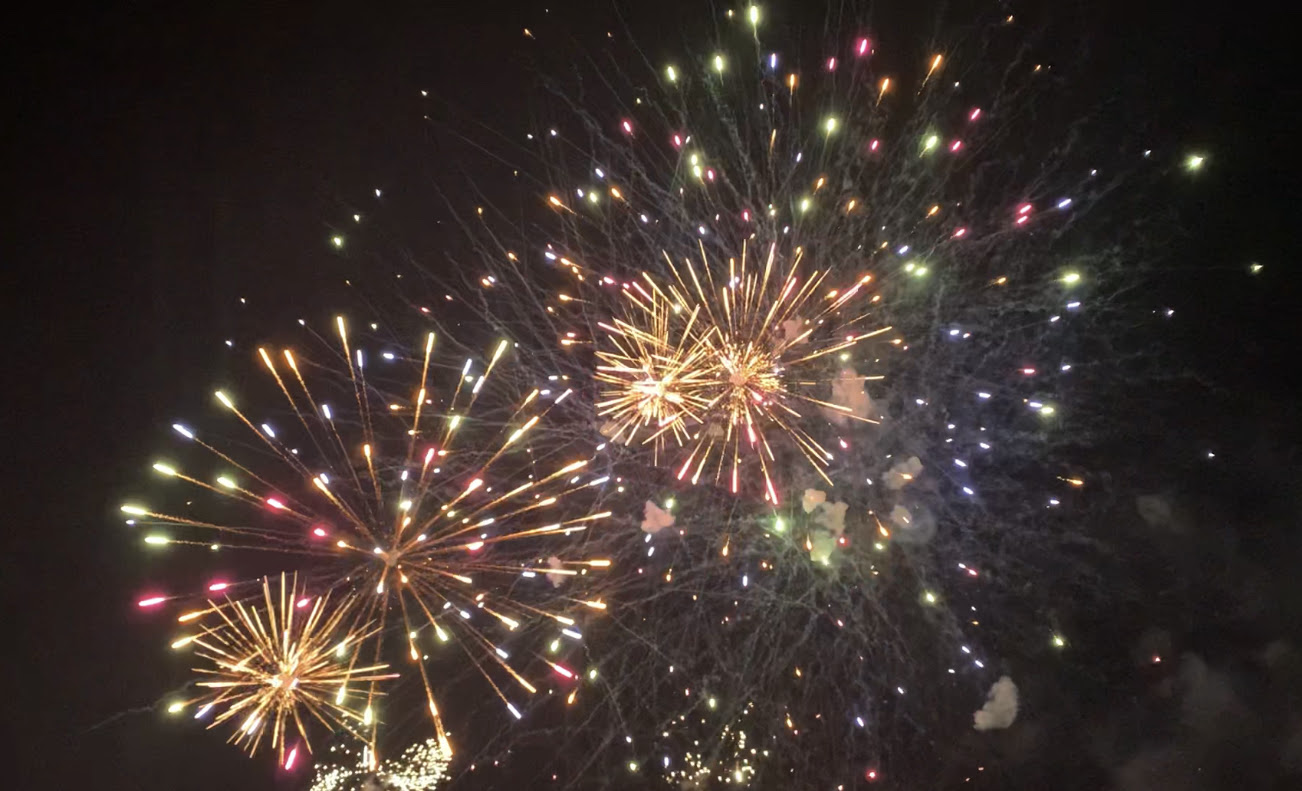 With immense hardships over the past 18 months, Blumenfield was grateful to present his annual 4th of July Fireworks Extravaganza at Warner Center Park. This event wouldn't have been possible without Nora Ross and her incredible team at the Valley Cultural Foundation, who overcame many obstacles to put it all together.

Blumenfield said, ‘It was truly inspiring to see so many folks come together to celebrate community, country and the aspirational values of freedom and independence to which we as Americans hold dear.”

See some highlights from the event by clicking here or the image below. 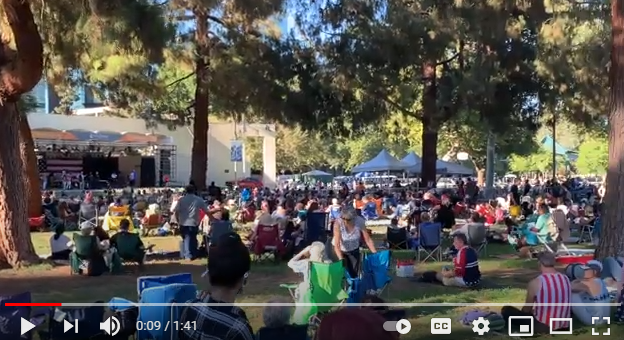 On July 1, the City Council overwhelmingly supported legislation co-authored by Councilmember Blumenfield that will establish constitutional, enforceable laws prohibiting encampments in certain sensitive areas, require notice and an offer of housing before prohibiting encampments in others areas, and enable the enforcement of disability access laws. The ordinance was heard and passed with a 13-2 vote. Because it wasn’t unanimous, it has to come back for a second vote which is scheduled at the end of the month in which a simple majority of votes will be needed for approval.

This motion, which was co-presented with Councilmembers Ridley Thomas, de Leon, O’Farrell and Council President Nury Martinez, would allow the City to have buffer zones including around freeways (i.e. Corbin underpass) and around shelter sites (i.e. the Willows and the Sycamore and Sunflower cabin communities).

This comes at a time when hundreds of more beds in the West Valley are opening through Cabin Communities and other interventions. With other efforts like Project Homekey and Bridge Housing, Blumenfield is finally within reach of having enough housing for every single unhoused person in CD3. Every ten years, an independent commission is assembled to analyze each City Council district and determine if changes need to be made to district boundaries. This process is critical to make sure the many communities that make up Los Angeles are well represented and bring more people into the process. The commission is hosting virtual events in each district and it’s important that they hear from as many residents as possible about what in our communities are important to them.

Though the process is independent from elected officials, Blumenfield encourages everyone to take part in this meeting or submit your testimony in writing to [email protected].

Join the commission on July 15 at 6pm for the CD3 specific meeting. Learn more about how to register here. 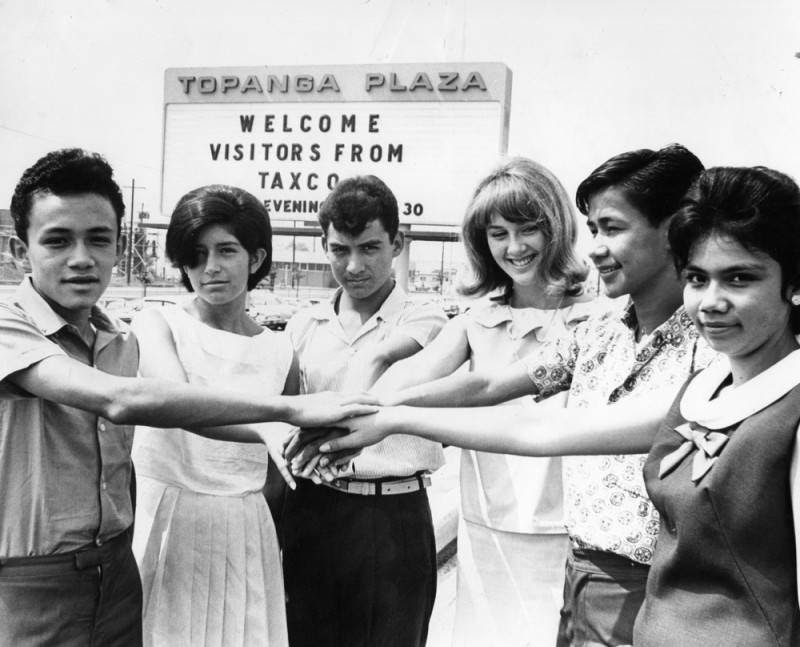 This week's photo from the Los Angeles Public Library's archives is from the Valley Times, July 23, 1965: "Joining hands in symbolizing the friendship between the United States and Mexico are these six students, some of whom are from Canoga Park and some of whom are from Taxco, Mexico, Canoga Park's Sister City. The Taxco students, part of a group of 15 who are visiting in Canoga Park, and their hosts took a tour of Topanga Plaza. The six are, from left, Juan Luis Bustamante, Taxco; Yuette Velazquez, Canoga Park; Cesar Garcia, Taxco; Martha Ellertson, Canoga Park, and Jaime Chew and Alba Rosa Bustamante of Taxco."