Los Angeles Must and Can Do Better

The horrific murder of Mr. George Floyd marked a tipping point that unleashed a torrent of pent up anger, a wave of grief and outrage, over brutal inequities and racism that have persisted against Black people for far too long. Thousands of diverse Angelenos gathered in inspiring, peaceful demonstrations throughout our city demanding an end to institutional racism and police brutality. I joined several of these demonstrations to show solidarity, bear witness, listen and learn. Sadly, opportunistic criminals took advantage of our shared call to action by looting stores, big and small. While we will and we must pursue these criminals and hold them fully accountable, we must not let them hijack this historic time and hopefully this inflection point.

I’ve been in constant contact with LAPD, LAFD and other local leaders. District 3 was supported by local law enforcement with the back up of the National Guard and was able to swiftly address credible threats, to protect our businesses in the area and preempt a potentially worse situation. A call for peace by protesters and a nighttime presence by law enforcement has meant that after several nights of curfews, the curfews have finally been lifted.

I’ve listened to many district residents and business owners, to people at demonstrations, and to community members including people who serve on my community action teams and neighborhood Councilmembers. I have redoubled my effort to pay special attention to the African American voices of people who have the lived experience that I can I never fully know, but that I strive to fully appreciate. To everyone speaking out at this time, please know that I will continue to listen as we all work together to create a better, more just and inclusive city. There are no simple, quick fixes to systemic racism. I commit to working with advocacy groups, faith leaders, members of law enforcement, and people across all sectors of our community. Together we can make change happen. 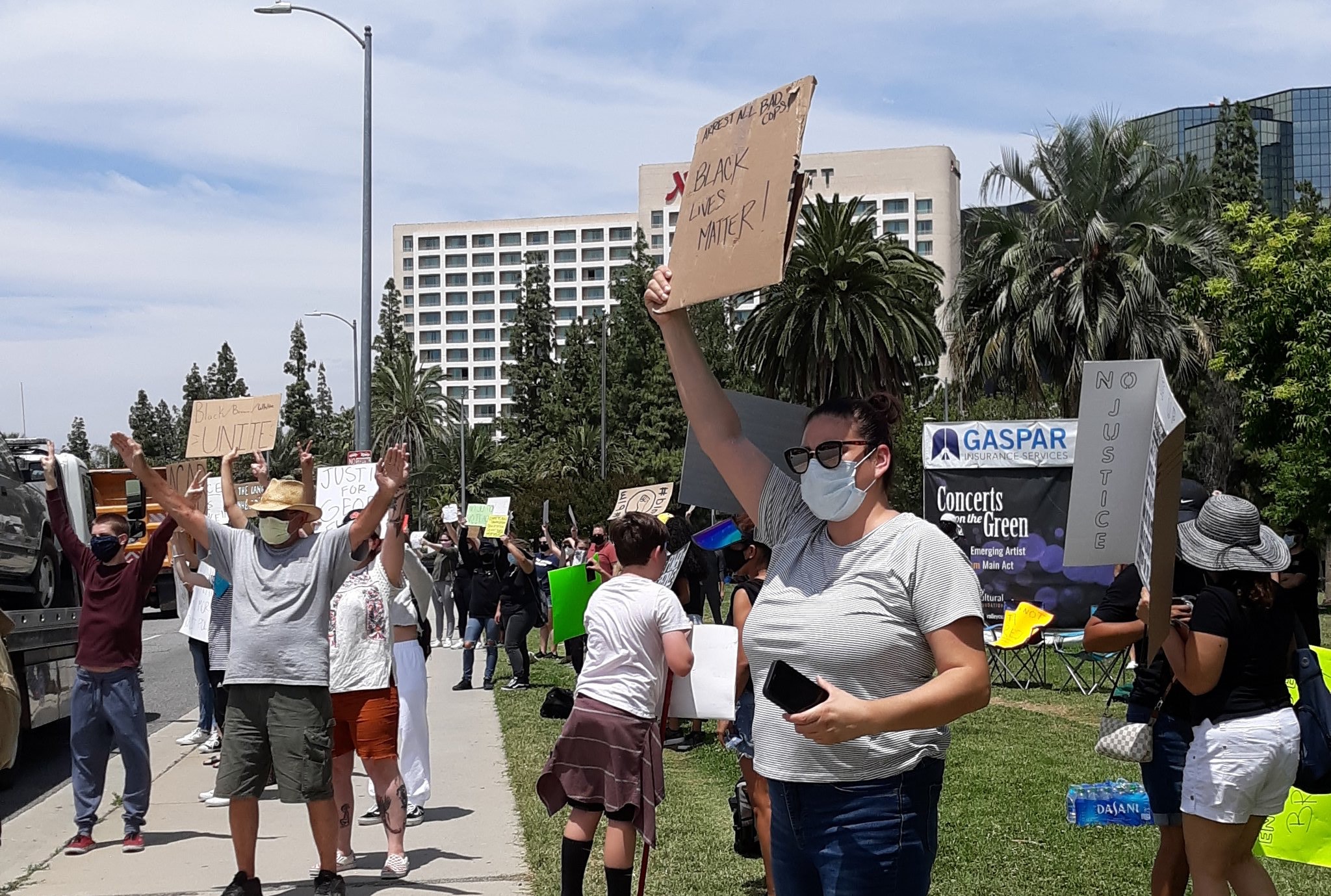 Although the murder of Mr. Floyd didn’t happen here, Angelenos felt it to their core because many feel like little has changed in the nearly 30 years since Rodney King was beaten by four LAPD officers.  So many young black lives had been threatened or ended at the hands of police and in response leaders at that time advanced policies to make LAPD more transparent and accountable — but more needs to be done.

Then-Mayor Tom Bradley created an independent commission on the LAPD, known as the Christopher Commission, which put a spotlight on the LAPD’s excessive use of force and failure to hold officers accountable. Years later, the US Department of Justice Consent Decree was issued to monitor reforms within the LAPD. They helped LA create an independent body of auditors, investigators and policy advisors known as the Inspector General’s Office to hold LAPD officers accountable. Since 1991 many milestones were achieved, such as the LAPD becoming majority nonwhite in 2012 and becoming the first major city to use body cameras on all its officers in 2015. More must be done.

On Wednesday the Mayor announced new reform ideas for LAPD, such as declaring a moratorium on using the controversial gang database known as CalGang and requiring officers to intervene when they see another officer making inappropriate use of force. The Mayor also announced the City’s Civil and Human Rights Commission (created by the City Council) is to start meeting next week to enhance procedural justice training and expand mental health intervention training for officers. Read more about the Mayor’s announcements here.

Although we still have a long way to go, I am committed to making the changes Angelenos deserve - to feel safe, protected and free. As we move forward, I am dedicated to making Los Angeles an equitable, prosperous, anti-racist city for all of us. I welcome your partnership in this effort and thank you for your ideas and determination to persevere.

The Budget is Open for Discussion and Revision

As the Covid-19 pandemic continues, projected City revenues are lower than we could have imagined, forcing most of the City to take major cuts and most employees to be slated for furloughs. In next year’s budget the Mayor outlined cuts to almost every department, except for the LAPD; he included an almost $200 million increase to the LAPD based on a union negotiated contract from last year to fund pay increases, but no increased services. In fact, it results in more uniformed cops in civilian jobs which would mean fewer on the street.

Because of the pandemic and the dramatically changing revenue assumptions, the Mayor’s budget proposal that was transmitted to the City Council Budget committee was not as detailed and certain as usual, and the Committee has yet to go through it line by line to review and propose changes. According to the charter, the Mayor’s budget is automatically approved if the Council does not pass a revised version of the budget by June 1. Many of us on the Council had critical questions and issues with the proposal that could not be immediately answered, so the budget was approved by default without a vote. However, the final budget doesn’t go into effect until July 1st when the new fiscal year starts. Consequently, this month the Council will have a chance to make changes before the budget takes effect. Because of changing revenue projections due to the economic decline, the Council will likely have to make additional cuts now and in the future to keep the budget balanced.

Many activists have opposed the Mayor’s proposed budget increase in police spending. Some have cited that LAPD receives 53.8% of the City’s discretionary budget. While this is true, the City’s actual budget includes much more than discretionary spending. While LA spends a lot of money on our police force, the percentage of the budget is complicated when you consider that priorities such as education and health are not at all controlled by the City, nor included in its budget since they lie in other levels of government (e.g. LAUSD and County). Housing, transportation, library and other critical City services are funded through non discretionary funds (proposition earmarks, fees, CDBG, etc). The total spent on police is $3.1 billion (LAPD’s operating budget only includes $1.86 billion of the total). The Chief Administrative Officer (CAO) states that about 16.2 % of revenue is spent on the police. With Proprietary Departments (Water and Power, Harbor, and Airport) the total City budget is around $30 billion and the percentage spent on LAPD as a portion of the whole is about 10.5%.

Several Council members, including Council President Martinez, have proposed cutting between $100 -$150 million from the LAPD and spending that money on direct investments into communities of color. This cut would put LAPD on par with cuts made to other departments and would allow for City investments into disenfranchised communities to addressing key underlying conditions that have been highlighted in the protests. Finding the actual cuts, offsets, and putting together the details will occur in the Budget Committee where I will be working to find solutions.

While making cuts to the budget is always difficult, cuts to the LAPD does not have to mean fewer cops on the beat in the West Valley, nor does it mean we have to be any less safe today than last year. The details matter. I’m committed to making sure that neither of those outcomes is a result of a budget change. As a City, all departments will have to shoulder the burden of this current economic crises. While we will have to make cuts, we also need to be safe, resurface our streets, fix potholes, and run essential services. 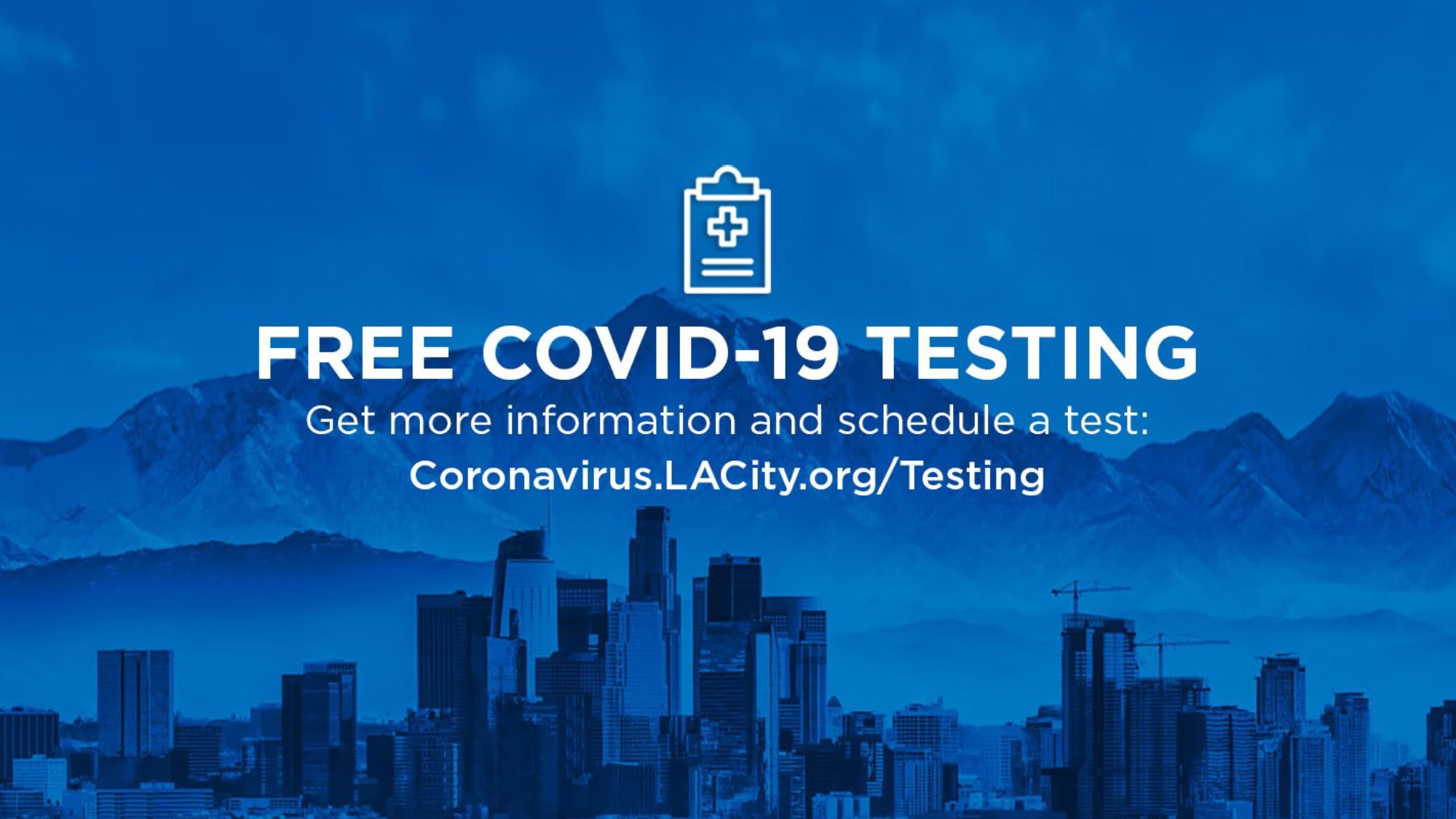 During the past week, COVID-19 testing sites had to temporarily close because firefighters who worked at these locations were rapidly reassigned to other emergency duties. As of Friday, all coronavirus testing sites in LA County have reopened. If you or a loved one would like to get tested, find your nearest testing center at https://lacovidprod.service-now.com/rrs 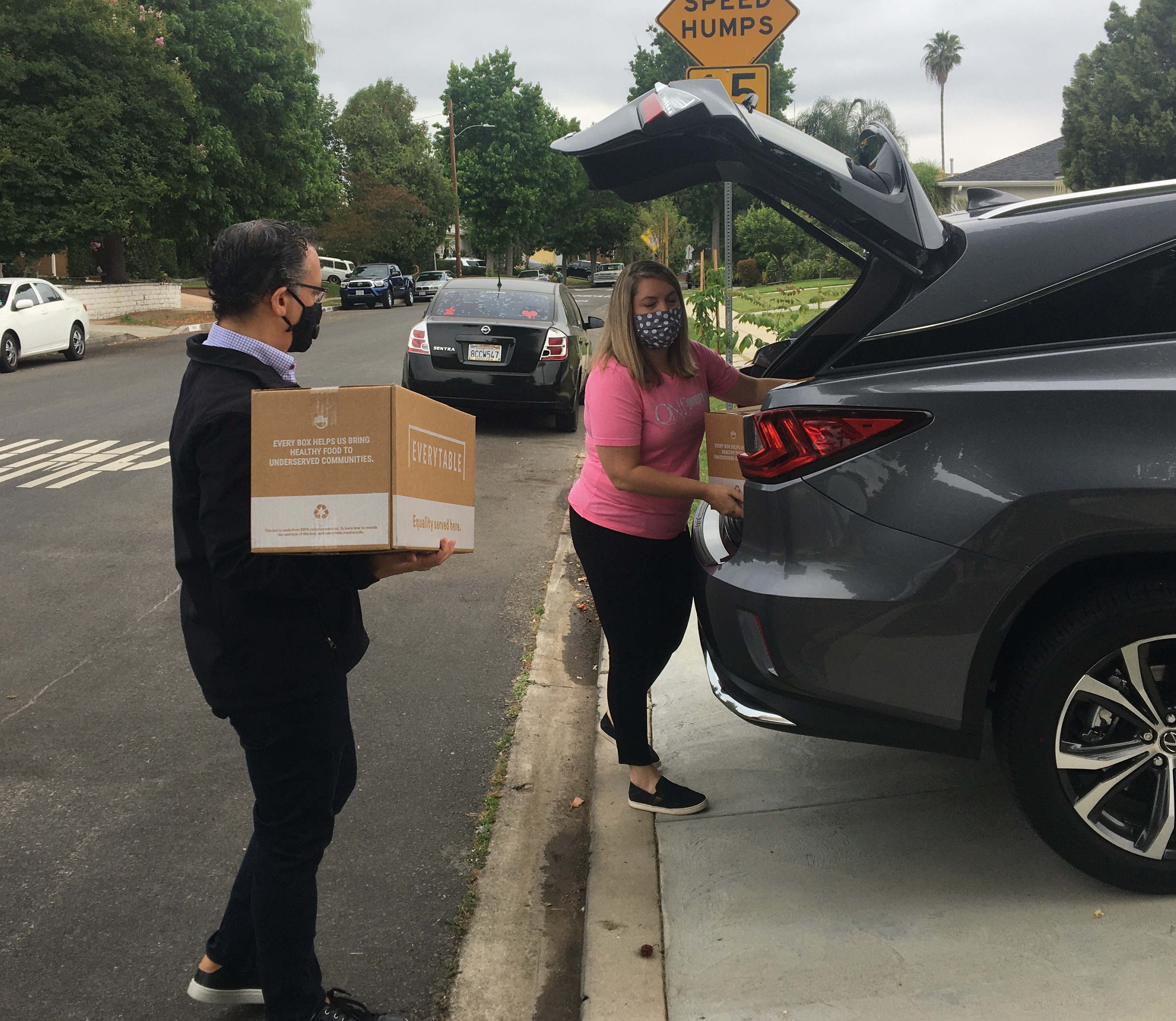 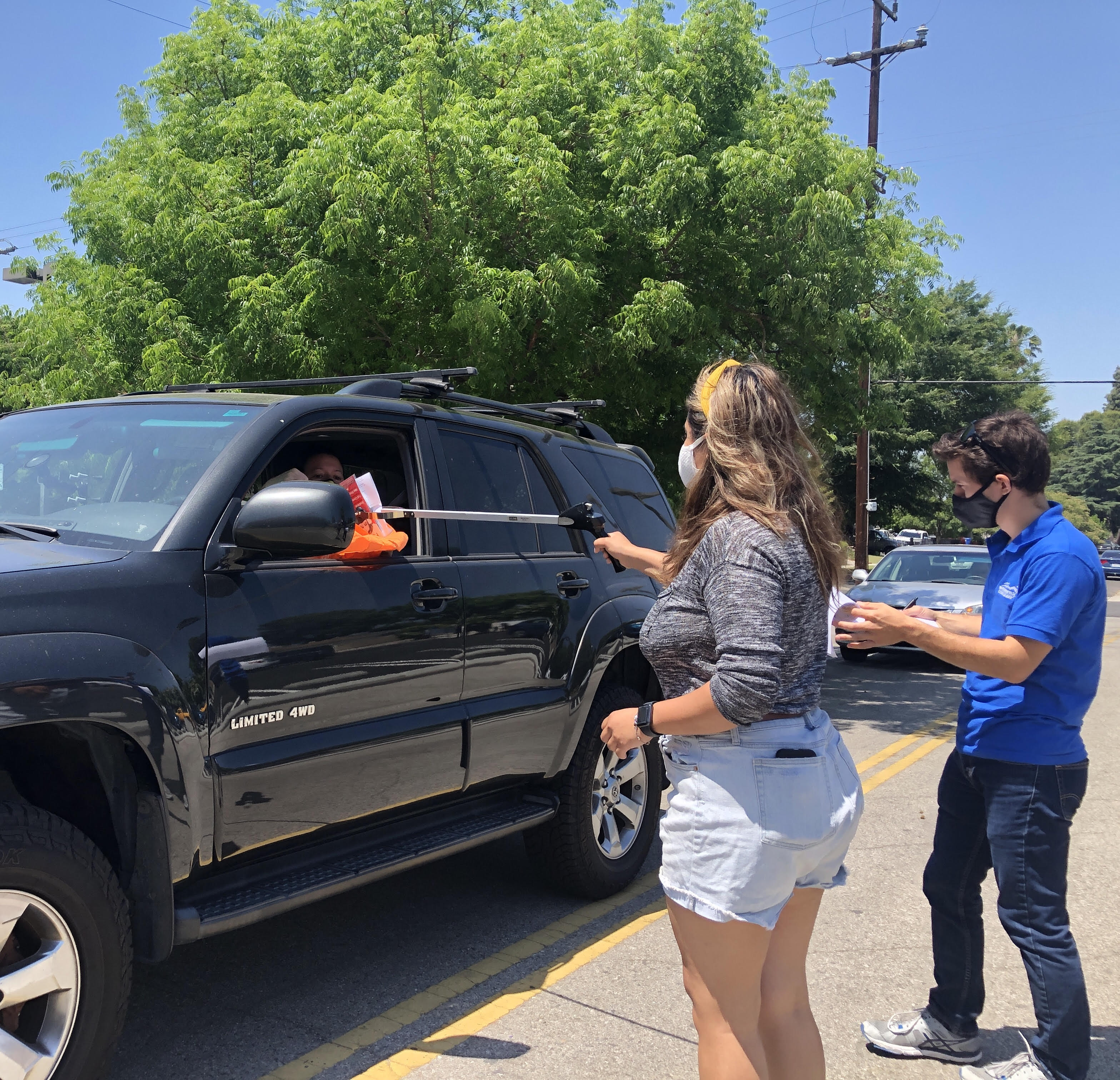 Team Blumenfield continues to distribute thousands of free reusable cloth masks to community members who signed up through his mailer.