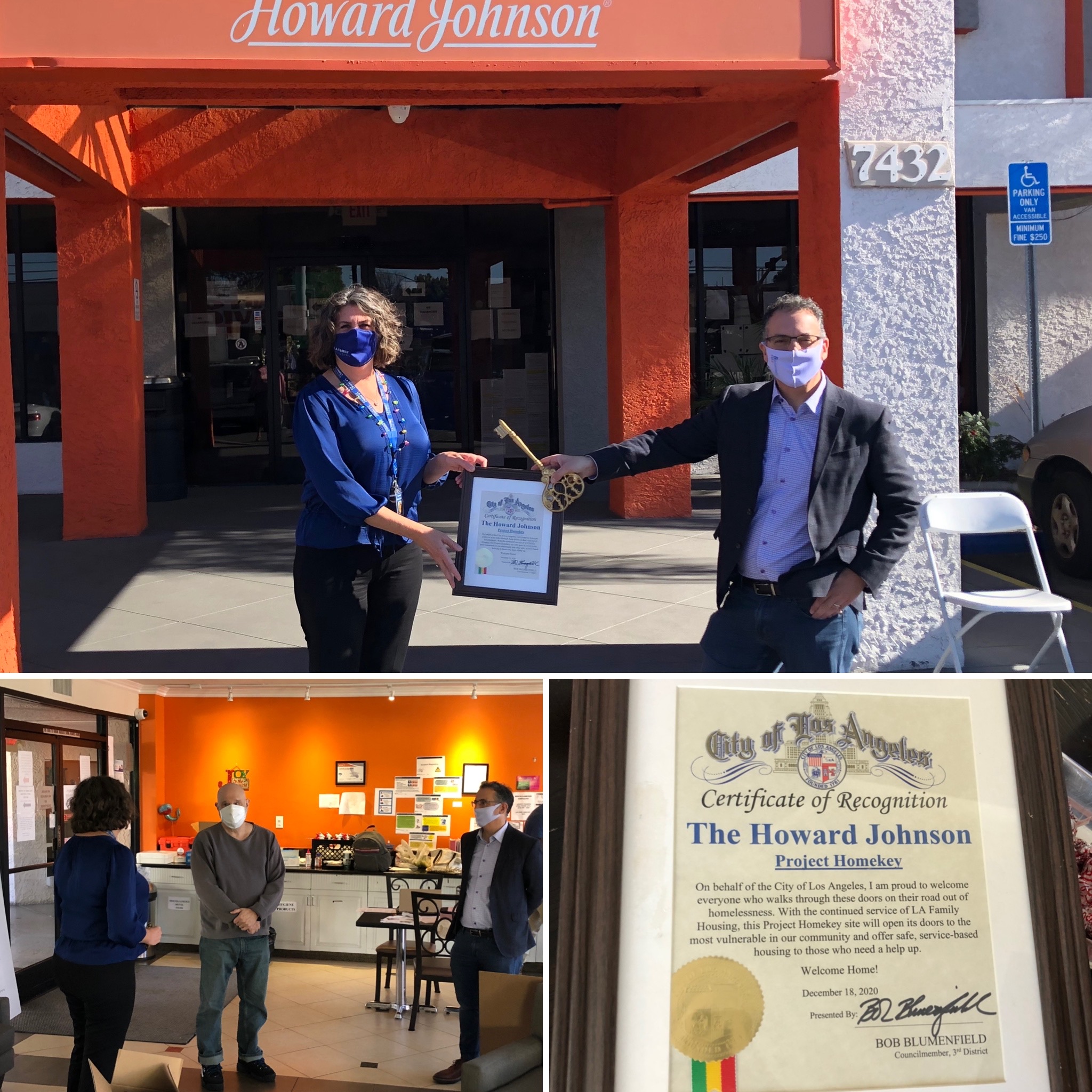 In an ongoing effort to provide housing, shelter and services to homeless individuals during the COVID-19 pandemic, Councilmember Blumenfield helped secure the purchase of two hotels for unhoused Angelenos in his district. These are the first two hotels in Los Angeles that will transition from being temporarily leased sites under what became known as the “Project Roomkey” initiative into permanent sites under the program known as “Project Homekey.”  They will both be owned and operated by LA Family Housing (LAFH).

With the temporary nature of Project Roomkey, Blumenfield wanted to make sure that no one who entered the program in the West Valley experienced gaps in service or returned to the streets when “project room key” funding runs out. These newly purchased hotels will help local unsheltered people get into stable housing. The Howard Johnson hotel in Reseda (75 rooms) and the Super 8 in Canoga Park (52 rooms) will now serve formerly homeless people on a permanent basis. The Howard Johnson will remain as a transitional housing site in the near term with residents being relocated as appropriate housing is found and more permanent supportive housing is built. The Super 8 will be converted to permanent housing once kitchenettes have been installed in each room to make that possible.

Purchased by the Housing Authority of the City of Los Angeles (HACLA) and transferred to LA Family Housing (LAFH) to own and operate, these acquisitions are the result of the successful partnership between the City and State to bring unsheltered residents indoors and prevent vulnerable people from exposure to COVID-19. The City directed the purchase of these two hotels by using several funding sources including State of California Homekey dollars and federal CARES Act money. 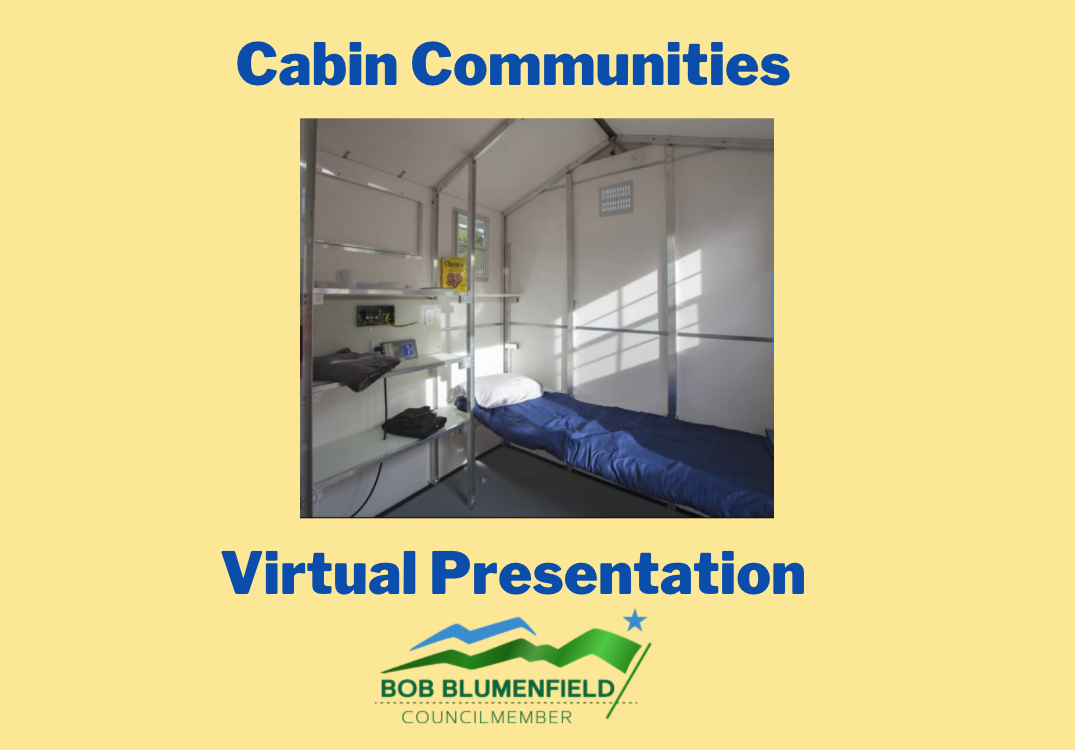 On December 14, Councilmember Blumenfield hosted a virtual presentation for the community to address and demystify community concerns regarding the two cabin communities being constructed in the West Valley. They will house previously unsheltered people from the West Valley and will be located in Reseda and Tarzana.

To answer common questions, Blumenfield invited City leaders from Riverside and Santa Rosa who had successfully constructed cabin communities in their respective areas. In each case, zero neighborhood complaints were issued once the programs opened and these cabin communities became invaluable transitionary tools to get folks off the street, into a shelter, and prepared for permanent housing. Click here to watch the virtual presentation.

In preparation for this event, Blumenfield received over 200 questions from the community. To make sure everyone’s questions were answered, he wrote a comprehensive Q&A factsheet that addresses each and every question. Click here to read the Q&A. If you have additional questions that were not answered in the Q&A factsheet or from the  presentation, please do not hesitate to call Councilmember Blumenfield’s office at 818-774-4330 or email [email protected]

These cabins are expected to open in March/April 2021 and are part of Blumenfield’s extensive efforts to reduce homelessness in the West Valley. Click here to learn more.  He will have additional meetings for neighbors once a service provider is onboard and he is establishing Cabin Community Committees that will include members of the nearby neighborhoods to work with him and the service provider on implementation.

There is a lot to be thankful for in the latest $900 billion congressional COVID-19 relief bill, but it doesn't offer nearly enough to millions of Americans or to cities that serve them. Struggling through the health and financial impacts of the pandemic, families need more than the $600 stimulus checks in the package. Funding critical programs will help millions of Americans, but the City of LA won’t get urgently needed help from this bill. That is disappointing, and it leaves LA in deep trouble.

More about this federal package can be found here.

The current aid package offers practically no support for cities and states facing disastrous pandemic related budget shortfalls. Los Angeles is facing a $675 million budget deficit, and we are not alone. New York City is facing a $9 billion deficit. The State of Texas is facing an almost $5 billion deficit, and Pennsylvania is under about $6 billion.  Prior to COVID, the City of LA was in a historically strong financial position with record amounts of emergency funding reserves. Covid has wiped out our reserves and thrown us into deficit. While Mitch McConnell can politicize this and dismiss giving local aid by calling it a “blue state bailout,” the reality is this has nothing to do with politics and everything to do with real people who are suffering, and real services that may have to be cut.

Over 319,000 Americans have died due to COVID-19 and millions more grapple with its health impacts. Our neighbors are hurting and too many people aren't getting financial relief. Evictions are currently halted, but that won't last forever and it’s not realistic to believe that people who have been financially hit during the pandemic will magically be able to pay back-due rent. This was not their fault and it is the responsibility of elected leaders to step up and help them.

As a City we can’t spend money we don't have, and it looks like Washington DC isn't going to do what is needed. The State of California is currently sitting on a surplus that could be upwards of $30 billion, taxpayer money that should be tapped to help cities immediately. Without help soon, LA faces layoffs that could include firefighters and police officers, as well as the day to day workers who keep basic services going.  This will not only hurt those workers, but it will also be devastating to the Angelenos who rely on those workers for safety, services and infrastructure maintenance. If the banks and auto companies were able to be bailed out during the Great Recession, it’s now time for the American people and local governments to get the help they desperately need. 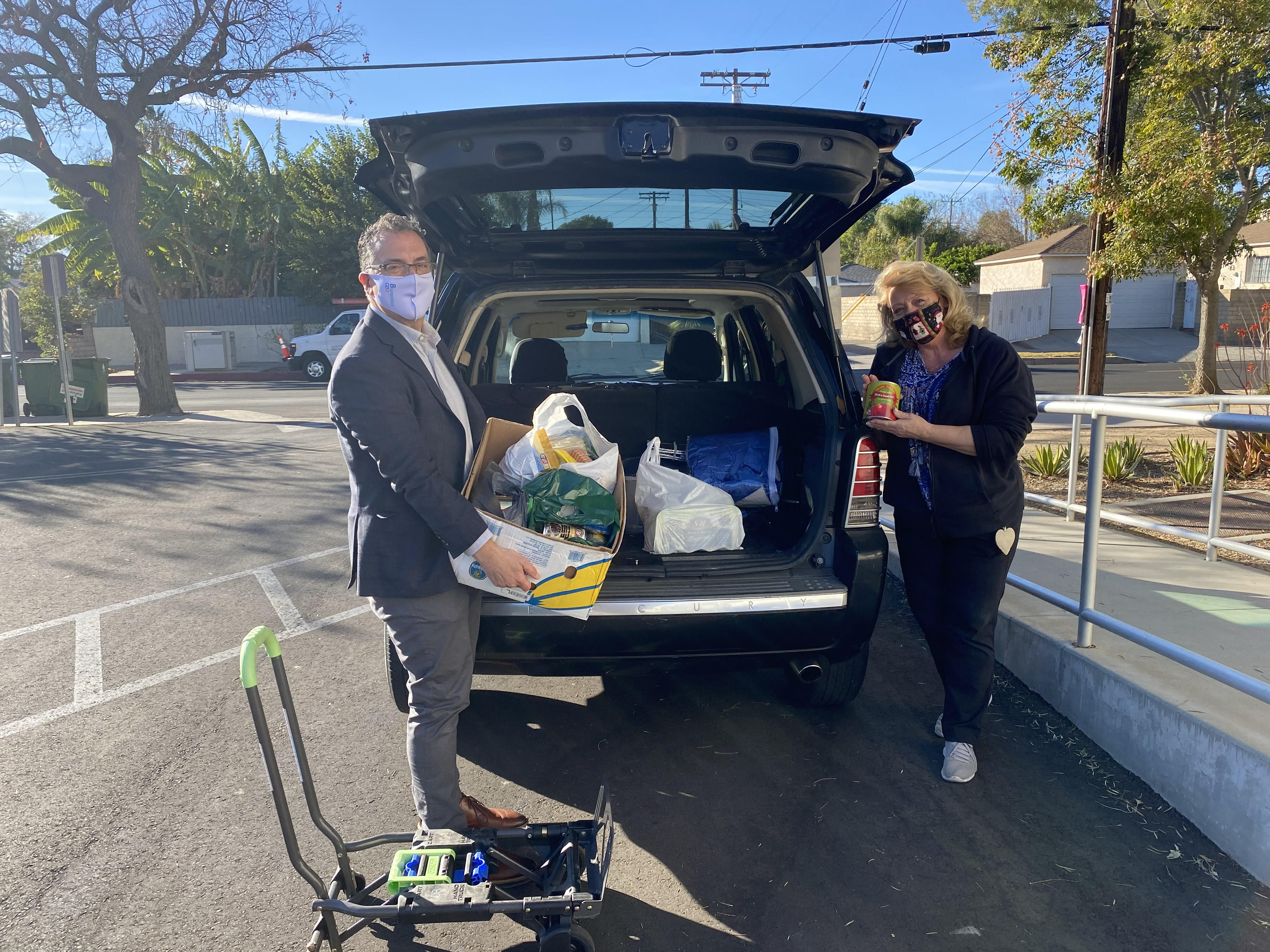 In light of the pandemic, this year Blumenfield converted his annual Holiday Open House into a physically distanced Toy and Food Donation Drive. Blumenfield and his team safely collected hundreds of items for struggling families in the West Valley.

To learn more about this event, click here to watch a video produced by LA This Week.

Thank you to all the amazing donors who stepped up to brighten the lives of others in the community.