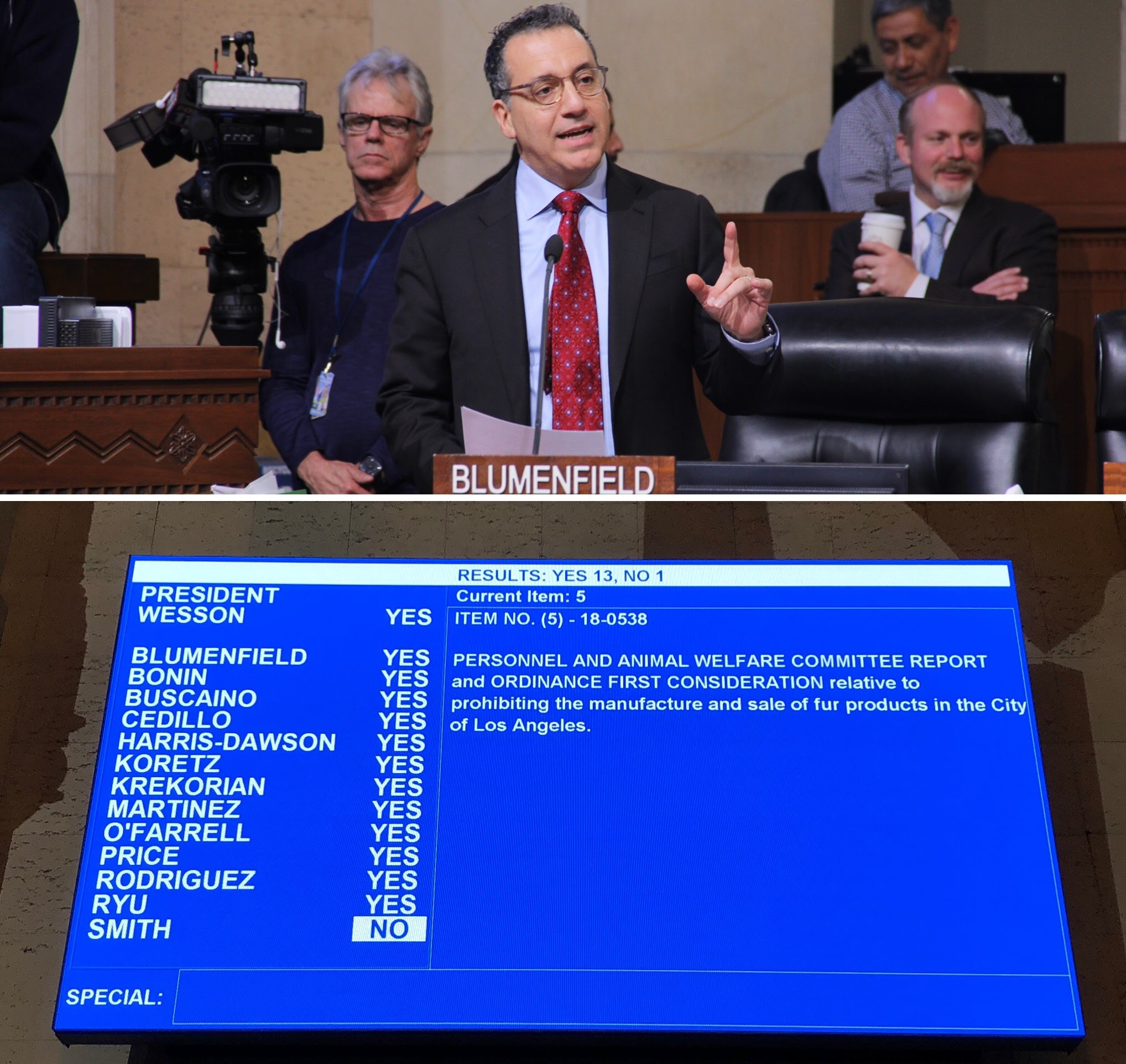 “This arcane and inhumane practice must end and today we said, loud and clear, fur will not have a future in Los Angeles,” said Blumenfield. “I am proud that our City made a giant step in ending the unnecessary killing of animals and eliminating this vile market.”

“The fur trade is senseless and brutal to animals. Today’s ordinance to stop the manufacturing and retail sales of animal parts is long overdue,” said Councilmember Paul Koretz. “The world looks to Los Angeles for fashion trends and this will be one we can be proud of.”

This ordinance will take effect on January 1, 2021 and specifically prohibits the sale of products and apparel made in whole or in part of fur or any fashion accessory, such as handbags, shoes, hats, earmuffs, and jewelry. It had to be voted on during two different Council sessions because the vote was not unanimous.

More than fifty million animals including foxes, chinchillas, minks, raccoons, dogs and rabbits are killed for their fur every year. The fur industry is one that has consistently been associated with inhumane practices.

Animals who are cultivated solely for their fur spend their lives in cramped cages, subject to deplorable living conditions. Common practices include gassing, electrocution, suffocation and neck breaking. Electrocuting fur-bearing animals anally and genitally is a slaughter method used frequently in the industry to limit damage to the fur.

Most recently, fashion companies such as Michael Kors, Jimmy Choo, Versace, Gucci, Burberry, Diane von Furstenberg and Chanel have made commitments to remove fur from their line of products. Currently, in California cities such as West Hollywood, Berkeley and San Francisco have adopted similar bans.

Blumenfield has been an animal rights advocate throughout his career and has authored many pieces of humane legislation on both the state and local levels. Recently Blumenfield authored a motion called “Cruelty-Free Los Angeles” which will ensure that the City of Los Angeles only purchases supplies such as cleaning products and hand soaps that are free from animal testing. 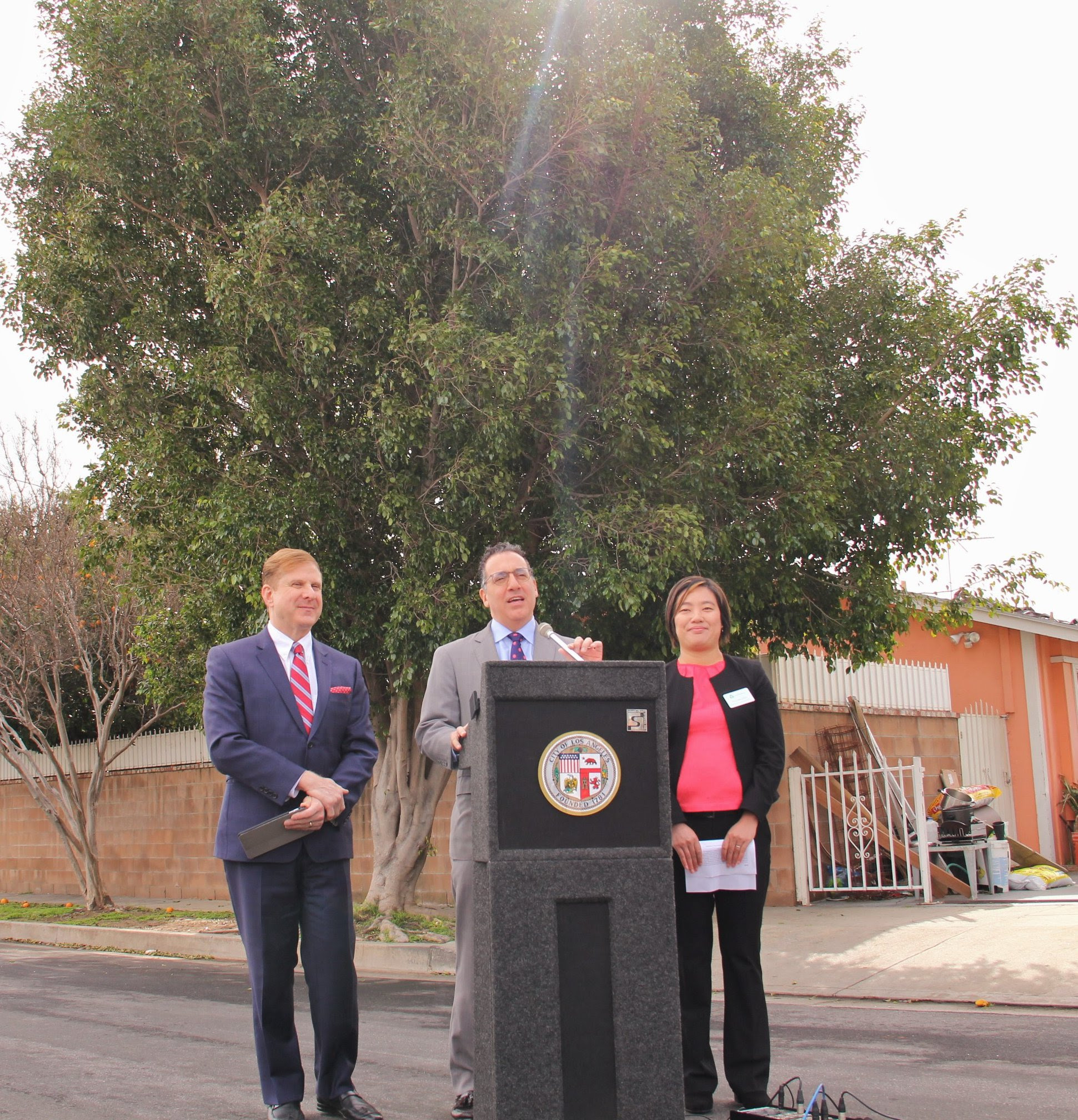 On February 21, Councilmember Blumenfield joined Controller Ron Galperin to unveil a new report and recommendations to maintain and better map street trees. Focused on how the City can better take care of the hundreds of thousands of trees its responsible for, the report paves the way for some comprehensive improvements that could add needed efficiency.

“While poorly maintained trees sometimes cost the City millions of dollars in infrastructure damage and lawsuits, trees in general can also save the City millions through reduced heat island effects and community development,” said Blumenfield. “Together with Director Adel Hagekhalil and the Bureau of Street Services leadership team, we have been working toward bringing tree related services into the 21st century. Thanks to Controller Galperin for helping to create a comprehensive framework so we can continue to modernize and build a healthier urban tree canopy.”

Since becoming Chair of the Public Works Committee, Blumenfield is proud to have significantly increased the Urban Forestry Division’s (UFD) budget because he believes that a strong urban tree canopy is so much more than just beautification. During the Great Recession, local leaders were forced to make difficult funding decisions and the urban tree canopy fell to the bottom of the priorities list. Over the last decade, the UFD has been operating, at the lowest, about 20% of what they were before 2008. In last year’s budget, Blumenfield was able to add millions of dollars to hire more tree surgeons and offer more services, but more is needed to get the division to pre-recession levels.

The Controller laid out specific improvements that should be embraced including:

To read the full report, please go to http://www.lacontroller.org/street_trees. 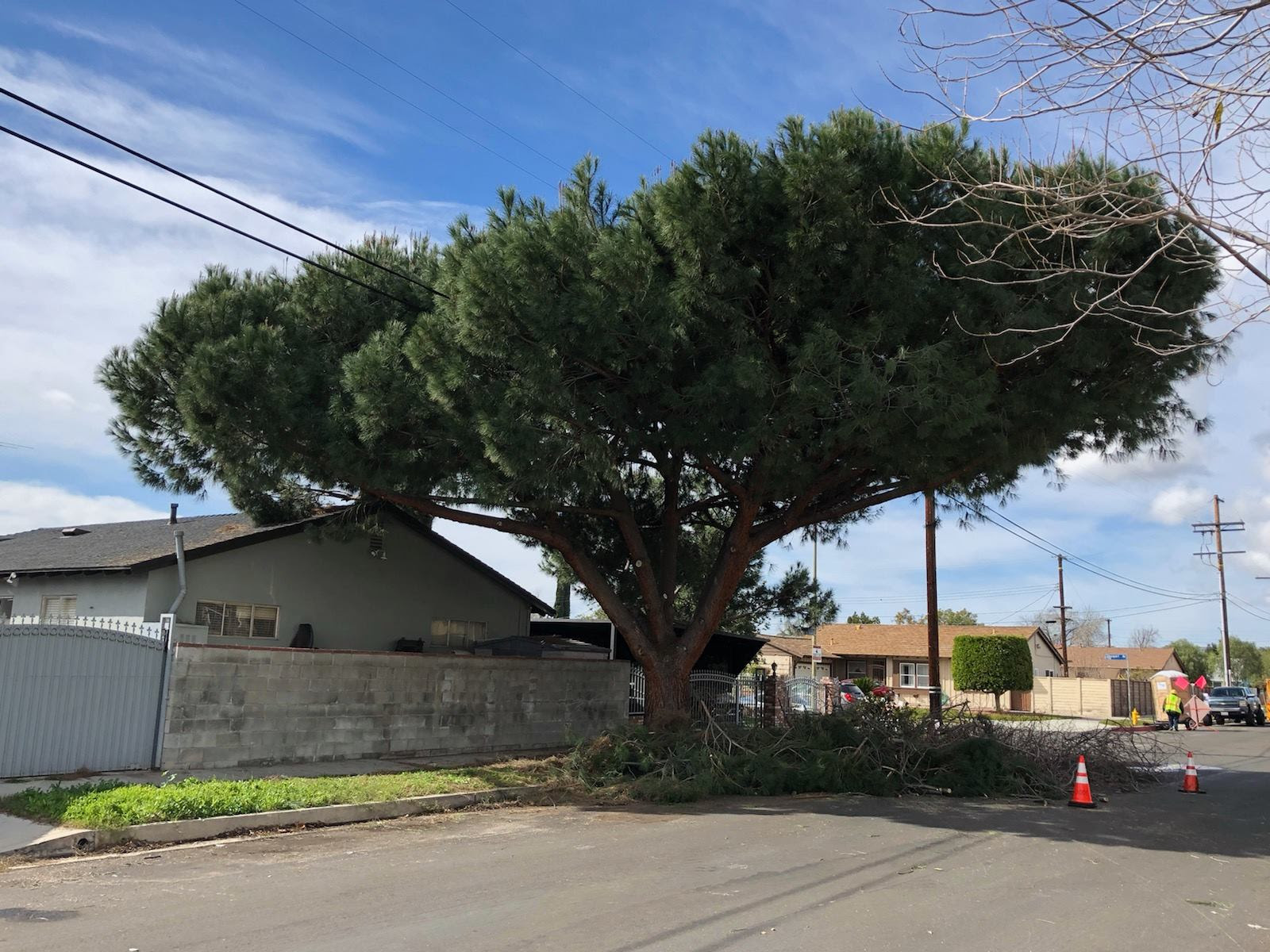 Supporting local businesses, on February 20, Councilmember Blumenfield’s motion directing City departments to review their policies on how much they charge microbreweries for water waste passed the City Council unanimously. There has been a resurgence in recent years of small-batch beer brewers opening in the Valley and throughout the City. Known as microbreweries, these local brewers produce 15,000 barrels or less each year, whereas the larger industrial breweries produce millions. In the City of Los Angeles, there has been no distinction between large and small breweries in the assessment of Industrial and Commercial Wastewater charges.

“We need to embrace the emerging microbrewing culture that has been growing in Los Angeles,” said Blumenfield. “Taking a clear look at the fee structure on issues like water waste can be a game changer in this industry.”

A local craft brewer producing less than 15,000 barrels of beer is charged the same as a large brewer that produces over 6,000,000 barrels. The wide disparity between the volume of water used at a large brewery and that of a microbrewery means that the "one size fits all" permit charges that are assessed by the Bureau of Sanitation are simply neither appropriate nor fair for a smaller brewery operation.

Blumenfield’s motion specifically instructs City departments to review permit charges for breweries and report with changes to more appropriately assess charges based on the size of the brewery’s operations and the amount of waste water discharge.

Responding to reports of disabled placards abuse, on February 13 Councilmember Blumenfield’s motion to increase the penalties for the illegal use of disability parking placards unanimously passed the Council’s Transportation Committee. The misuse of these parking placards are not only a crime, they waste resources and make it incredibly difficult to manage parking in many desired destinations.

That Council resolution, however, did not provide for a monetary penalty for violating these prohibitions. Illegal use of disabled parking placards and special license plates continued. Blumenfield’s motion specifically instructs the City Attorney to draft an ordinance to add the maximum monetary penalty allowed by State law, which is more than a $1,000.

This motion will soon be heard by the full City Council. 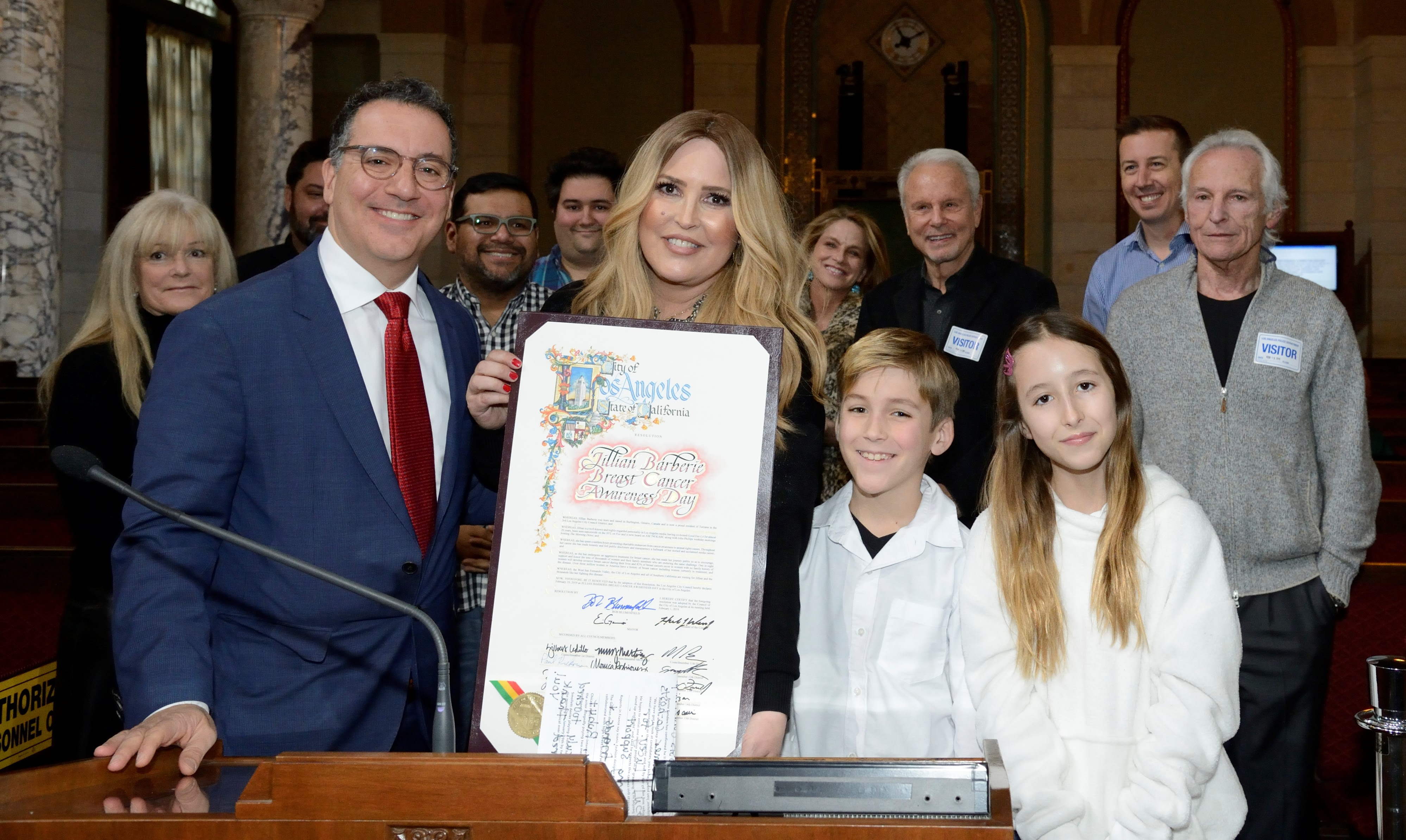 Celebrating local media legend and Blumenfield constituent Jillian Barberie, a recent survivor of breast cancer, Councilmember Blumenfield declared February 19 as Jillian Barberie Breast Cancer Awareness. Late last year, Barberie was diagnosed with breast cancer. She chose to make her journey public to encourage, support and honor the tens of thousands of women and their family members who endure the same challenge. Barberie has since undergone aggressive treatments and has used her public platform to break stigmas and raise awareness around breast cancer.

“Jillian has been a fixture of the Los Angeles media community for over twenty years. When we heard her speak so openly about her experiences with battling breast cancer, we knew we had to do something to help her raise awareness,” said Blumenfield.

From awareness events such as “Mimosas and Mamograms” for women, to her frank conversations over the air about the dangers of undetected breast cancer, Barberie helped save the lives of countless women. From co-hosting Good Day LA for almost two decades, to her work with NFL on Fox, Barberie can be heard weekday mornings on AM 790 KABC along with John Phillips for The Morning Drive. 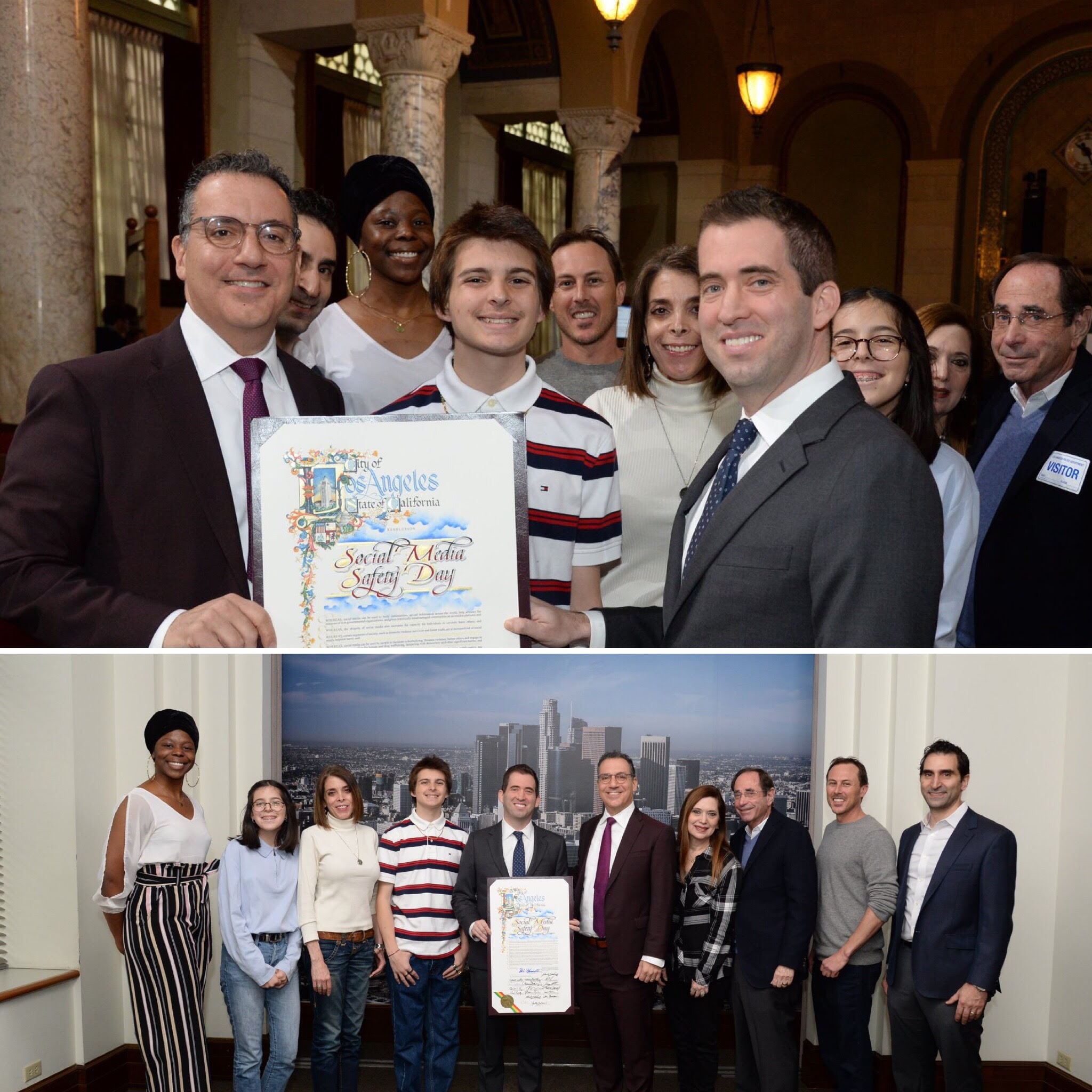 “Social media is an incredible tool that can help build communities and offer millions of people a public platform who otherwise wouldn’t have one. However, social media can also be used to harass, bully, stalk, and exploit vulnerable people all over the world,” Blumenfield said. “Cybercriminals are regularly targeting unsuspecting people and not enough is done to raise attention about prevention. There are many ways the City can help. ”

With these amazing leaders’ support, Blumenfield introduced two motions to the City Council to empower community members across the City of Los Angeles and ultimately improve social media safety at-large.

The first motion aims to implement a cyber-literacy pilot program hosted by a library in the West San Fernando Valley which will provide recurring classes and workshops to all community members.

The second motion strives to expand access to the LAPD's online reporting tool by broadening the crimes which residents can report to include prominent cybercrimes. Blumenfield’s goal is to make everyone aware that the City of LA is committed to making social media a safer platform for all. 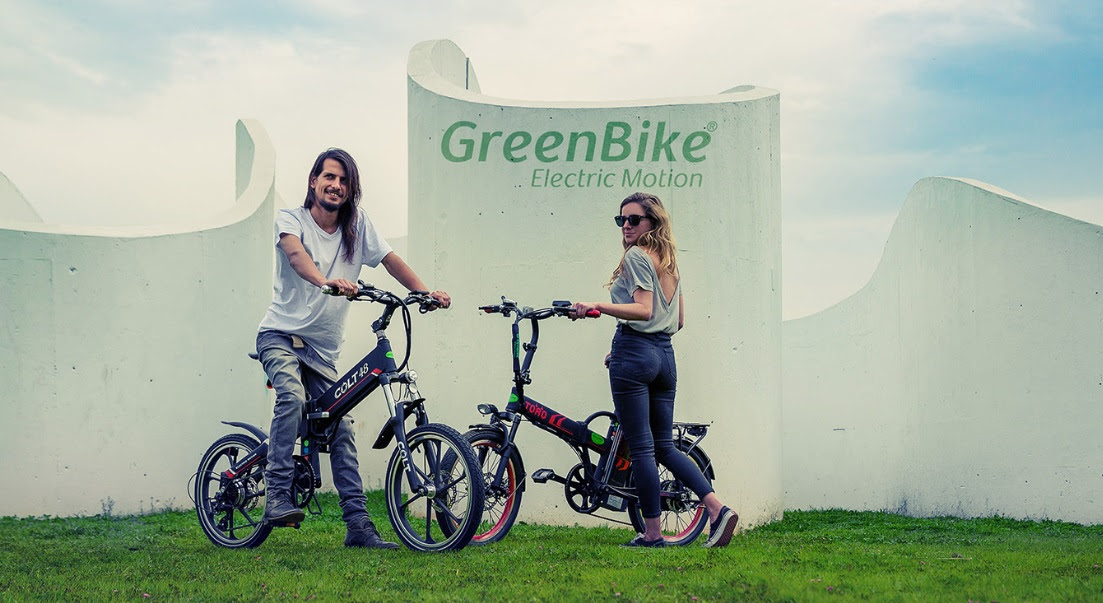 A new bike shop has opened in the West Valley, and it has grabbed the attention of many residents looking for a new commute option. Green Bike: Electric Motion is a business that sells electric bikes and scooters to anyone hoping to swap their cars out for something greener, lighter, and more cost-effective.

CEO Ori Salingre bases his operations from his Reseda shop but has customers and branches all across the world. Greenbike is sold in countries such as Germany and Israel and will soon open in Panama. He is proud of his company because it is hitting a much-needed demand for alternative transportation across the world – and particularly on LA’s streets. "Patches"  ID# A1822198-  Patches is 10 is very charming and relaxed. She loves perching on a cat tree, watching the goings-on at home or watching what happens outside the window, and is happy when you stop by to pet him. She is friendly with company and is fine with both other cats and dogs. Children can scare her though, so she will do best in an adult home. 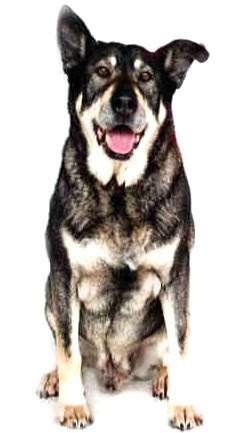 "Stewie" ID# A0927598- Everyone at the shelter loves this big Teddy Bear. He has hopeful eyes, those adorably goofy "one-ear-up-one-flopping-over" ears, a cheerfully loving smile, and is totally hug-worthy 87 pounds of pure comfy cuddliness. Stewie is 11 with a delightfully soothing-sweet personality.

The volunteers love Stewie and take him for lots of walks, to spend time with him.  He went on a Valentine's Day hike and did fantastic on his leash - he focused on his handler and ignored the other dogs.  When learning new things, Stewie responds well to corrections.  We think Stewie will do best in a home without small children. 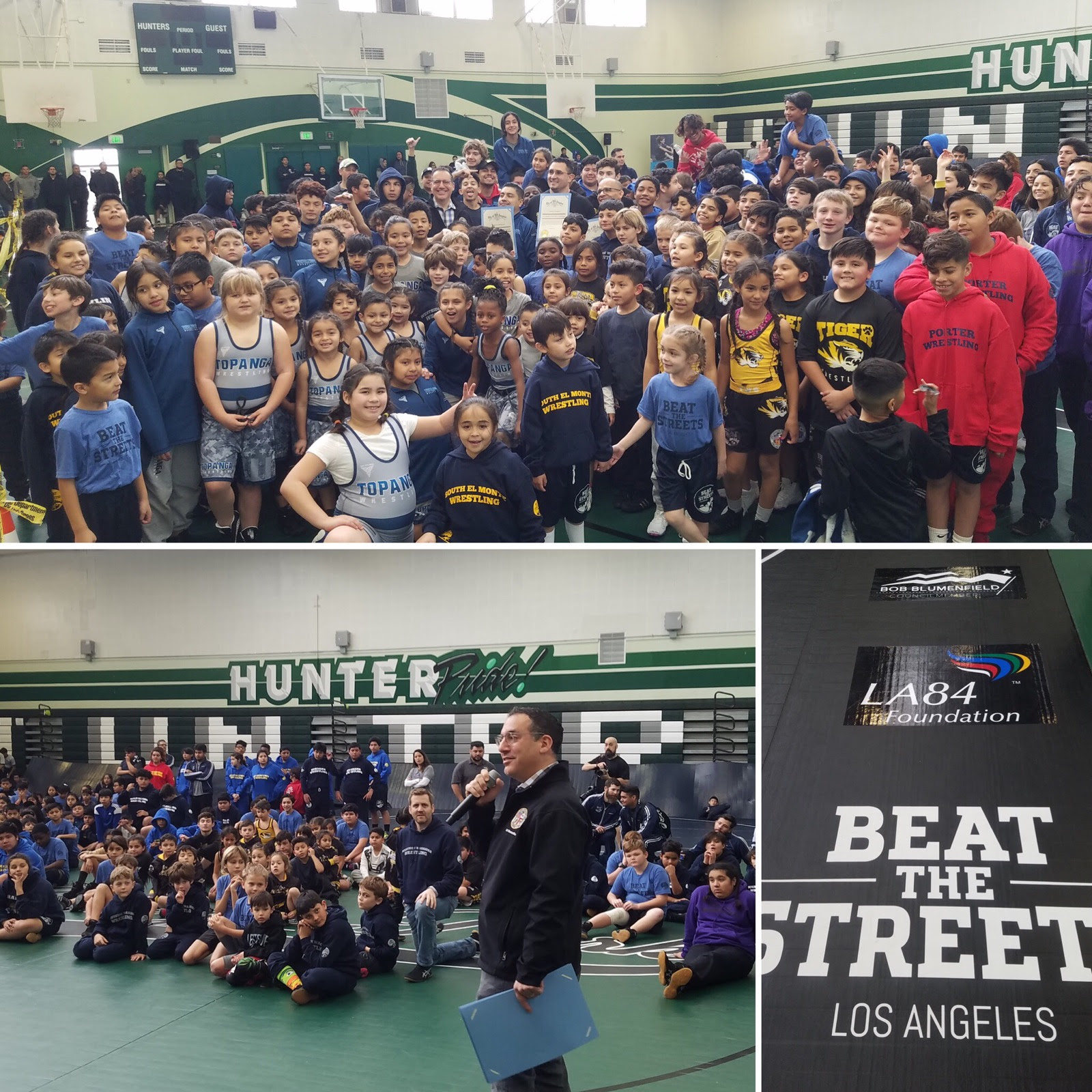 Blumenfield helped kick off the Beat the Streets LA, LAUSD Police Department and the LAPD Topanga PAL wrestling championship in the West Valley. Beat the Streets is a wonderful organization that transforms lives by empowering young people through wrestling and sports programs. 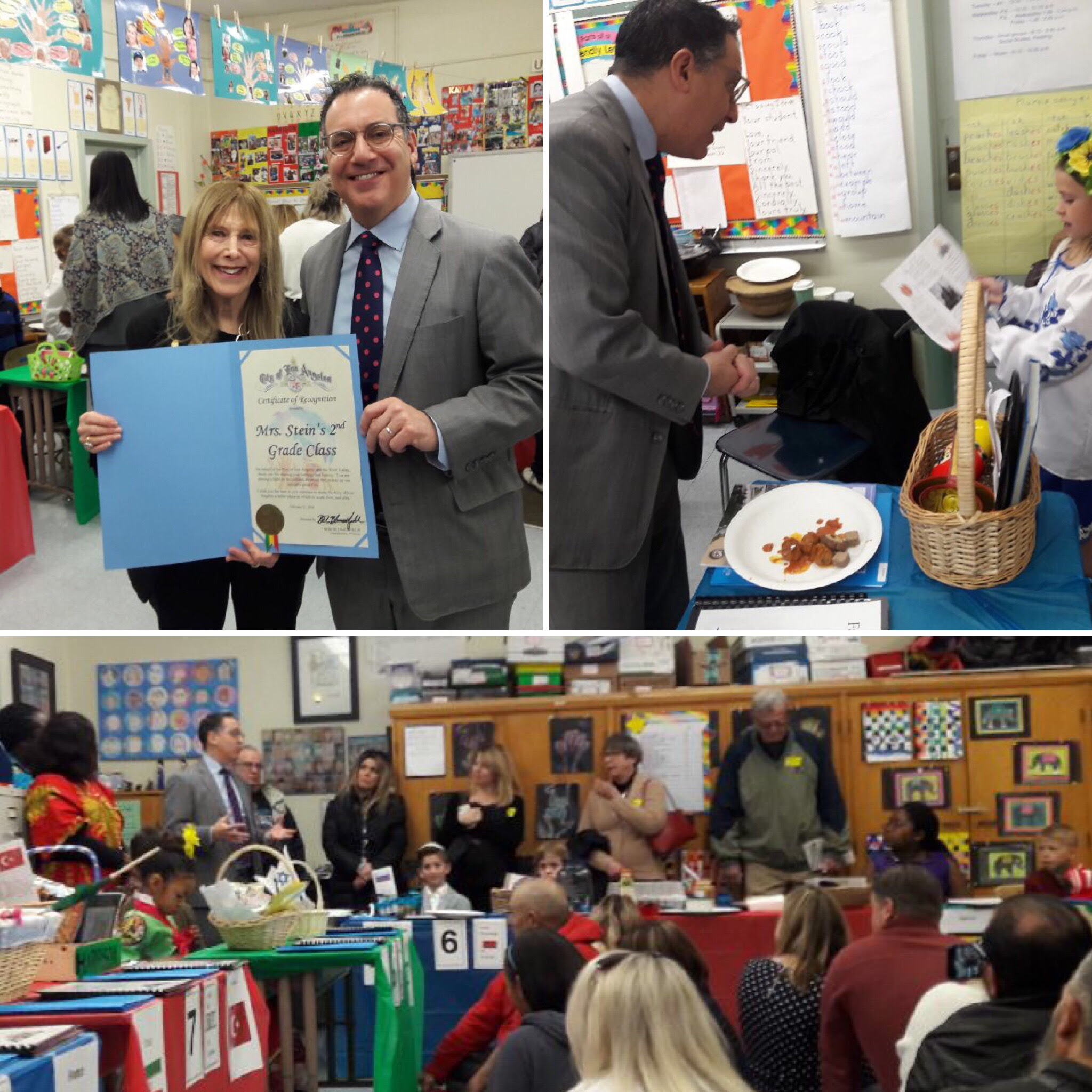 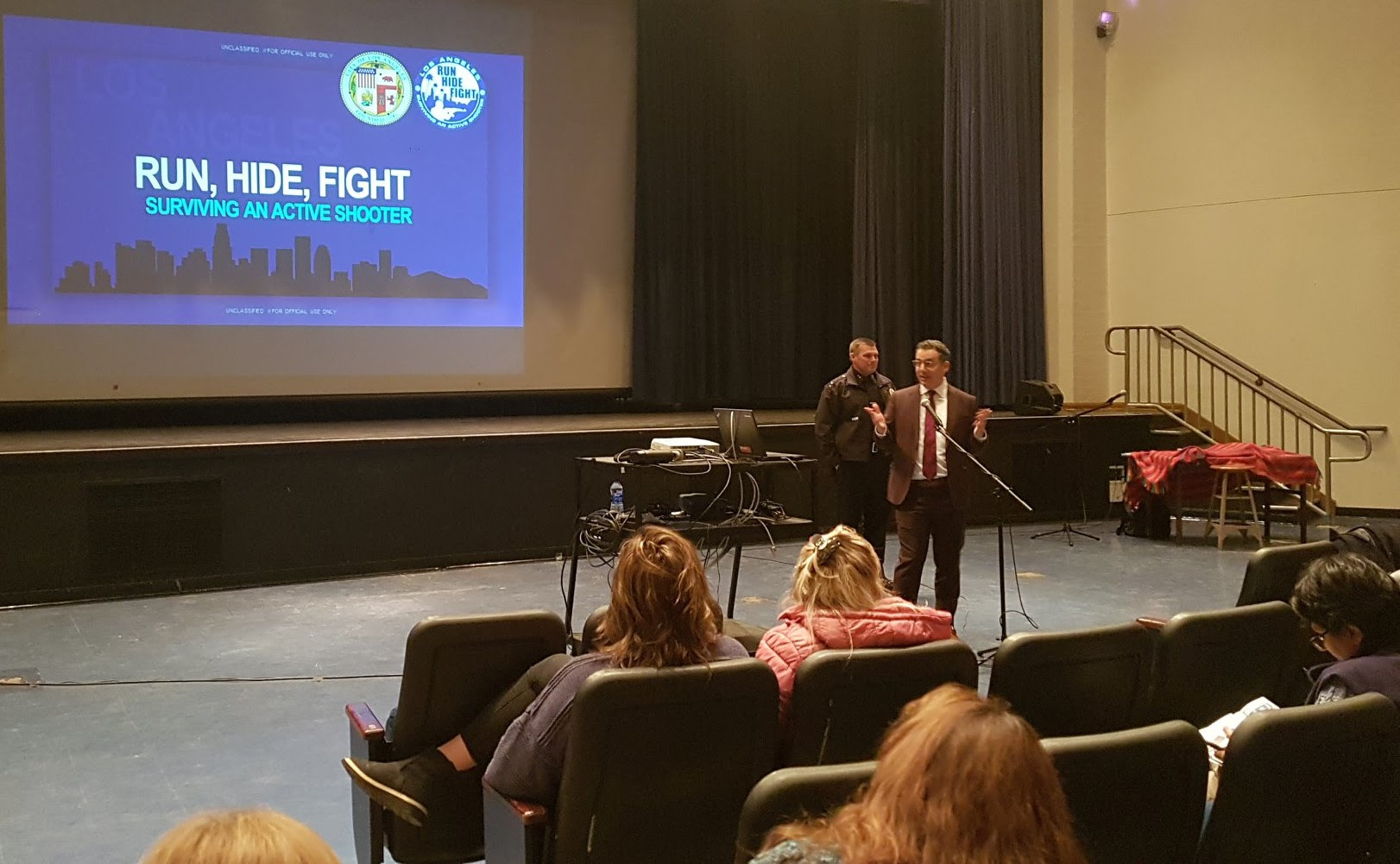 Blumenfield joined Deputy Chief Pitcher for a LAPD Operations Valley Bureau's Active Shooter Presentation at Reseda High School. He said, “On the anniversary of the Parkland shooting, we must all take necessary precautions and that starts by educating ourselves.”