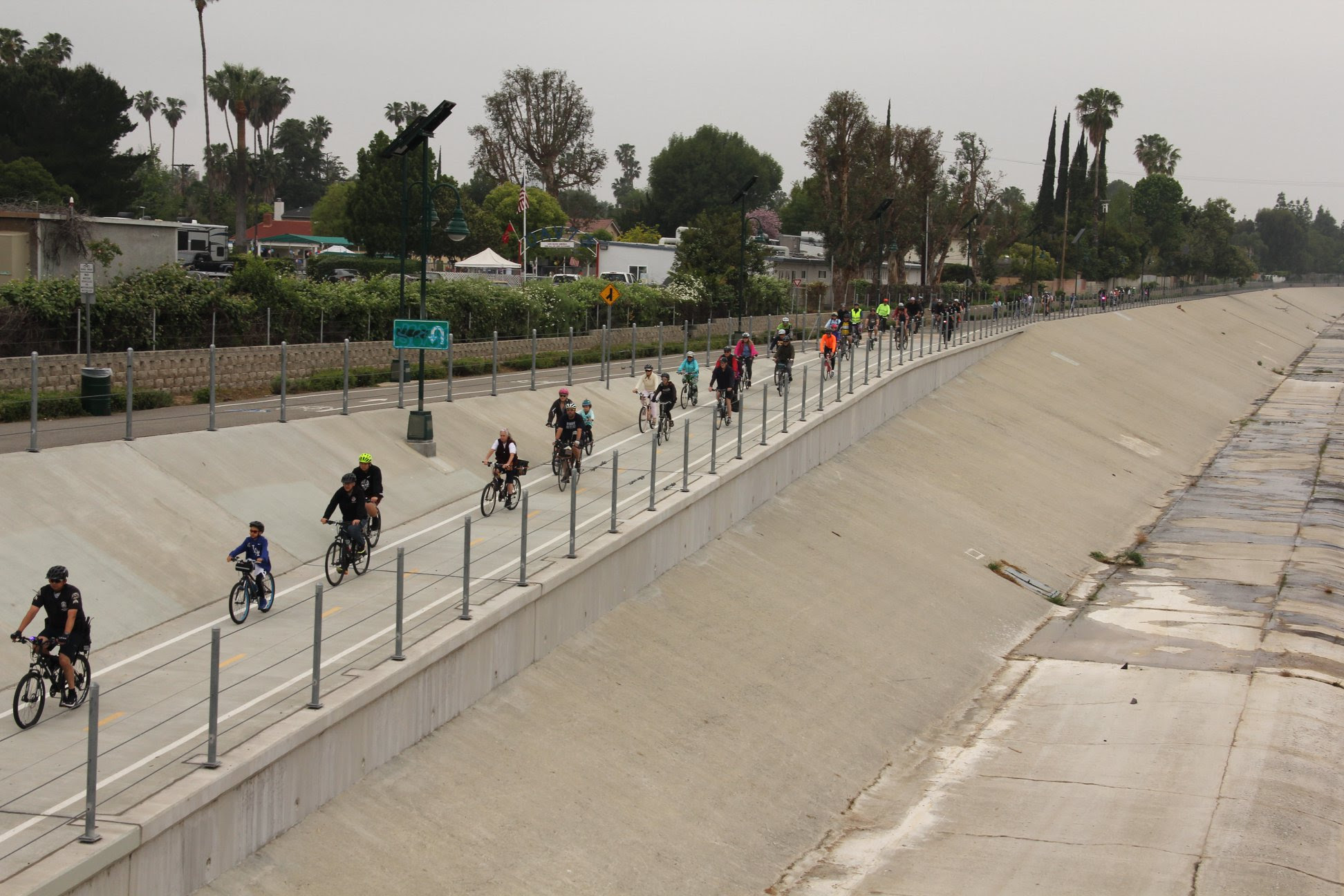 On August 7, Councilmember Bob Blumenfield introduced a new initiative to improve environmental and law enforcement along the headwaters of the LA River by establishing a pilot program giving unified authority for the area to the Mountains Recreation and Conservation Authority (MRCA). Currently the River is a confluence of jurisdictions which has led to a number of difficult to resolve environmental and quality-of-life issues. Blumenfield’s plan aims to improve the environment and safety of the area.

For the past few years, Blumenfield has worked closely with the L.A. River Walkers and Watchers, a group of concerned Reseda neighbors. On clean up walks they commonly find needles in shrubs and along the bike path, soiled clothes, fires, vandalized structures, drugs stashed under bridges, as well as people on drugs sprawled out and completely blocking the paths and parks. Additionally, downstream bacteria levels can reach unsafe levels when waste enter the river at the headwaters.

“We have made progress toward improving conditions along the LA River in our area in collaboration with Councilmember Blumenfield, but we need a unified enforcement entity for the River,” said Evelyn Aleman, co-founder of the L.A. River Walkers and Watchers. “The MRCA will bring much-needed support to neighbors living near and adjacent to the bike path, and help restore the bike path to its original use."

Numerous proposals for improving the River have been proposed, including the City’s LA River Master Plan with ambitious designs for new parks and amenities for communities. The investment of tens of millions of taxpayer dollars in river improvements is a worthwhile endeavor, however, to provide the best value to the public these investments must be well planned and include practical solutions to environmental and other hazards and nuisances that will prevent the river vision from being fully realized.

One serious and complicating factor for enforcement, outreach, and cleanup along the Canoga Park and Reseda areas of the LA River is the multijurisdictional responsibility for different sections of the channel, paths, adjacent green space, underpasses, and access points. The US Army Corps of Engineers, Los Angeles County Flood Control District, and various Los Angeles City departments (Bureau of Engineering, Recreation and Parks, Transportation, Bureau of Street Lighting, LAPD, Sanitation and others) all have responsibility for some aspect of river area maintenance and enforcement, but there is no one coordinating entity among them.

As an established, trusted joint powers entity, the MRCA will have full enforcement capabilities that cross jurisdictions. The MRCA would take responsibility for the river environment in this pilot program to patrol the area, enforce relevant ordinances, ensure safety, assist with maintenance and operations, reduce hazards, offer interpretation and educational resources to the public, provide outreach to unsheltered individuals in the area, and ensure that the river is an amenity for the local community.  Their Rangers are Sworn California Peace Officers with swift water, EMT, naturalist, and wildland firefighter training. 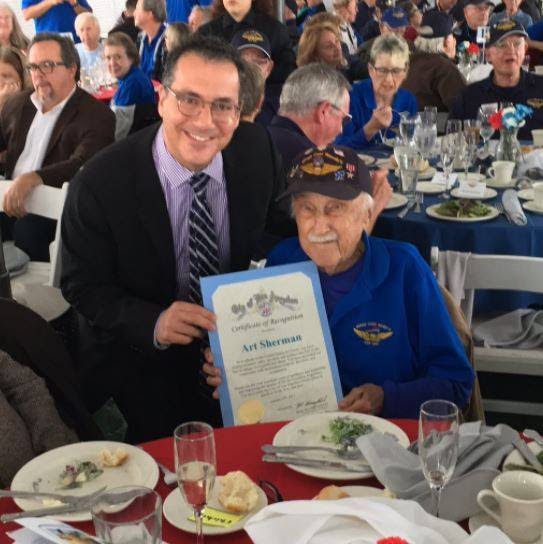 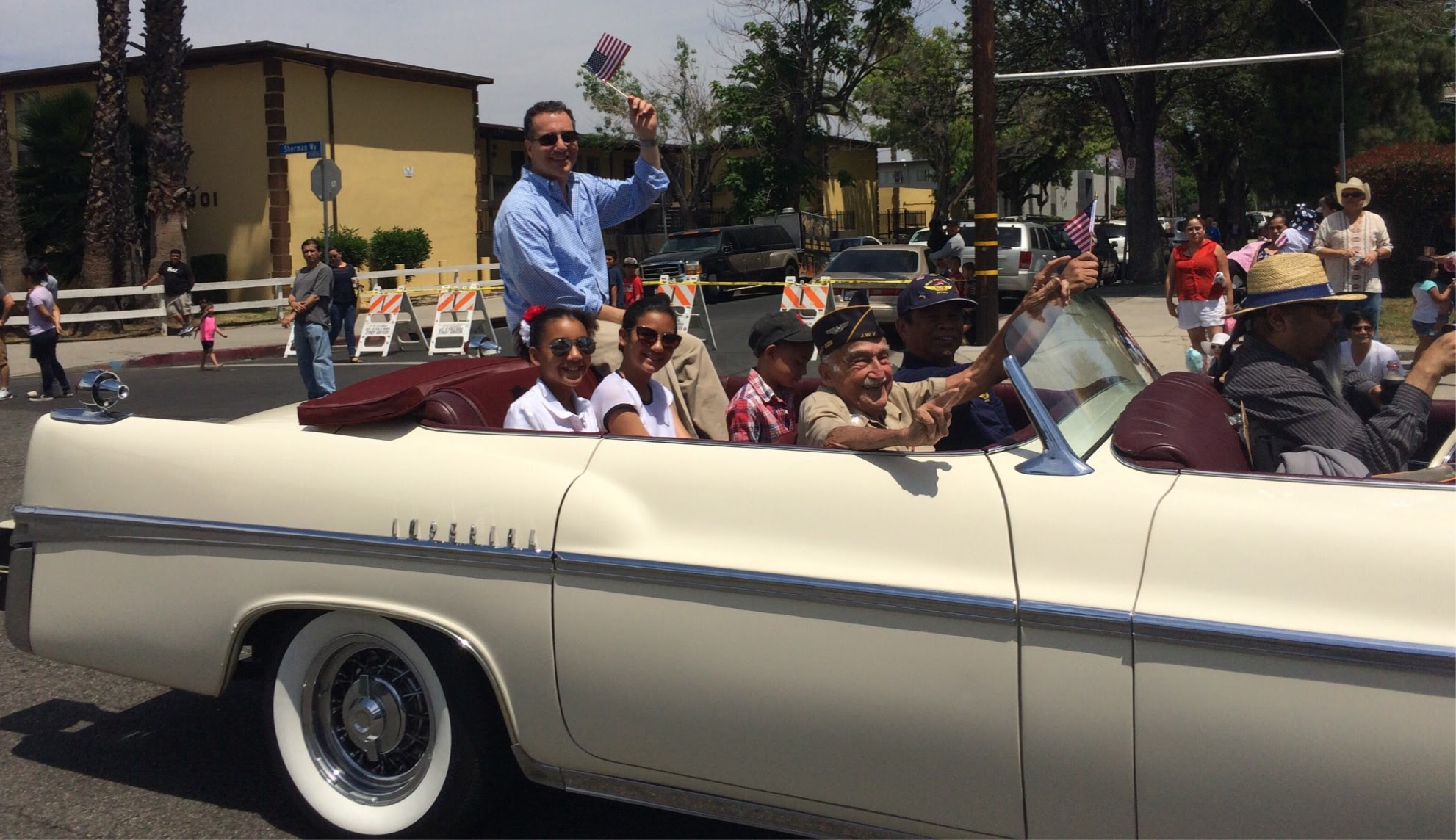 This week we lost our friend and American hero Art Sherman. He served our country during World War II as a bombardier on B-24’s and over the years has been instrumental in building the local organization Wings Over Wendy’s. This group brings together World War 2, Korean War, and Vietnam War veterans and their families to share a weekly meal and enjoy each other’s company. His tireless efforts to promote the veterans community continues to bring camaraderie and a sense of belonging to many of our local heroes.

Just last week on July 29th, Art celebrated his 98th birthday with a surprise party thrown by his daughters Judy and Linda and his fellow members from Wings Over Wendy's. It was always a treat to spend some time with Art especially when we rode together in the Canoga Park Memorial Day Parade.

Art loved our community and he strove to make it better every day, especially for his fellow veterans. For those of you who were lucky enough to know, you know that he was incredibly special and just how much he will be missed. 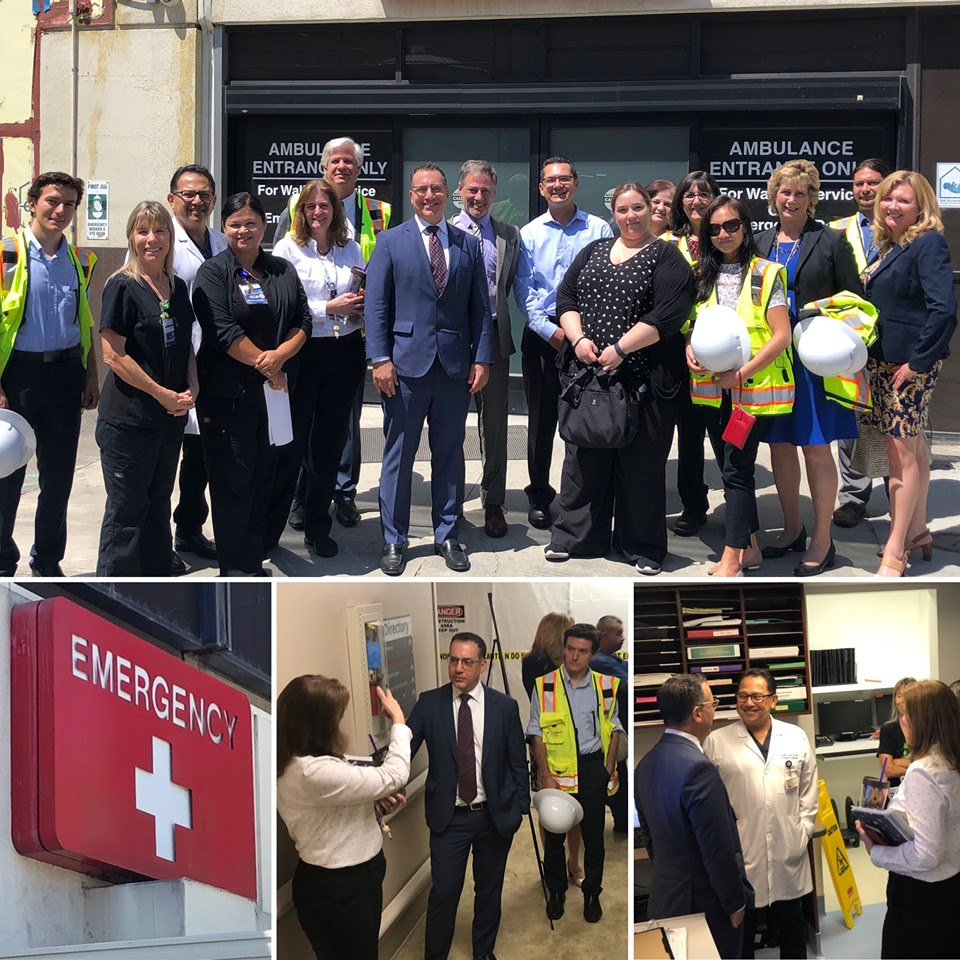 On August 8, Councilmember Blumenfield joined staff from Providence Medical Centers and Tarzana Treatment Center (TTC) to receive an update on the program he helped initiate and launch last year. The program helps drug addicted and mentally ill homeless people get off the streets and turn their lives around.

When Providence Hospitals came to Blumenfield asking for assistance to expand their facilities, Blumenfield asked for only one thing: to develop an innovative partnership to get homeless people with drug and mental health issues the help they need. Providence responded and now has trained patient navigators in their ER’s ready to connect with homeless people who enter their facilities when they typically are at rock bottom in their lives. Sometimes this is the only time they are open to accepting services. In collaboration with TTC, this program offers first rate treatment combined with transitional housing. Once they have achieved some stability, they now are connected with jobs and permanent housing. Even when folks enter the ER for an overdose they still might not enter treatment However, the first few months of the program’s operation they have seen real success.

Since its launch last year, 40% of patients engaged by the patient navigators enroll in some sort of substance abuse treatment. This is incredibly positive since historically when homeless people are approached by service providers or law enforcement on the streets, a much smaller fraction of people accept an offer for treatment.

Some folks drop out of treatment, some come back later, and many stay through the whole program. Blumenfield heard many stories of how this program is working, including some incredible success stories such as one about a man who spent many years on the streets using hard drugs and has since been able to turn his life around. For the first time in decade, he reconnected with his daughter and now is fully employed. This would have not been possible without this program and each person who is able to utilize these services is one less person on the streets in the West Valley and one more person who has improved their life.

Bringing the Community and Law Enforcement Together with National Night Out 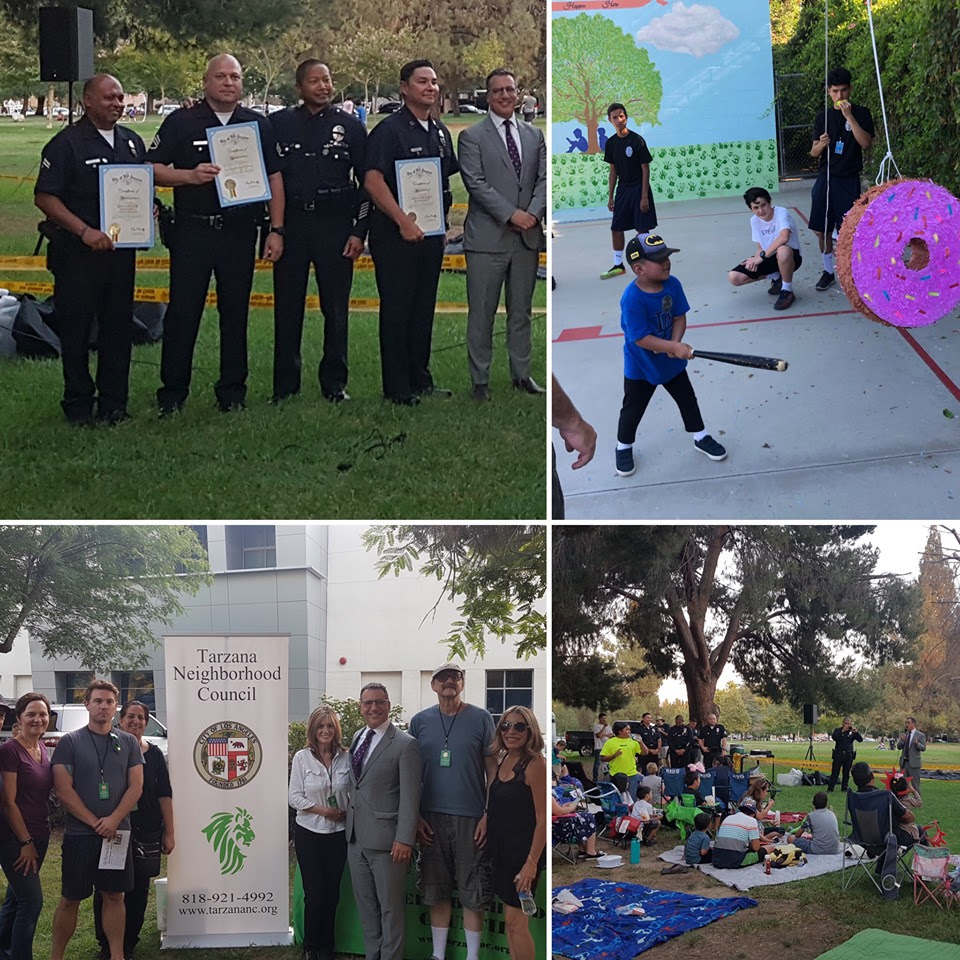 On August 6, Councilmember Blumenfield celebrated the 36th annual National Night Out, a special event put together by the West Valley Police Station to promote and encourage a strong police-community partnership. This year, National Night Out screened Toy Story 3 for families and brought various police cruisers and public safety tools to teach community members about policing the West Valley. The event was hosted at the LAPD SWAT Officer Randal D. Simmons Park in Reseda and had a large turnout.

“I enjoy being a part of this every year to build neighborhood camaraderie and foster a better relationship between law enforcement and community,” Blumenfield said.

National Night Out is celebrated across the United States. The West Valley is proud to be part of this tradition and to encourage police-community partnerships.

Concerts on the Green, Bringing Free Live Music to the West Valley All Summer Long 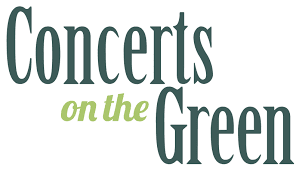 Throughout the summer, Councilmember Blumenfield has been co-sponsoring the weekly outdoor series, Concerts on the Green, which features a wide variety of live bands including local acts and tribute bands like Queen Nation and Masters of Soul. Concerts in the Park takes place in Warner Park every Sunday throughout the summer and is organized by the Valley Cultural Foundation. 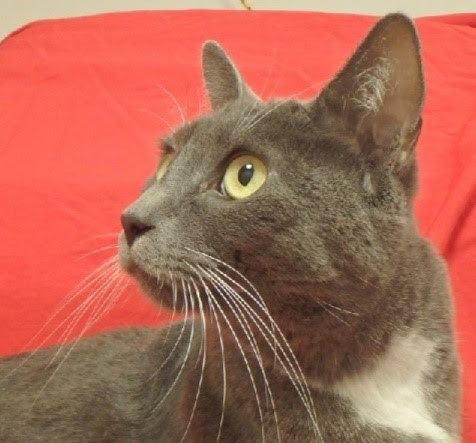 "Zander"  ID# A1870641- Zander is a handsome gray tuxedo boy with amazing big golden eyes. He’s a 4-year old cat and many be a tiny bit shy at first. Shelter staff says he easily interacts with them, asking for attention and much petting.  He’s 11 pounds and needs stay indoors-only, so he can stay safe to adorn your home and purr with you always! 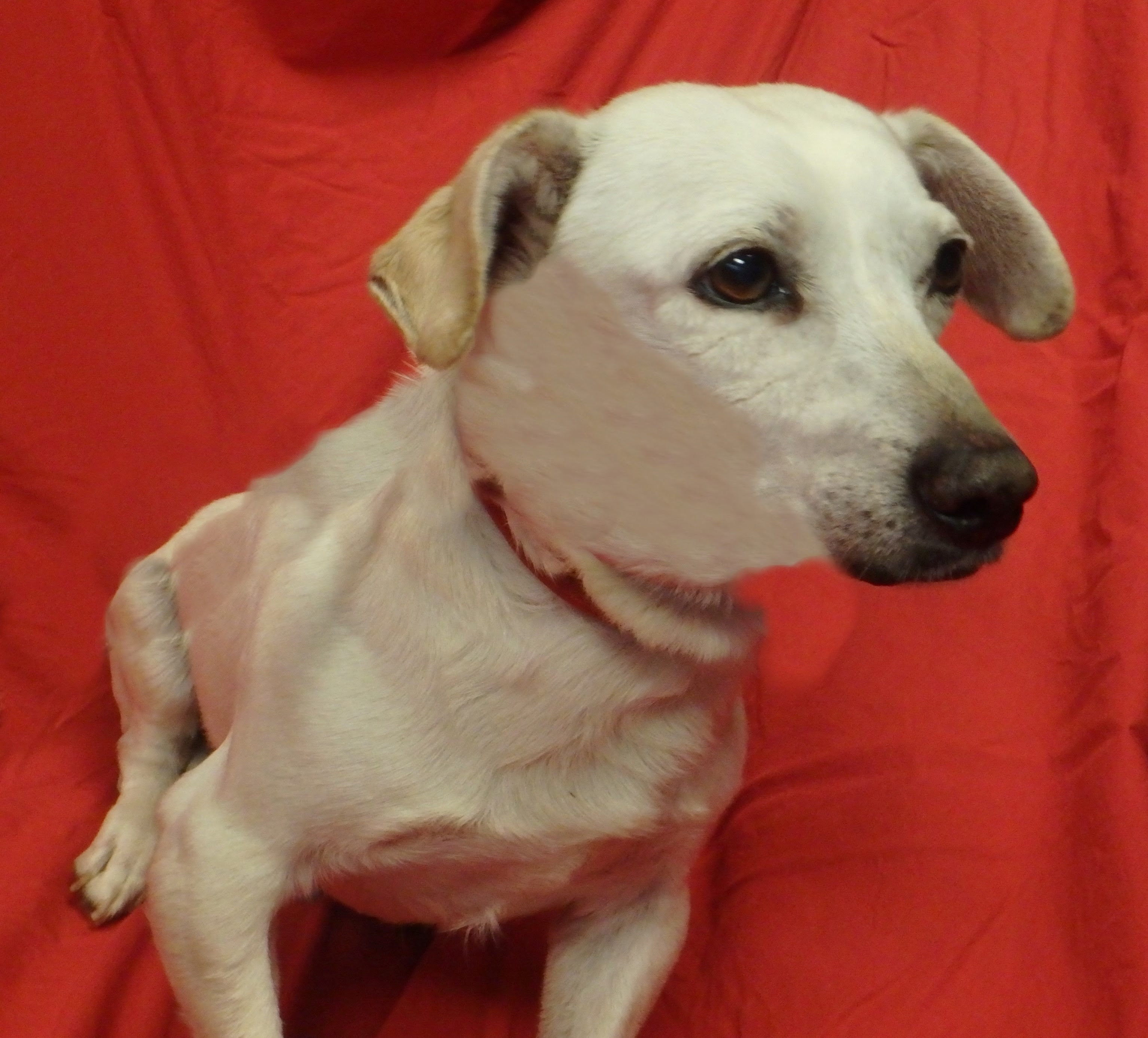 “Miguel“ ID# A1869662- He is an extremely sweet gem who, at 10, deserves to have his own home, where he can love his person or family and thrive!  He was pretty bewildered and timid when he arrived at the shelter-- now he is warming up nicely, and once he knows you, he’s sweetly friendly and loving.  He loves to run and play in the yard with the other dogs, so we think he would be great as your only dog, and a fine addition to your doggy crew if you have one.

Miguel is very much a little gentleman and only “goes” outside, just show him where outside is at your house.  He is 21 pounds, and already neutered; you can take him home with you this very day. Miguel would do best in a calm, peaceful environment.  Come meet and adopt this very kind-hearted little sweetie today!

Merci Milo is a local Woodland Hills toy shop that caters to parents who want quality toys for their children that are safe and environmentally friendly. When co-owners Caroline and Jason Rodrigues founded their business back in 2016, they recognized a real demand from parents for a local toy shop that cared for the community. Merci Milo opened to fill that space so children of the West Valley neighborhood walk into the shop and find wooden tool sets, animal figurines, baby gear, and other children’s accessories.

Caroline and Jason are residents of the West Valley and deeply care about giving back to the community. Merci Milo proudly donated to the local fire stations during the wildfires and has plans to give back to local schools throughout the West Valley. To learn more about Merci Milo’s story and their products, please visit their website at https://shopmercimilo.com/ 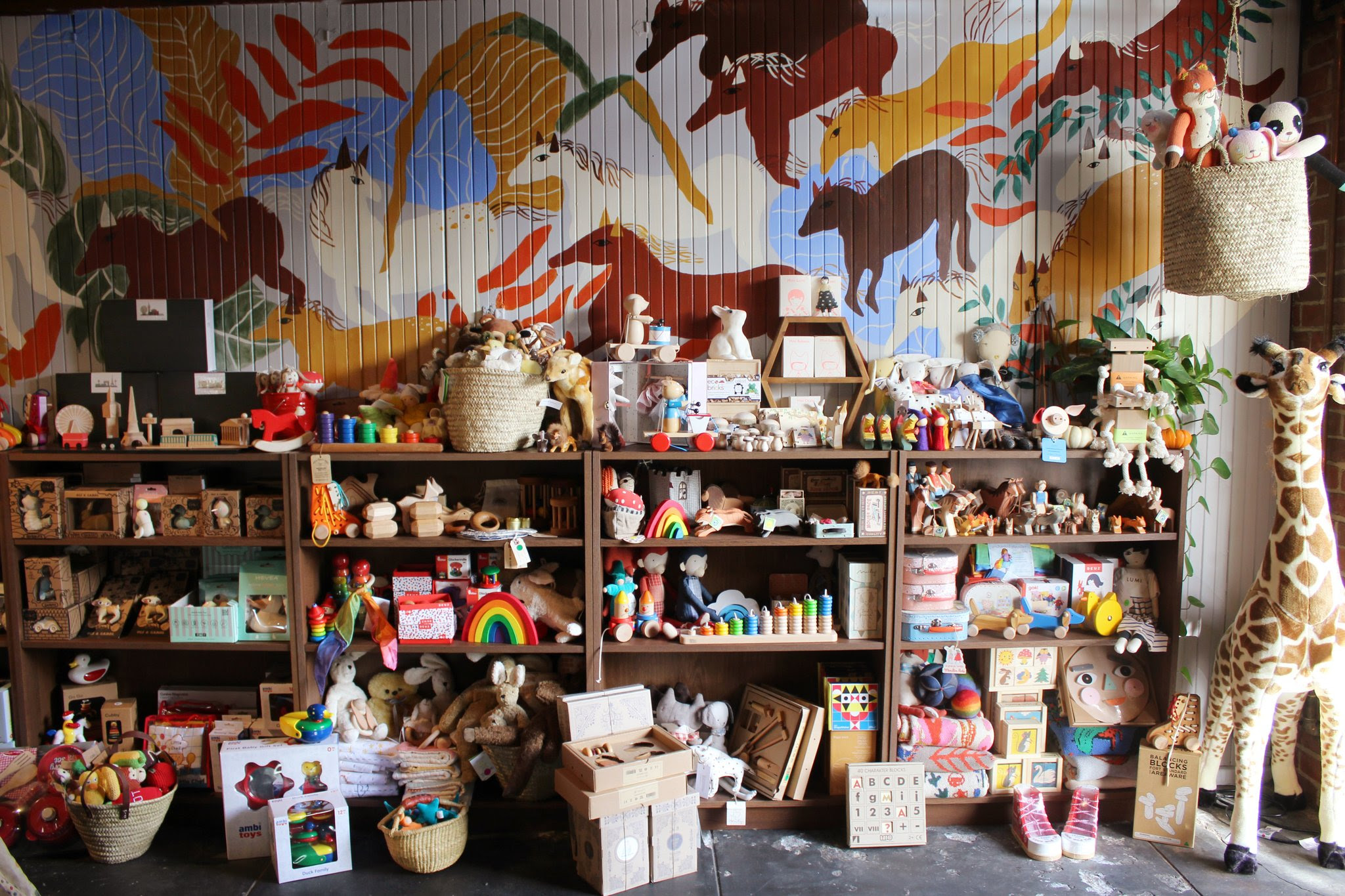 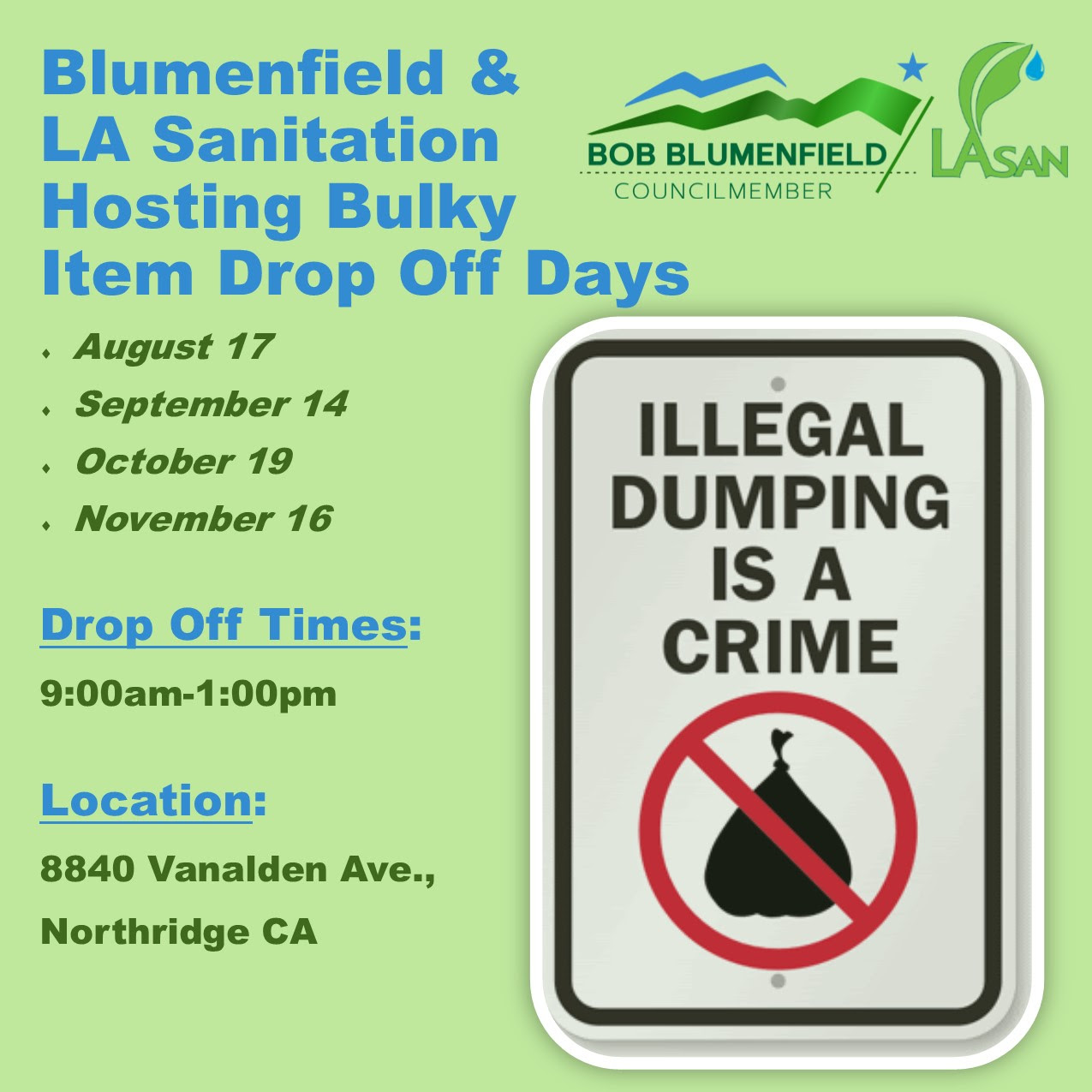 LA Sanitation is starting Bulky Item Drop Off days at the West Valley District Refuse Collection Yard. Please check the dates and times before you drop off any bulk items. For more information, please call the LA Sanitation Customer Care Center at 1 (800) 773-2489.

If you can’t make it, you can always take advantage of the MyLA311 app or call 3-1-1 to report bulky items pickup or illegal dumping for free. 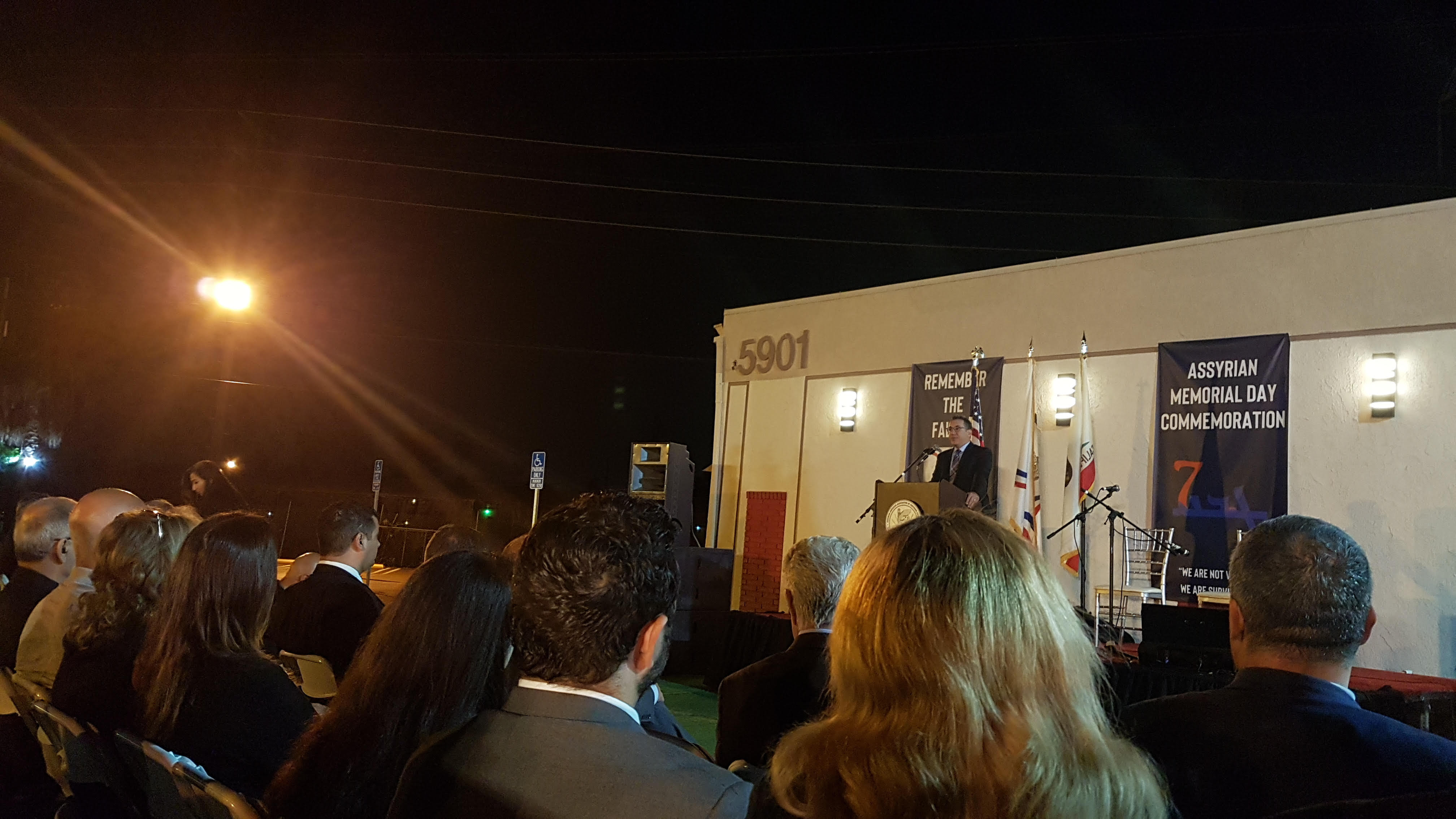 On August 7, Blumenfield joined the Assyrian American Association of Southern California to commemorate Assyrian Memorial Day. He recounted how resolute the Assyrian community was when St. Mary's Parish in Tarzana burned down and how determined the congregation was to rebuild. When Blumenfield served in the State Assembly, he co-authored legislation to establish a day of remembrance for the Armenian Genocide as well as the persecution of Assyrian and Greek populations at the hands of the Ottoman Empire. 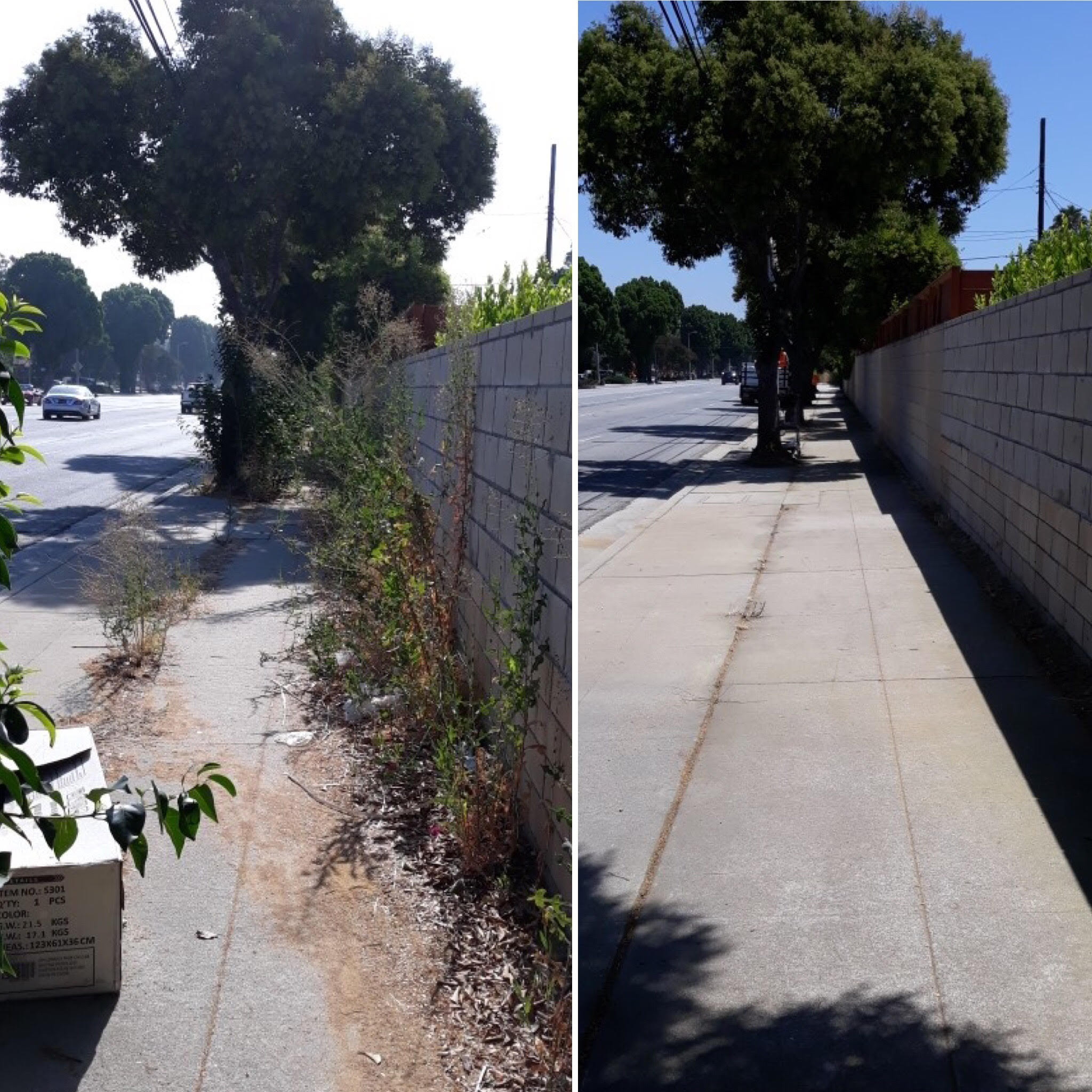 Team Blumenfield is proud to work closely with the Los Angeles Conservation Corps to help clean up our communities, like along this stretch of Victory Blvd. from White Oak to Wilbur. Last year, Blumenfield welcomed the LACC to open their satellite office next to his own District Office in Reseda and since have partnered on many clean ups throughout the West Valley. 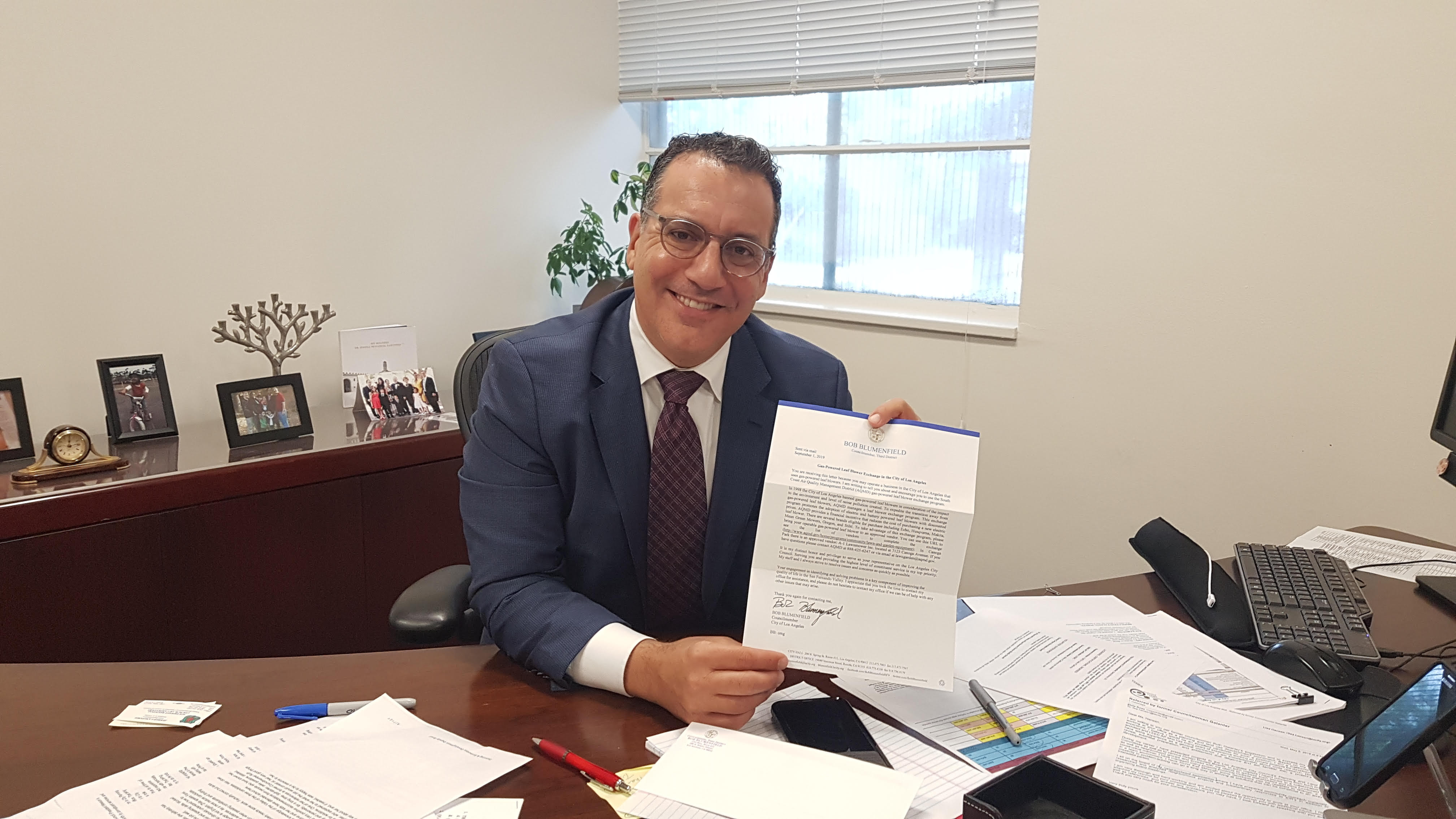 In August and September, Blumenfield is mailing out over 300 letters to businesses in the West Valley that use leaf blowers. This letter instructs business owners that gas-powered leaf blowers are illegal and there are easy ways to exchange them for environmentally friendly blowers.