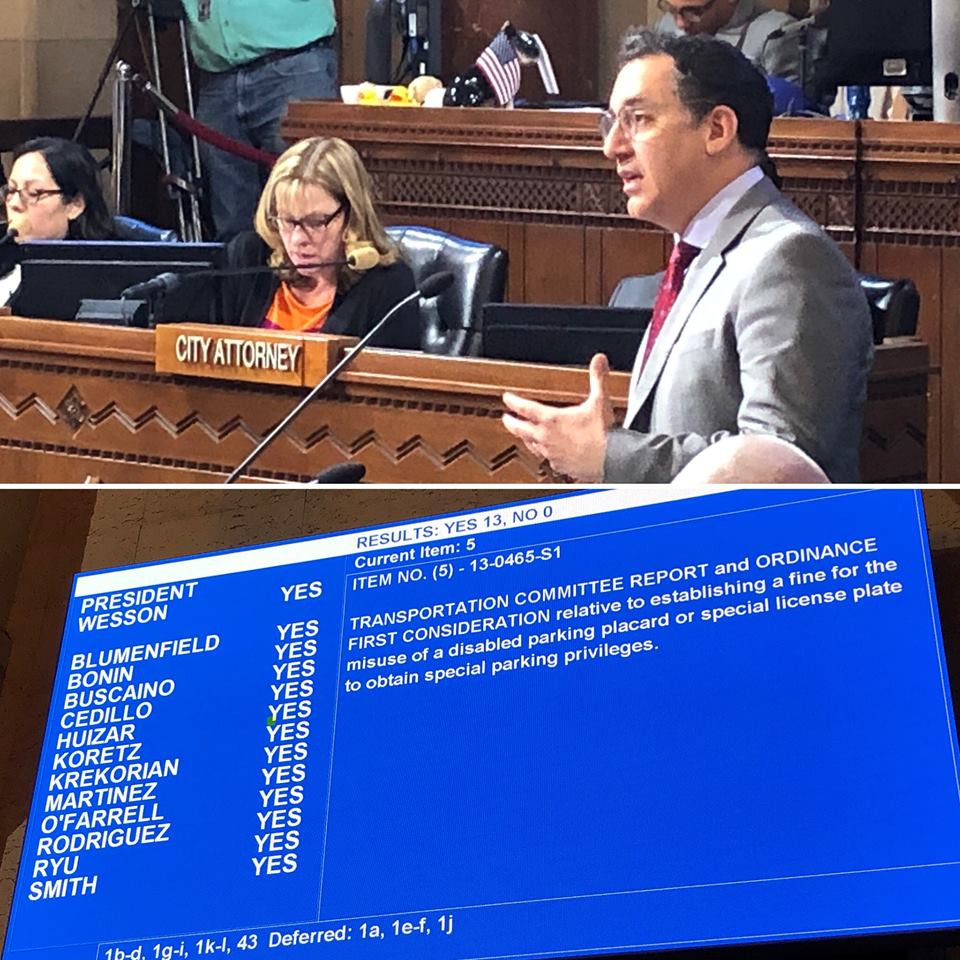 On April 9, the Los Angeles City Council unanimously passed Councilmember Blumenfield’s measure to raise fines for disability placard abuse from $250 up to $1,100 per infraction. The misuse of these parking placards is not only a crime, it wastes resources and makes it incredibly difficult to manage parking in many desired destinations.

“Taking disabled parking spots from those who truly need them is unconscionable and by increasing the fines we spread a message that it must stop,” said Blumenfield. “Last September, the DMV reported that 345 people were caught abusing disabled parking placards over four days at the LA County Fair alone. These abuses happen every day and increasing the fine will be a strong deterrent.”

That Council resolution, however, did not provide for a monetary penalty for violating these prohibitions, thus defaulting the fine to the lowest possible amount. Illegal use of disabled parking placards and special license plates continued. Blumenfield’s motion specifically instructed the City Attorney to draft the ordinance to add the maximum monetary penalty allowed by State law.

Blumenfield concluded, “Today we tell folks who may use Grandma’s placard at the grocery store, or a friends’ placard to park all day in a one hour parking spot, those actions are wrong and you better think twice before doing it again.” 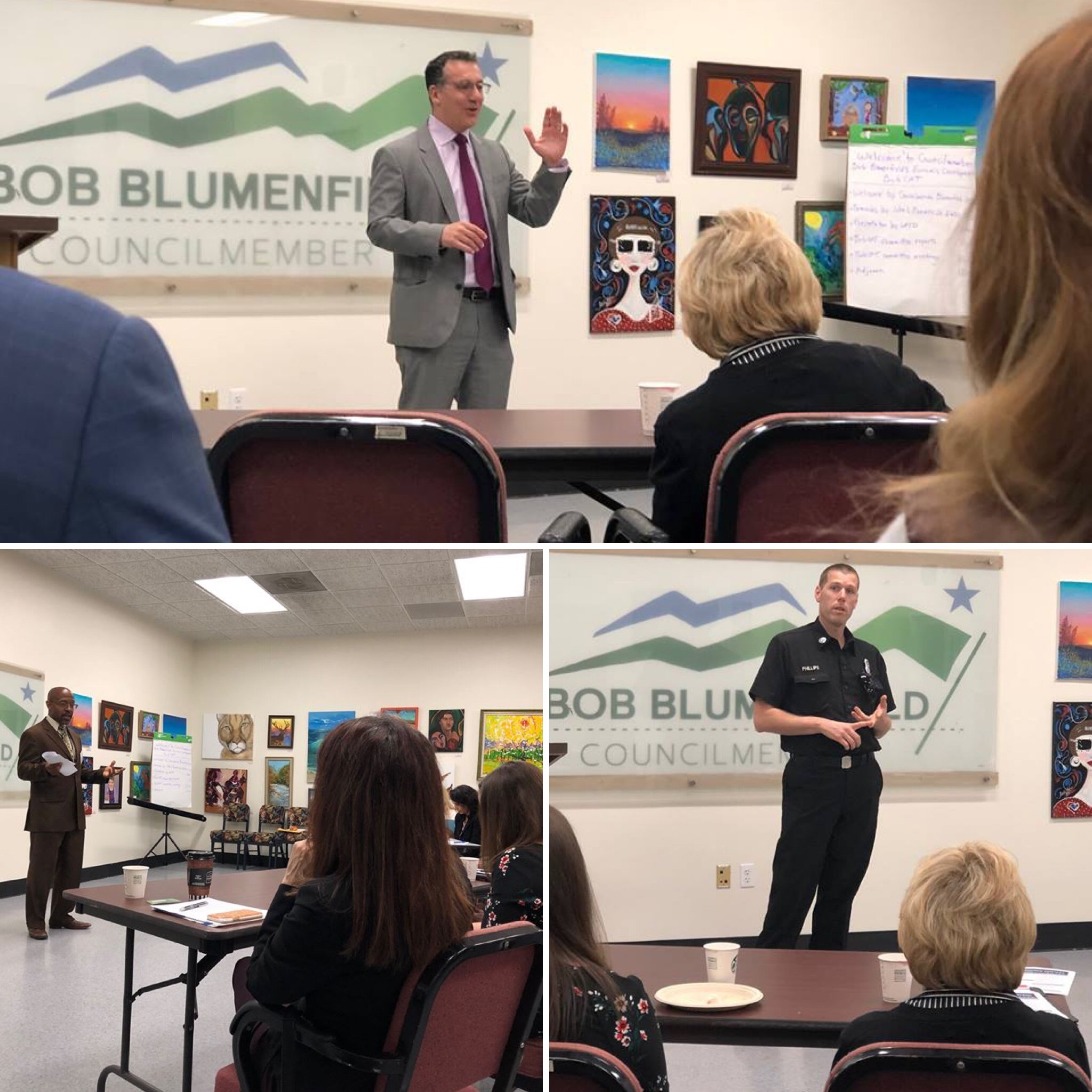 “As we all know, our small business community is the economic engine of the West Valley and I am proud our BobCAT group works so hard to keep business thriving,” Blumenfield said. “They are not only business leaders but community advocates.”

At the meeting, special guest John L. Reamer Jr., the Interim General Manager of the Economic & Workforce Development Department and Director of the Bureau of Contract Administration for L.A. City Department of Public Works, spoke about City initiatives to boost small business.

He discussed YouthSource, a job training and education program for disadvantaged youth, and the Business Response Unit, a working group to help businesses navigate through the City's bureaucratic processes and many other things.

LAFD Captain Stephen Phillips and Dr. Vicky Jensen also presented at the BobCAT meeting to gather input for the West Valley's Resiliency Plan in case of an emergency or disaster. They have joined Blumenfield at Neighborhood Councils throughout the District to promote discussions on resiliency for the community and to collect contact information for any constituent who would like to join future focus group sessions. If you would like to join in the conversation, please contact the Councilmember’s office by calling 818.774.4330 or emailing him at [email protected].

Team Blumenfield is excited for future BobCAT events, including a symposium and additional informational gatherings. Details will be posted in the near future.

In the last few weeks, Councilmember Blumenfield has visited area neighborhood council meetings to engage local leaders in the West Valley’s Resiliency Plan in case of a natural disaster or emergency. Blumenfield joined experts in public safety and preparedness, including LAFD Assistant Chief John Drake, LAFD Captain Stephen Phillips and Dr. Vicky Jensen, Chair of Criminology at California State University Northridge. Together they are looking for people who would like to participate in resiliency plan focus groups and play a role in shaping the community’s plan to withstand disasters. Blumenfield and his team have engaged Woodland Hills, Winnetka, Tarzana, Reseda, Canoga Park and the BobCAT Economic Development Team to discuss the importance of community resiliency. 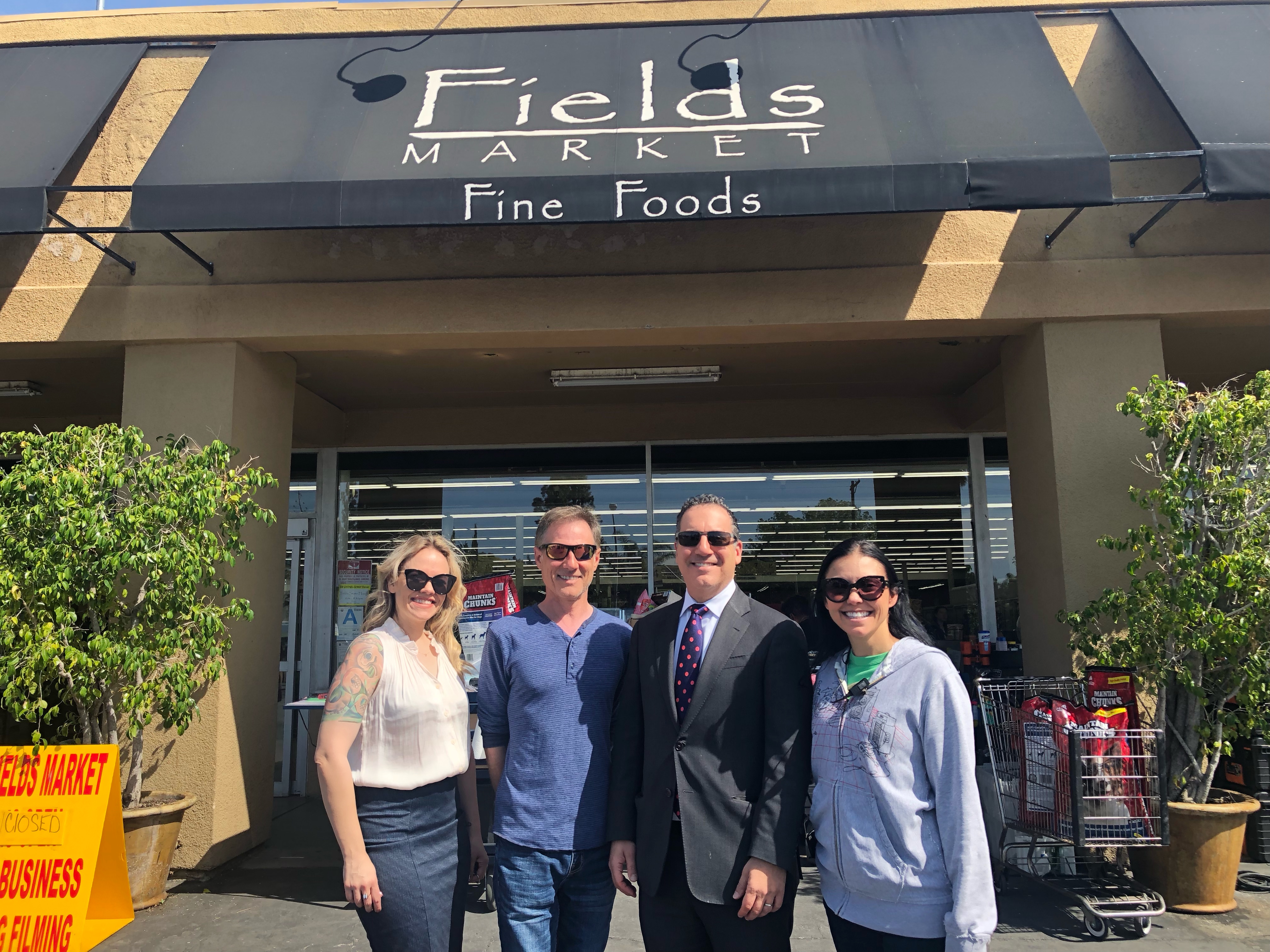 On April 11, Councilmember Blumenfield toured a West Valley-based film set for the upcoming blockbuster film, Birds of Prey, to thank the crew. The producers chose to film in the West Valley for its attractive locations and most importantly the Film and TV tax credit program Councilmember Blumenfield cosponsored when he served in the State Assembly.

“As one of the primary economic engines of the San Fernando Valley and surrounding region, the film industry has provided untold number of Angelenos with well-paying jobs for generations,” Blumenfield said. “As studios have filming options outside California, these tax credits have become more important than ever to make sure filmmakers continue producing content in Los Angeles.”

“When we incentivize studios to shoot in our neighborhoods, cast and crew start eating in local restaurants and visiting our stores.” Blumenfield said. “Not only does shooting locally help our City coffers, it also helps ensure that the many crew members who are the heartbeat of a production, can go home at night and spend time with their families.”

As a former longtime member of the California Film Commission, Blumenfield is a proud supporter of keeping the entertainment industry in the San Fernando Valley. His District Director, Michael Owens, serves as his representative on the Citywide Film Taskforce and regularly works with Film LA to encourage and manage film shoots all across the West Valley. 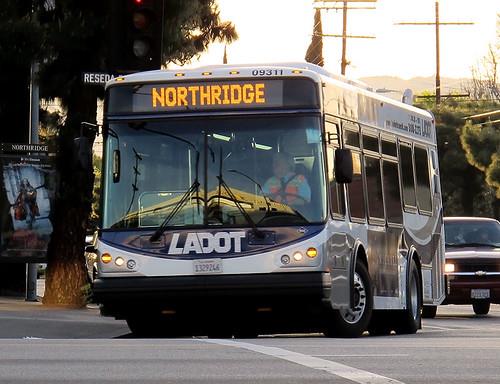 Starting April 11, Los Angeles Department of Transportation (LADOT) began offering Sunday service on the Northridge/Reseda DASH and amended its Cityride program for seniors and persons with disabilities. This has been part of LADOT’s latest mission to increase public transit accessibility for the West Valley.

“We are excited to expand services to increase transportation access on the weekends and hope this transportation alternative will reduce traffic and increase mobility for the community,” Blumenfield said. “These new changes will also increase benefits for vulnerable populations who may not have a car, or can’t drive to run errands or make it to doctor’s appointments.”

The new Cityride benefits will include free trips on DASH buses for qualified persons and many other exciting services to be announced soon.

As part of their mission, LADOT will increase the number of buses that continuously run at a time to increase convenience for riders. This is expected to take place later this year and when the new changes roll out, buses will increase frequency to every 15 minutes, run the route both ways, and improve the route on the northern end. To learn more, visit LADOT here and City Ride here. 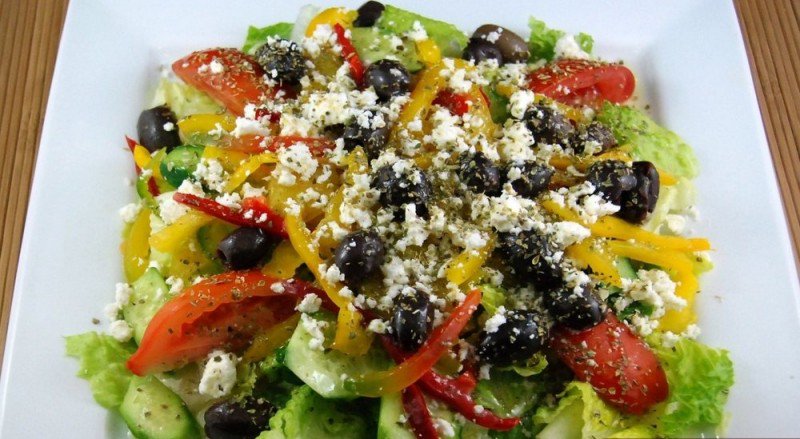 The owner of Safir, Matt Barani, opened Safir in 2001 and brought a wealth of culinary experiences from his career working in LA restaurants. From Italian to Persian cuisines, Matt honed his craft of preparing modern combinations of traditional and authentic dishes. He first opened his doors in Woodland Hills and after many years of success has expanded Safir to a second restaurant in Santa Monica. To learn more about Safir, stop by their restaurant in Woodland Hills where you will find an inventive cuisine and fantastic service. 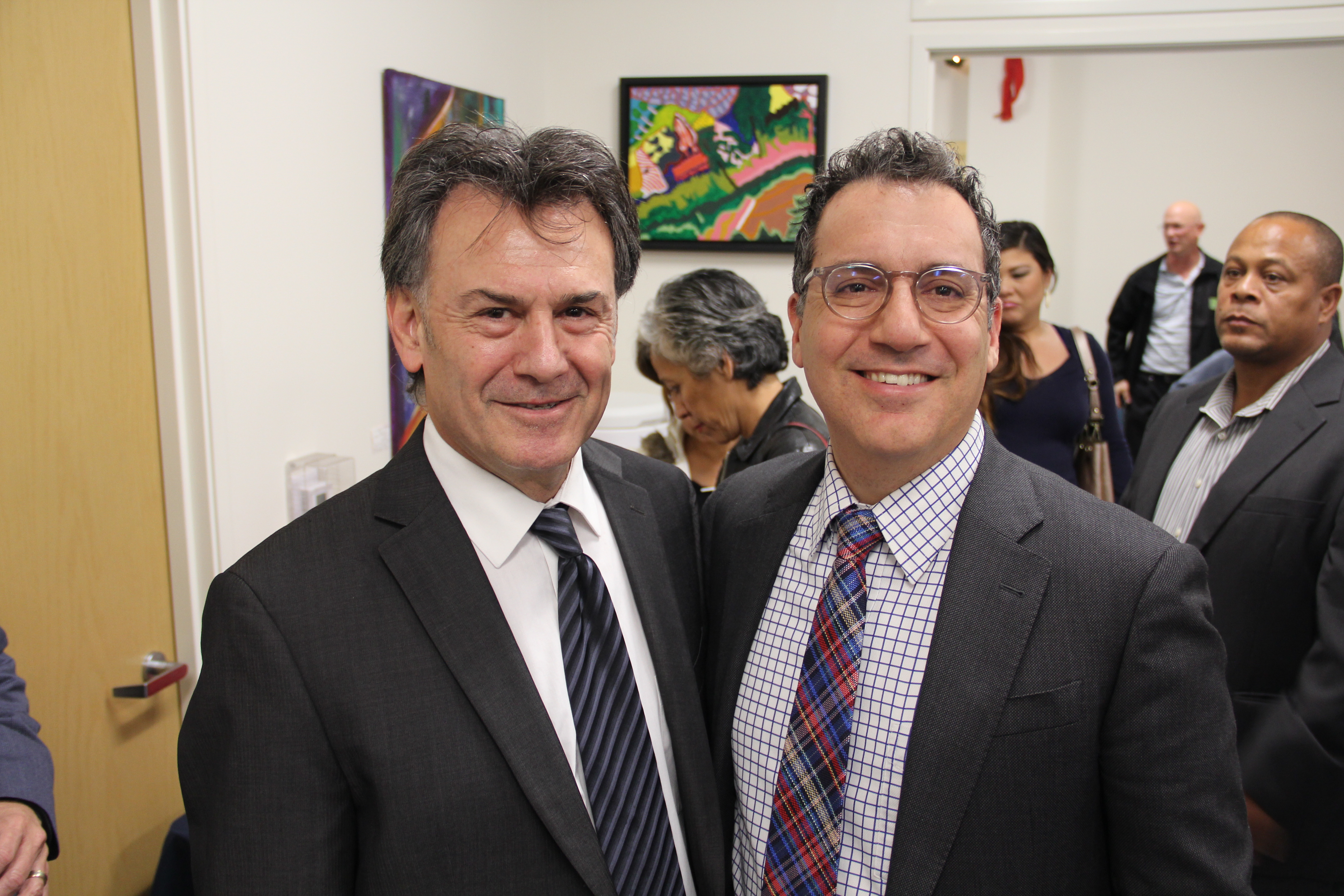 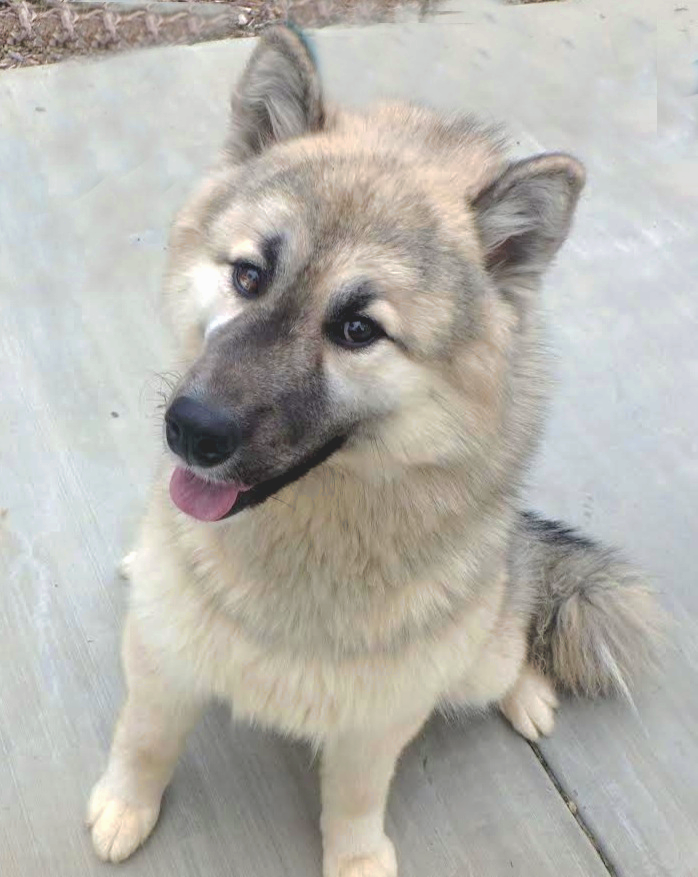 "Allie" ID# A1850253- Allie is only 10 months old and is incredibly friendly. She is instant friends with everyone and loves people. Sometimes she gets so enthusiastic that she jumps up on people, so we definitely suggest some training for her, to keep her abundant joy and enthusiasm properly directed. 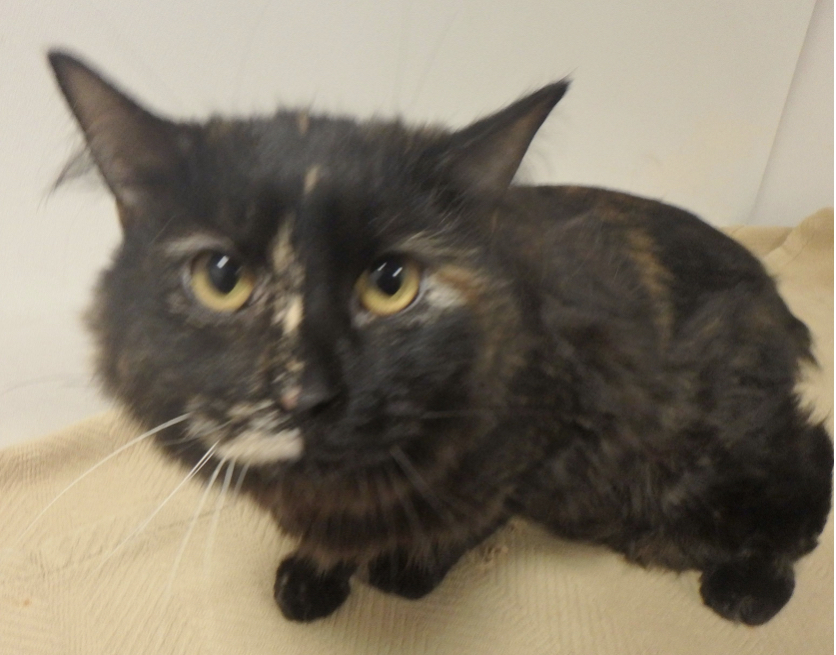 “Madame" ID# A1841684- Madame is quite the character -- delightfully loving and adorably quirky. Like her most unique personality, Madame has fur that is not too long, not too short either; and her chin is black on one side, orange on the other. She's a bit of a talker, too. Come meet Madame, fall in love and take her home today! 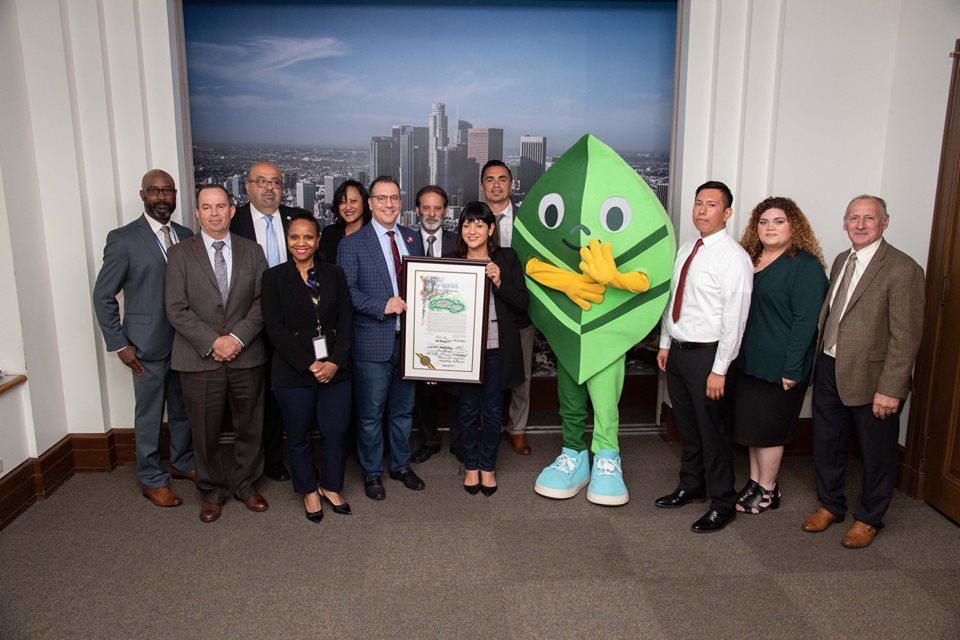 On April 16, Blumenfield and the City Council celebrated Arbor Day in City Hall to raise awareness about our urban tree canopy, one of the most important assets in the City of Los Angeles.

Arbor Day began when President Teddy Roosevelt in 1907 argued trees are not only useful, but they also add comfort to a community. Blumenfield said, “I cannot agree more that trees are a vital resource to our city and nation. They help us combat the urban heat island effect, global warming, and poor air quality and much much more.”

Blumenfield has been motivated to change the way the City of LA thinks about trees. For too long, the City put urban tree canopies at the bottom of its list of priorities during budget discussions. Since the Great Recession, the Urban Forestry Division has operated at about 20% of what they were before 2008. Since Blumenfield became Chair of Public Works Committee a year and a half ago, he has made major strides to reverse this. As a supporter of a strong urban canopy, Blumenfield was proud to celebrate Arbor Day with his colleagues Councilmember David Ryu, Director of the Bureau of Street Services (BSS) Adel Hagekhalil, and Commissioner Cecilia Cabello for their shared commitment to the health of our urban tree canopy. 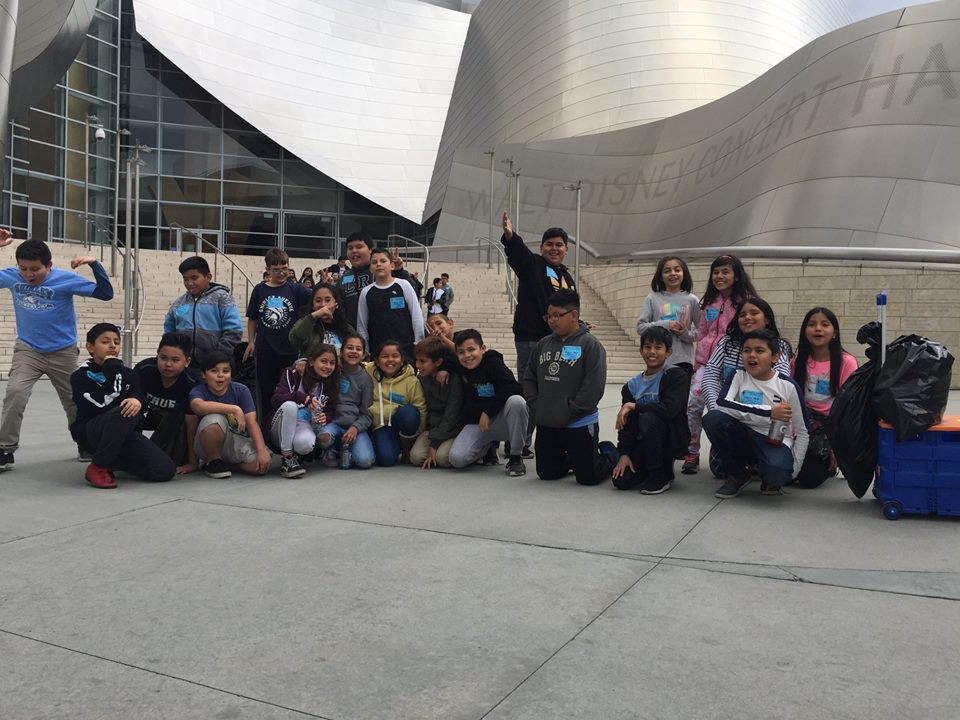 Councilmember Blumenfield provided the 5th graders of Shirley Avenue Elementary School with a bus for their recent field trip to historic Downtown LA. If you know of a community organization in need of bus transportation, his office is always happy to assist. Please visit his website for more information: http://blumenfield.lacity.org/bus. 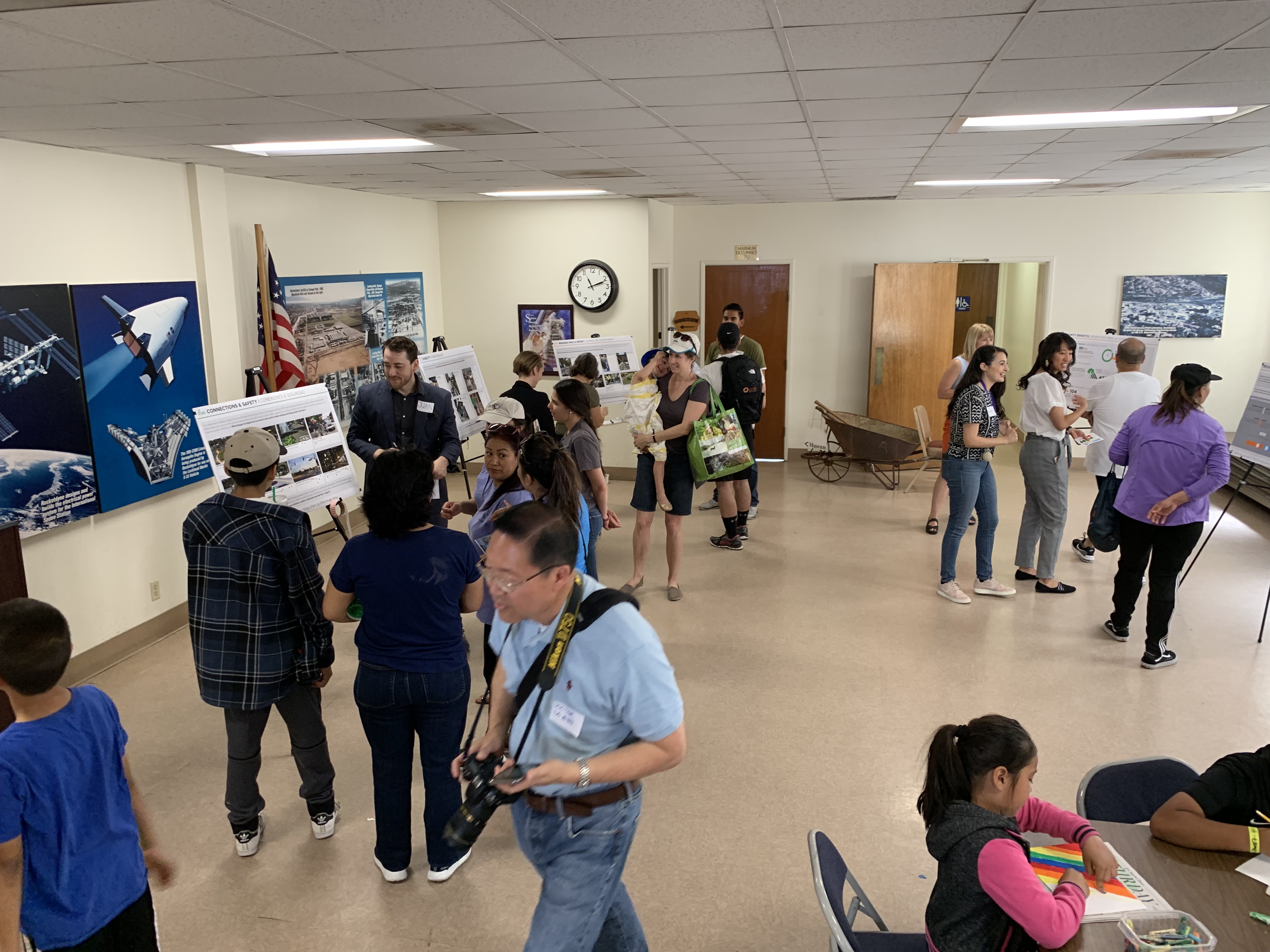 On April 13, Team Blumenfield co-hosted an open house with Climate Resolve to identify urban heat mitigation strategies along the Sherman Way Orange Line Station in Canoga Park. Fortunately, the City qualified for state grant money to reduce extreme heat along people’s walk or bike to transit and the community is hard at work with the City to design a strategy. 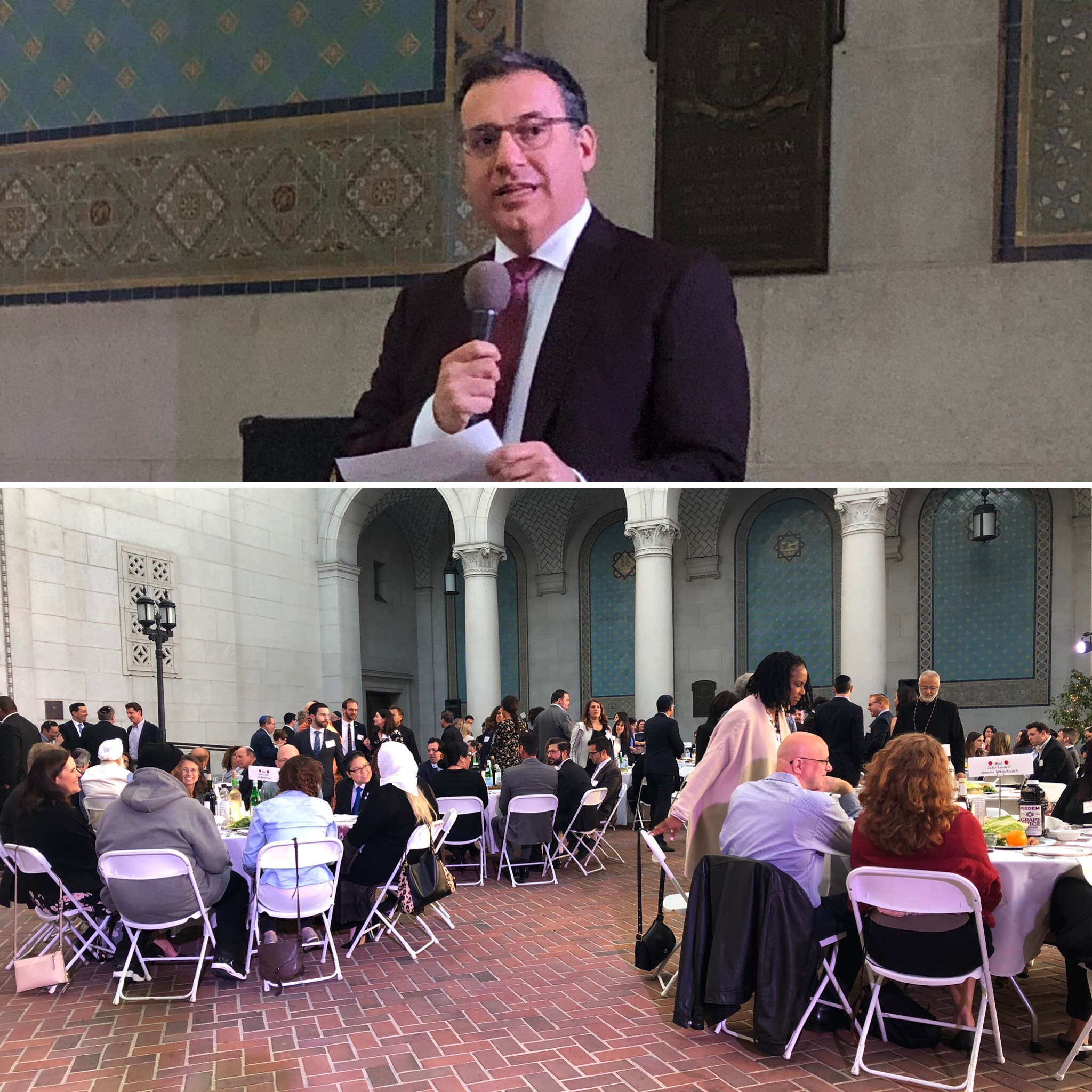 On April 17, Councilmember Blumenfield sponsored the interfaith Passover Seder alongside the LA Housing and Community Investment Department, the Jewish Federation of Greater Los Angeles, and the Human Relations Commission for the City of Los Angeles. 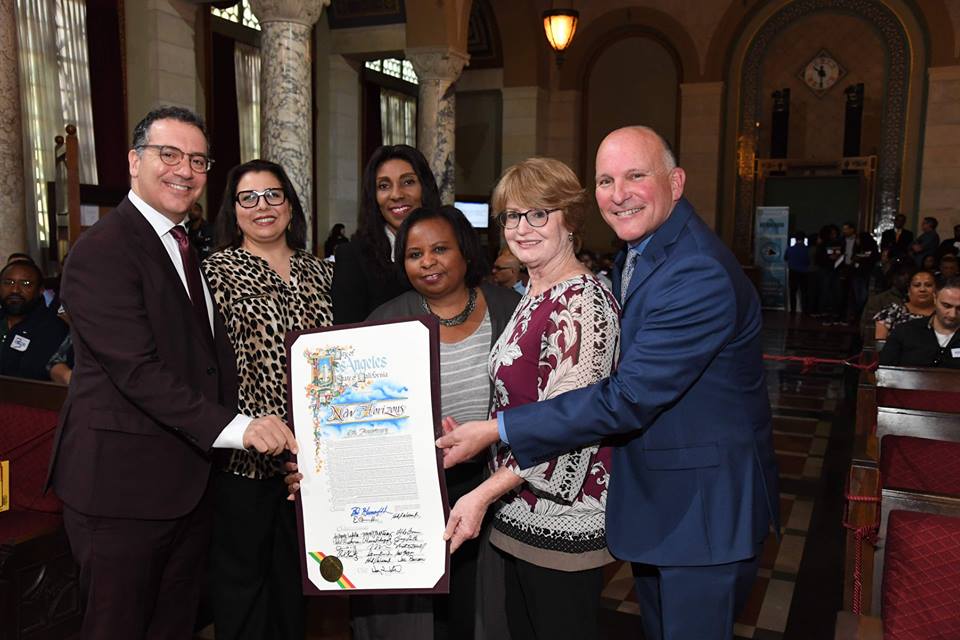 On April 17, Councilmember Blumenfield celebrated New Horizons on their 65th anniversary of serving persons with special needs. New Horizons was created in 1954 by concerned parents who wanted to establish more specialized services for their children in the Valley. Thanks to New Horizons, hundreds of clients are currently employed and living productive lives, greatly benefiting our City. Blumenfield has worked closely with this organization for many years whether it involved helping find employment or housing for their clients or helping minimize the impact of state budget cuts during the recession. 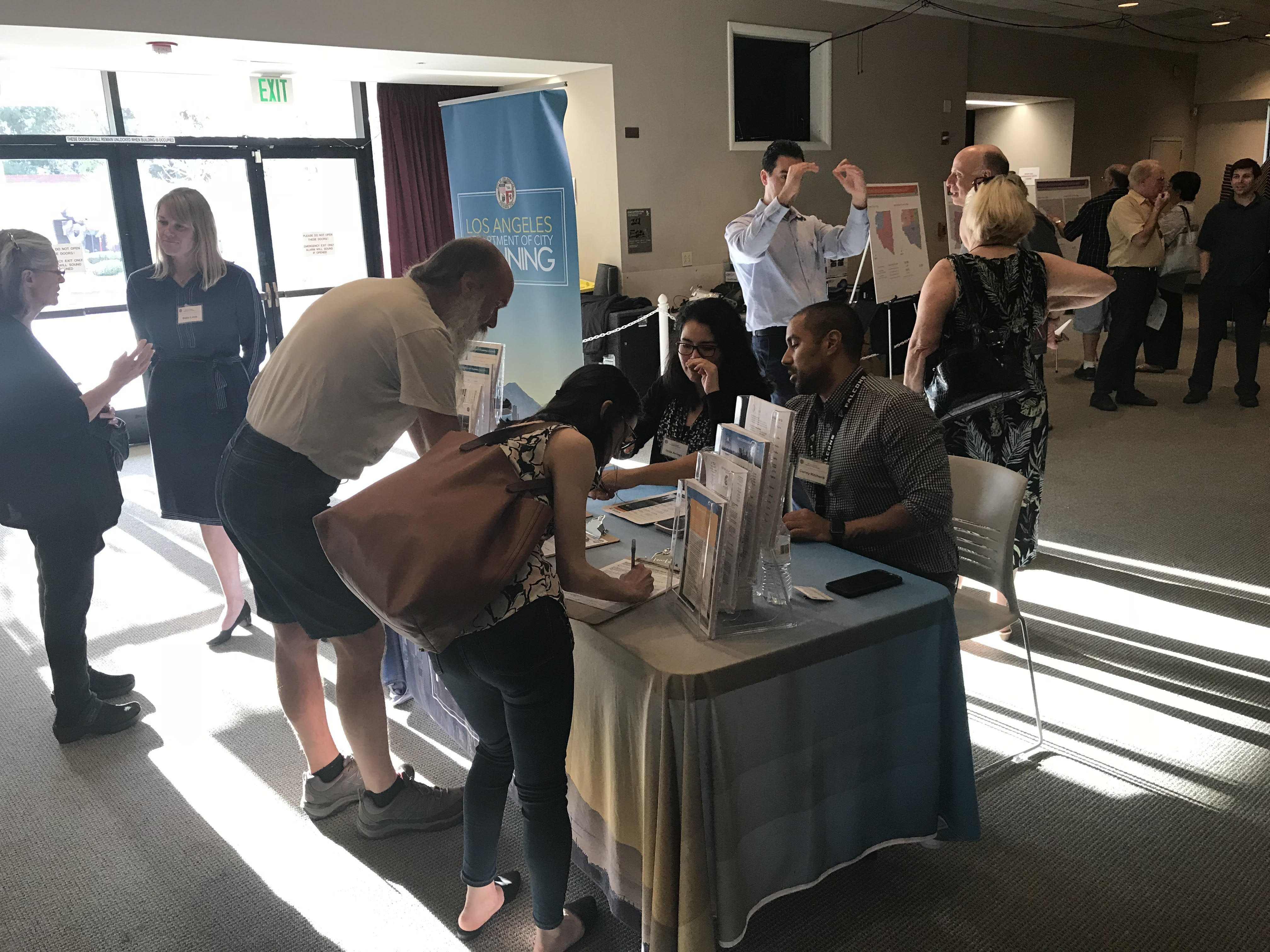 Team Blumenfield attended the Environmental Impact Report (EIR) Scoping Meetings for the Canoga Park - Winnetka - Woodland Hills - West Hills, Tarzana-Encino, and Reseda-West Van Nuys community plan updates. These meetings provided an opportunity for folks to express their concerns about potential impacts the updates may have. If anyone has questions about the EIR scoping meeting or the community plan update, please call Elizabeth Ene or Alison Pugash at 818-774-4330.