Since the Woolsey and Hill Fires broke out last week, we have not only seen incredible bravery from our first responders but also overwhelming generosity from our community. To meet a need and fill a void, I transformed my office into a temporary donation hub. Not only did constituents come out by the hundreds to donate goods and volunteer, I met people from Fullerton, Simi Valley, Montebello and all around the region who came by to help and make donations. My staff and I worked around the clock as we activated my Emergency Preparedness Community Action Team (BobCAT). The crises tested the BobCAT’s effectiveness and preparation. They passed with flying colors!

Last weekend my team took truck loads and truck loads of needed goods to the evacuation centers located in my district. Though the fire is 69% contained, we still do not know the full damage it will cause and must remain ready for the weeks and months of recovery ahead of us to deploy the donated supplies where they are needed.

Together with my staff, my BobCAT utilized most of the forward-deployed supplies that we had been storing in a nearby warehouse for emergencies. This allowed us to coordinate, sort and distribute the right supplies to the right evacuation centers within hours of learning of the need. Together we have collected over 100,000 pounds of emergency supplies, including pet foods, diapers, energy bars, and canned foods. The generosity of the West Valley and Greater Southern California has truly been incredible. The foresight of my team to have the warehouse ready to go was also inspiring.

There have been some amazing and touching examples of heroism and generosity, such as our volunteer Sandra. Sandra volunteered because she remembered the grief and anguish she had felt one year ago when she lost her house to a fire.

I am immensely proud of the community and honored to be your Councilmember. 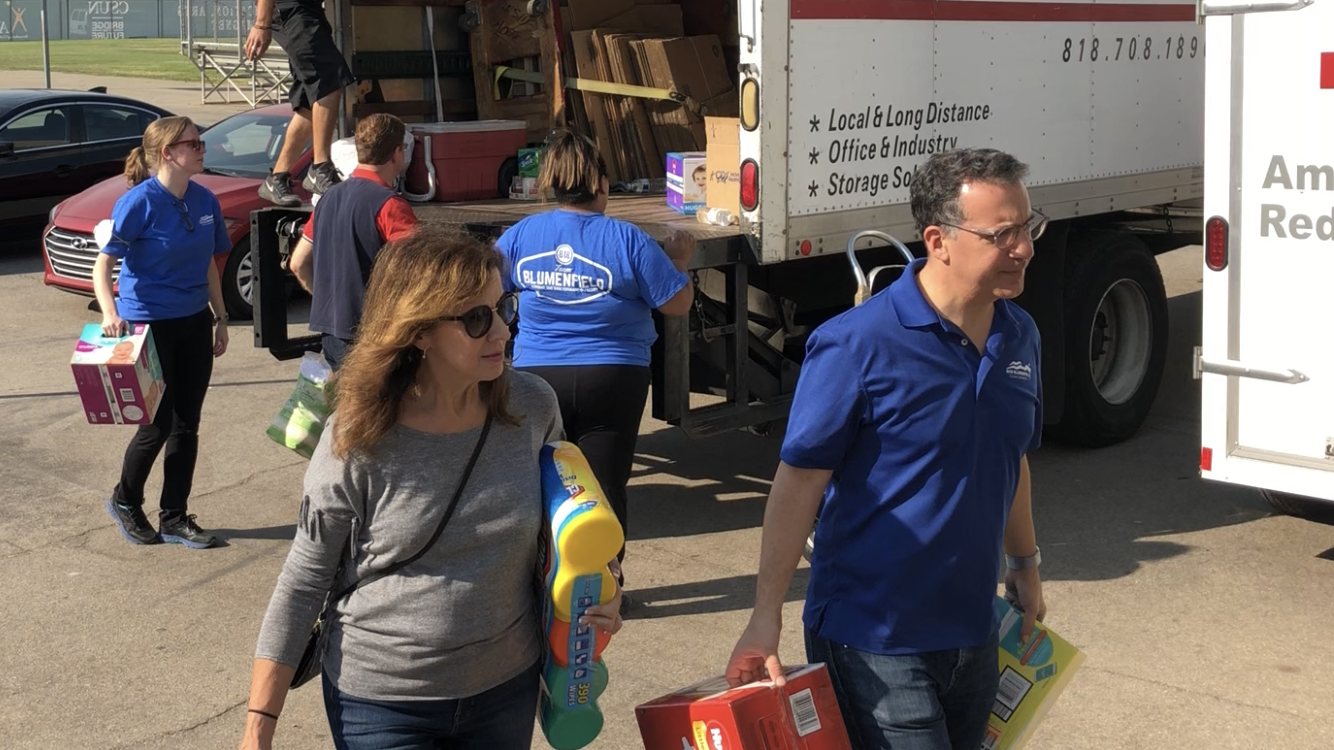 Blumenfield and his team dropping off donations at Canoga Park High School. 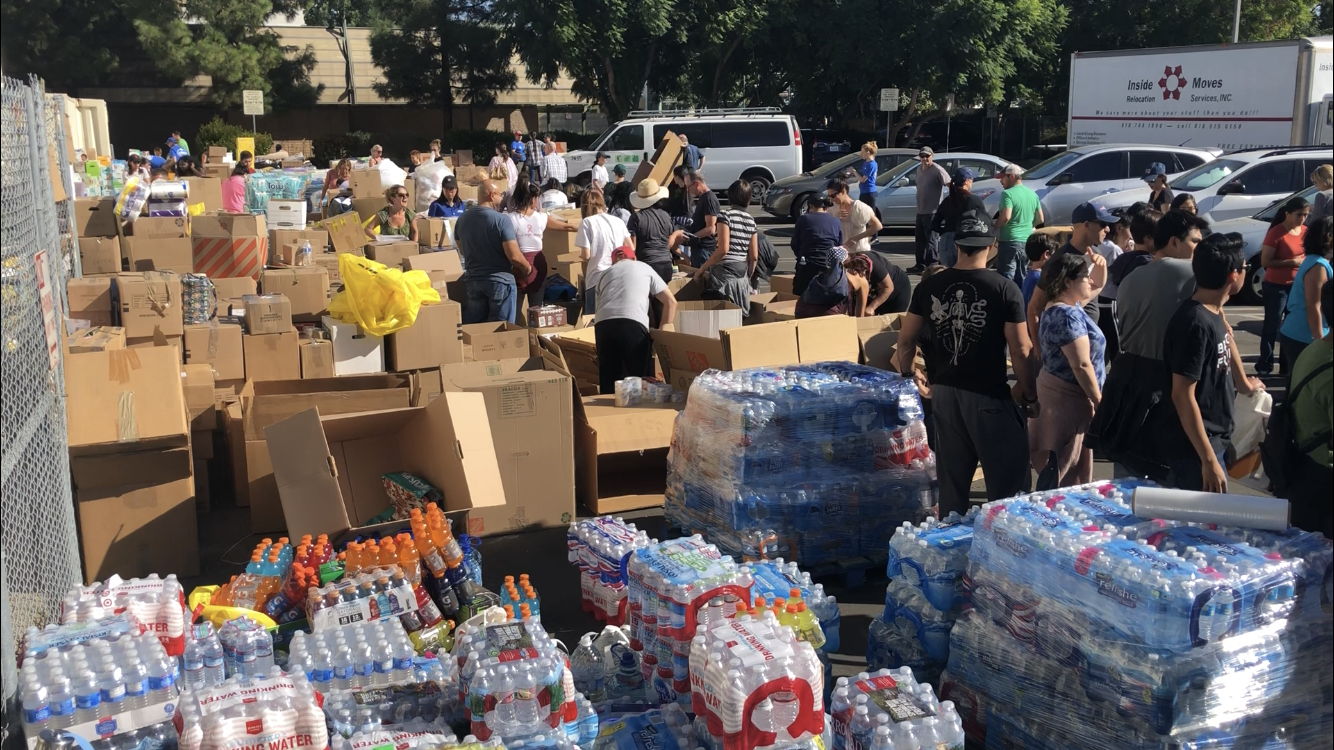 (More pictures in Around Town)

On November 5, Councilmember Blumenfield convened his Economic Development BobCAT (Community Action Team) to discuss how to further empower small businesses and offer resources to assist entrepreneurs in the West Valley.

“I want to make sure that our small business community knows we have their backs and want to partner with them to grow the West Valley economy together,” said Blumenfield.

The meeting featured a panel of local entrepreneurs who discussed key lessons they learned while creating their businesses and highlighted how they think local government can help business thrive.

He and his BobCAT team, headed by economic development deputy Kevin Tamaki, regularly visit local business owners throughout the West Valley to learn what services they need, hear their stories, and inform them about City assistance programs.

Blumenfield also hosted Vanessa Willis and Jackie Rodriguez from the Economic and Workforce Development Department to discuss available resources for business owners in the West Valley. They discussed low-cost small business loans, subsidized services from LADWP such as free lighting repairs and water conservation services, as well as many other resources to benefit local businesses.

Vanessa Willis said, “We want you to know we are here to service you and guarantee your success.”

“Our job here is to take the confusion out out of doing business in the City and link you with the resources and partnerships to see all your businesses grow,” Blumenfield said. 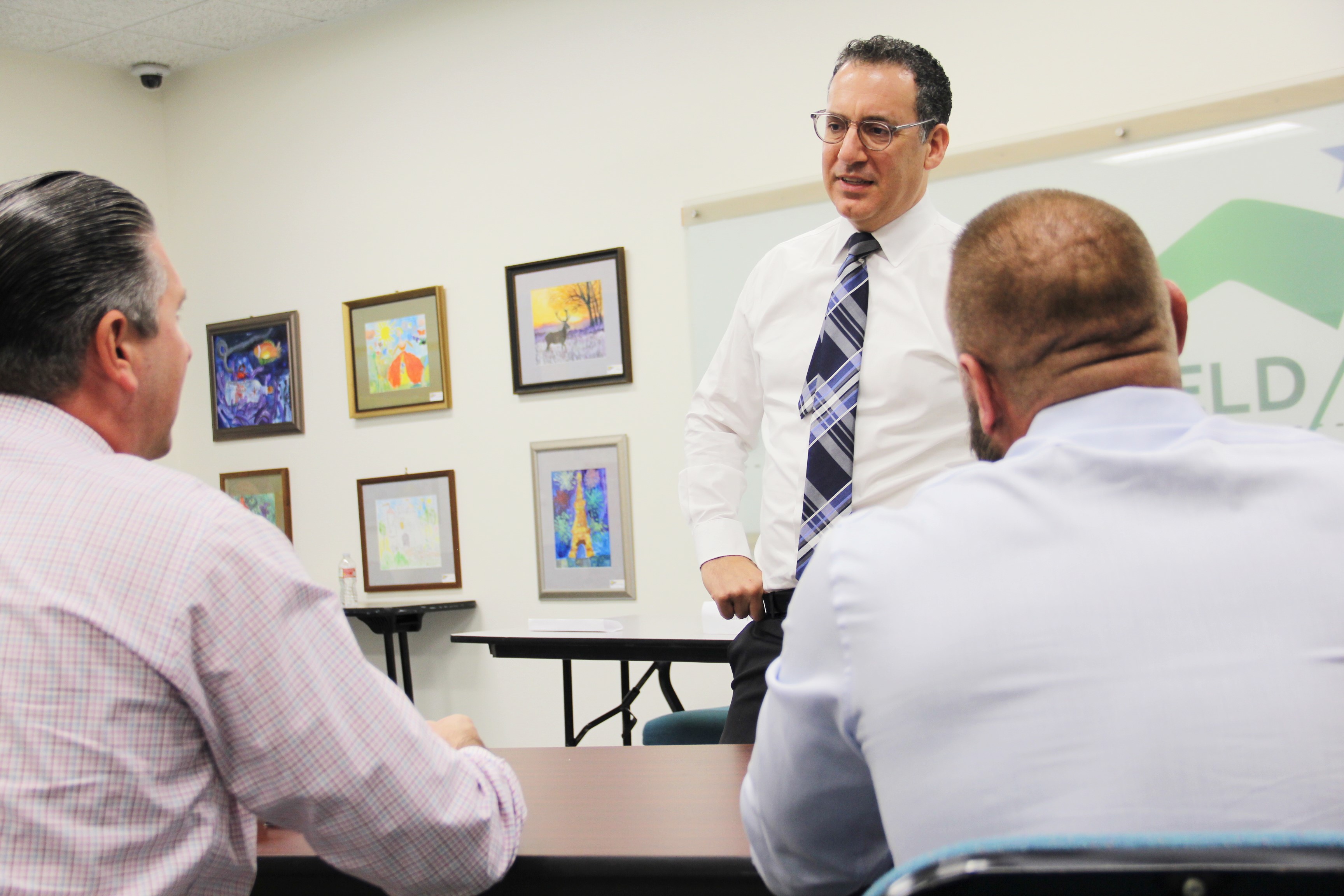 “These homesharing services provide a great service to Angelenos by allowing them to make extra income, and in some cases, giving folks a financial lifeline that keeps them in their home,” Blumenfield said. “But this industry continues to be illegal in Los Angeles and I want to ensure we get laws on the books that are enforceable, balanced, and make sense.”

An important part of these regulations for Blumenfield is preserving and growing the affordable housing stock throughout Los Angeles including Rent Stabilized Ordinance (RSO) units.

“We need to guarantee these companies are not renting out and diminishing our supply of rent-controlled housing units,” Blumenfield said. “That is why I am standing strong to prohibit our RSO from bring improperly used as STR.”

Blumenfield insisted on these measures to prevent the loss of needed affordable housing, protect neighborhoods, and ensure public safety. Though this issue is worthy of more study in the future, he believes opportunities for mischief are too great to allow RSO units to be rented by tourist-oriented platforms.

STR regulations still need to be heard in an upcoming City Council meeting, but Blumenfield is confident that Los Angeles will finally have comprehensive regulations that will bring this industry out of the shadows and into sensible regulations. 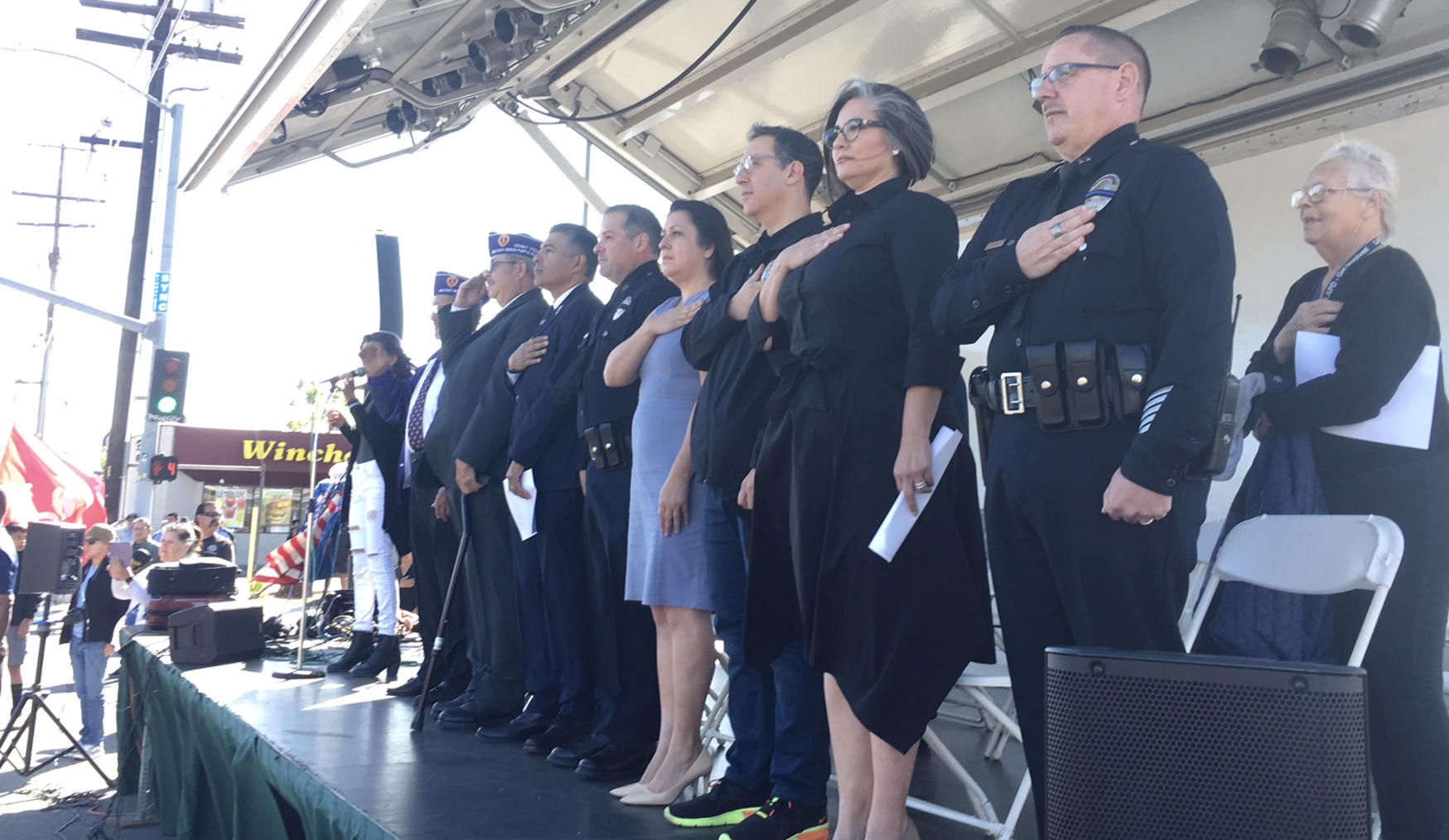 On November 11, Councilmember Blumenfield joined local veterans for the 15th annual San Fernando Valley Veterans Day Parade. He said, “On Veterans Day, let's honor the brave men and women who have risked everything to keep us safe and protect our nation. We owe you an immeasurable debt of gratitude.”

When he worked for Congressman Howard Berman, Blumenfield helped launch this annual tradition along with Fred Flores and other community leaders. It has become one of the City's largest Veterans Day events and a staple in Valley communities and he has been part of it every year. 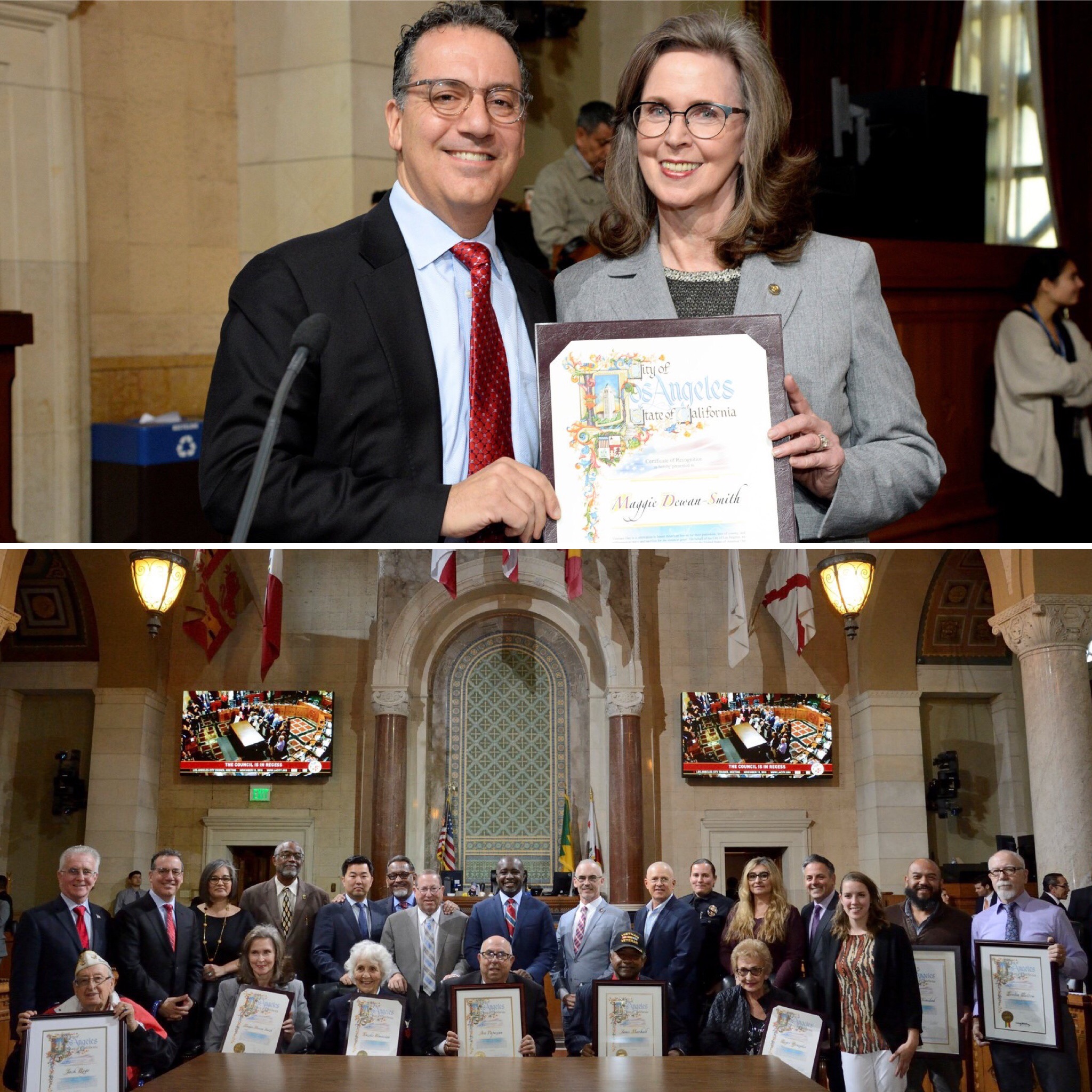 On November 13, Councilmember Blumenfield recognized Lieutenant Colonel Maggie Dewan-Smith as the West Valley’s honoree for the City Council’s Veterans Day Celebration. Lieutenant Colonel Dewan-Smith has served our country for more than 27 years in the Air Force Reserve and has saved many lives as a Chief Flight Nurse. While assigned to the Air Force Surgeon General’s Office, she helped create the Nurse Enlisted Commissioning Program (NECP) to help offset the cost of Nursing School for aspiring students in the military. Lieutenant Colonel Dewan-Smith has also made significant contributions to the City of Los Angeles, where she has worked as a lecturer in the Acute Care Nurse Practitioner Master’s Program at UCLA while also working in both inpatient and outpatient Cardiodiagnostics.

After her service, Maggie went back to pursue her first passion, acting. Now a working actress, Maggie has been seen in film, television, and theater and was featured on Turner Classic Movies as part of Veterans Day Weekend programing.

A longtime Woodland Hills resident, Blumenfield coincidentally met Maggie a few days ago after she had been evacuated to Pierce College as he was helping with Woolsey Fire relief efforts. 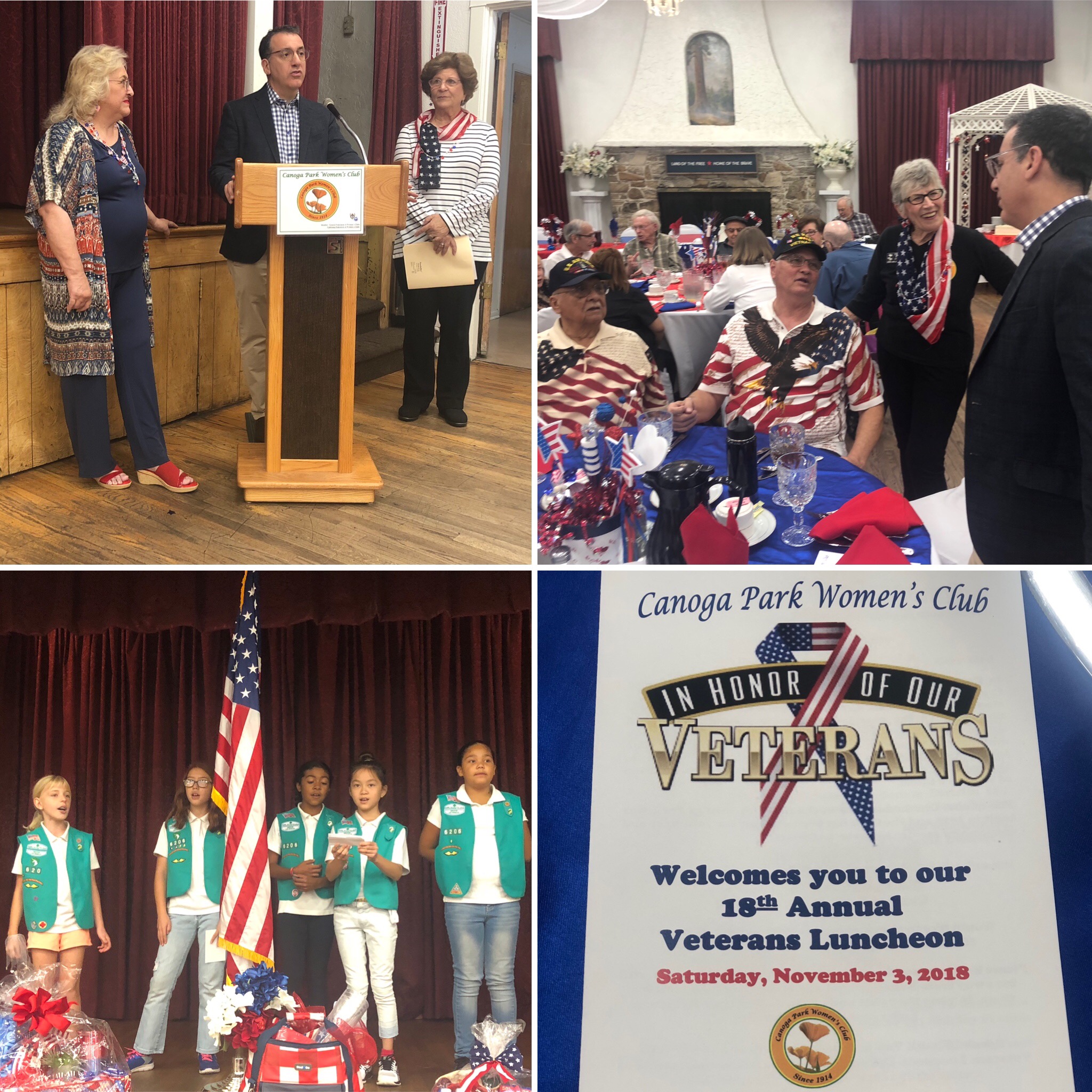 On November 3, Councilmember Blumenfield joined the Canoga Park Women’s Club to honor West Valley veterans. This organization has been hosting this special luncheon for the past 18 years and Blumenfield has regularly joined their events.

Blumenfield said, “I am delighted we could all come together again today to honor our nation’s veterans. We must never forget the sacrifices many of them made and continue to make and advocate that they receive the resources they deserve to lead meaningful lives.” 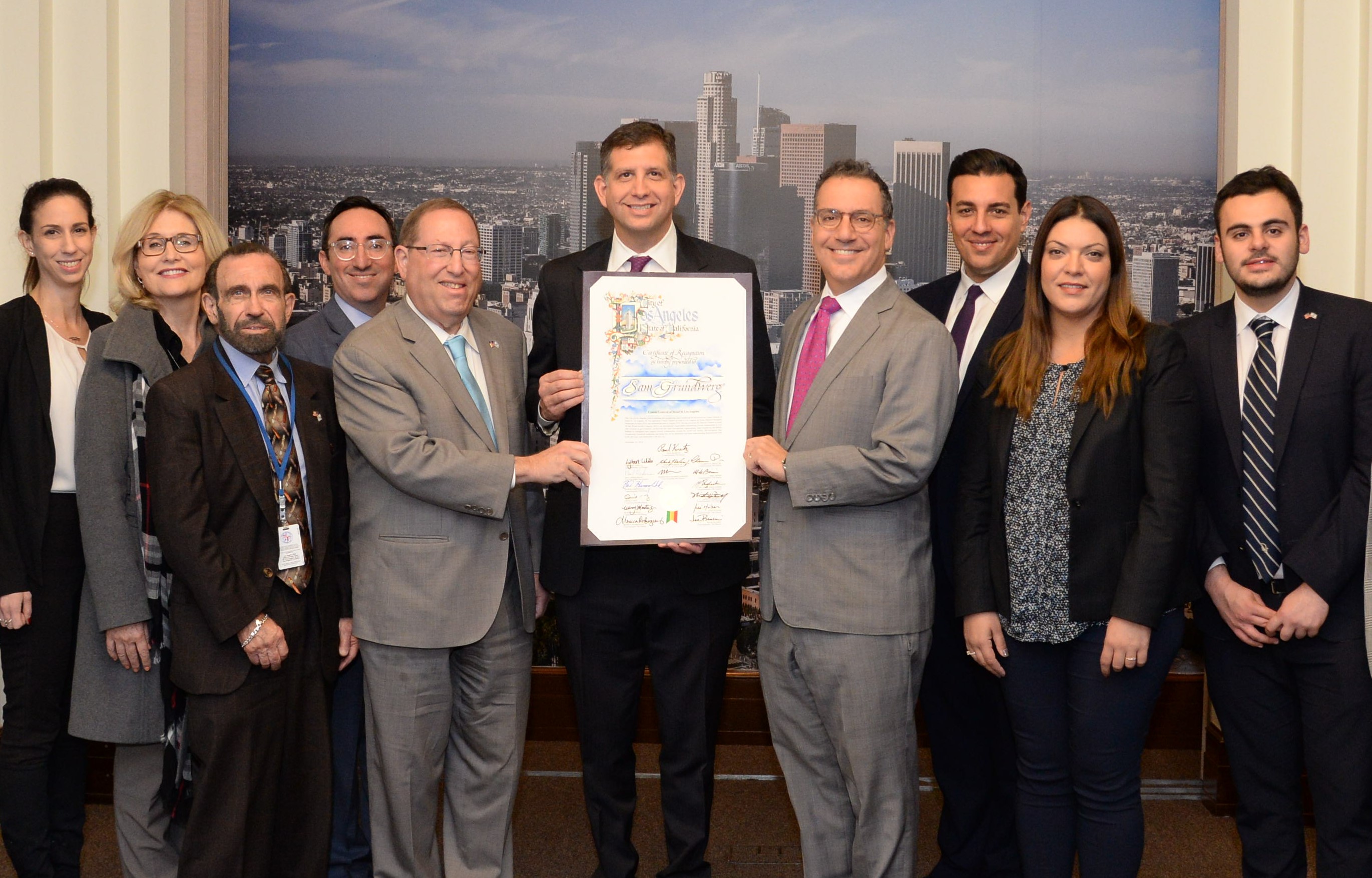 On November 14, Councilmember Blumenfield helped lead a special City Hall celebration for Sam Grundwerg, the outgoing Consul General of Israel in Los Angeles. “Our teams have collaborated on many policy and community initiatives, such as water conservation efforts on the LA-Israel Task Force,” said Blumenfield.  “Not only is he an accomplished diplomat, he is also an incredible husband and father of three children. He made a great mark on Los Angeles and his leadership and friendship will be missed.”

Grundwerg was appointed to the position in August, 2016, and previously served as Director General in Israel for the World Jewish Congress (WJC) as well as an international lawyer in the US. 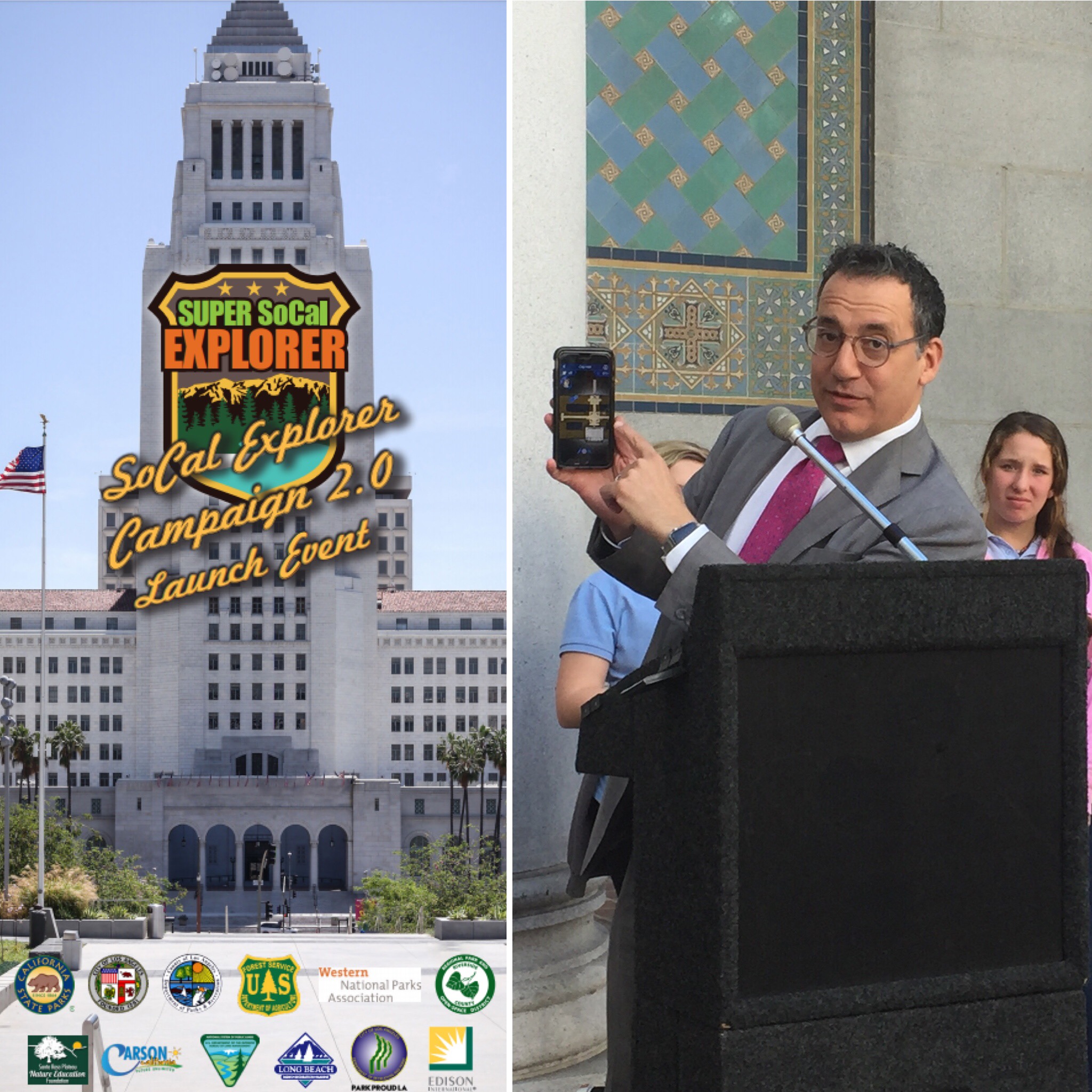 On November 14, Councilmember Blumenfield attended a kickoff event to celebrate the mobile kids game SoCal Explorer 2.0 Campaign, which utilizes mobile augmented reality gaming to get kids outside and to learn about nature and their local park ecosystems.

SoCal Explorer 2.0 Campaign is an initiative with 11 partners who have all joined together to get more kids outside, active and learning about Southern California. Kids have the opportunity to explore 29 different parks across Southern California and complete site-specific missions to learn about local ecosystems.

“My kids love to use phones for everything—and why not use that screen time as a way to teach them about the environment and to get them outside?” said Blumenfield. “This is a fun app that encourages kids to explore and go on adventures and I couldn’t be happier to support it.”

In addition to Reseda Park, some participating parks include Hansen Damn Recreation Area, and MacArthur Park. The new version of the SoCal Explorer app launched November 14 and features new parks for kids to explore and brand new embroidered badges players can earn through gameplay.

Introducing Walk of Hearts to the National League of Cities 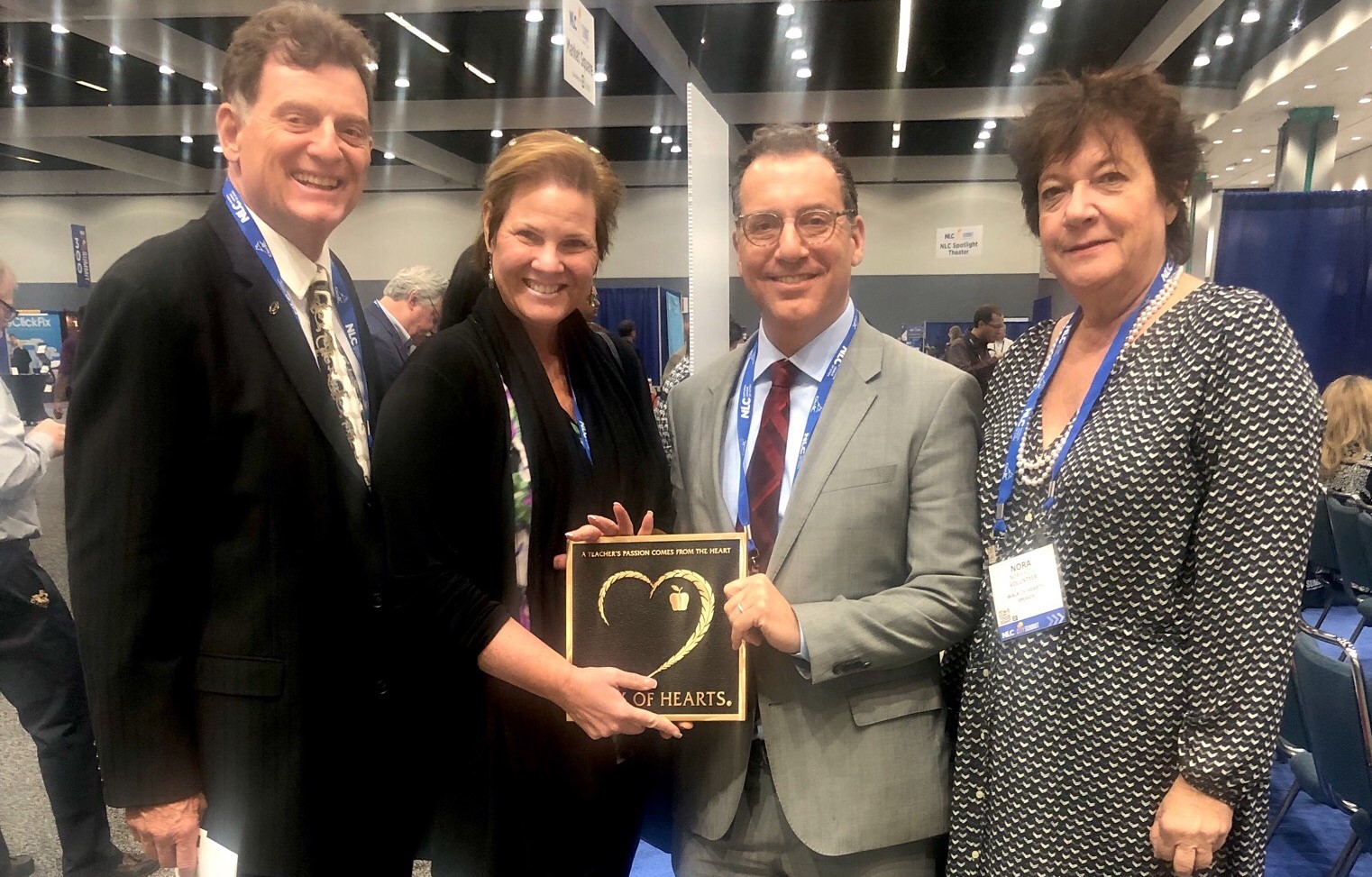 Councilmember Blumenfield is a huge fan of Walk of Hearts, a wonderful tribute to local teachers which has become an institution in the West Valley. Consequently, he made special arrangements to have the organization featured along with its creators Joe and Katie Andrews at this year’s National League of Cities Conference (NLC).

“I knew that Joe, Katie and the Walk of Hearts team wanted to expand their program nationally and I though this conference would be a perfect venue to help them make that happen,” said Blumenfield.

The NLC took place from November 7-10 at the Los Angeles Convention Center. More than 3800 mayors, councilmembers and other delegates attended the NLC summit to learn, collaborate and foster new ways to make cities across the US better for their constituents. The Walk of Hearts team made a presentation about the program and connected with local officials around the country.

“Teachers are the unsung heroes changing our children’s lives everyday,” Blumenfield said. “By placing plaques on the sidewalks, we are giving the street character and bringing together our community. If other Cities can do the same, we will all be better off.” 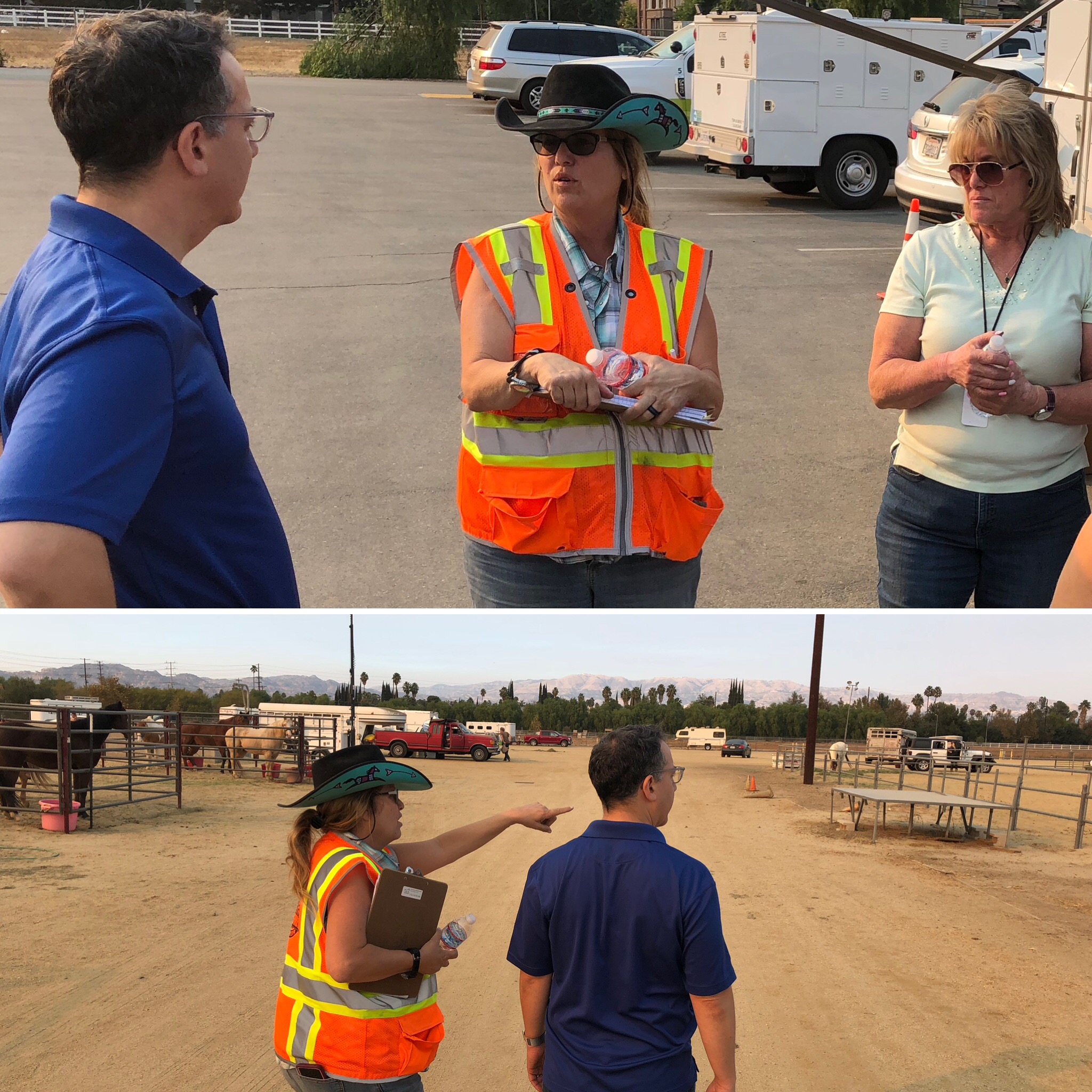 Blumenfield with Megan Silveira, a volunteer Shelter Manager for County of Los Angeles Department of Animal Care and Control Equine Response Team and Jill Haber, a member of the City of LA Equine Advisory Committee.

Together with the help of other selfless volunteers, they ran the temporary shelter for horses 24/7 at Pierce College since Thursday. Their passion and resilience is truly amazing. 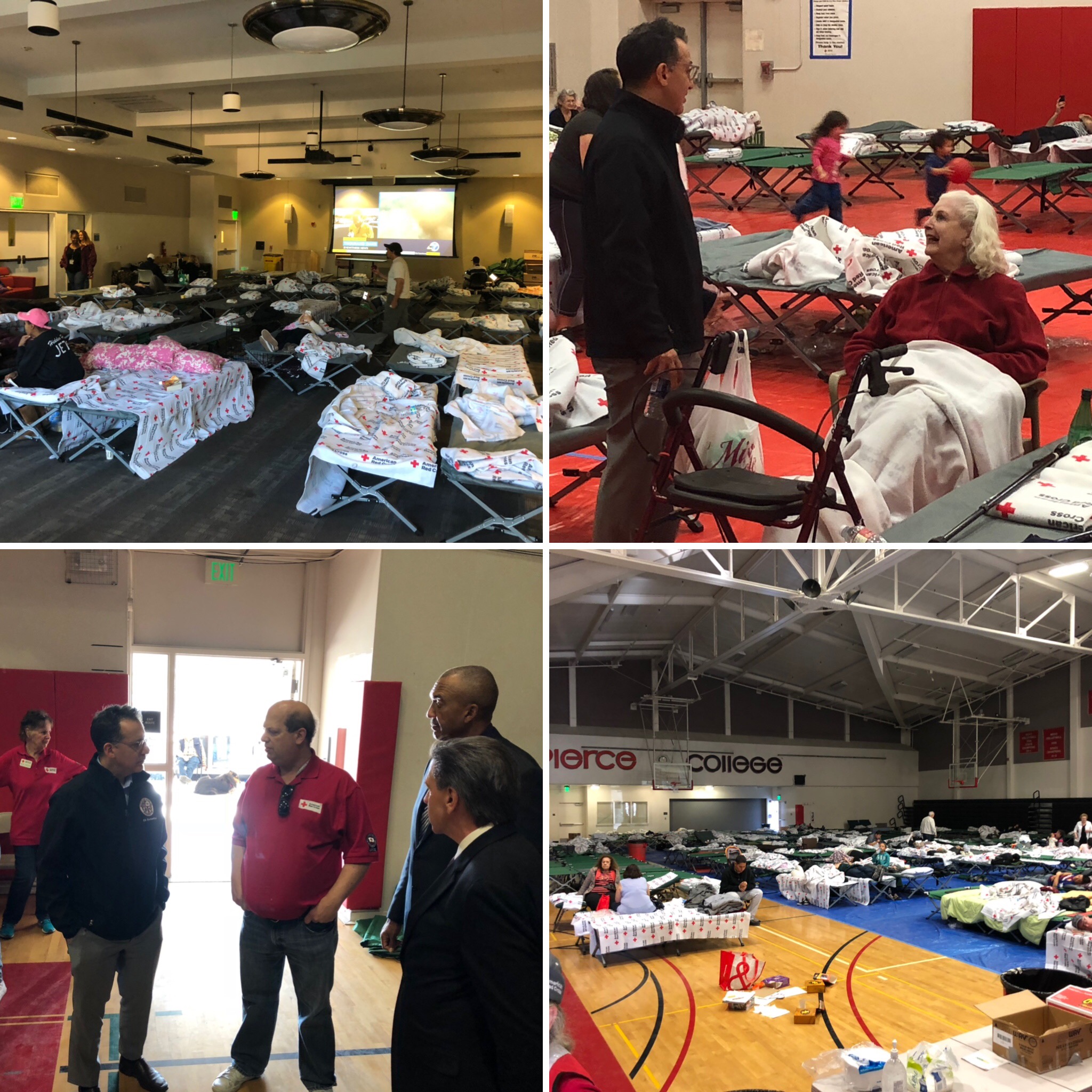 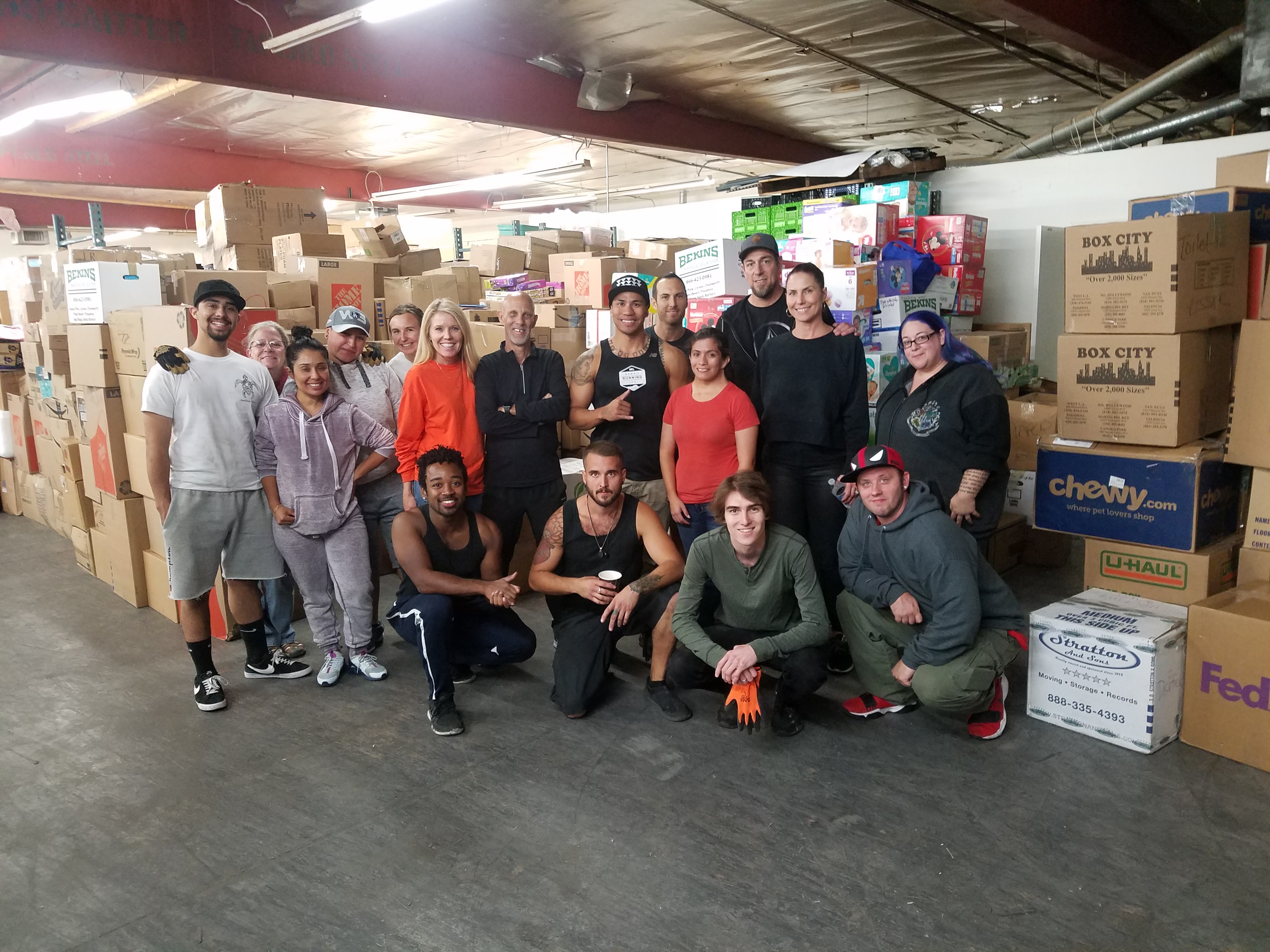 Team Blumenfield volunteers at the BobCAT's emergency warehouse dropping off the final load from Sunday night. 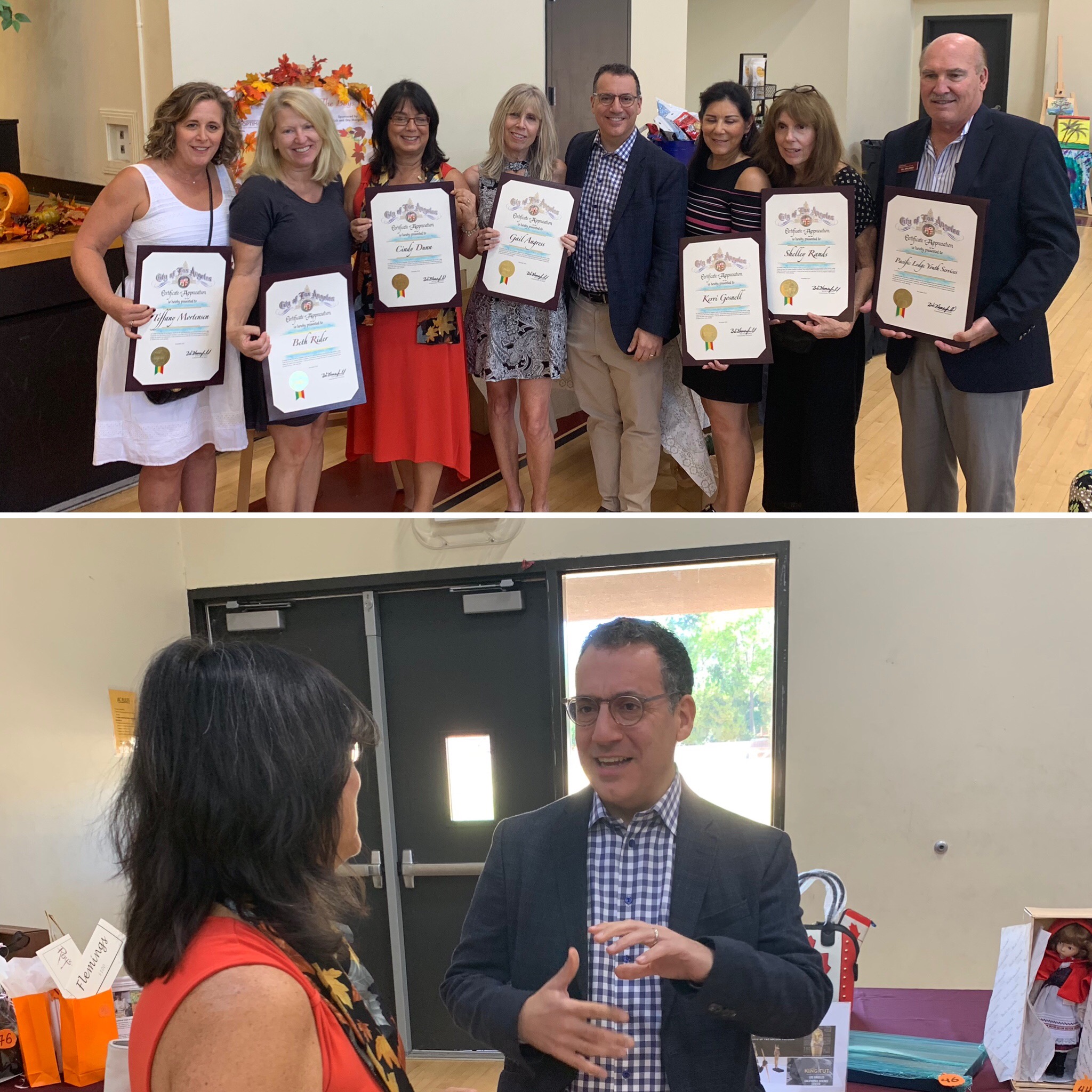 Recently Pacific Lodge Youth Services merged with Optimist Youth Homes and Family Services to expand their outreach and programmatic capabilities. Both organizations have been around since the early 1900s and are an integral part of our community. 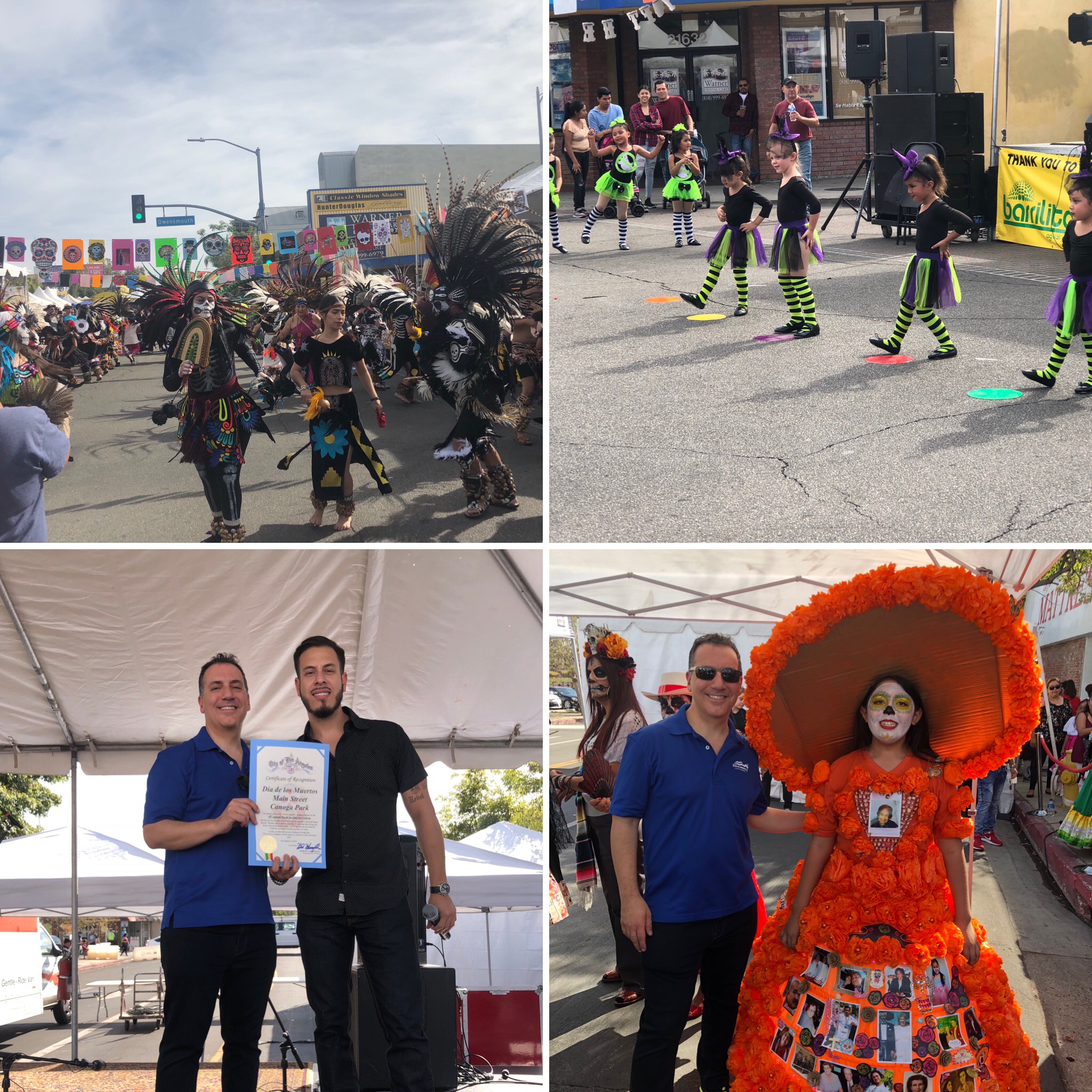 On November 4, Councilmember Blumenfield participated in Canoga Park’s 18th Annual Dia de Los Muertos festival. Many residents in our community celebrate Dia de los Muertos (The Day of the Dead) to honor the souls of the dead who return to visit their surviving families.

Blumenfield thanked community organizers from Canoga Park-West Hills Chamber, the Los Angeles Department of Cultural Affairs, the Canoga Improvement Association and many other individuals for their hard work putting together the festival. He is always a partner to this event and his staff helps provide services and funding. 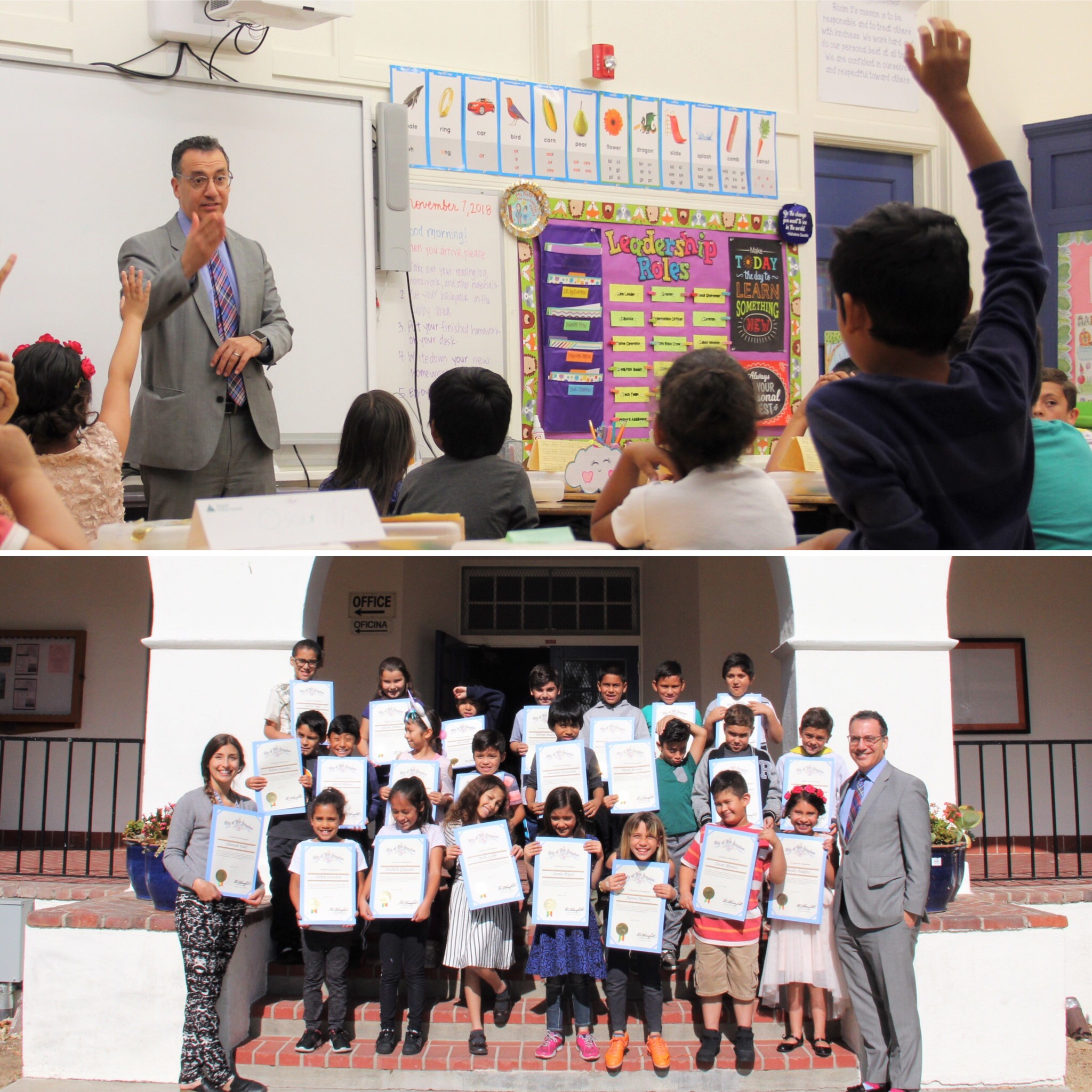 On November 7, Councilmember Blumenfield visited a third grade classroom after receiving several letters from students concerning particular issues they deeply cared about. Third graders from Reseda Elementary School were delighted to learn Councilmember Blumenfield read their letters and wanted to make an appearance to answer their questions and learn how they can get involved in government.

Blumenfield discussed the importance of working hard to accomplish your dreams and how anyone can contribute to make the West Valley better. Councilmember Blumenfield presented certificates from the City of Los Angeles to the class at Reseda Elementary School, trained them to use the MyLA311 app, and gave them all the title of Junior Deputies. 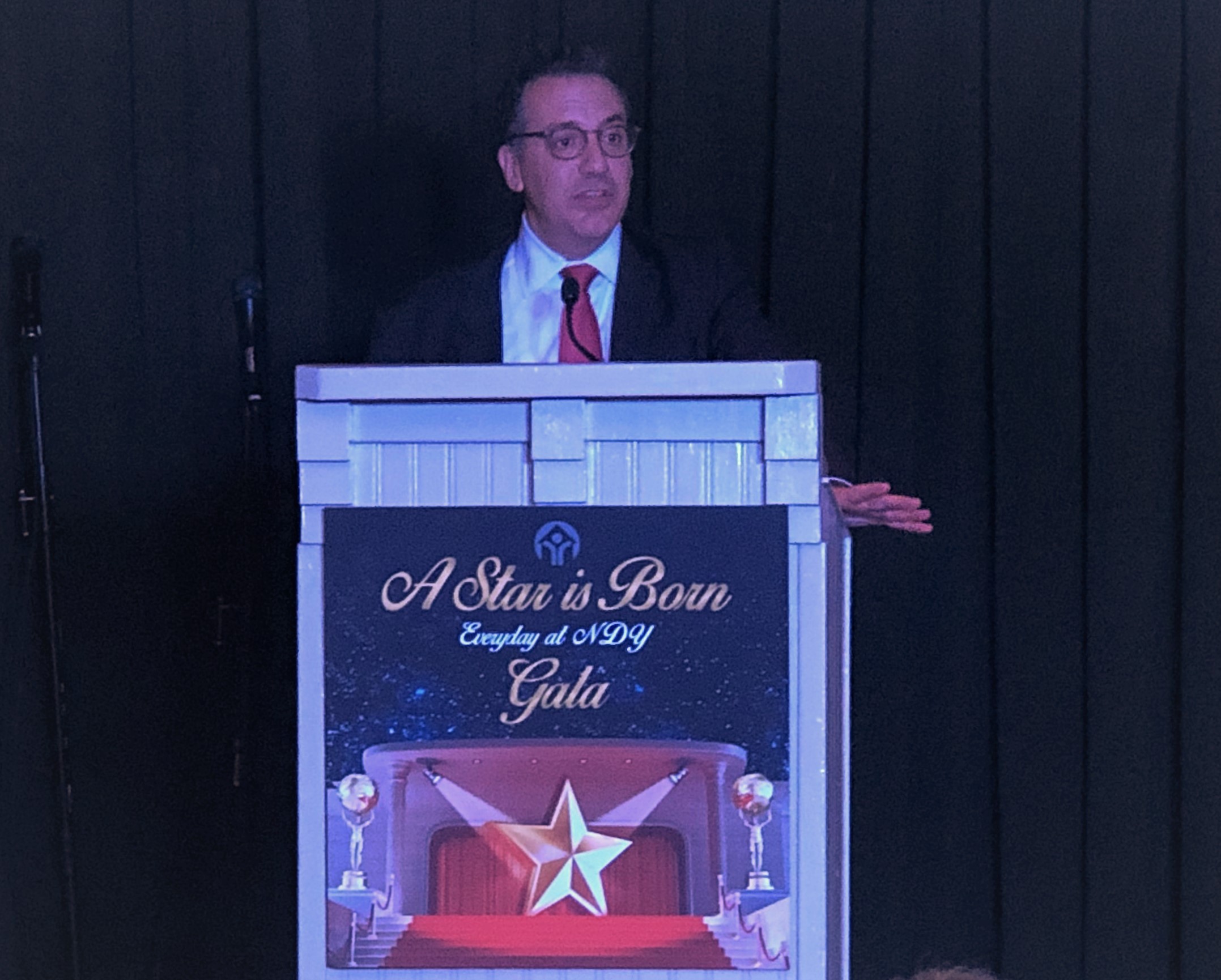 The NDY Gala honored many heroes who work to make the lives of youth safer and is a vital part of the West Valley Community. NDY serves at-risk youth in Canoga Park by providing gang prevention services.