A New Budget for Los Angeles 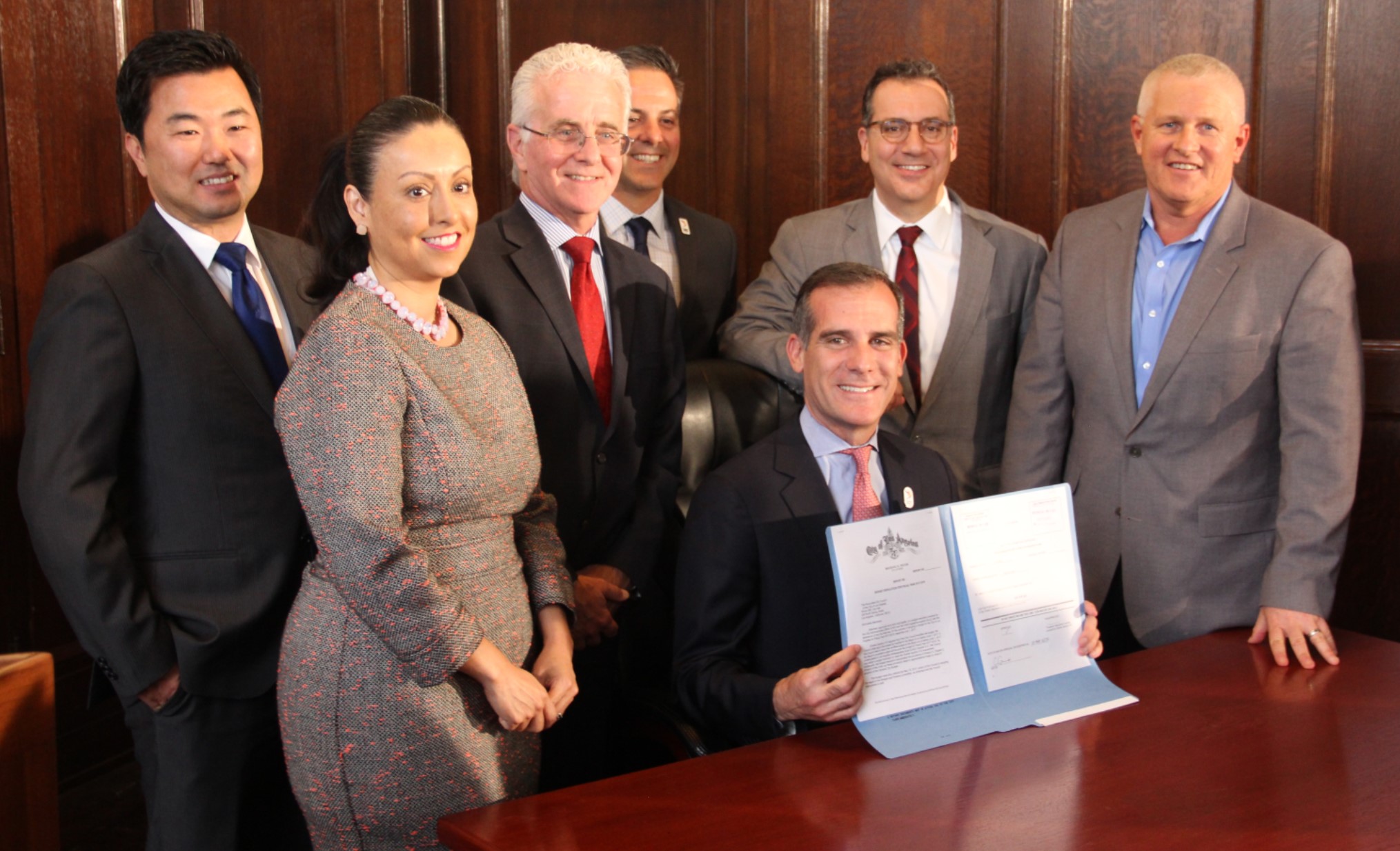 For the last month, Councilmember Blumenfield and the Budget & Finance Committee tirelessly reviewed Mayor Garcetti’s 2017-2018 budget proposal and passed a final budget. Officials from each City department came before the committee and answered specific questions about their finances and operations. The $9.2 billion proposal contains critical programs and initiatives that will target important services and needs throughout Los Angeles.

“A budget at its heart is a statement of priorities,” said Blumenfield. “I am proud that this budget offers unprecedented funding to address homelessness, fix city streets, and support law enforcement.”

Every year Blumenfield requests that his constituents complete his annual community budget survey and every year the number one concern is funding for public safety. This year the Council has increased LAPD’s budget to $1.57 billion, a $100 million increase from last year. This includes $21.6 million to continue the sworn hiring plan to maintain a force of 10,000 officers, funding for a new police commander for homelessness, and $8.7 million for body camera implementation. LAFD’s updated budget will be $633 million, a $24 million increase from the previous year. This offers $10 million for 200 new fire fighters (a net gain of 75 after attrition), $600 thousand for body armor replacement, and $1 million for a new fire station alerting system that will replace and obsolete communications networks.

Blumenfield fought hard the needs of the West Valley. In addition to the infographic below, Blumenfield secured funding for an on-site manager and program coordinator for Madrid Theatre in Canoga Park, $124,000 for San Miguel Street berm replacement, and $200,000 for a parking study along Sherman Way in Reseda and Canoga Park. 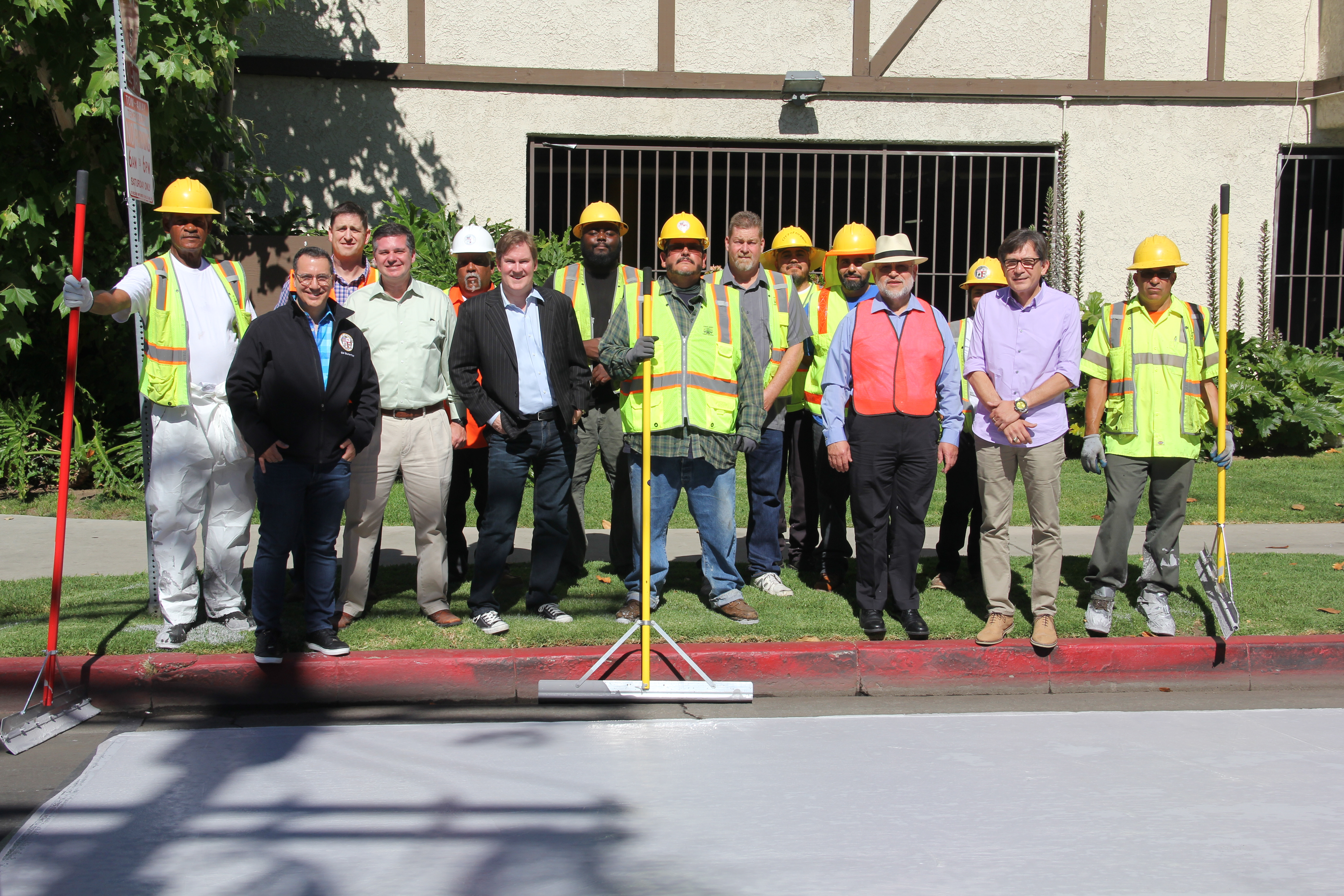 On May 20, Councilmember Blumenfield launched a new innovative program called ‘Cool Pavement,’ coating streets to seal asphalt surfaces and lower surface temperatures through increased solar reflectivity. Joined by Kevin James, President of the Board of Public Works; Nazario Sauceda, Director of the Bureau of Street Services (BSS); Greg Spotts, Assistant Director of BSS; and Jeff Luzar, National Sales Director of GuardTop LLC, this was the first Cool Pavement treatment on a public street in the State of California. The pilot project begins at the intersection of Jordan and Hart streets in Canoga Park.

“The West Valley is the hottest area of Los Angeles and we need to do everything we can to reduce the heat island effect,” said Blumenfield. “While we can’t change the weather, we can fight the ‘heat island effect’ and actually help bring the temperature in our neighborhoods down.”

BSS collaborated with Guard Top, developer of asphalt coating products, and have been testing this refective material in parking lots around Los Angeles. The day following the launch, Greg Spotts from BSS reported that the street was already 10 degrees cooler than before the treatment. One news report found an even greater temperature difference.

Over the next year, this pilot program will expand throughout the City for further performance tests. 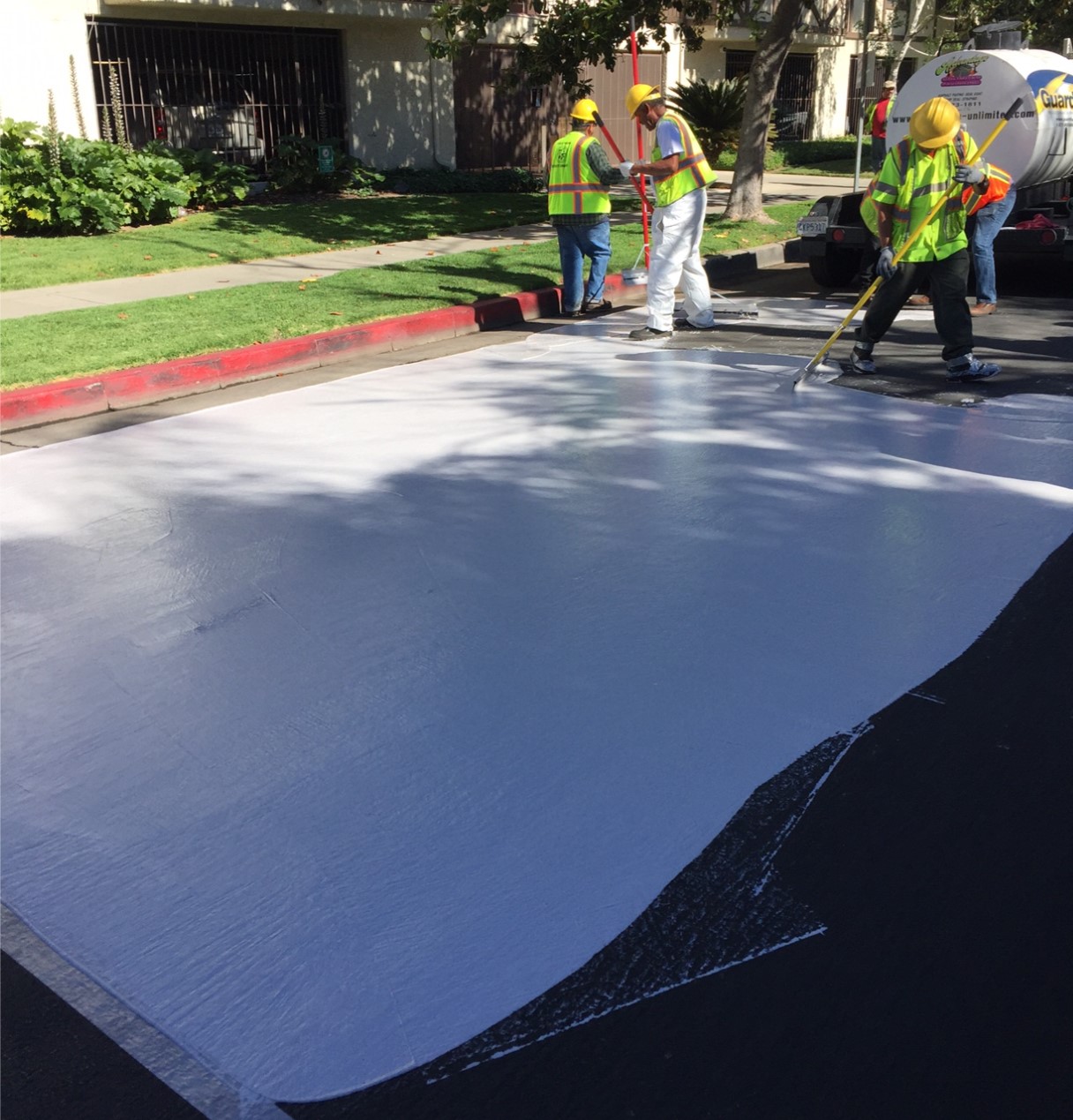 On May 22, Councilmember Bob Blumenfield joined State Senator Ben Allen and Councilmember Paul Koretz to rally support for SB 705, a statewide ban of polystyrene food containers. Polystyrene is a type of styrofoam that is not effectively recycled, extremely dangerous for marine life and is commonly used for takeout food containers. Senator Allen introduced the legislation and co-authored it with Senators Jerry Hill and Henry Stern.

“Now more than ever, we in Los Angeles and in California must stand up and fight to protect our environment and ensure that future generations enjoy clean mountains and beaches,” said Blumenfield. “It is our duty to protect our environment regardless of what is happening in Washington D.C. With people like Scott Pruitt running the EPA, reversing decades of environmental progress, it is up to us to make sure that California’s beauty is protected.”

Heal the Bay reports that Californians produce 3.32 billion pounds of polystyrene waste each year. Additionally, they stated that they have cleaned over 500,000 pieces of Styrofoam waste in Los Angeles County beaches over the last 10 years. Over 100 municipalities throughout California have limited the use of polystyrene and this bill, if passed, would be a big step in curbing Styrofoam use. Styrofoam does not biodegrade, it merely breaks up into small pieces that pollute the environment and leach dangerous chemicals. 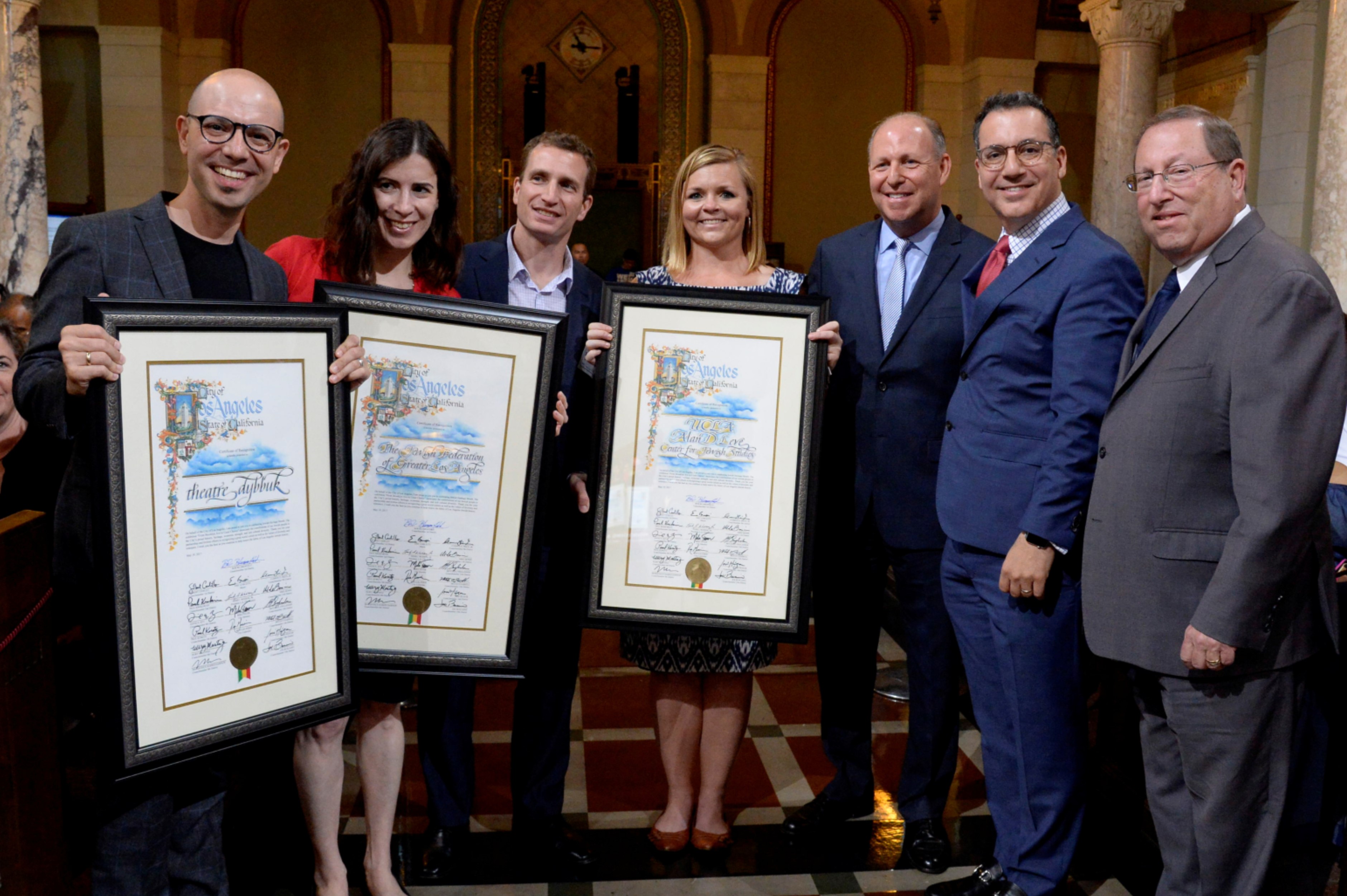 “The history of Los Angeles in inextricably linked to Jewish heritage,” said Blumenfield. “Jews have helped shape this City from its politics to its culture and that’s a relationship worth celebrating.”

The chamber was treated to a performance from theater dybbuk’s original play exagoge and, after the event, guests enjoyed an exhibit in the City Hall rotunda titled Brooklyn Ave. to Cesar Chavez: Jewish Histories in Multiethnic Boyle Heights presented by UCLA Alan D. Leve Center for Jewish Studies.

On May 5, the City Council unanimously voted for Councilmember Blumenfield’s resolution to push Congress to investigate whether President Donald J. Trump has violated the Foreign Emoluments Clause of the United States Constitution or committed any other high crime or misdemeanor sufficient to warrant commencement of impeachment proceedings.

“This resolution is about ensuring that every decision President Trump makes is based solely on the good of the American people, not the personal wealth of himself and his family,” said Blumenfield. “In his current proposed federal budget, Californians and Angelenos are set to lose millions in funds that help our most vulnerable and I don’t think it’s too much to ask our President to reassure his constituents that he is putting our interests in front of foreign investors.” On May 5, the City Council unanimously voted for Councilmember Blumenfield’s resolution to push Congress to investigate whether President Donald J. Trump has violated the Foreign Emoluments Clause of the United States Constitution or committed any other high crime or misdemeanor sufficient to warrant commencement of impeachment proceedings.

The Emoulments clause of the U.S. Constitution is found in Article 1-Section 9-Clause 8. Constitutional scholars are raising many issues with the President’s actions that may violate this clause in the constitution.

Two examples that Blumenfield used to help highlight potential conflicts of interest were the President’s relationship with Rodrigo Duterte, President of the Philippines; and recent patents given to Ivanka Trump’s company in China.

Blumenfield was joined by members of the West Valley Resistance, a local organization demanding accountability from President Trump. They asked Blumenfield to put forward the resolution.

A link to Blumenfield’s full remarks can be found here beginning a minute 47:00. 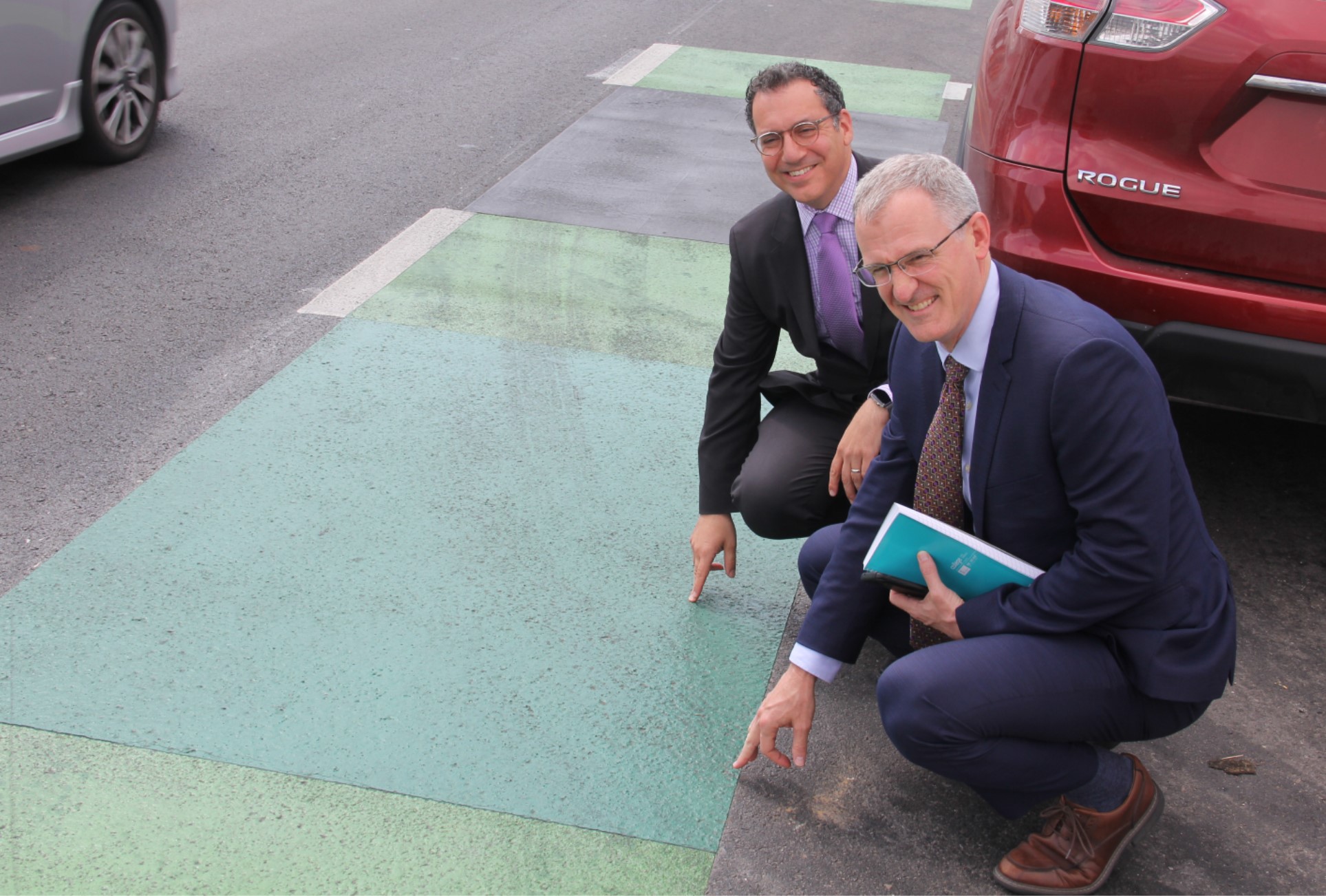 Councilmember Blumenfield works hard to find creative ways to make Los Angeles the most film friendly City in the world because the entertainment industry generates thousands of jobs and millions for the local economy. But one issue that has persisted concerns the green pavement markings used for bike lanes which can create problems for filming because the color is too close to the shade used for “green screens.” The issue is complicated because using the wrong green can make a previously desirable street for filming undesirable, sending jobs to other cities and countries. At the same time, high visibility bike lanes are very helpful to improve safety for cyclists and prevent collisions and federal regulations limit the shades of green that can be used on biked lanes. It is also difficult because bike lane colors involve many more variables than regular paint, including luminosity.

Because Blumenfield believed that there must be a compromise color, he didn’t accept the impasse that had developed between the film industry and the City on what constitutes an acceptable green colored bike lane. Starting with a motion he introduced, Blumenfield’s team has been meeting regularly with the Board of Public Works President Kevin James, representatives from the Mayor’s office, LA Department of Transportation, Screen Actors Guild, Motion Picture Association of America and FilmLA to reach consensus on a color. This month, Blumenfield unveiled a solution that uses a new shade of green paint that meets federal requirements and is accepted to both bicycle advocacy groups and filmmakers.  The placement of green bike lanes is decided on a case by case basis taking into account various factors. This consensus color will enable more green bike lanes to be installed without disturbing filming.

“This is a common sense solution that I am pleased to have shepherded,” said Blumenfield. “As an advocate for both safe bicycling and local filmmaking, this is a win-win for our City.”

This stretch of new paint can be found in Boyle Heights on 1st street and Bailey Avenue. 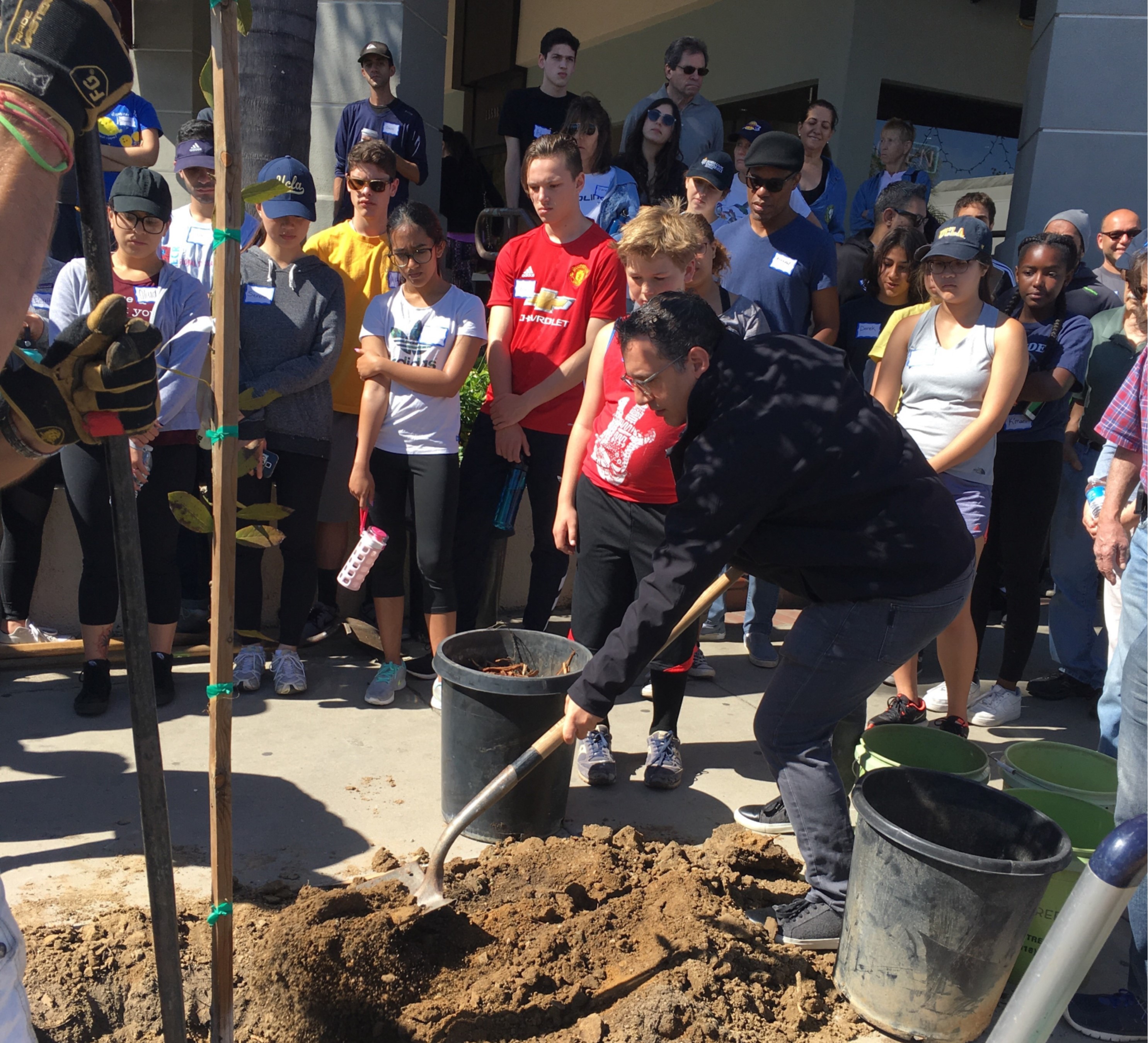 Blumenfield wants to extend a special thank you to all the sponsors who graciously donated delicious food including Bea's Bakery, California Pizza Kitchen, El Pollo Loco, and Ameche's Pizzeria. 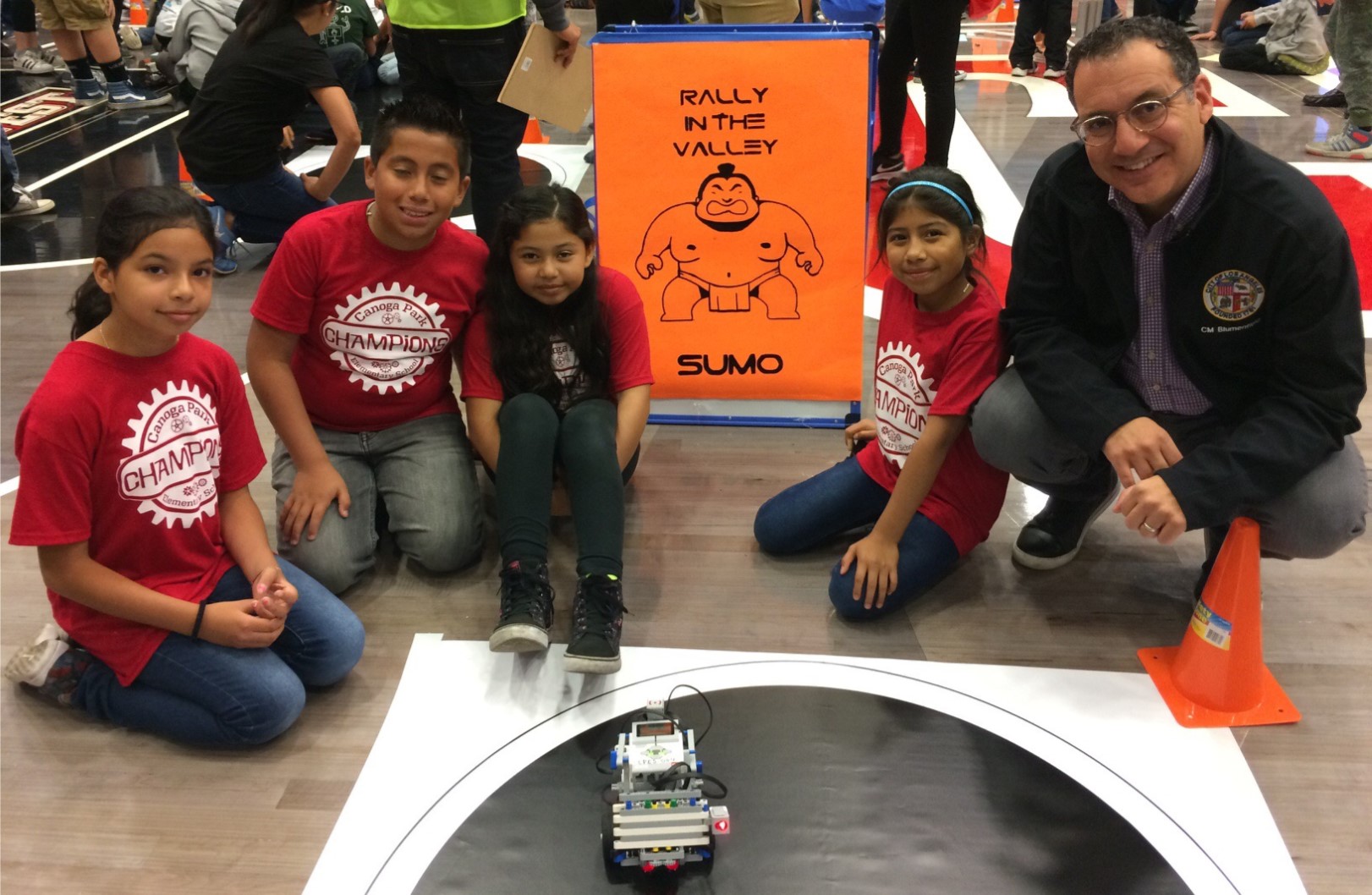 On May 6th, Blumenfield met the next generation of engineers at the Rally in the Valley Robotics Challenge. Joined by students and teachers from Stanley Mosk Elementary, Hart Street Elementary and Canoga Park Elementary, Blumenfield spoke on the importance of a STEAM education, helping prepare West Valley youth for the jobs and challenges of the 21st century. 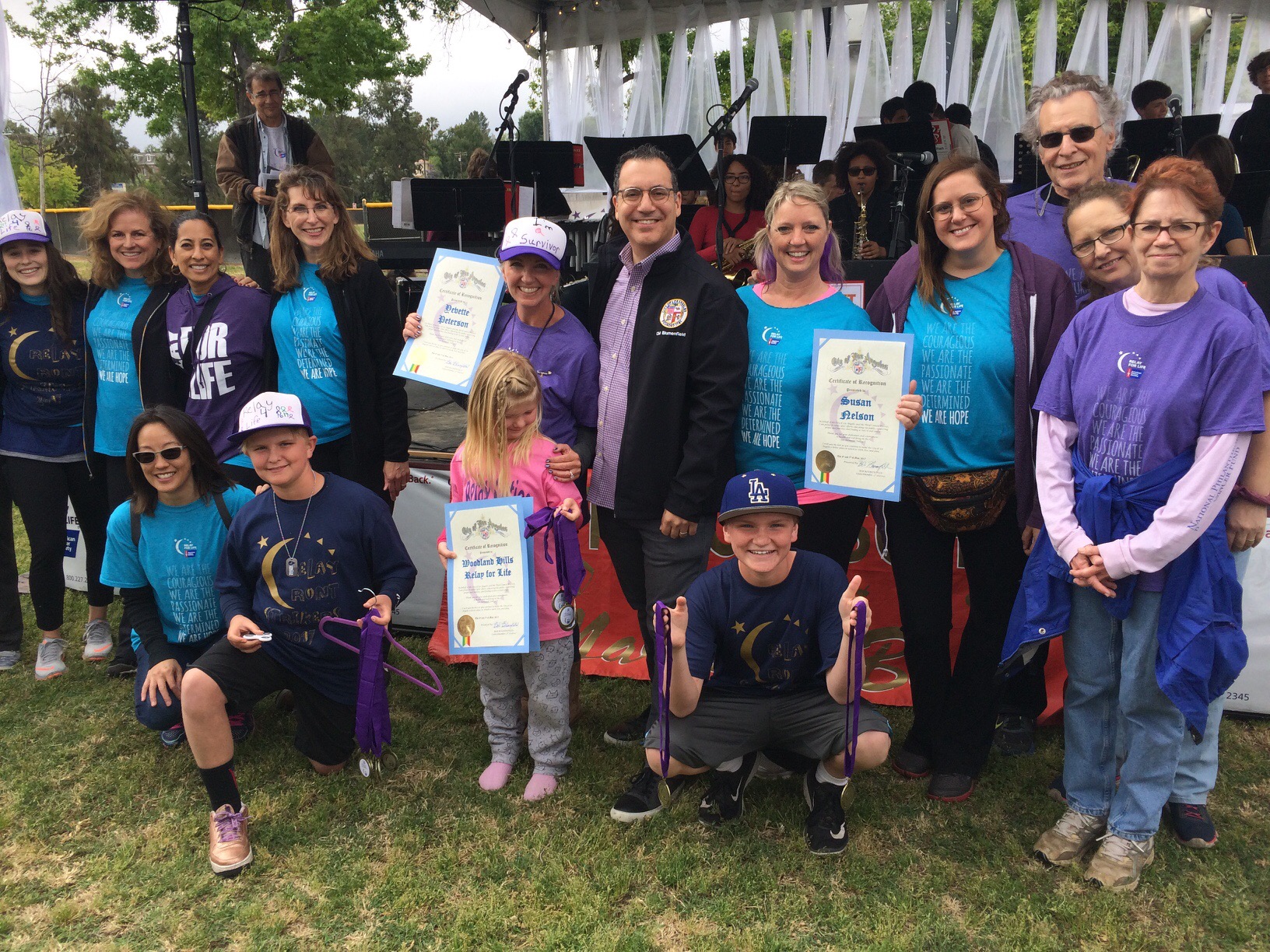 On May 6, Blumenfield joined organizers and volunteers at Relay for Life in Woodland Hills. He thanked and celebrated Yevette Peterson, Susan Nelson, and the entire Relay for Life event leadership team for all of the work they do to raise funds and awareness in the fight against cancer.