Last week, the City of Los Angeles and The Los Angeles Alliance for Human Rights unveiled a settlement in the years-long litigation focused on obligations to provide housing and services to unhoused Angelenos. Since 2020, I’ve been calling for an agreement to provide shelter and keep areas clear of encampments consistent with previous settlements in Orange County. Throughout the process, I have taken the presiding Judge, David O. Carter, to the West Valley on multiple occasions to see firsthand what we see and to engage in meaningful policy discussion. Much of what we talked about, including the possibility of enforcing anti-encampment laws on a district specific basis, is reflected in this remarkable settlement agreement.

Each district in Los Angeles is bigger in population than 99 percent of America’s cities and today’s agreement makes a seemingly impossible task into one that is actually achievable. Importantly, the settlement represents a floor, not a ceiling for what the City will be doing. But, the co-litigant in the case, the County of Los Angeles, is not participating in the agreement and that has major implications. It's sad that they don't seem close to settling their part of the bargain — providing more mental health and drug addiction services. The lawsuit against the County will continue, but I sincerely hope that they too will come to view settlement as an opportunity for making real progress on homelessness rather than as losing an opportunity to fight out a legal point.

With our plan laid out for housing, the County needs to step up to the plate. The County receives millions of dollars to provide mental health services and half of Measure H monies go directly to their departments, yet we are not getting enough access to these services. To solve this humanitarian crisis, we need more intensive services for those on the streets, more mental health and drug services on-site at our housing interventions, and more County beds dedicated to those with addiction and serious mental health issues. And, we’d like to see more teams helping those who need it most. Now that the City has settled, the lawsuit can more intensely focus on pushing the County to do its part. If the lawsuit doesn’t produce results, and if the County doesn’t meet its obligations, the City will be forced to create its own, city-run social services departments; the status quo is far beyond unacceptable.

As always feel free to send me questions and comments at [email protected] or call my district office at 818.774.4330.

To distinguish the cultural tradition of hookah, and not hurt the small businesses that sell flavored “shisha”  for hookah, the Council adopted ordinance exempts shisha tobacco being used at hookah lounges. Regulations have been placed on these hookah lounges which prohibits people under 21 years old from entering. 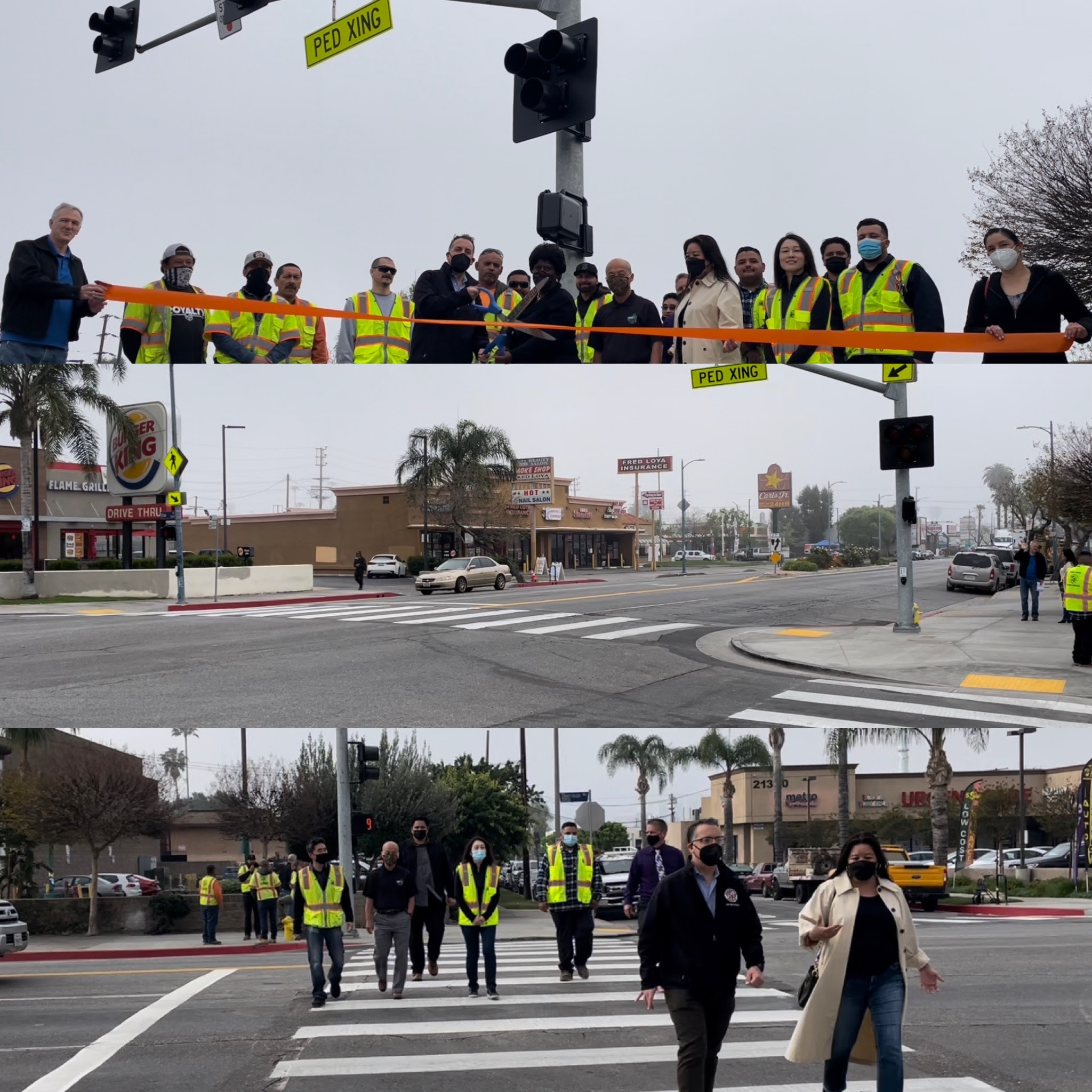 Earlier this week, Blumenfield joined StreetsLA and the Los Angeles Department of Transportation to unveil the latest pedestrian improvement project in Canoga Park. Funded by the California Transportation Commission through the Active Transportation Program, this is a great example of the infrastructure being created in the SFV. Watch the video recap here.

This transformative $41M Connecting Canoga Park Project consists of a range of enhancements beyond just pedestrian lights, protected bike lanes and curb extensions. It also includes new sidewalks on blocks that don't have them, street trees, and shade structures at the Orange Line Station.

And there’s more to come. The area also recently received a $31 million ATP grant for a suite of improvements to make it safer and more comfortable to walk, use transit, bike and drive in Canoga Park. Blumenfield is committed to making the West Valley a safer place for all. 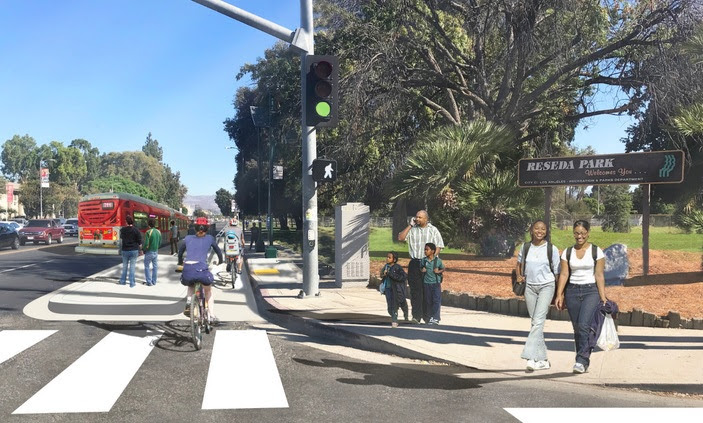 StreetsLA has been diligently working on the Reseda Complete Streets Project since the kickoff in October 2020. For a year and a half, crews have worked on rebuilding driveways, sidewalks, and curb ramps making it a safer, smoother surface for people walking, rolling, and driving on Reseda Blvd. Crews are also constructing mid-block curb ramps to ensure that people who are using a wheelchair or other mobility device have the proper and safe access to safely cross the bike lane and get on the sidewalk.

Much more is coming this summer, including an upgrade to new protected left-turn signals at 8 locations at Reseda Blvd and 11 new bus boarding islands which will help to improve efficiency with bus pick-up and drop-off and safety for bicyclists as the island will be separate from the bike lanes. Learn more about this project here.

Supporting the Dog and Cat Bill of Rights 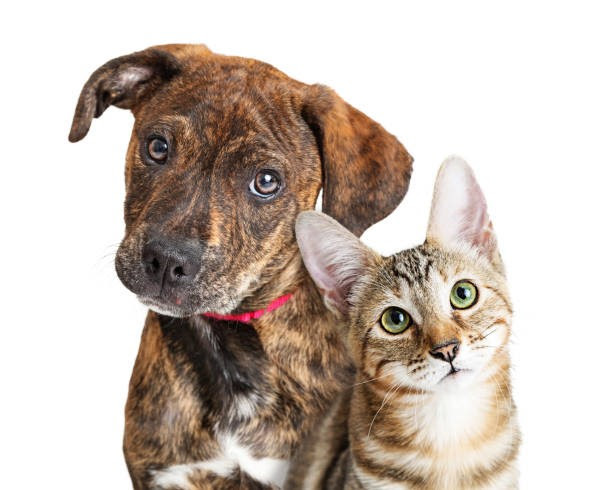 At the request of the Tarzana Neighborhood Council, Councilmember Blumenfield recently introduced a City Council resolution to support the “Dog and Cat Bill of Rights'' that is moving through the State Legislature. AB1881, by Assemblymember Santiago, would promote the health and well-being of and fight against cruelty toward dogs and cats. Blumenfield is strongly committed to fighting for animal welfare in LA and works hard to advocate on behalf of animals, whose cruel treatment often goes unnoticed and unaddressed. The resolution will first be reviewed by the Rules, Elections, Intergovernmental Relations Committee before a vote by the full City Council. 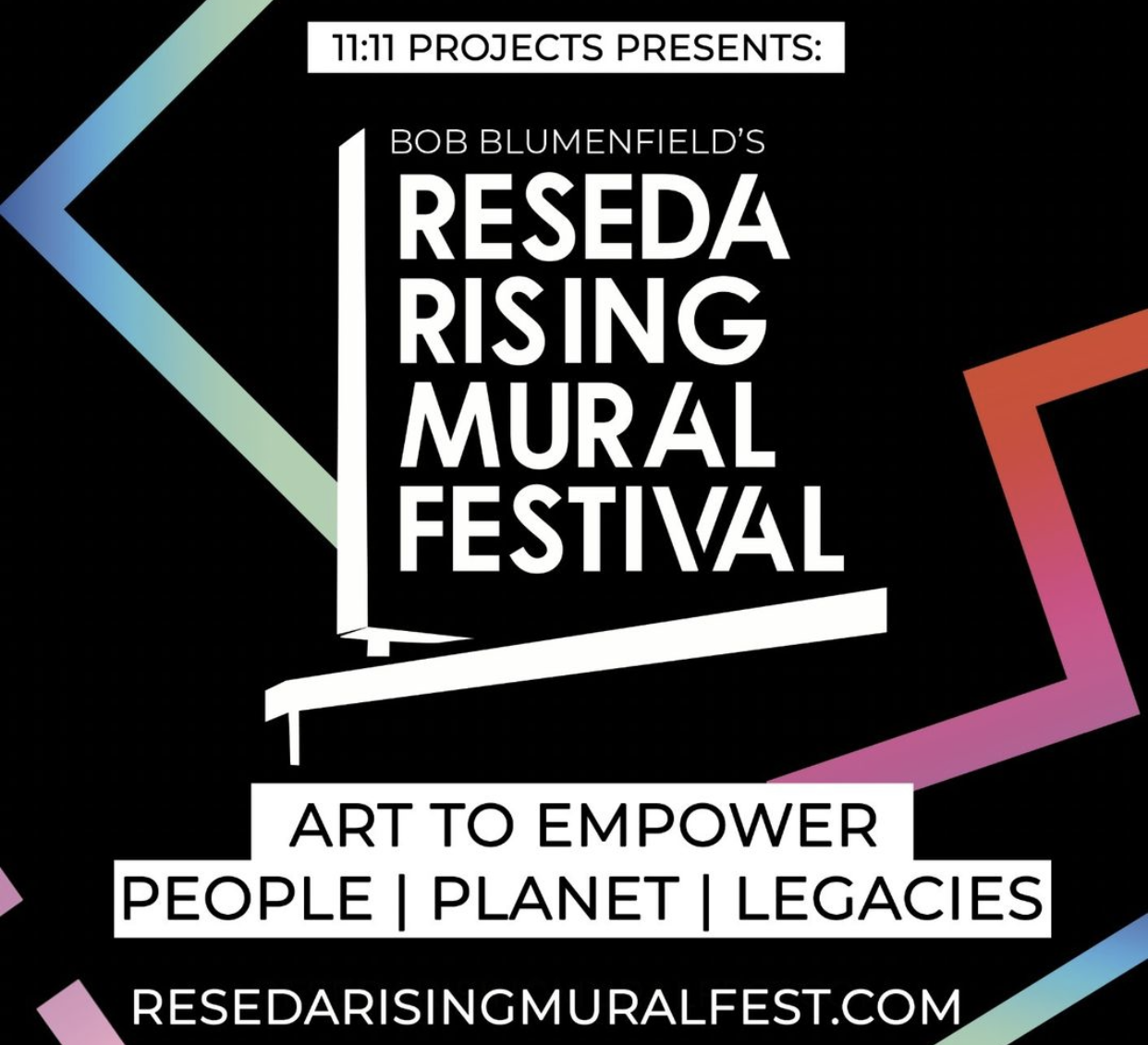 Save the date for Councilmember Blumenfield’s Reseda is Rising Mural Festival on April 28-May 1, 2022 to celebrate the work of local artists and support local businesses. In partnership with 11:11 Projects/A Creative Collective, the Reseda Rising Mural Festival is the continuation of Blumenfield’s Reseda Rising annual ArtWalk. It is the COVID safe expression of this successful event.  This event has been two years in the planning as the City pivoted in response to COVID-19 conditions. It will ultimately involve the creation of a dozen new murals that will beautify Reseda and serve as a lasting monument to its vibrant culture and artistic spirit. One mural has already been completed, multiple murals will be painted during the festival, and additional ones will be completed later in the year. 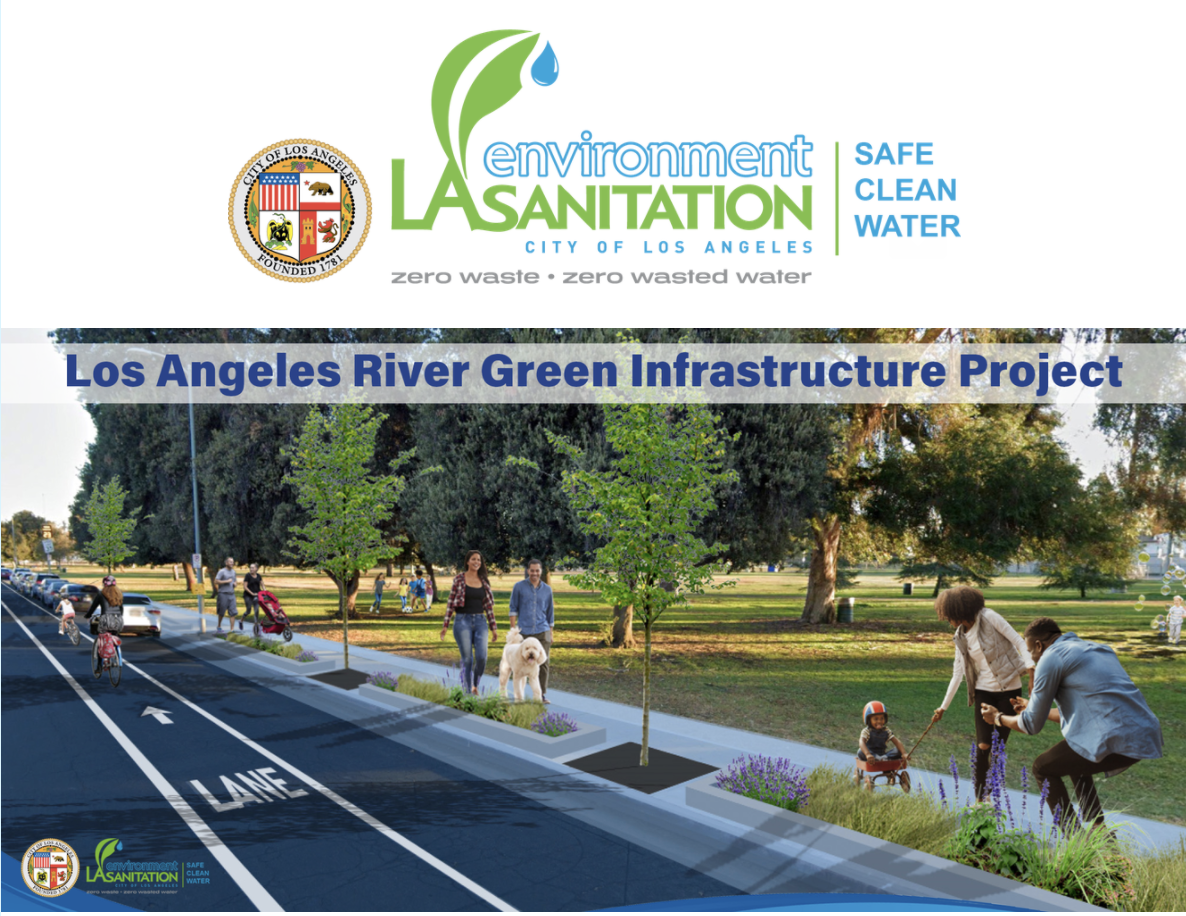 Blumenfield thanks the community members who submitted public comment to the Upper Los Angeles River Watershed Area Steering Committee (ULAR WASC) in support of the LA River Green Infrastructure Project. This $31.8 million project would add bioswales and tree wells to create landscaping and shade while diverting rain from storm drains in every neighborhood along the Los Angeles River in the West Valley--on Independence Avenue in Canoga Park, on Winnetka Avenue in Winnetka, at Wilbur/Victory on the border of Reseda and Tarzana; next to Reseda Park; and on White Oak in Encino. It would also include less visible underground structures to divert some polluted water runoff to the Donald C. Tillman Water Reclamation Plant in the Sepulveda Basin for treatment and use. In short, the project would reduce localized flooding, green the community, create beautiful outdoor spaces, and remove pollutants from the LA River. 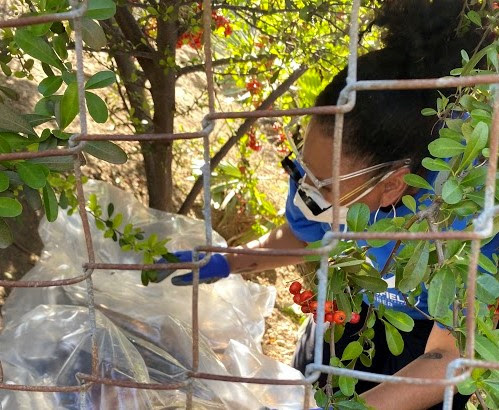 Earlier this week, a senior couple reached out to Councilmember Blumenfield for assistance in removing their deceased dog from their backyard. Sadly their beloved dog was attacked by a coyote and due to COVID 19 policies, Animal Services and LA Sanitation were unable to enter their home to retrieve the deceased pet. The animal was too heavy for them to move on their own.  Knowing how painful it is to lose a furry loved one, Team Blumenfield jumped into action and removed the deceased dog from their backyard and transported the body for proper disposal. While removing deceased animals is not part of Team Blumenfield’s job description, the ethos of the office is to solve problems and always try to find a way, even when that means removing a dead animal. Blumenfield takes pride in the team’s hands-on approach.

Coyote attacks have become more frequent in suburban and urban areas, and Team Blumenfield urges everyone to keep an eye on pets when outside and to avoid letting dogs off leash in areas where coyotes may be present. 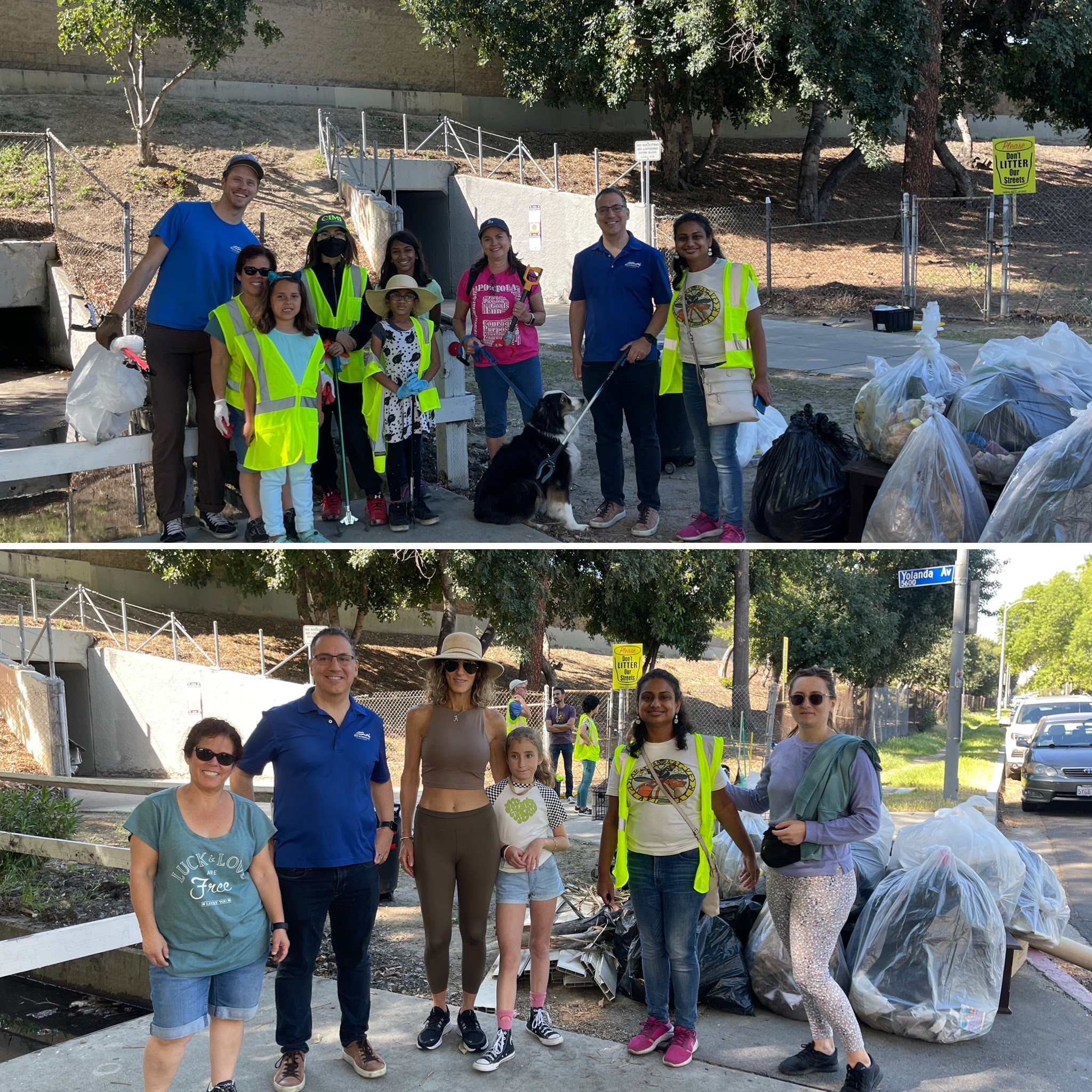 Blumenfield connected with Tarzana residents and students from Portola Charter Middle School and Taft Charter High School for a cleanup of the Yolanda Pedestrian tunnel. Blumenfield was happy to join their efforts in keeping the West Valley clean and green. 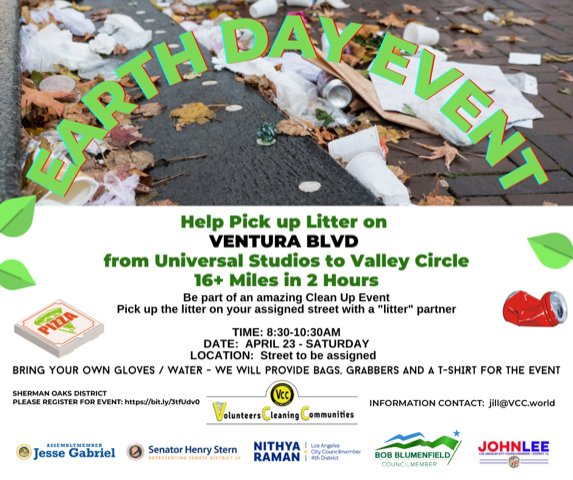 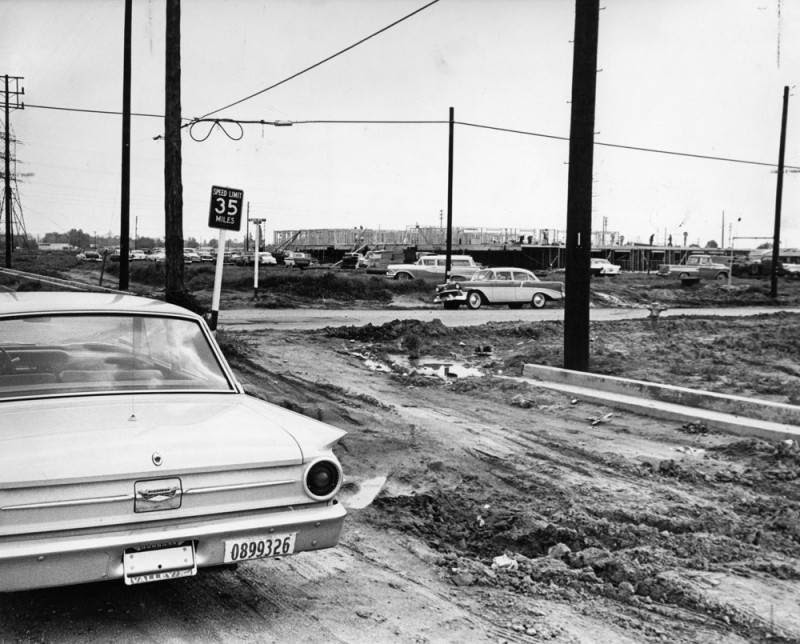 This week's photo from the Los Angeles Public Library's archives is from the Valley Times on April 2, 1962. Housing and infrastructure improvements begin at the corner of Vanowen and Vanalden in Reseda. Learn more about this photo here.