As of yesterday, April 15, all Angelenos 16+ are eligible to make their appointment for a COVID-19 vaccine. This is a huge step in our fight to end the pandemic and move towards a brighter future. We are finally seeing some light at the end of the tunnel. 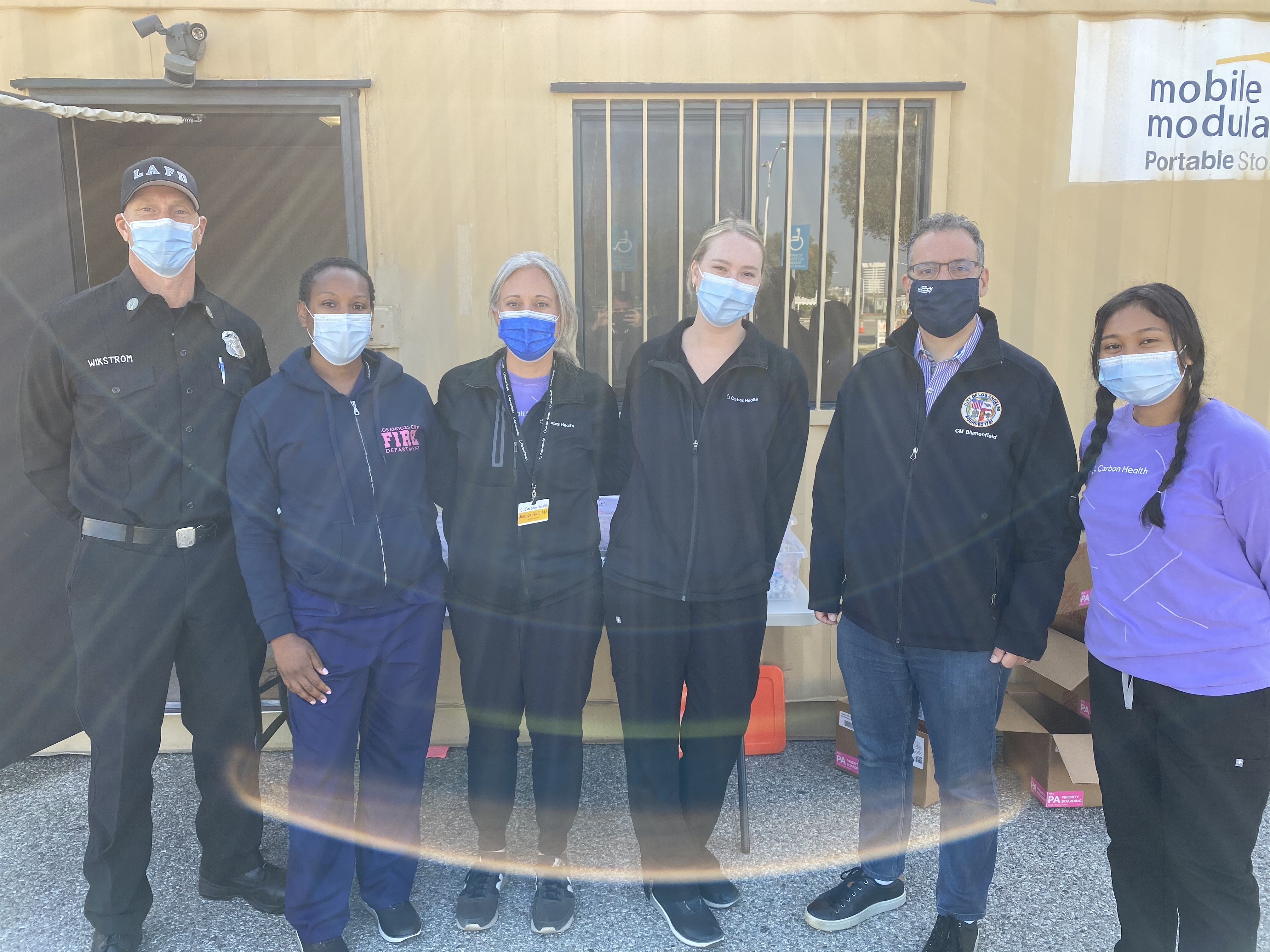 Although, out of an abundance of caution, the administering of the Johnson and Johnson vaccine has been temporarily paused, Moderna and Pfizer doses are still available so please book your appointment as we all try to rapidly move towards a better tomorrow. We are vaccinating thousands of Angelenos a day at our Pierce College site alone and dozens of other sites are open around the city. As of yesterday, the City of LA’s vaccine program reached a major milestone giving a total 1 million doses. Every single vaccination brings LA one step closer to closing the chapter on COVID-19. Be sure to book your appointment today at Coronavirus.LAcity.org/VaxAppointment.

In this newsletter, you will get updates about my efforts to address homelessness, the latest legislative updates, and some community news and upcoming events. If you have any additional questions or concerns, please do not hesitate to contact me at [email protected] or by calling 818-774-4330.

Do you know a homebound senior who is trying to get vaccinated?

Starting this week, Councilmember Bob Blumenfield is proud to announce a partnership with the Mayor’s office to get homebound people the COVID-19 vaccine. If you or a loved one is homebound and is interested in getting vaccinated, please email [email protected] with the subject line Homebound Senior Vaccine Help.

Want to get vaccinated but can’t drive to your appointment? Uber Discount Codes Available

Councilmember Blumenfield and Mayor Eric Garcetti announced that the City and the Mayor’s Fund for Los Angeles have partnered with Uber to provide 20,000 discounted rides to bring L.A. residents to vaccination appointments. To learn more about this program and whether you are eligible to receive a code, please email [email protected] with the subject line Uber Vaccine Code. 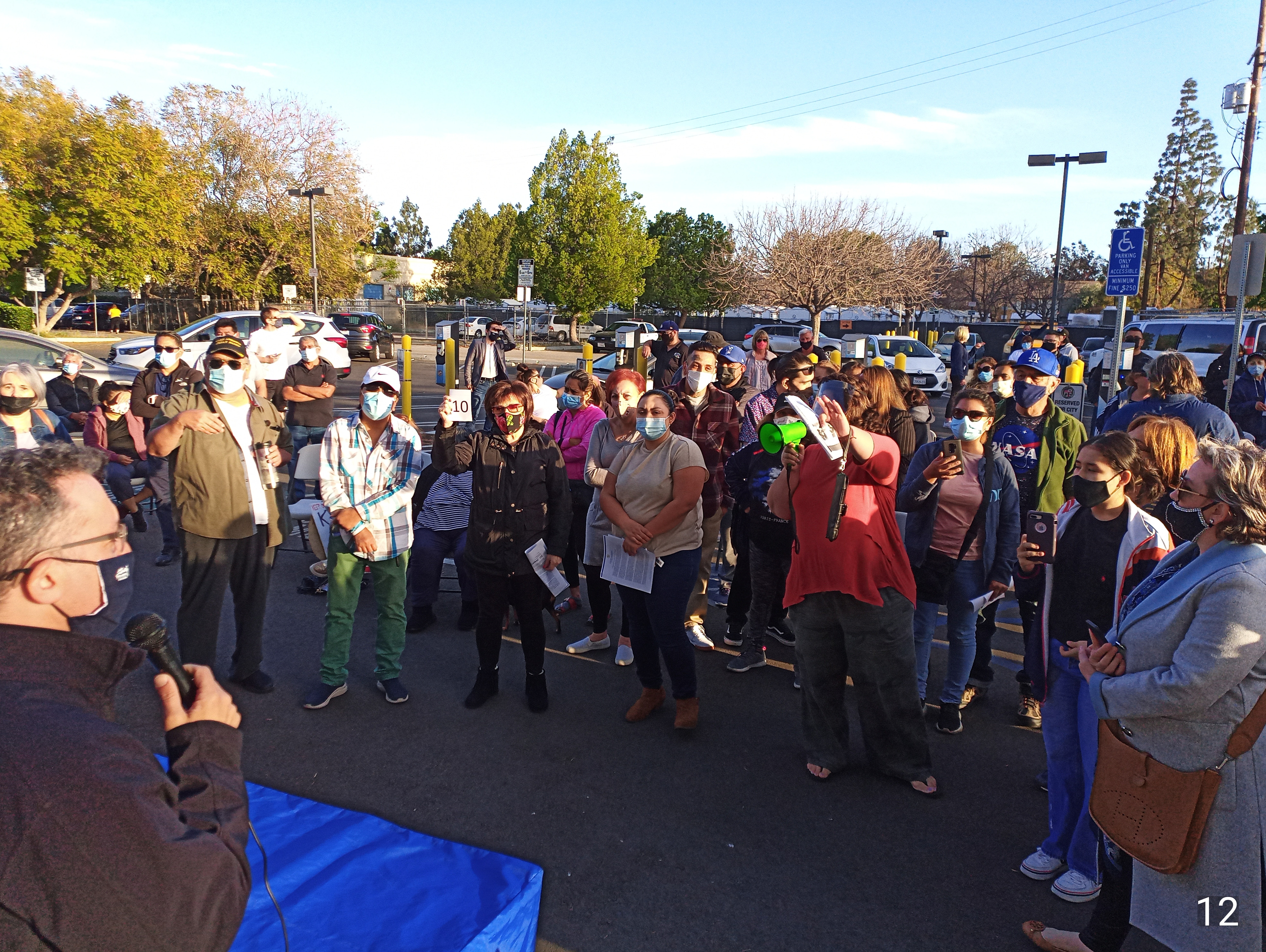 On Wednesday night, Councilmember Blumenfield held an in-person,masked meeting with Reseda residents who requested it to answer questions about the cabin community that is under construction on the parking lot of his District Office. Blumenfield has been actively communicating with nearby residents about this project since Fall 2020 in an effort to be transparent and forthcoming whenever any homeless services are being developed in his district. Since the beginning of the process, Blumenfield has sent the nearby community five group letters and 65 personal letters via email to residents who wrote to him. He has called many neighbors personally to talk about the project and held dozens of zoom meetings for those who wanted to meet virtually.  Blumenfield also hosted a virtual presentation on the cabins in December 2020 and it has been featured in the news and social media several times so community members can learn about the site and the importance of this project in the Citywide effort to end homelessness.

Blumenfield was joined by Ken Craft, the Executive Director of Hope of the Valley. As the service provider for this site Ken can answer questions from the community about who will be admitted to these cabins, and what safety measures will be put in place to make Reseda residents feel at ease. Unfortunately, due to yelling from some neighbors, Ken and Blumenfield were unable to audibly answer some of the questions. To get a glimpse of the meeting, click here to watch video coverage from CBS Los Angeles. Blumenfield and Ken will continue to meet virtually with any local neighbor who wants to talk about this project and will continue their efforts to quell local fears and concerns.

Since participants may feel safer to join in online, Blumenfield will be hosting an interactive online town hall on April 22 to answer questions about the cabin communities. To learn more about this event, email [email protected] 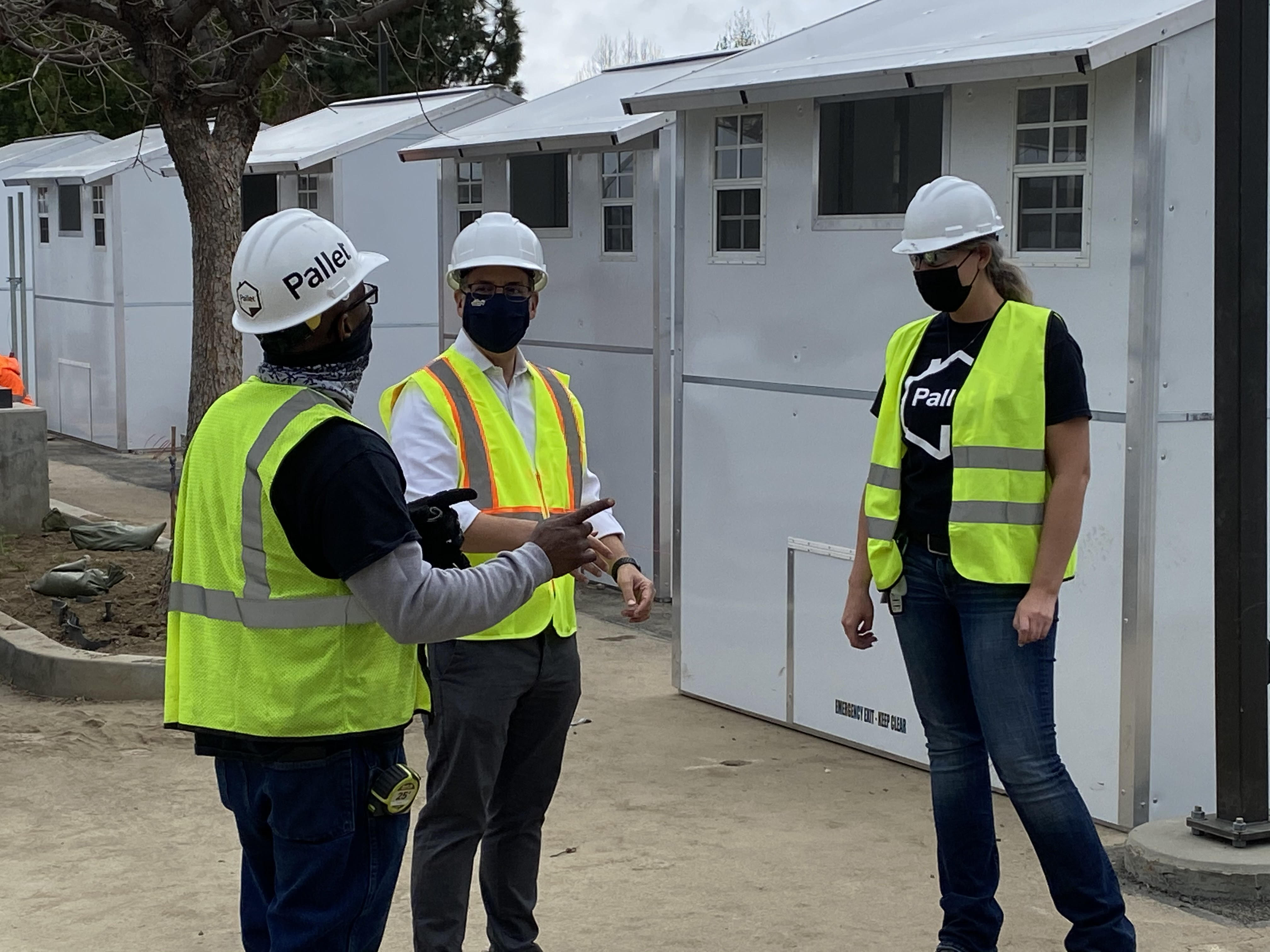 Blumenfield touring the Cabin Community site behind his District Office.

Last week the City Council officially approved the agreement with Hope of the Valley to operate the 52 tiny home Cabin Community behind Blumenfield’s District Office in Reseda. Hope of the Valley is a homeless service provider whose mission is to prevent, reduce and eliminate poverty, hunger and homelessness. Hope of the Valley operates bridge housing shelters in Van Nuys and Pacoima as well as new Cabin communities in North Hollywood. The first Cabin Community in the district is slated to open in early May. Security will be on site 24/7, and residents will be provided services to help them move forward to permanent housing and a better life. Stay tuned for more updates.

The City is in the process of selecting a new contractor to provide bus shelters and other amenities for bus riders. Without them, bus riders are often forced to wait in sweltering heat. That is a particular problem in the West Valley, where the heat is intense and waits for buses can be long. The new contractor will provide the bus shelters at no cost to the City in exchange for permission to include advertisements on them, some of which may be digital. The City is also expected to share in the advertising revenue, which could be used to plant trees, repair sidewalks or for other neighborhood projects. Councilmember Blumenfield is working to ensure these new bus shelters are a benefit to the neighborhoods and not a distracting safety risk for drivers, pedestrians, and cyclists. This week, the Public Works Committee, chaired by Councilmember Blumenfield, directed Streets LA to station proposed bus shelter designs at various locations across the City, on a temporary basis, to give Angelenos a chance to view proposed technologies and provide input before a contractor is selected. For more information, visit https://streetsla.lacity.org/coordinated-street-furniture-program. Councilmember Blumenfield will provide additional updates when technology demonstrations are scheduled in the West Valley.

To support renters and low income defendants in civil cases where lacking an attorney can have devastating consequences, the City Council approved Councilmember Blumenfield's resolution to support any Federal and State legislation that would establish a right to counsel in immigration matters, eviction and unlawful detainers.

Blumenfield is concerned about a wave of residential evictions when federal, state and city eviction moratoriums expire.  As in so many areas where other levels of government are not fulfilling their legal and moral obligations to the people they serve, the City has stepped up to try to fill that gap. While LA has provided some legal assistance with city and federal relief funds, the City doesn’t have unlimited funds to help everyone in need. While the City of Los Angeles will continue to do what it can, this resolution calls on the federal and state governments to recognize and fund a right to civil counsel in cases with life-altering outcomes.

From March 30 to April 30, eligible Angeleno renters may apply for the second round of the City of LA’s Emergency Rental Assistance Program. If you were put on the waiting list last year, you were the first to be contacted by HCIDLA about the new round of assistance funds. Click here to learn more about eligibility and the application process. 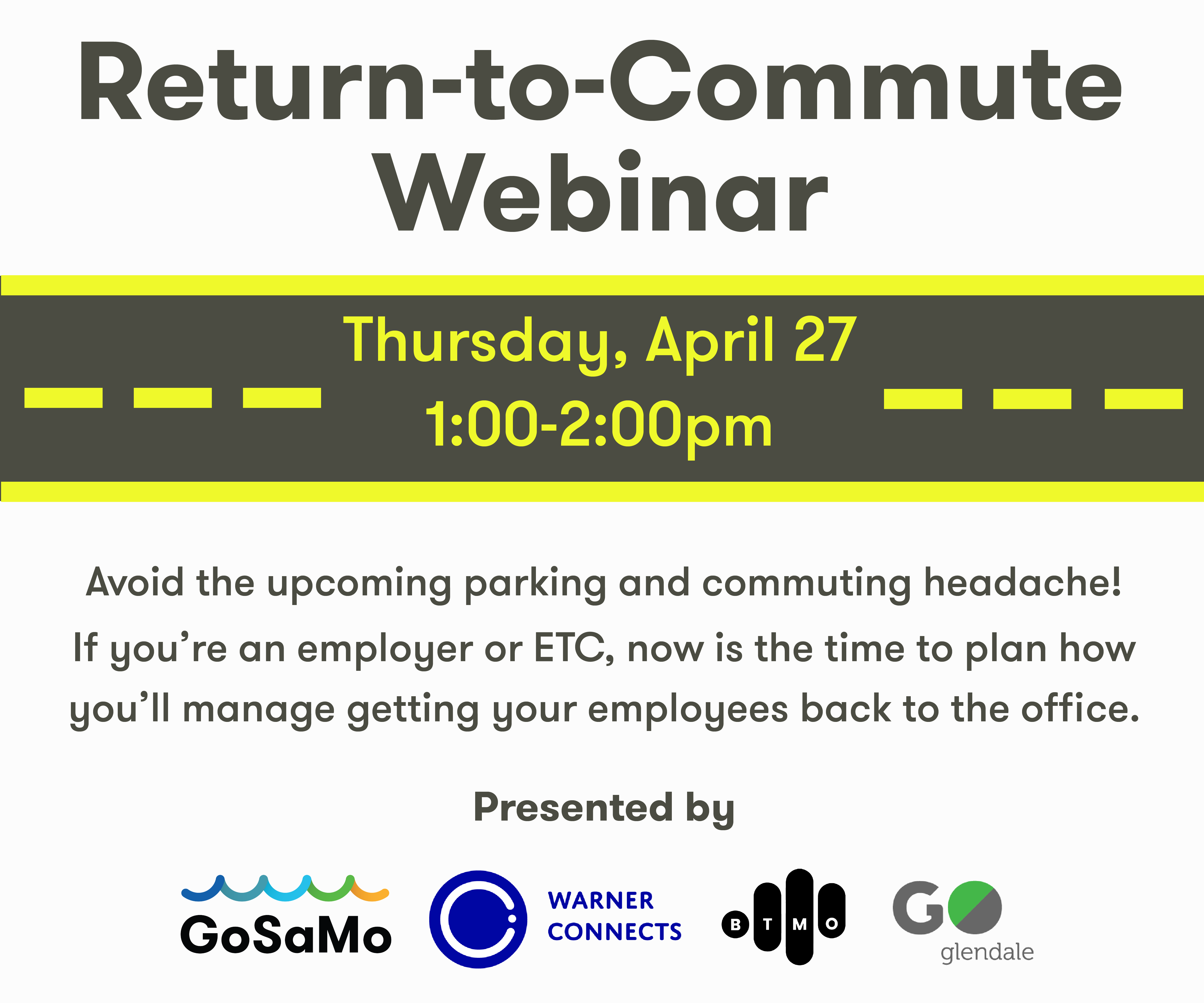 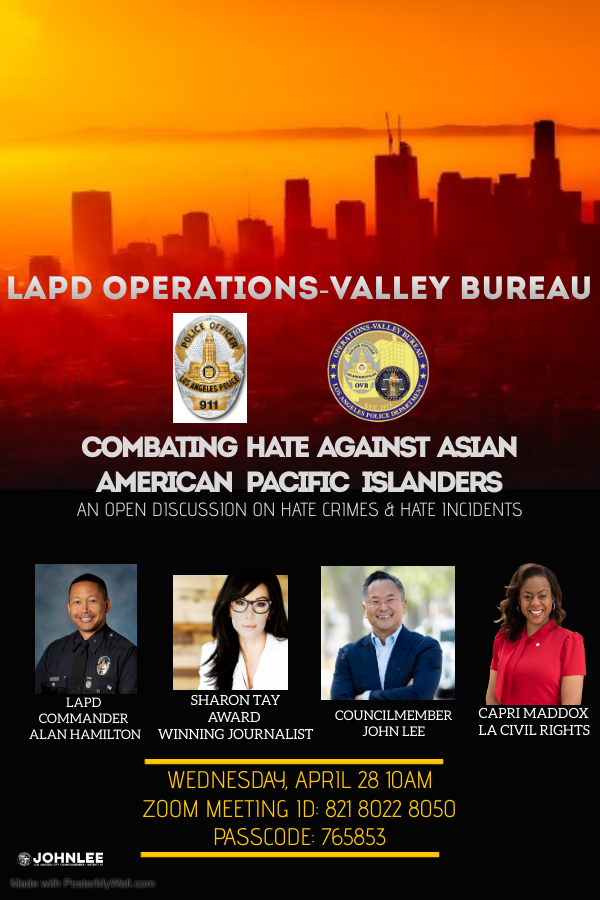 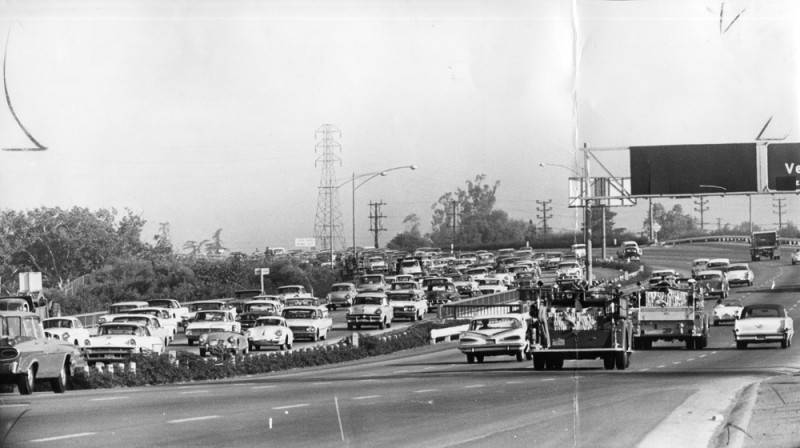 Team Blumenfield is partnering with the Los Angeles Public Library’s (LAPL) photo archive to highlight historic photos of the West Valley. This week's photo was taken in 1961 and shows a congested 101 Freeway packed with commuters. This photo’s caption reports a rapid growth in the West Valley, and between 1950-1960 many West Valley communities doubled in population.  To meet the population growth that continues to this day, Councilmember Blumenfield is actively working on making transit alternatives a more viable option for West Valley residents. To learn more about the archived photo, click here.