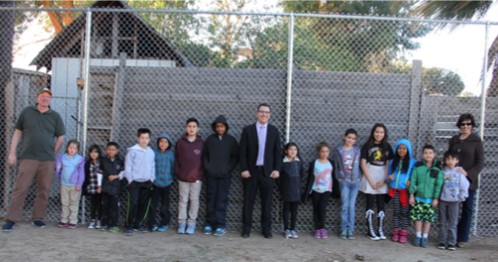 Since his election, Blumenfield has been working to address issues at the Winnetka Recreation Center.

In particular, homeowners adjacent to the recreation center reported problems with homeless encampments on their property due to lack of adequate demarcation of the park’s boundaries.

Blumenfield responded to constituent concerns and worked to have a new, 10 foot high fence, completed in 2016, installed between the park and homes on the other side to provide much needed peace of mind while respecting the park’s role as a central gathering place for the community.

Blumenfield is currently working with Recreation and Parks to reconfigure the park’s picnic area to be more visible, and farther away from adjacent homeowners and child care center.

Above: Blumenfield is joined by local residents, recreation staff and children from the onsite daycare facility to celebrate the fence installation on February 5, 2016. 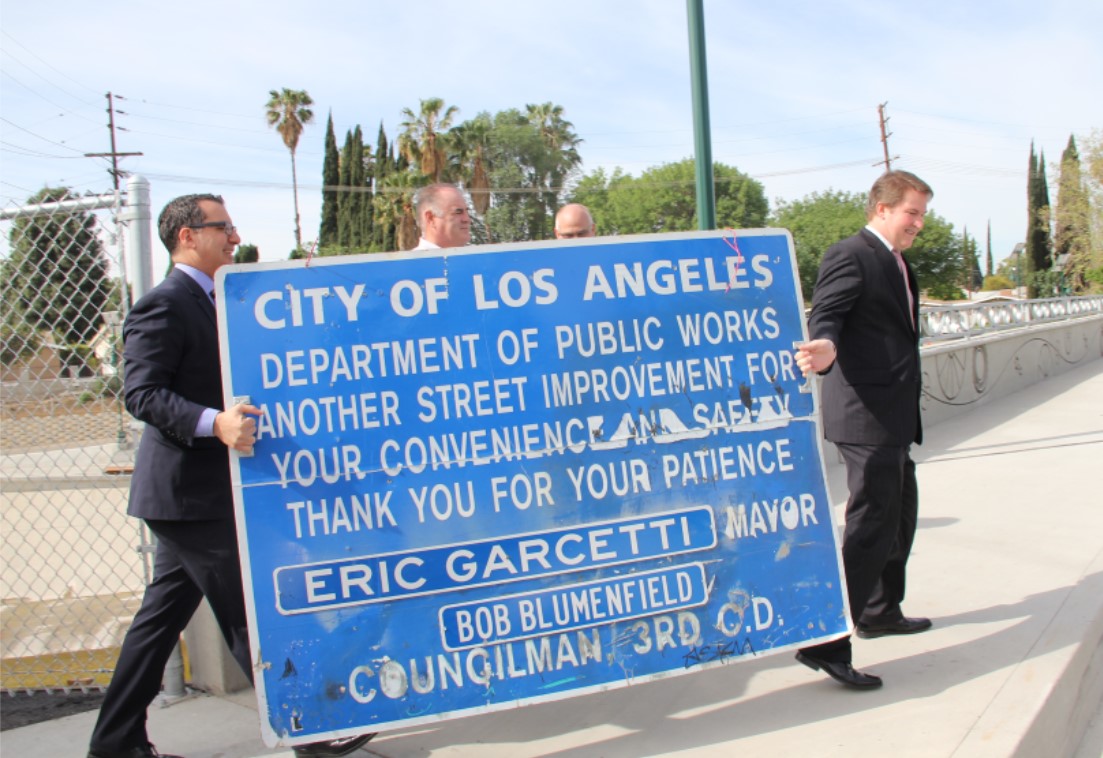 In March 2014, Blumenfield pushed for and succeeded in reopening the Vanowen Street Bridge. The bridge had been closed or under construction for three long years, and needed his leadership at City Hall to finally get it done.

The north side of the bridge was closed on December 22, 2010 after a large hole was discovered on the bridge deck due to heavy rain and erosion.

Project improvements created a safer and more attractive bridge and included: A) replacing and widening the existing bridge by approximately 11 feet on the south side and 14 feet on the north; B) widening the roadway approaches to match the new bridge width; C) replacing the existing barrier rails with architectural barrier railings; and D) installing new street lighting on the bridge and new traffic signals at the intersection of Mason Avenue and Vanowen Street.

Above: Board of Public Works President Kevin James joins Councilmember Bob Blumenfield in removing the sign that had alerted drivers and pedestrians to bridge construction since 2011, on March 20, 2014. 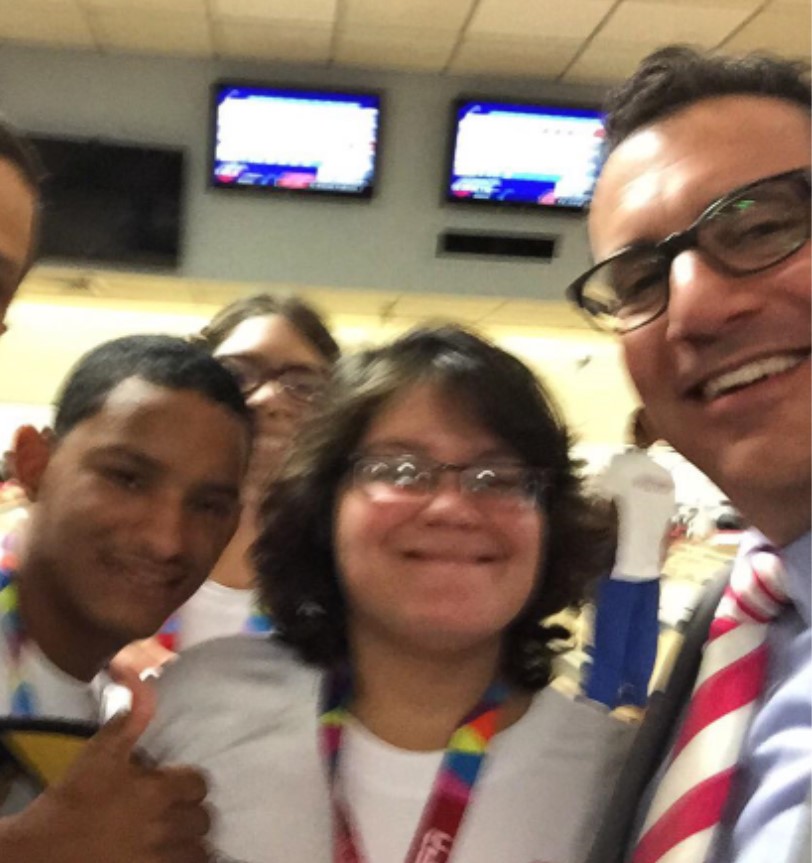 Winnetka and its local chamber of commerce welcomed the delegation from Venezuela, providing hospitality as well as arranging entertainment such as trips to the Winnetka Bowl and the Los Angeles Discovery Cube.

Blumenfield has a long history of advocacy on behalf of persons living with intellectual disabilities. As Chair of the California State Assembly’s Budget Committee from 2009-2013, Blumenfield worked to protect service providers from painful budget cuts and co-sponsored the landmark “self-determination” bill that gave families more control over their loved ones’ treatment decisions.

Recently, Blumenfield led the effort to allow certain nonprofits, including many that serve the intellectually or developmentally disabled, extra time to adjust budgets to citywide increases in the minimum wage.

Above: Blumenfield poses for a selfie with members of the Venezuelan delegation to the Special Olympics during an outing to the Winnetka Bowl, on July 23, 2015. 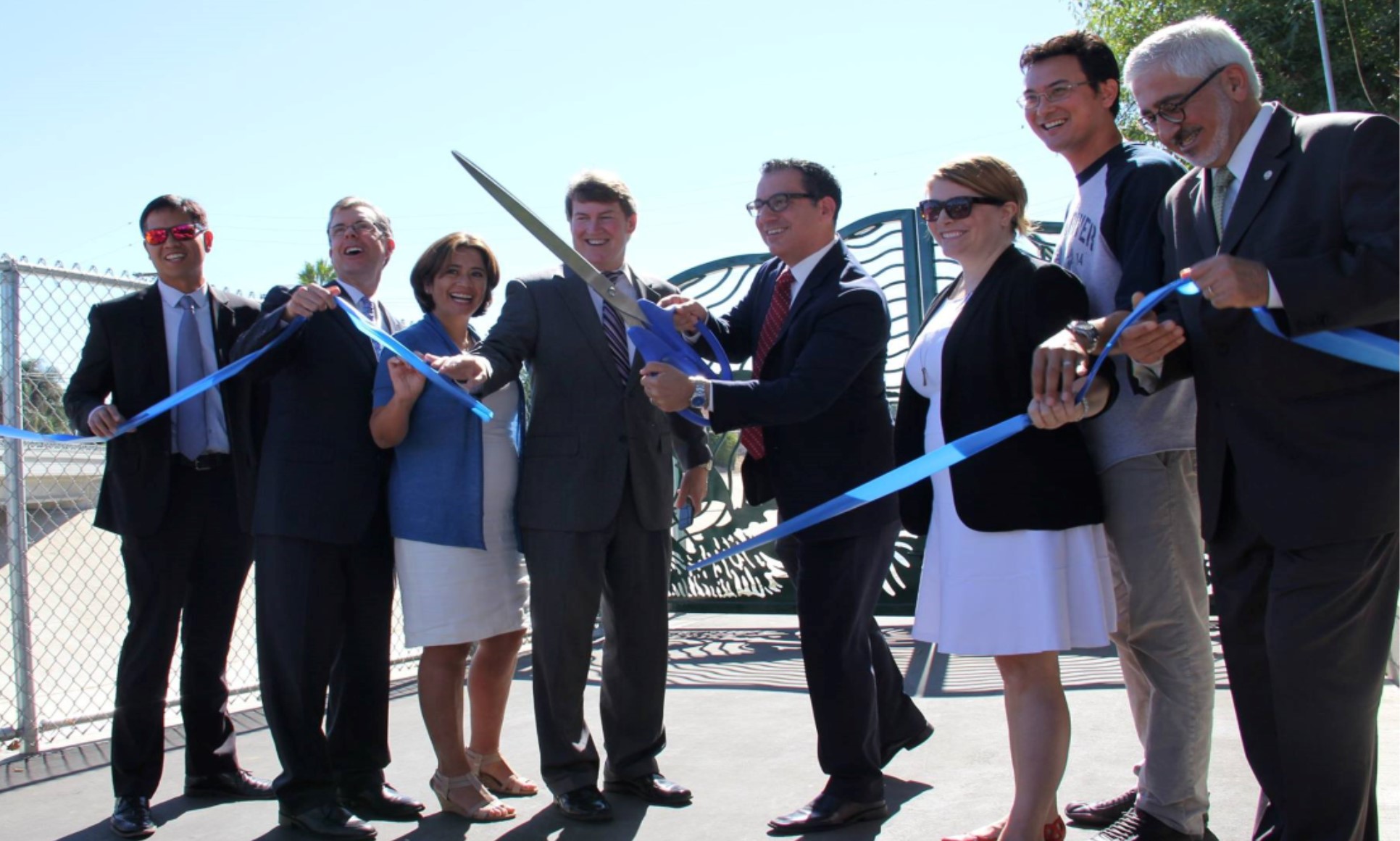 In August 2014, Councilmember Bob Blumenfield was joined by City officials and community members to cut the ribbon on the third and final phase of the LA River Bikeway, running along the southern portion of the Los Angeles River from Winnetka to Mason. The first phase begins at Vanalden.

“The completion of the LA River Bikeway project is a milestone accomplishment in realizing the dream of the LA River as a 51-mile long natural and recreational resource, and is an important addition to the bike infrastructure of the Valley,” said Blumenfield.

Phases 1 and 2 had extended the bikeway from Vanalden Ave. to Winnetka Ave., and with the final section now complete, West Valley residents have access to 2-miles of uninterrupted bikeway to promote both multi-modal transportation and healthy lifestyles.

Blumenfield continues to pursue opportunities to take advantage of Valley portion of the River as a recreational resource via the Los Angeles River Master Plan.

Above: Blumenfield cuts the ribbon on 2 miles of uninterrupted bikeway along the Los Angeles River in Winnetka, on August 28, 2014.

Winnetka is a bedroom community in the Southwest San Fernando Valley. Founded in 1922, Winnetka is home to the Winnetka Bowl and also has other entertainment and shopping opportunities for locals.

Winnetka was made famous by KGIL Radio's Sweet Dick Whittington whose greatest fame in the Los Angeles market was in the morning drive time broadcast from the "Sin Fernando Valley." The street boundaries of Winnetka are Nordhoff to the North, De Soto Ave. to the West, Victory Blvd. to the South, and Corbin Ave. to the East.

Winnetka Neighborhood Council
Meetings are held the 2nd Tuesday of each month at 6:30pm