What is Reseda Rising?

Reseda Rising is Councilmember Bob Blumenfield’s multi-front initiative to reinvest in the community and help Reseda attain its former glory as a center for entertainment and small business. Recognizing the challenges presented by the dissolution of the Community Redevelopment Agency (CRA) in 2011, Blumenfield launched this initiative to develop a shared community vision for Reseda, and to support the commercial activity that will make Reseda once again into a destination for commerce, art and culture.

In 2015 Blumenfield engaged the non-profit Los Angeles Neighborhood Initiative (LANI), an organization that specializes in building consensus in communities around the future of their neighborhoods. They are helping the community focus and organize to actualize its vision and also identify additional resources to transform the neighborhood. This community vision will inform all aspects of Reseda Rising.

History of the Reseda Business District

Reseda’s business district came to fruition around 1915 when neighborhood businesses began to center around the intersection of Reseda Boulevard and Sherman Way. The community continued to grow and by the 1930’s the area was well known for its agricultural production, which resulted in the addition of a Southern Pacific Railroad train down the center of Sherman Way. 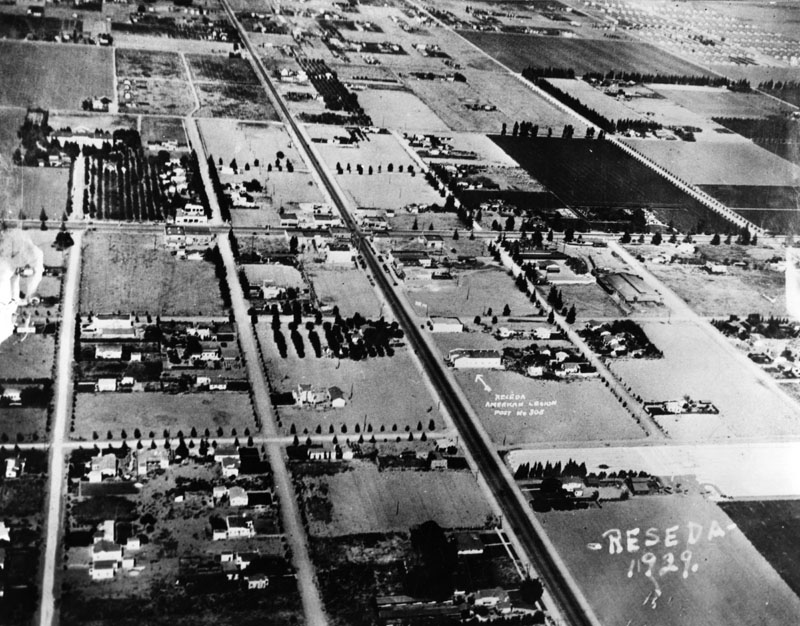 By the 1960’s, the San Fernando Valley was blossoming and Reseda had evolved into a prominent Los Angeles suburb. The increase in single-family dwellings stirred the development of several main street commercial hubs, full of vitality and character, throughout the entire Valley. However, with the rise in malls in the 1970’s, energy was absorbed from these commercial corridors, leaving under cared for properties in their place.

While in the 1980’s and 1990’s Reseda experienced a slight resurgence due to businesses like the Reseda Country Club—a concert venue which drew artists like Guns N’ Roses and Tom Petty—the corridor still lacked the activity and character for which it had once been known. Today, Reseda, along with other areas of the Valley, is fighting to reinvent its commercial corridor.

Where are the Opportunity Sites for Reseda Rising?

Although Reseda Rising and the community envision improvements and amenities throughout the Sherman Way corridor, there are two main locations where catalytic development opportunities can be found.

Originally built in 1948, the Reseda Theater sits in the heart of the Reseda Commercial District along Sherman Way. It has been vacant for over 22 years and has slowly deteriorated. Councilmember Blumenfield has been taking huge steps to revitalize this site.

Through the LANI managed community visioning effort, the need for an entertainment destination in Reseda was identified as a top priority. The community also made clear that fast food and other commercial uses were not desirable at this iconic location. Consistent with their direction, an RFP was developed and released to specify the type of development that would be welcomed at that location, including an entertainment use. Blumenfield also ensured that the Reseda Theater marquee, which is an iconic landmark, would be restored as part of the proposed projects in response to the RFP.

Following an independent “Request for Proposal” process, Thomas Safran and Associates (TSA) was selected as the best candidate for this location. TSA’s proposal includes a brand new mixed-use development consisting of a multi-screen Laemmle Reseda Theater, and affordable senior housing. In July 2016, Blumenfield passed a measure instructing city departments to proceed with an Exclusive Negotiating Agreement with TSA for the redevelopment of the site.

The Reseda Town Center, along the south side of Sherman Way, is envisioned to be developed as a public-private partnership. These two properties languished under the ownership of the former CRA and have attracted blight and nuisances to the area.

While thinking about how to best serve the community, and turning over every rock to find the resources to do it, Councilmember Blumenfield found Proposition K funds that were put aside in the 1990’s specifically for an ice rink. However, the funds were not enough to build out a first class rink. Consequently, Blumenfield sought out and partnered with the Los Angeles Kings to develop a proposal to build and operate the rink. This will leverage the Prop K funds and create a true destination location.

At multiple community meetings to gather input from the surrounding neighbors and greater Reseda area, LANI presented renderings and concepts for Reseda Town Center in line with these opportunities. At present, the vision for Town Center will add retail to Sherman Way at the street level, residential apartments – which are sorely needed in Los Angeles – and entertainment in the form of an ice skating / roller skating rink. What were derelict buildings, and are now vacant lots, one day could become quality retail for the community, apartments for residents, and a family-friendly attraction bringing people to our Great Street.

The planning, permitting, design and construction of these properties must follow a strict timetable to ensure the City retains control of the sites to pursue the community’s vision for entertainment and quality construction. These deadlines were set as a result of the dissolution of the CRA.

What Happened to the Community Redevelopment Agencies and What Did that Mean for Reseda?

Until it was dissolved in 2011, the Community Redevelopment Agency (CRA) was one of Los Angeles’ most important economic development accelerators. For Reseda, dissolution of the CRA created uncertainty around the status of Reseda’s three CRA owned properties as well as other properties throughout the city. Standing up for Reseda to ensure the Valley’s fair share, Councilmember Blumenfield successfully lobbied the CRA successor agencies, and the Governor, to allow the city to put together a development deal for these properties. However, the City was only given 36 months to make something happen or the properties would be sold with proceeds going to the State. He also managed to get $84 million dollars in “CRA excess bond fees” for the City, of which more than $20 million is earmarked for redevelopment areas in Blumenfield’s West Valley district. These properties, and the opportunity they present, form the lynchpin of the Reseda Rising effort along Sherman Way’s historic commercial corridor.

What Can I Do to Help Make Reseda Rise?

Reseda Rising is nothing without community input and shared vision. Please sign up with Councilmember Blumenfield to get updates about events, community meetings, and receive the latest news about Reseda Rising.  Also, do you have a story or picture to share about your Reseda experience? Please send it to us using the Contact Us button on the right.