New landscaping at the West Valley Municipal Center and branch library will educate while conserving water.

RESEDA, CA – As part of his ongoing work to “green the Valley,” Councilmember Bob Blumenfield today broke ground on the Blumenfield Water-Wise Demonstration Garden at the West Valley Municipal Center in Reseda.

“By replacing our thirsty lawns with California friendly landscaping, the City of Los Angeles is leading the way and educating Valley residents on the range of options for turf replacement, while saving the City water,” said Blumenfield. 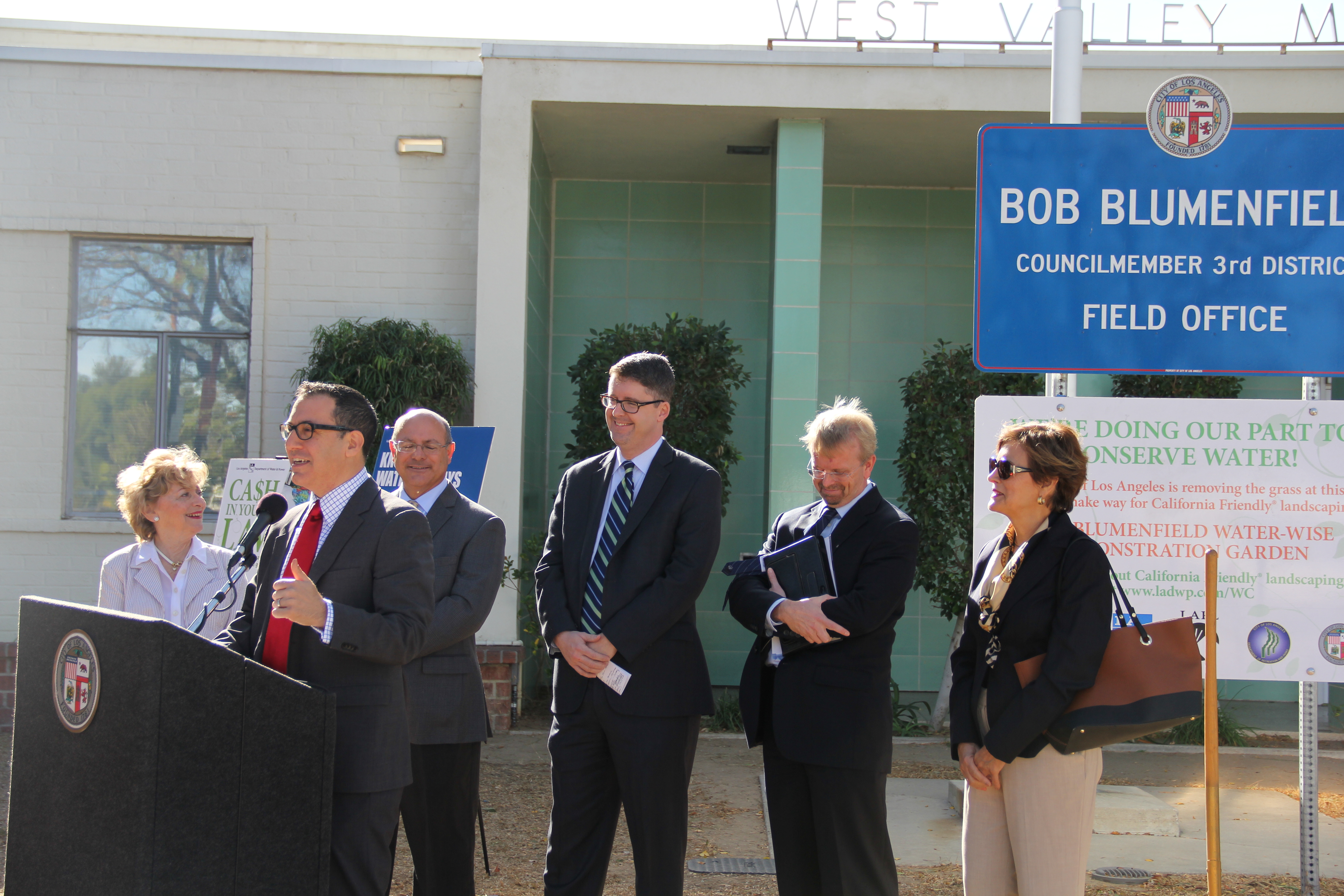 By showcasing different styles and plant alternatives, the new garden will guide and inform local residents in their efforts to remove thirsty turf, while lowering the City’s overall water use in a time of unprecedented drought conditions.

The West Valley Municipal Center houses Councilmember Blumenfield’s Reseda District Office, and locations for 5 City departments. The surrounding West Valley community has a high water use for turf on large single family residential lots but has had a relatively low participation in the rebate program.

Blumenfield began discussions on how best to reduce the Municipal Center’s water footprint shortly after taking office in July 2013. Mayor Eric Garcetti recently announced an expansion of California friendly landscaping at City facilities as part of his recent executive order that seeks to cut citywide water usage by 20%.

“As the City works to reduce its usage, there is no better place to start than here at the West Valley Municipal Center,” said Board of Water and Power Commissioner Jill Banks Barad. “I’m excited for Valley residents to be able to see the variety of options available to change their landscaping and save water.”

The Los Angeles Public Library West Valley Regional branch is a project participant and will incorporate educational exhibits and programming to expand the outreach for the project.

“This is not only about water conservation here at the Municipal Center and Library,” said Chief Librarian John Szabo. “It’s about the decisions we hope people in the Valley and across Los Angeles will make about water conservation and habits that adults and children develop as the result of educational programs the West Valley Branch Library and at libraries throughout the City.” 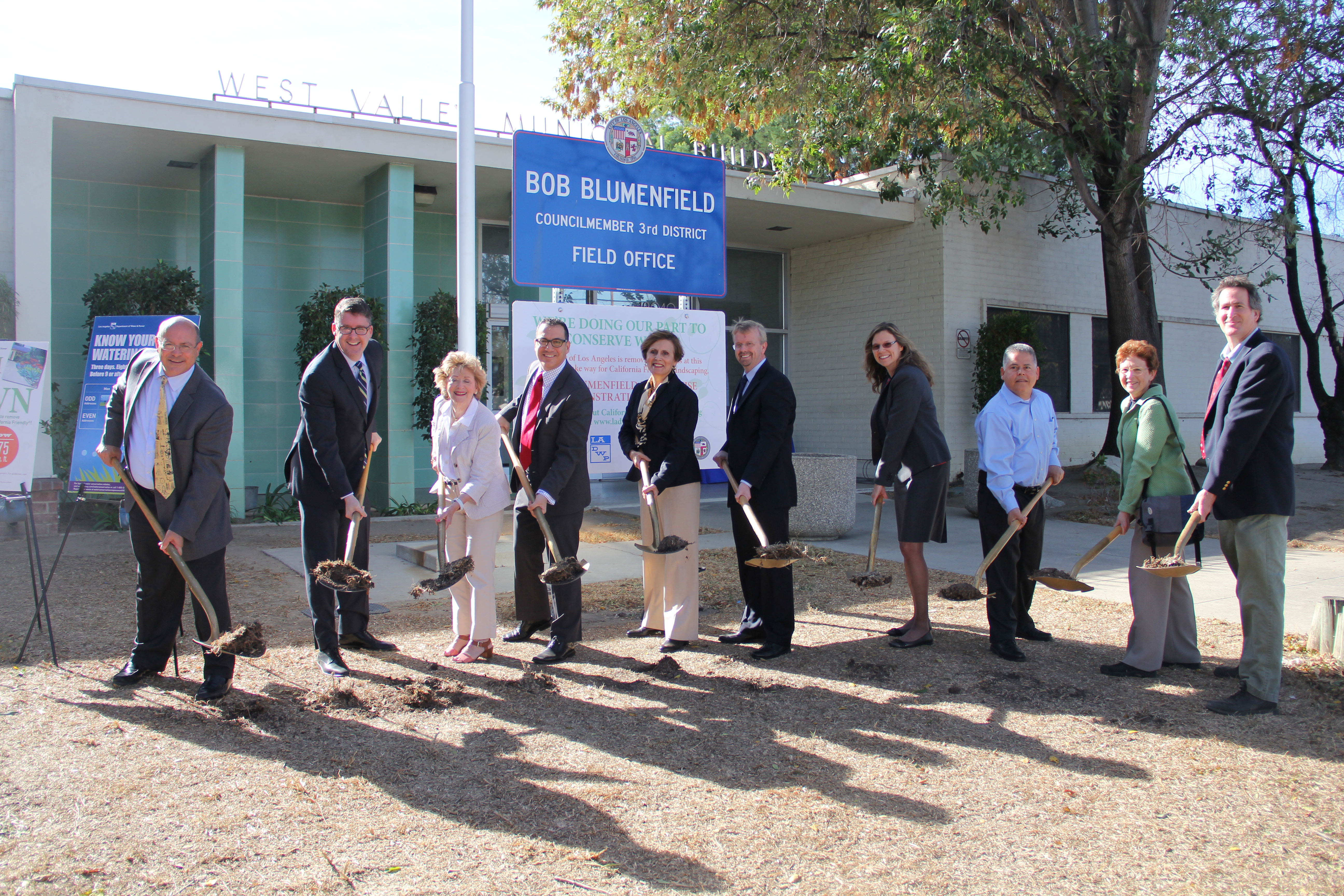 "The Department of Recreation and Parks recognizes that as the population in Los Angeles continues to grow, our water table continues to shrink and our water resources will become ever more precious," said Michael A. Shull General Manger, Recreation and Parks. "Using smart irrigation techniques and materials as an alternative for gardens and lawns will result in a substantial decrease in water consumption."

“LADWP is excited to showcase this West Valley re-landscaping project that will save about 890,000 gallons of water each year,” said Marty Adams, Deputy Senior Assistant General Manager for the LADWP Water System. “Turf removal and replacement with water-wise, California Friendly landscaping and plants will help our city meet its water conservation goals and still provide a beautiful environment for our families.  About half of all home water use is for outdoor landscaping, and this project alone will save enough water to supply almost six families for an entire year.  Imagine the savings in water and money possible if people cashed in their lawns all over the city!”

This summer, Blumenfield took similar steps at his Woodland Hills home, replacing 1,750 square feet of turf with California friendly landscaping. In October, Blumenfield introduced legislation that would add environmentally friendly artificial turf to the menu of options available to Angelenos interested in replacing their parkways with low water alternatives.