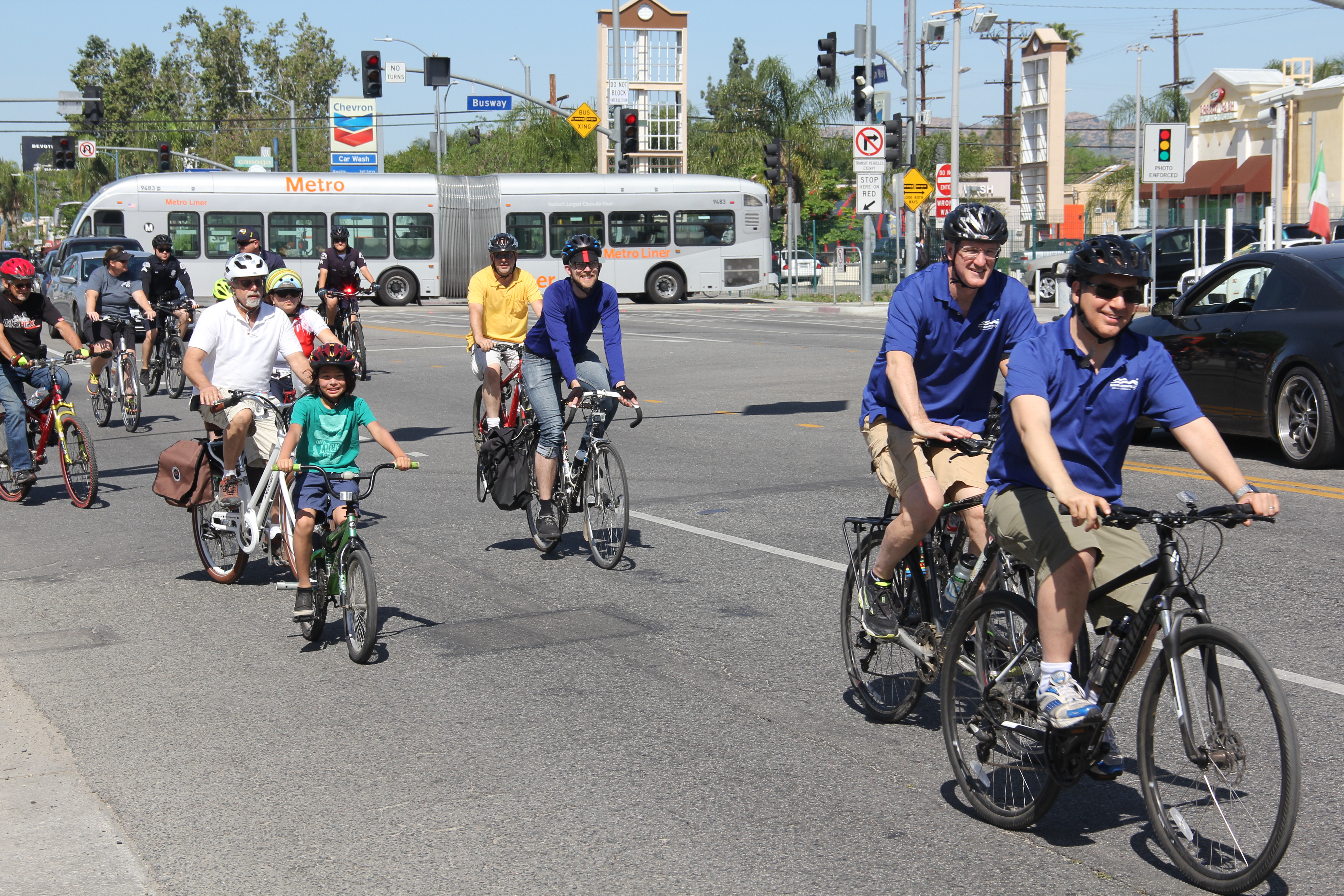 On April 22nd, Councilmember Bob Blumenfield led the 4th annual Blumenfield Community Bike Ride through the West Valley. Highlighting Reseda, Canoga Park, Winnetka and the Los Angeles River, over 70 riders enjoyed some of the hidden beauties of the community that are most appreciated on two wheels.

“Every year I look forward to this event because it blends health, bike safety, civic engagement, and brings people of all ages together,” said Blumenfield.

This year groups and organizations such as Los Angeles County Bicycle Coalition, RiverLA, the Mountains Recreation and Conservation Authority, Vision Zero, and the Bureau of Engineering joined Blumenfield to provide information about exciting projects and new ways to help better our community.

Blumenfield especially thanks the officers from LAPD West Valley and Topanga Divisions that helped make sure that the ride was safe and fun.

More photos from the ride can be found here.

Below: One of the hidden gems that the ride highlighted was the Aliso Creek Confluence Park in Reseda along the LA River. 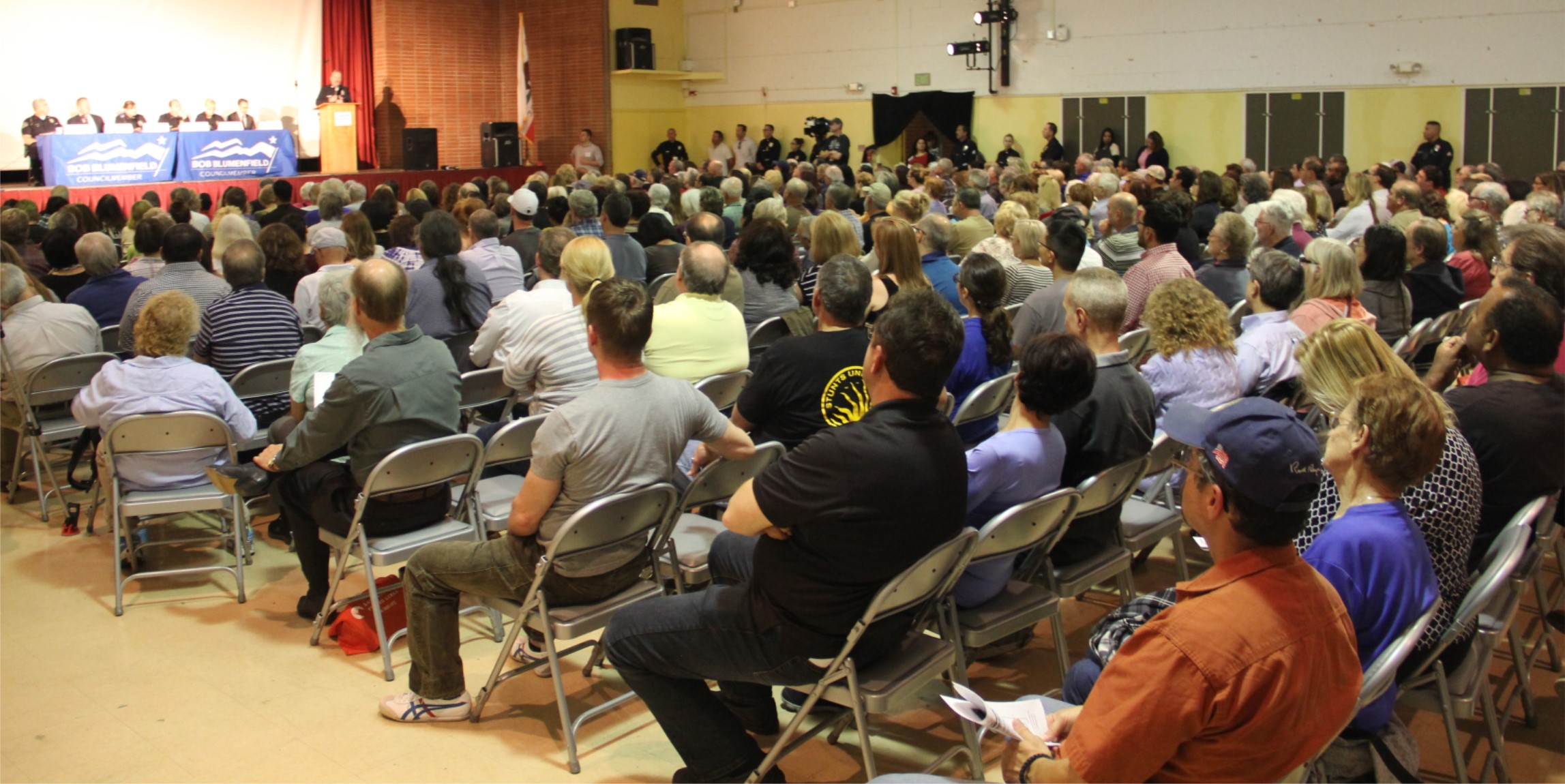 “Over the last few years crime has ticked up and it is vital that community members, LAPD, and elected officials come together, work with the same set of facts, and ensure that our neighborhoods are safe,” said Blumenfield.

Though crimes in the West Valley have gone up recently, crime rates remain significantly lower than record highs 15 years ago. For example, in 2002, there were 58,000 crimes in the San Fernando Valley. In 2014, there were 32,000. But since then, that number grew to 39,000 last year. Burglaries have been going up through the district. The Topanga Division has seen an increase from 901 in 2014, to 980 in 2015, to 1041 in 2016. The same applies for the West Valley Division where in 2014 there were 860, 995 in 2015, and 1095 in 2016. But, since the beginning of 2017, there have been two burglaries a week south of Ventura Boulevard compared to four a week this time last year. LAPD has been working to solve knock-knock burglaries and encourages local residents to take precautions such as motion triggered lighting, double checking locks, and  joining neighborhood watches,

Due to the two hour time constraint, many audience submitted questions were left unanswered by the panel. Blumenfield and his staff answered all of those questions which can be found here. If you wish to view the town hall meeting in its entirety, click here. 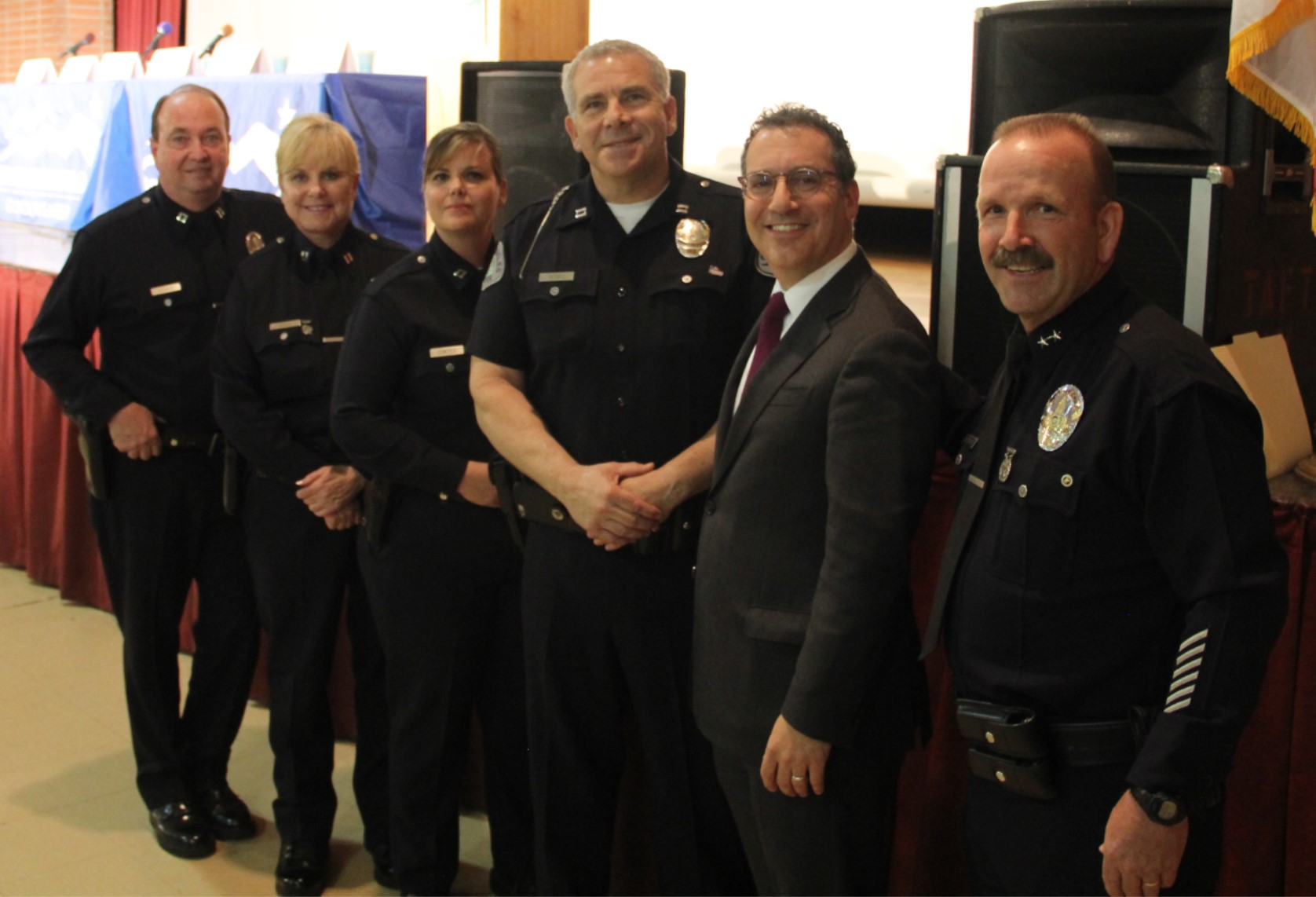 It is budget season once again in City Council. As a member of the Budget and Finance Committee, Councilmember Blumenfield and his staff are carefully going over Mayor Garcetti’s proposed budget and are questioning every General Manager of City departments about their needs and finances.

“The City budget is not just about funding programs and departments. It is a public declaration of the priorities of Los Angeles,” said Blumenfield. “As we go through this process, I want to hear from all of my constituents about what their budget priorities are what they believe should get more funding.”

Blumenfield’s annual budget survey is currently live on his website at http://blumenfield.lacity.org/budget_survey_2017. Also, all Budget and Finance committee meetings are streamed live here.

On April 24th, Councilmember Blumenfield joined the Public Works and Gang Reduction Committee to explore how best to combat gang activity in the West Valley. Last month, per Blumenfield’s request, the Police Commission and the Mayor’s Office of Gang Reduction and Youth Development (GRYD) released a comprehensive report focusing on the rise of gang activity in West Valley communities and what is being done to intervene.

“The report was the first step,” said Blumenfield. “Now we need to use that data and find creative ways to fight gangs that have grown in the West Valley.”

Blumenfield said, “There are a lot of people out there who think that the West Valley is gang free, they are deeply mistaken. Not only must we fight those gangs head on but we must ensure that our children have good prevention programs and healthy after school opportunities that divert kids from becoming gang members.”

GRYD zones offer numerous preventative tools that have a direct impact on the communities they serve including education campaigns, gun buy-backs, and seasonal programs that are tailored for unique neighborhoods. One of the most successful programs they operate is ‘Summer Night Lights,’ bringing community members and local police together for evenings of entertainment. Currently they are exploring ways to add ‘Fridays in the Fall’ to provide more opportunities to meet and form relationships between youth and at risk families.

Blumenfield requested that GRYD report back on the process and financial impacts of either expanding the current GRYD zone in the Topanga Division to include the West Valley Division or establishing a new one.

On April 18th, Councilmember Blumenfield kicked off the Trade Connect Exporting Workshop in the West Valley. This event brought leaders from the United States Department of Commerce, the Import-Export Bank of the US, the United States Small Business Administration, Los Angeles World Airports, Los Angeles Customs Brokers and Freight Forwarders Association, and the Port of Los Angeles to the West Valley to share their expertise on how to grow jobs locally through international trade.

“As chair of the committee that oversees the Port of LA and LA’s Airports and as someone who is constantly trying to help create more good paying jobs, I have made it one of my missions to help businesses find resources to expand,” said Blumenfield. “Trade Connect is a one stop shop for information and insights that help small business owners grow their companies.”

Blumenfield was proud to introduce Wendi Levy, owner of Canoga Park based Mixed Chicks, who makes specialty hair products and has benefited from exporting internationally.

"JENSON" (ID # A1693474) - Jenson is a 3 year old Miniature Poodle weighing a teensy 10 pounds. He arrived at the shelter with lots of mats, so a volunteer shaved him down and presto!  He loves people and gets along very well with the small dogs sharing his kennel.  Jenson loves to give kisses and rolls over on his back for belly rubs. He just wants love and to give love.  Jenson has a very great demeanor and will be a great addition to any family.

"MAGGIE" (ID # A1691548)- Just 2 years old, Maggie has a has a gorgeous coat of classic brown Tabby Stripes mixed with beautiful reds and Tortie swirls, with giant green eyes gleaming with curiosity.  Maggie likes to meet people slowly -- then she comes right up to the front of her cage giving you her happy "Hello!" Maggie's personality will shine in a quiet home with lots of love.  Maggie needs to be an indoor-only kitty so she can stay safe. 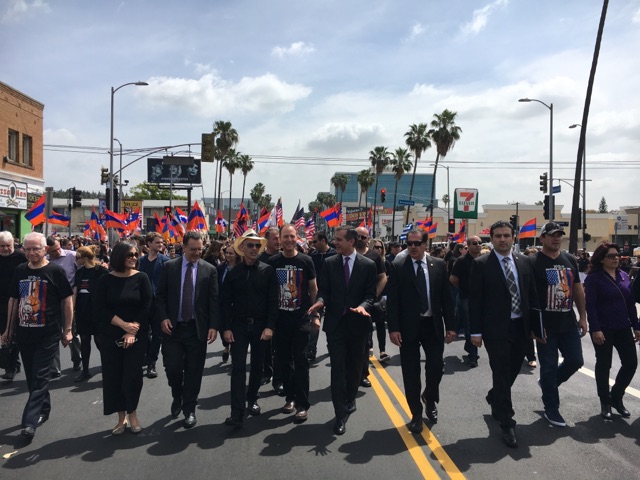 On April 24, Blumenfield joined Mayor Garcetti, Councilmember Mitch O'Farrell, Congressman Adam Schiff and thousands of Angelenos for the March for Justice to support the recognition of the 102nd anniversary of the Armenian Genocide. 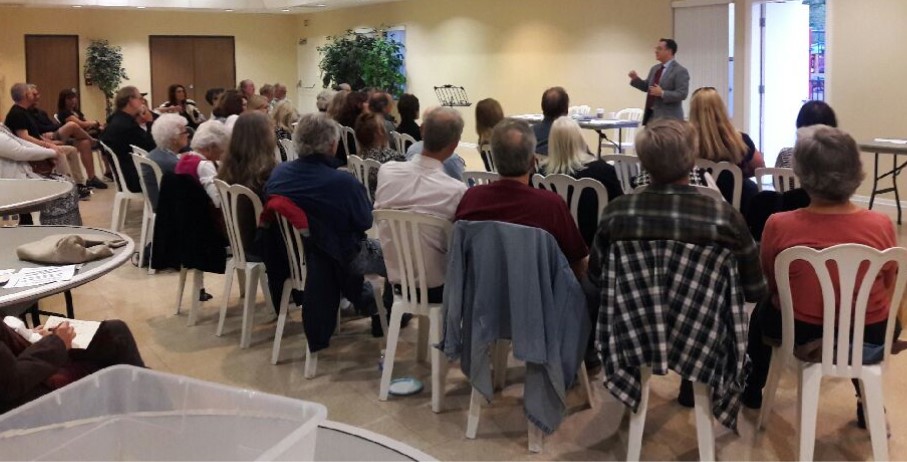 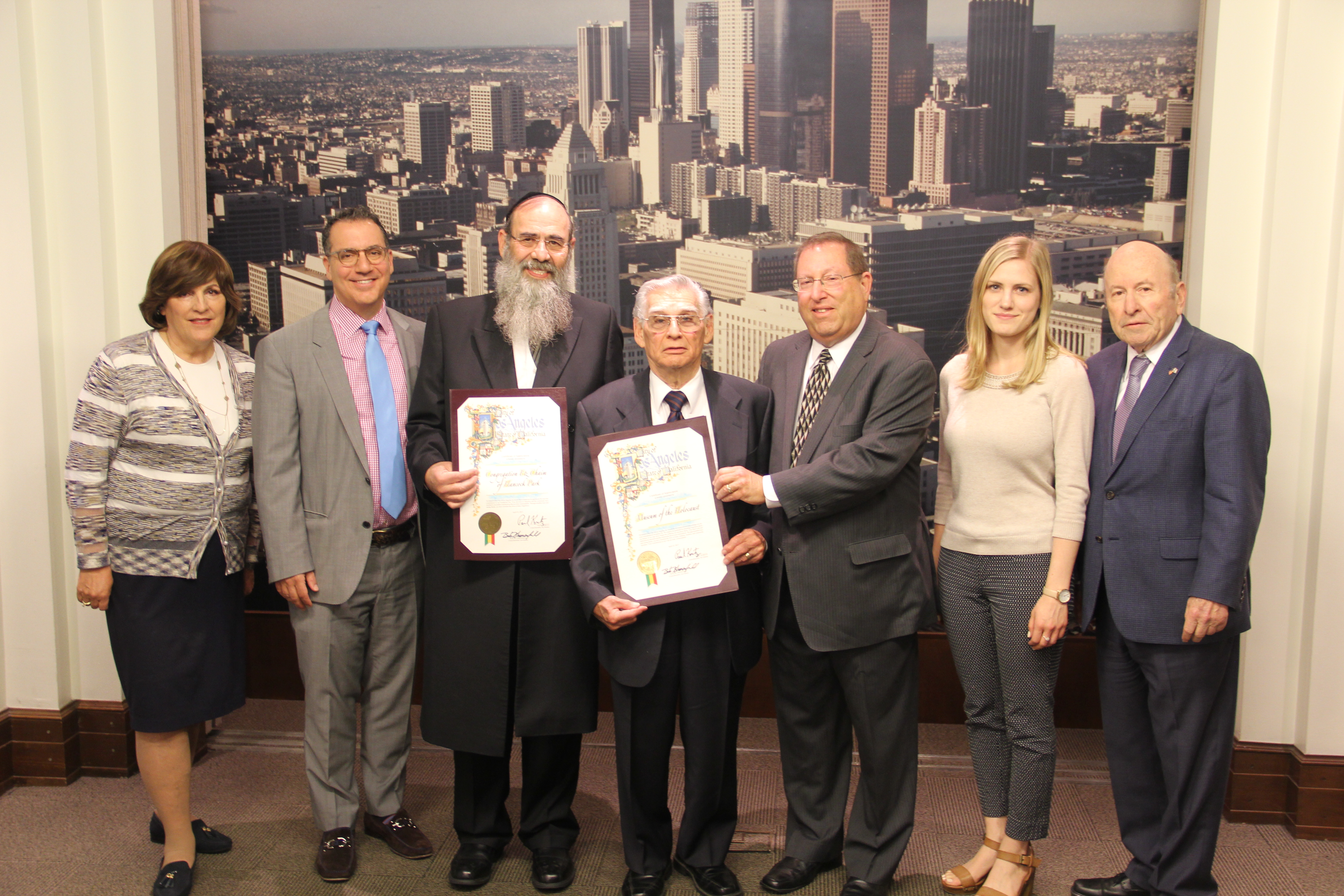 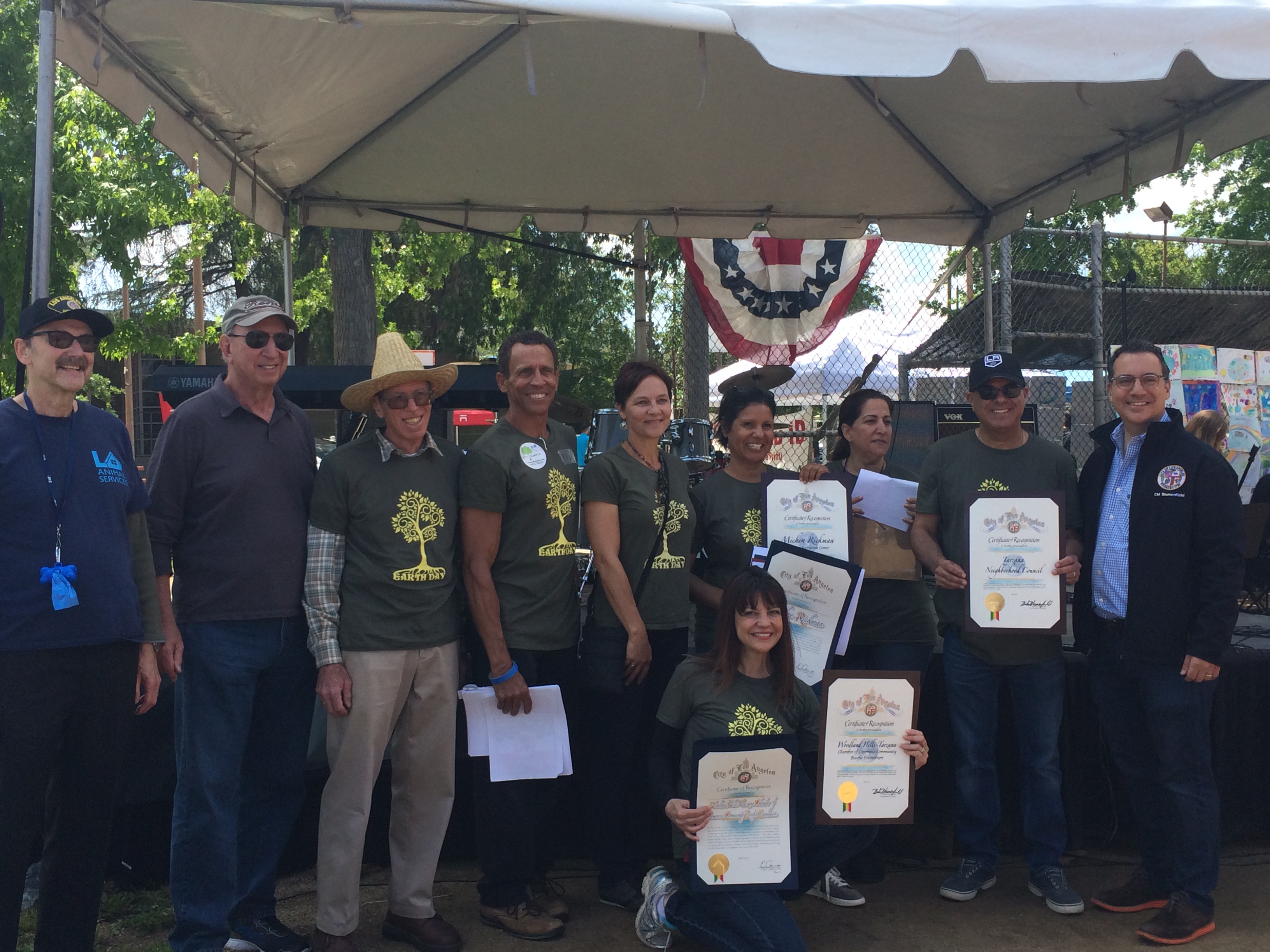 On April 8, Blumenfield celebrated Earth Day in Tarzana and recognized the team that puts this annual event together including Michon Rickman for the Department of Recreation and Parks, Diana Williams and Felicia Paust from the West Valley-Warner Center Chamber of Commerce and neighborhood councilmembers Jeff Mausner, Harvey Goldberg, David Garfinkle, Elliot Durant, Terry Saucier, Esther Weider and Eran Heissler. 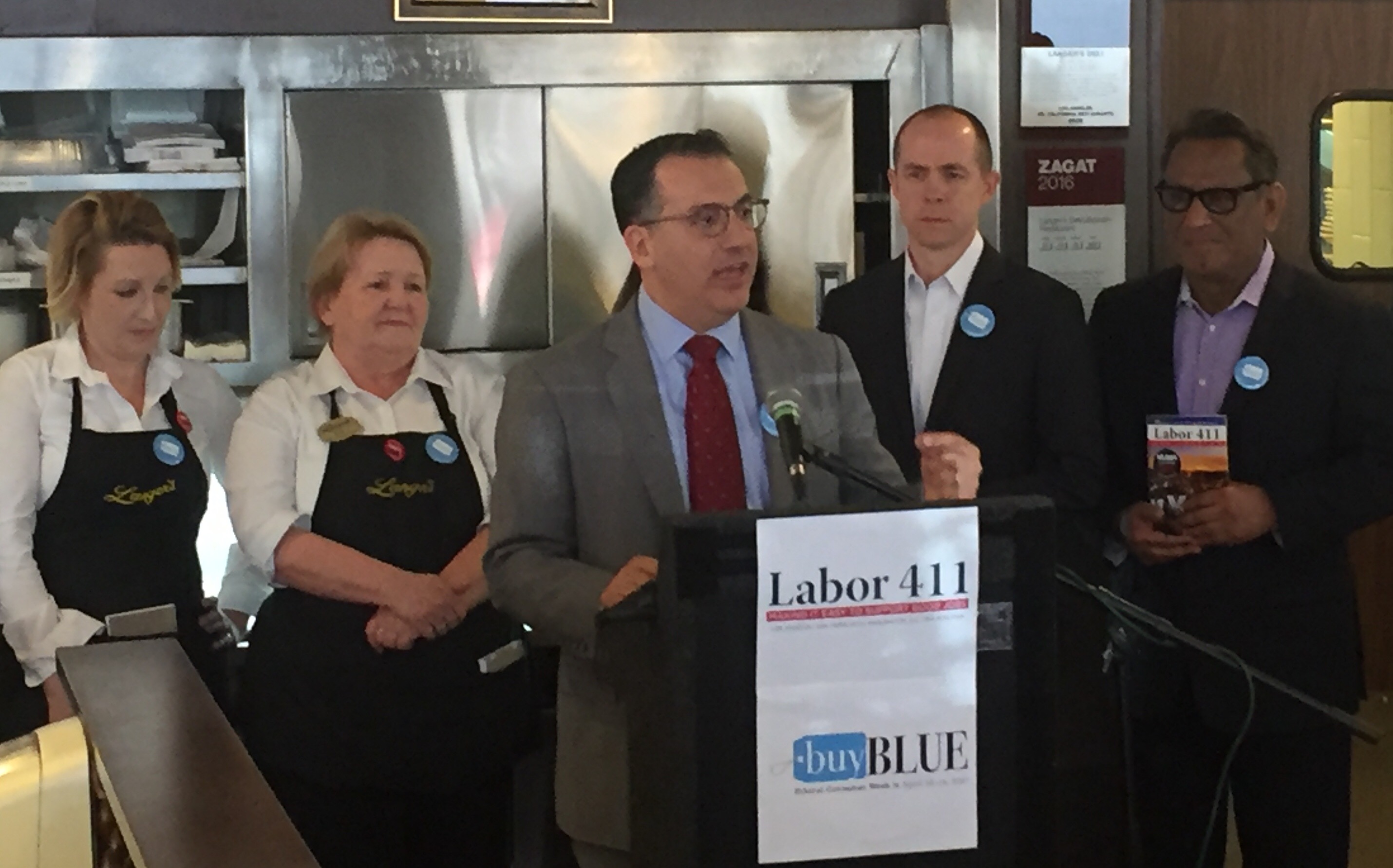