From LAPD: Beware of people claiming to be DWP, telemarketers, and escrow agents, who ask for money.

Beware of anyone claiming to be a DWP worker, telemarketer, escrow agent, or anyone who call or come to your door and ask for money.

Before you give anyone money or your credit card info get their info then contact the company they're claiming to be from.

This weekend, a devastating fire destroyed the San Fernando Valley Rescue Mission’s emergency shelter, vehicle fleet, and clothing and food warehouse. The fire started just before 1 a.m. Saturday at a wood pallet warehouse adjacent to the shelter on Saticoy Street and took Los Angeles City firefighters over an hour to get the flames under control. 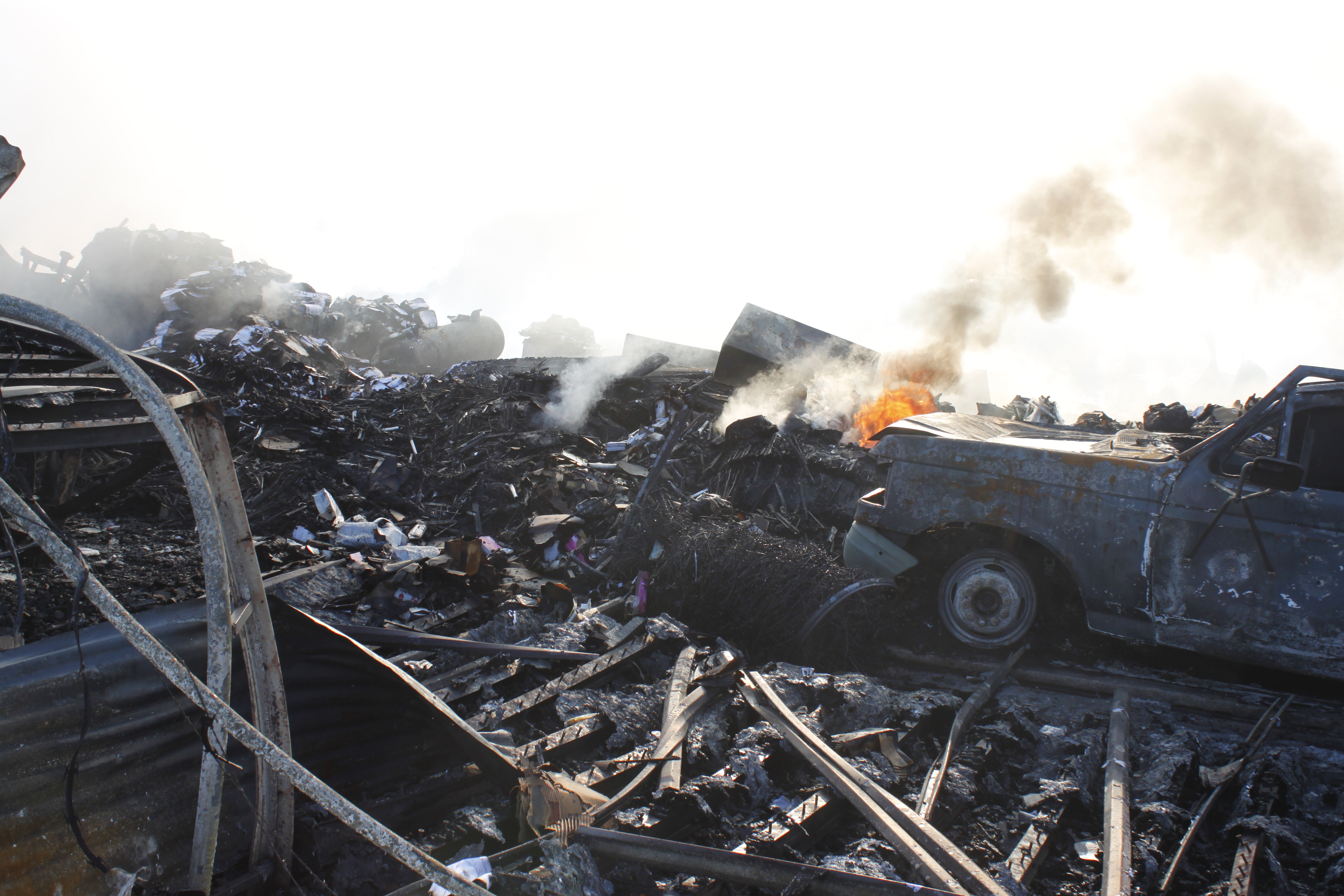 With so much damage done, the Mission needs the community's help to rebuild. Cash donations are the most vital right now and may be made by visiting the Mission’s website here. Trucks and temporary storage containers are also needed to continue the Mission’s work without interruption. Other items critically needed include blankets, clothing, small household items and personal hygiene items.

Donated items can be dropped off to the Sun Valley Thrift store at 9007 Lankershim Blvd, Sun Valley, CA 91352 between hours of 9am–6pm daily or at Councilmember Blumenfield's office at the West Valley Municipal Center at 19040 Vanowen Street, Reseda, CA 91335.

The destruction of the Mission’s vehicle fleet will seriously impact the emergency mobile program, which travels to six distinct areas of the Valley each week equipped with its mobile shower unit, hot nutritious food, and clothing and hygiene items for distribution. Each month, the SOS program serves an average of 1,500 men, women and children and provides over 1,500 meals, 1,400 items of clothing, 300 showers, and 400 hygiene kits.

Earlier this month, Mayor Garcetti unveiled his proposed budget for Fiscal Year 2014-15, his first as Mayor, available for your review here.

Today at 1pm, the City’s Budget and Finance Committee, of which I am a member, will begin a three week process of reviewing the proposed budget with the first of a series of a hearings. A link to the budget hearing schedule can be found here.

In a budget survey sent out last month, I asked you to let me know your priorities for the City’s upcoming budget. I received hundreds of responses, and despite a diversity of ideas, a clear consensus emerged: we need to remain focused on growing and improving the City’s physical and environmental infrastructure to make LA a safe, clean, green and friendly place for people and businesses while ensuring our long-term, fiscal sustainability. A visual representation of what you told us can be found after the jump.

The City of Los Angeles’s budget for everything we do is approximately $7.2 billion. We are facing a $242 million structural deficit entering the next fiscal year which begins on July 1. A “structural deficit” fundamentally means that our expenses (money going out) are outpacing our revenue (money coming in). Because the City can’t continue to live beyond its means, I need your input on what is most important as the Council faces tough budget decisions this year.

Please know that I will continue my concerted efforts to make City government more efficient, cost effective, transparent and rooted in performance measures and metrics. However, despite ongoing successes in this realm, and more expected, the budget choices we have to make cannot be completely averted.

Please take the survey below to let me know your budget priorities, thoughts and concerns for the upcoming budget.

During an extensive community outreach effort in your neighborhood, I heard overwhelming support for converting the former Fire Station at the corner of Canoga Avenue and Costanso Street to a small community park or what many call a "parklet". Following this important community decision, I hosted a design charrette. This meeting allowed the community to work collaboratively with the City to mold and shape the plans for the future park and to hear and address issues and concerns. Thank you for your input during this important process.

Starting yesterday and lasting through the end of the week, the Bureau Street Services Pavement Preservation Division will be pouring some 94,700 gallons of slurry seal in two areas in Council District 3.

Street work will occur in the area between Rod Ave. and Platt Ave., from Sylvan St. to Calvert St. and between Le Sage Ave. and Fallbrook, from Victory to Calvert St.

Do you have questions about the City’s role in the Village at Westfield Topanga Project? So did I. That’s why I worked day and night to help craft a fair deal for taxpayers that will create jobs and economic opportunity here in the San Fernando Valley. Below, please find some of our most Frequently Asked Questions about the project and subvention.

What is a “subvention”?

A subvention agreement provides for a mechanism by which site-specific tax revenue can be used by the City to provide financial assistance to a project to bridge the feasibility gap in its construction cost to help build the project. As per City policy, up to 50% of the net new tax revenue (general fund revenue) generated by a project may be used to assist a project through subvention.

Net new revenue? What does that mean?

Net new revenues refer to tax revenues the City would not get unless such a project was built.

Okay, got it. What’s a feasibility gap?

A feasibility gap is the difference between what the project costs to build and the revenues expected to be earned. Put another way, it is the additional financing needed to make the project viable.

City officials hoped to make a statement to the Iranian government last Friday, when the Los Angeles City Council voted to prohibit entities that do business with Iran’s energy sector from pursuing local government contracts.

The vote brought the city into compliance with the Iran Contracting Act of 2010, which was authored by then-Assemblymen Mike Feuer and Bob Blumenfield. The two have teamed up again to ensure that the legislation is implemented at the city level.

“We’re going to send a strong message to the Iranian regime that until they give up all aspirations for developing nuclear weapons, the United States will use every arrow in our quiver to prevent that from happening,” said Blumenfield, who now represents the council’s 3rd District. “And crucially, today’s action provides much needed peace of mind for all Angelenos, that their tax dollars will never be party to a nuclear Iran.”

JEWISH JOURNAL: What I learned from Henry

Following Rep. Henry Waxman's announcement that he would be retiring at the end of his current term, Councilmember Blumenfield penned an op-ed for the Jewish Journal, offering personal reflections on Rep. Waxman's remarkable career and their long friendship:

The news that Congressman Henry Waxman would not seek re-election to a 21st term has sent shockwaves through Los Angeles. From the environmental and health activists for whom Waxman was a hero, to the pro-Israel community where he was one of the most important allies in Congress, many are mourning the loss of a great advocate for California communities in Congress, and wishing him well as he enters the next phase of a career that has been of remarkable consequence to all Americans. For me, it has been an opportunity to reflect on my personal experiences working alongside Congressman Waxman, first as a Capitol Hill staffer, and more recently as an Assemblyman and member of the Los Angeles City Council.

Elected to the California State Assembly in 1968, and then to Congress in 1974, Henry Waxman is one of the finest legislators, not only of his generation, but to have ever served in the United States House of Representatives. His retirement is a loss, not merely to our City, our State and our Country—but to the very body to which he dedicated 40 years of his life.

Few, if any legislators, have had the kind of meaningful, significant impact on the diverse range of issues that Congressman Waxman has had.

When I came to Washington in the late 1980’s Waxman was the powerful chair of the Energy and Commerce Subcommittee on Health and the Environment, and already a legend in the hallowed halls of Congress. First as a senior staffer for Congressman Howard Berman, and more recently as a member of the California State Assembly and the Los Angeles City Council, I witnessed Waxman’s style up-close, as he championed causes ranging from health and the environment, women's and gay rights, to strengthening the ties between the United States and Israel. I was working on the Hill when he famously forced the chief executives of seven major tobacco companies to swear under oath that nicotine was not addictive. He barely broke a sweat.

Please be advised that Coldwater Canyon will be closed from Moorpark St. to Ventura Blvd. on Saturday, February 1, 2014 from 8 a.m. to 1 p.m. as replacement of the 100 year-old City Trunk Line project continues.

Traffic will be impacted, particularly for those using Coldwater Canyon as an alternative to the I-405.

More info From the LADWP after the jump: